Resistance to tuber rot by Botryodiplodia theobromae in relation to tuber phenol and proximate content was investigated in this study in variety Agbodo of Dioscorea alata and varieties Oniyere, Iseosi and Abuja of MD. rotundata. The four varieties harvested from a field plot where they had been fertilized with an 8-mineral content fertilizer (Bounty), were incubated with B. theobromae for 4 weeks along with their counterpart (the same four varieties) sourced from farmers’ plots. The experiment was a 4x3 factorial, with 4 main factor treatments (variety), 3 subfactor treatments of 0.6ml l-1 and 1.2ml l-1 Bounty fertilizer, and farmers’ plot tuber (FPT). There were 3 replications. Only the fertilized tubers were analyzed for phenol and mineral content in a 4 by 2 factorial experiment, as resistance to tuber infection by B. theobromae had correlated significantly with phenol and mineral uptake in white guinea yam (unpublished). Mineral fertilizer effects in infection (2.27%) and weight loss (2.11%) was evident as both were 97% lower and 67% lower respectively than those recorded for two improved Dioscorea varieties fertilized with calcium carbonate in literature. However, 0.36% (infection)/0.49% (weight loss) of FPT tubers were significantly lower than those of the fertilized tubers. Lower moisture and higher phenol content in Oniyere did not reflect in lower weight loss or infection than the other varieties. Analysis of tuber phytochemicals including phenol/phenolic compounds generally as well as minerals in the tuber which are all implicated in infection reduction should explain varietal response.

Yam Dioscorea species is a staple food in the tropics and humid regions of the world. Major production is in West Africa and Nigeria had been the world’s largest producer for several decades. The importance of yam is exhibited in it being a food security and income generating crops, as well as one with components useful for pharmaceuticals. Yams also display a variety of uses socially and in ethnic religion in many areas of the world such as West Africa where some species are Indigenous, such as the guinea yams (D. rotundala Poir and D. cayenensis Lamk.) Dioscorea alata, water or greater yam is popular along with the white and yellow guinea yams in Nigeria. Higher levels of protein as well as various Vitamins and minerals make yams more nourishing than cassava - the poor man’s food. Production is more labour intensive than for cassava and constraints therein makes it lag demand both locally and in international foreign markets. Major losses in stored tubers are caused mainly by fungi [1] such as Aperpillus species, Penicillium species, Botryodiplodia theobromae, Rhizopus nodulans and R. stolonifer among others. These annually losses in millions of metric tons weight was estimated at 7million [2]. Minerals nutrition for disease resistance remain relatively cost effective than chemical control with attendant-environmental/health hazards [3]. This study investigated the response of 3 common white guinea yam varieties and 1 water yam variety in South West Nigeria to infection after mineral fertilization, compared to these same varieties sourced from farmer’s plots. The objective of the study was:

a) To determine phenol and proximate content in bounty-fertilized D. rotundata vars Oniyere, Iseosi and Abuja and D. alata var. Agbodo, after incubation with Botryodiplodia theobromae for 3 weeks.

b) To relate phenol content and moisture in the fertilized tubers to infection and weight loss, after incubation with Botryodiplodia theobromae.

One set of tubers of the three varieties Oniyere, Iseosi and Abuja of Dioscorea rotundata and var. agbodo of D. Alata were sourced from a yam project plot at the Teaching and Research Farms of DUFARMS (Directorate of University Farms), Federal University of Agriculture, Abeokuta, Ogun State, Nigeria. The tubers had been fertilized in the yam project plot with bounty fertilizer containing eight minerals namely Calcium 7% w/w, Magnesium oxide 0.50% w/w, manganese 1% w/w, Iron 2% w/w, Zinc 2% w/w, Copper 0.50% w/w, Boron 0.0025% w/w, and Nitrogen 15% w/w. Rate of fertilization was 0.60 ml l-1 and 1.20 ml l-1 of Bounty fertilizer. Another set of the four varieties were sourced from farmers plots within Ogun State (South West region of Nigeria).

A 4 by 3 factorial experiment was carried out arranged in RCBD (randomized complete block design) with 3 replicates. Main plot factor was variety (four) and the 3 subplot factors were fertilizer namely 0.60 ml l-1 bounty fertilizer, 1.20ml l-1 bounty fertilizer and no bounty or farmers plot tuber (FPT). Tubers were inoculated with a 5mm agar disc of a 7-day old pure culture of Botryodiplodia theobromae. The 5mm discs of B. theobromae were introduced into the surface sterilized tubers with sterilized scalpel, forceps and 5mm cork borers; after 10-12mm deep holes had been made in the tubers with sterilized 6 mm cork borers. The inoculation site of each tuber was sealed with pure petroleum jelly after the cut-out tissue had been inserted into the hole. Arrangement of inoculated tubers was in ventilated, wire-netted wooden yam storage structures inside the COLPLANT (College of Plant Science and Crop Production), Federal University of Agriculture (FUNAAB) screenhouse for 3 weeks. Tubers were weighted before inoculation with a top loading mettler balance. After 3 weeks, weights of the tubers were again recorded. The infection site on each tuber was cut open after the Vaseline was cleared with spatula and cotton wool, with a steel knife. Infected tissue was carefully removed with a sharp scalpel on to pre-weighted aluminum foil. Infected tissue weight was determined with an electronic balance.

Where X = weight of infected tissue and Y = % Weight loss.

And A = Weight of tuber before inoculation.

Table 1: Infection and weight loss in two Dioscorea spp. (four varieties) from a Bounty-fertilized yam plot and from farmers’ plots after 3 weeks incubation with Botryodiplodia theobromae. 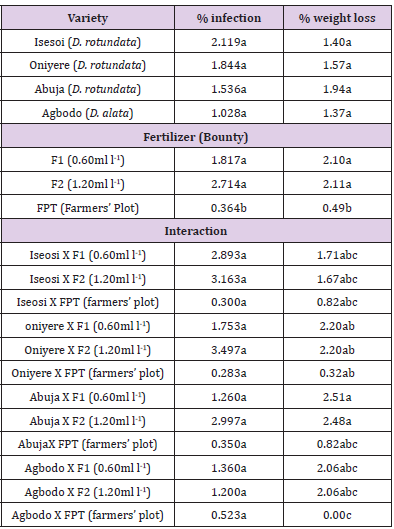 Means in any column followed by a common letter are not significantly different at P = 0.05 (Tukey’s test). 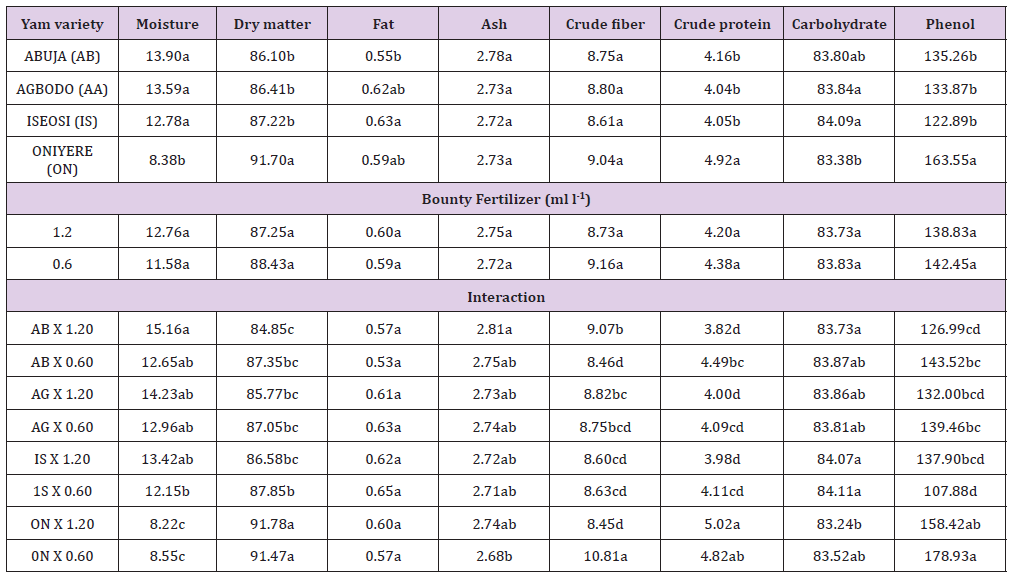 Means in any column followed by a common letter are not significantly different at P = 0.05 (Tukey’s test)

Proximate and phenol content is compared only in the tubers fertilized with an 8- mineral component (Ca, N, MgO, Mn, Zn, Cu, Fe, B) fertilizer namely Bounty. This is because resistance to the tuber rot pathogen B. Theobromae had been observed to correlate significantly with mineral uptake in white guinea yam (unpublished). However, both infection and weight loss were lower in the tubers from farmers plot (not Bounty fertilized) than in the bounty-fertilized tubers. Phenolics are often implicated in the resistance to microorganisms in plant species [5]. Phenol content was highest in variety Oniyere, but this did not reflect in a lower tuber infection compared to the other three varieties. But generally low infection of below 2% was recorded for each of the four varieties. Variety x fertilizer effects showed 0% weight loss in Agbodo x FPT and it was significantly lower than Oniyere x 0.60 fertilizer, Oniyere x 1.20 fertilizer, Abuja x 0.60 fertilizer and Abuja x 1.20 fertilizer all of which had weight loss of over 2%. Dioscorea alata is reported to have a longer storage of the fresh tubers than white guinea yam, [6]. D. rotundata. Lower moisture content has been reported to enhance/prolong shelf life in Dioscorea alata [7]. Moisture content in all four varieties in this study was over 8% and was lowest in the white Yam Oniyere. Low moisture commensurate to low infection or low weight loss may be varietal as the cited report recorded moisture levels of only 6% in the varieties of water yam studied [7]. Analysis of total phenolic compounds and minerals which are all implicated in reduction of infection/disease [3,8] should explain varietal responses or response of tubers (storage organs) to pathogenic infection. However, mineral nutrition effects in reducing disease is evident as infection and weight loss in this study are only 97% and 67% respectively of that in a previous report, where Calcium carbonate reduced both infection and weight loss in three improved varieties of white and water yam (Dioscorea species) [9].