According to WHO report: “Many ecological studies report an inverse (i.e. protective) association between cardiovascular disease mortality and water hardness, calcium or magnesium levels; however, results are not consistent” [1]. In Finland clinical symptoms of CHD (coronary heart disease or ischaemic heart disease) have been observed to have been associated with groundwater (gw) silicon (Si) [2]: “clear-cut symptoms or ECG signs of CHD”, and Mg/ Ca ratio [3]: “first AMI by men aged 35-74 years”. Cropland Mg/Ca has been discovered not to be associated with CHD mortality of middle-aged men [4] in 1964-84, but it has been reported to have been associated inversely with ratio of cardiac non-CHD mortality to total mortality (Card o./Tot) in whole population [and nonsignificantly (positively!) with [(CHD/Tot] (the numbers were not given)] 1969-2016 [5]. A change in the WHO’s coding rules has reduced pneumonia as an underlying cause since 2005 [6], why this association needs a new assessment by excluding data from 2005- 16. Time-related data on national Mg supplementation of cropland and its rapid change exists from 1972-80 [7], from other periods the data are less precise, even data on 1972 is slightly disputable [8].

About regional quality of liming agents there has not been available quantitative data, anyhow qualitative report from 1956: Distribution of Mg-rich mines and quarries has been different in different areas of Finland. In the 1950’s the production of liming agents with Mg contents 10.3-13.5 % situated in the northern Finland, northward from Joensuu-Kuopio-Kokkola line [9], dotted line in Figure 1. Physiological mechanisms of Mg and Si are mainly overseen in this article. The aim of this study is to represent some regional cropland and gw factors [Si, Mg/Ca, proportion of some soil-types] and their associations with each other and with cardiac mortality (assessed by four parameters), as well as the change of cropland (Mg/Ca) in 6 separate soil-types between periods 1966- 70 (“68”) and 1986-90 (“88”) and the association of long-term dolomite liming on cardiac mortality parameters. 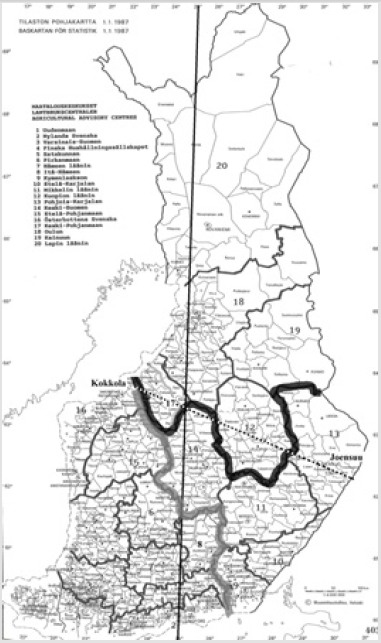 Figure 1: Map of Finland, from [10], with boundaries of Agricultural Advisory Centers (nowadays Rural Centers, RC’s). Dotted line, according to [9], divides Finland roughly to rich (North) and poor dolomite liming (South) zones (before 1976) [7,8]. The dick black line is drawn according to the soil analyses. The grey line shows the usual Finnish East-West division [11]. The straight vertical line shows the meridian of 25 °E.

Figure 1 from [10] represents the 20 administrative units, Rural Centers (RC)-earlier “Agricultural Advisory Centers”. More closely [RC.(04ab) Finska Hushållnings..] is divided into “continental” [(04a).Finska Hushållningssällskapet] and [(04b).Åland] [11]. These 21 RC’s are the source of cropland parameters: Soluble Ca and Mg contents of Fine sand moraine, Finer fine sand, Silt, Sandy clay, Mull, Carex peat and Total, as well as proportions of mineral soil-types. (Table 1) These are provided by Eurofins Viljavuuspalvelu Oy: from 1966-70 (abbr.: “68”) [12] (Table 2) and from 1986-88 (abbr.: “88) [13] (Table 3). Groundwater (gw) Si, (Mg/Ca) values are provided by Geologic Survey of Finland [14] (Table 4). Soil analyses were determined by using acetic acid ammonium acetate buffer (0.5 M, pH 4.65) [15]. Additional administrative units are 19 “Regions” [16], which are more important than RC’s, because a plenty of data are readily accessible by Regions. Regions are rather well overlapping with RC’s. There are a few bigger differences: MK01 Uusimaa is formed in 2011 [16] and is moderately well overlapping with combination of [(01).Uudenmaan] and [(02). Nylands Svenska], as a remark of its data source even labeled by “[(01;02) Uusimaa]”. MK02 Varsinais-Suomi is constituted from RC’s [(03).Varsinais- Suomen] and [(04a) “continental” Finska Hushållningssällskapet]. It is labeled here by “[(03;04a). Southwest Finland]”, too. Cropland area of [(04a) “continental” Finska Hushållningssällskapet] is attained by subtracting area of Åland (in provincial database) from [(04ab) Finska Hushållningssällskapet]. The following Regions after MK02 are MK04 Satakunta, MK05 Kanta-Häme and MK06 Pirkanmaa. In RC databases [(05).Satakunnan] is followed by [(06). 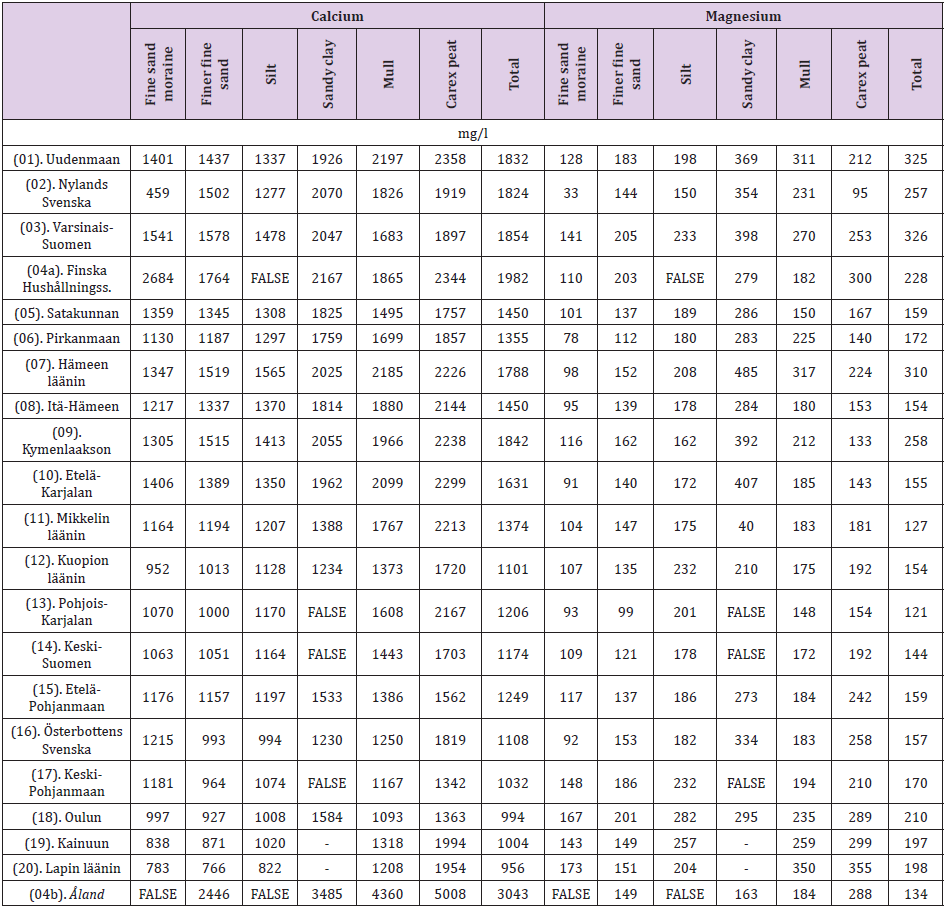 Table 2: Soluble calcium and magnesium contents in different soil-types (and total) of Finnish Rural Centers in 1966-70. After removing unpaired Ca and Mg cells, they and originally empty cells have got value “FALSE” (closer in the text). 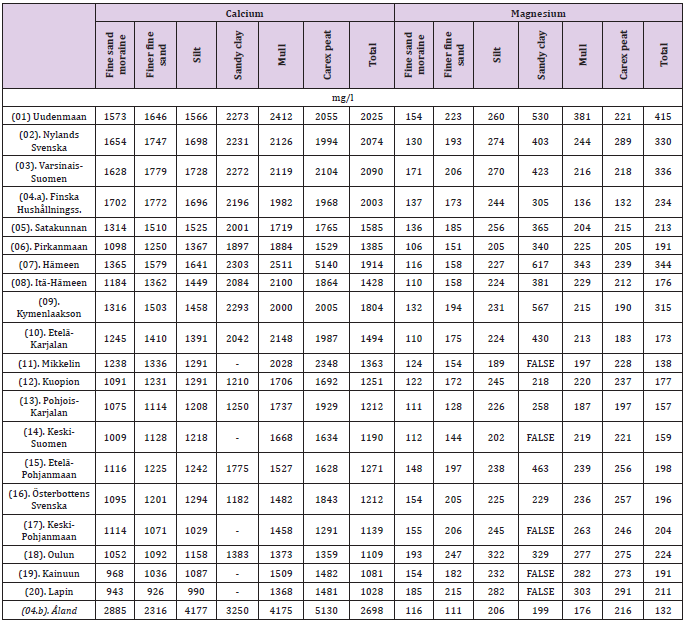 Table 3: Soluble calcium and magnesium contents of different soil-types (and total) in Finnish Rural Centers in 1986-90.

Note: ”-” means that both values are missing. 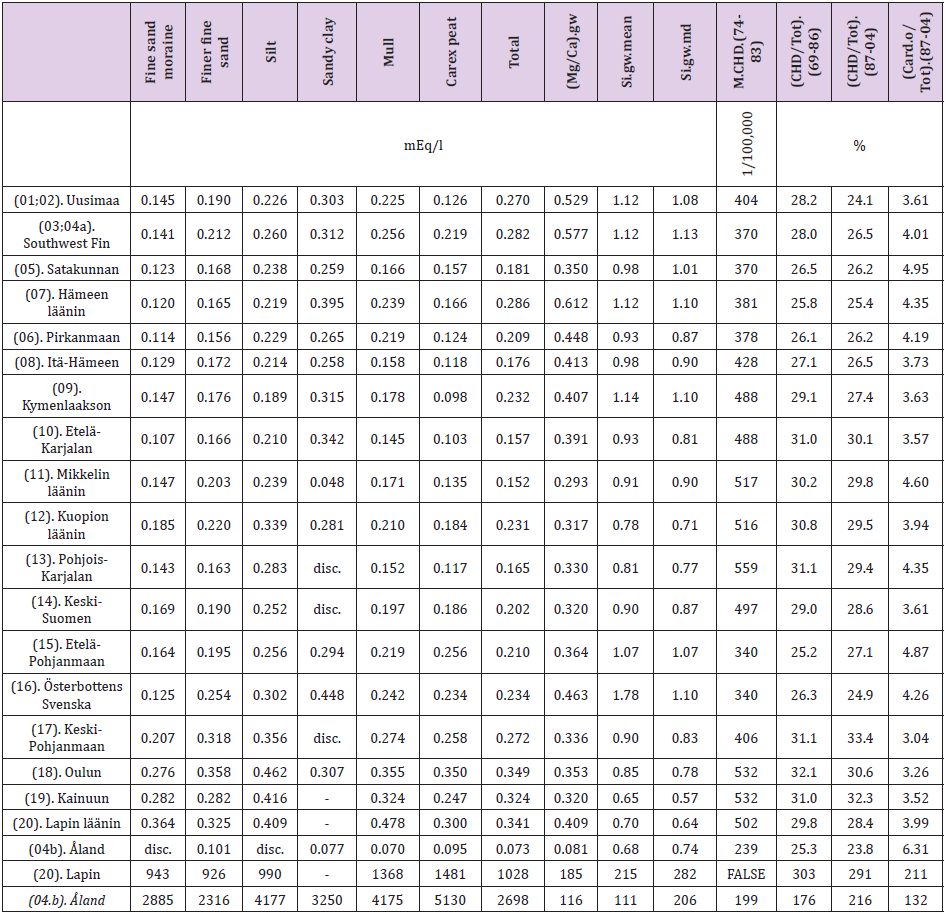 Table 4: Mg/Ca soil values from 1966-70, groundwater Si (mean and median) and Mg/Ca ratio and approximate age-adjusted male CHD from 1974-83 of Finnish Regions after combination data of the first RC’s and directly calculated proportions of CHD and other Cardiac causes of death pertotal mortality (Tot) in given periods (“disc.” = unpaired samples, “-“ = both values missing). 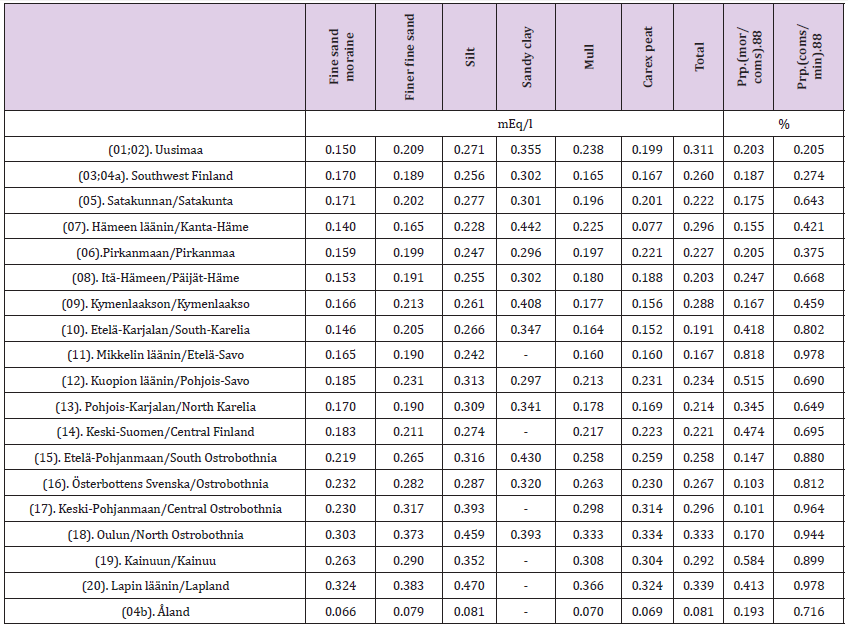 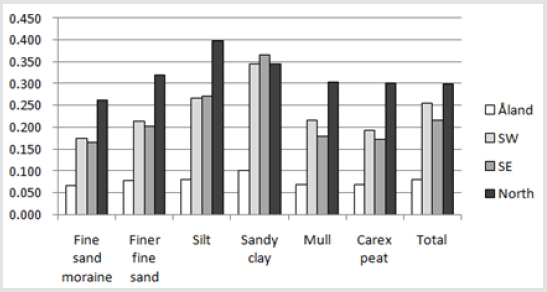 Table 6: Areal Mg/Ca means of six soil-types, 1966-70, approximate age-adjusted male CHD from 1974-83, as well as proportions of CHD and other Cardiac causes of death per total mortality in separate periods.

Table 7: Cropland Mg/Ca of six soil-types and Total in four areas of Finland, 1966-70, and cardiac parameters as percents of respective values of North Finland.

Table 9: Cropland Mg/Ca ratio in six soil-types and Total of Åland, SW and SE Finland in 1986-90 as percents of respective values of North Finland.

Figure 4 shows Regional (Mg/Ca) changes in different soiltypes between periods 1966-70 and 1986-90. Åland as a special case with missing or small number of samples is excluded. (Total increase in Åland was 11 %.) Remarkable is that Finer fine sand, Mull, Carex peat and Total provided complete data for both periods. Because Si.gw value in MK15 Ostrobothnia/Österbottens Svenska was exceptional (mean/median ratio 1.62, cf. on average 1.08), Si.gw regression was calculated by Si.gw.md: It was in whole country 62.8 % and after exclusion of Ostrobothnia (white column) 93.2% (Figure 5). After that preferred Si.gw median (Si.gw.md) for regressions and rejected Si.gw. Si.gw regression by Prp.(mor/ coms) gave similar result, why mean Si.gw was rejected from the following analyses. In other words Si.gw.md can be used as an indicator of Si.gw – it does not cause bias outside of Ostrobothnia. Figure 6 shows that exclusion of northern Regions (white columns) increased cropland [(Mg/Ca).tot.(66-70)] regression by [(Mg/Ca). gw] remarkable ad 87.2 %. In other words: no compliance between cropland and groundwater (Mg/Ca) in North, but good compliance in other parts of Finland, even in Åland. 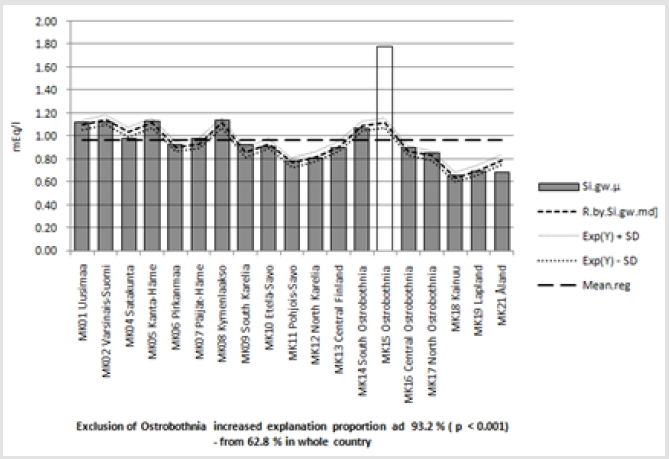 Figure 5: Regional Si.gw mean and its regression by Si.gw median. 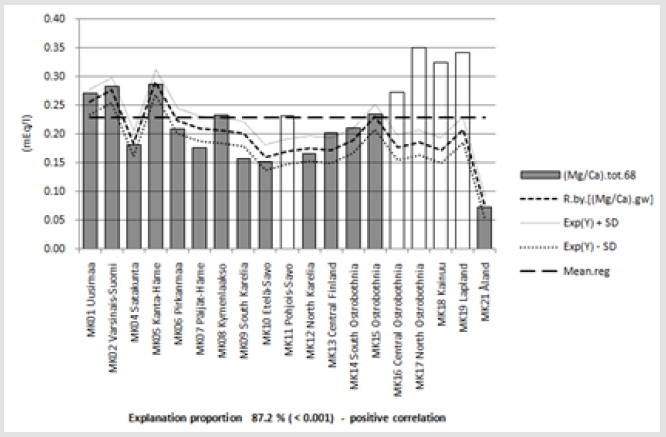 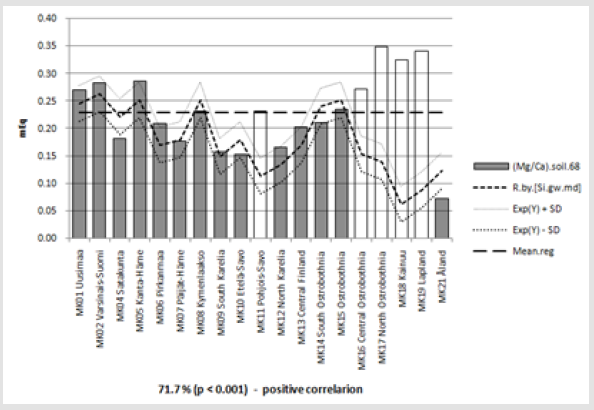 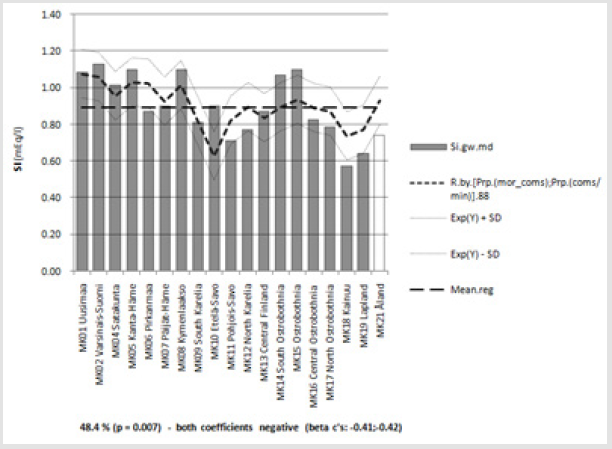 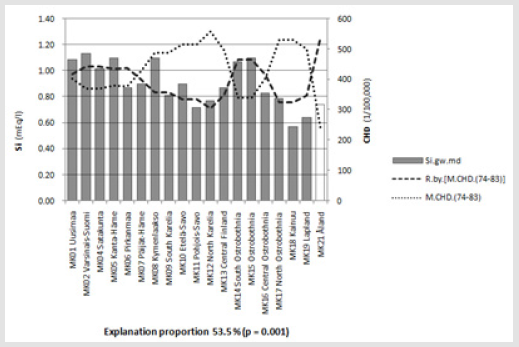 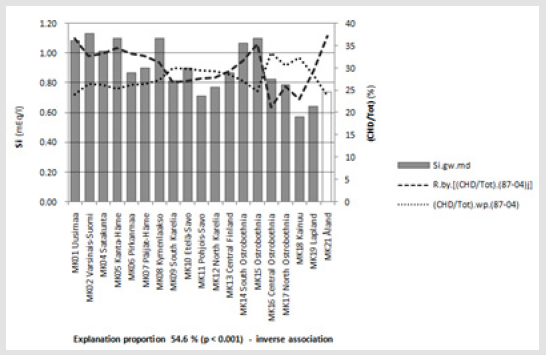 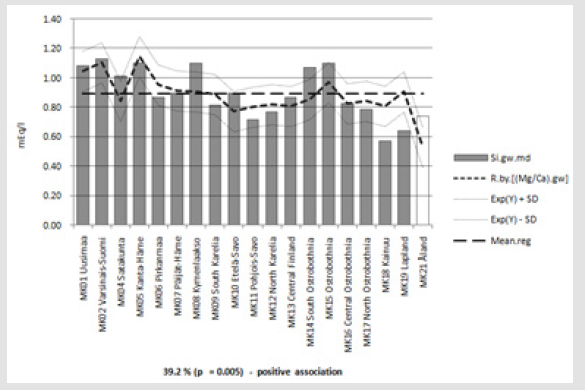 Figure 11: [Si.gw.md] and its association with [(Mg/Ca).gw] in continental Finland. 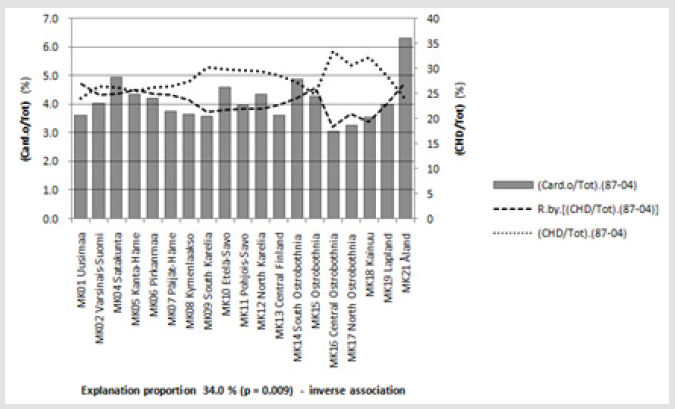 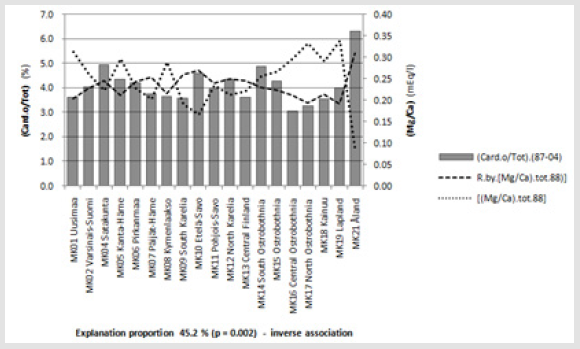 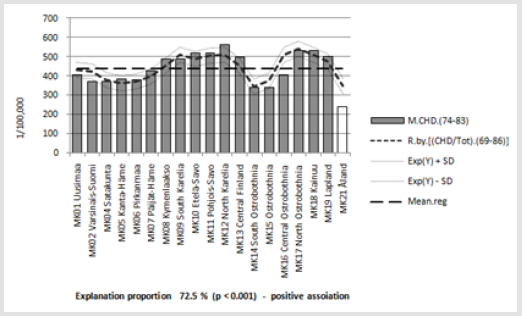 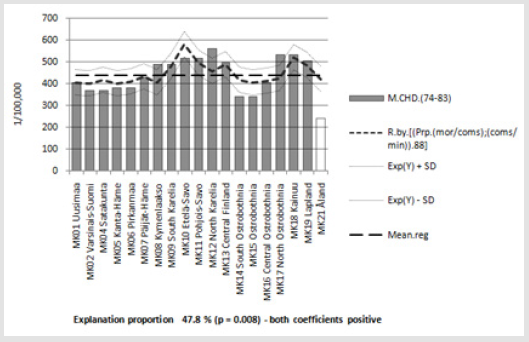 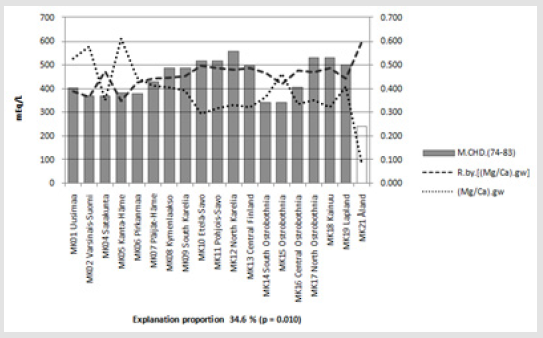 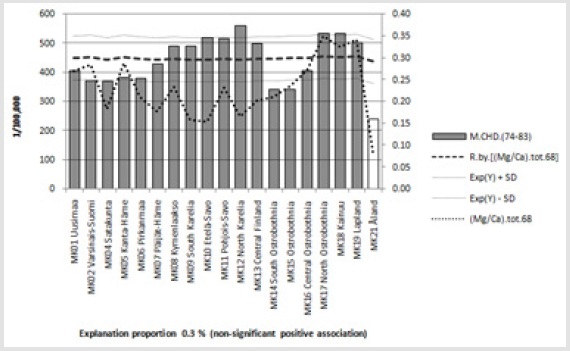 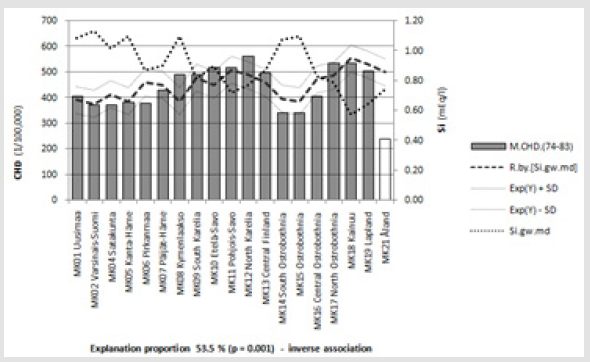 This study shows association with long-term dolomite application and cropland high Mg/Ca ratio in the North Finland (Tables 4-9), which explains the bias between cropland and groundwater Mg/Ca ratio in the North Finland (Figure 6). Exceptional mean Si.gw in Ostrobothia and high association of Regional means and medians of Si.gw outside of Ostrobothnia was observed and Si.gw results are given by medians. [(Mg/Ca).gw], as well as Si.gw, outside of Lapland, were associated similarly and significantly with cropland (Mg/Ca) (Figures 6 & 7). Significant (inverse) association of [Si.gw.md] with soil-type coarseness is represented in Fig.8 by two parameters. Similarly those parameters explained [(Mg/Ca).gw] (not represented in Results). Factors explaining [M.CHD.(74-83)] in continental Finland can be put in order: [Si.gw.md] ( by 54.6 %) (Figure 18 as Figure 9), soil-type proportions [(mor/coms);(coms/min)] (by 47.8 %, p = 0.008) (Figure 15) and [(Mg/Ca).gw] (by 34.6 %) (Figure 16) and cropland [(Mg/Ca).tot.68] (by 0.3 %) (Figure 17). Figure 14 represents that [M.CHD.(74-83)] was explained by proportional CHD mortality in whole population - [(CHD/Tot).(69-86)] by 72.5 % ( p < 0.001). It is slightly surprising, because time-related CHD and CHD/Tot differ from each other [21]. High explanation proportion can be explained by local stability of both parameters (gw & cropland). Separate assessing of Åland can be justified by different soil-type (carbonate soils [24]), small proportion of Finnish agricultural area (0.5 %) [18,20], low number of soil samples [12,13], as well as deaths [6] and very low number (six) gw samples (!). Especially (Card.o/Tot), which is ca 1/6 from (CHD/Tot) (Figure 12) is very sensitive to statistical bias. Predicting plant available Si in carbonate soils by Si.gw [25], can be misleading, why Si associations are generally given by continental Finland, without Åland (or North).

Exceptional Mg (40 mg/l) from (11).Mikkeli was observed (Table 2), but not rejected. So no one of paired samples was discarded. For whole country soil-type comparing was used medians in order to wash out effects of single exceptions. Sandy clay is an important soil-type in SW Finland (and Åland), but rare in other areas (with exclusions of RC.09 & RC10). (Mg/Ca) of Sandy clay was increasing in SW. These results are in accordance with earlier studies: Regional cropland (Mg/Ca) ratio cannot explain regional CHD mortality (Figure 17), [4] - but can explain inversely [(Card.o/Tot)] (Figure 13), [5]. Si.gw (Figure 18) explains regional CHD better than (Mg/Ca).gw (Figure 16) [2]. Explanations, which are working only in continental Finland and by gw, have only statistical value [1], if they cannot explain exceptional statistics of Åland. Association of low Si.gw with low CHD (Figure 18) in Åland could be explained by different micro-milieu around the roots and groundwater [25], although strong data concerning Si contents of foodstuffs is still missing. Low (Mg/Ca) ratio in gw and cropland (Figures 16 & 17) associated with with low CHD seems to be more difficult to explain.

P.S. Exceptional (acid soluble) silicon value of milk [29] suggests on re-analyses of liquid food stuffs (but obviously not solid ones).