As CHD, non-CHD (nCHD-the difference between total and CHD mortality), hasits own inter-annual variation and possiblyassociated with dietary factors, e.g. food mineral element contents. Mg is a cofactor in more than 300 enzymatic reactions, so Mg deficiency can be associated with resistance and recovery of a multiplicity of diseases.Antagonism of potassium (K)and Mg is known in plant science. Human nCHD - the mean of female (F) and male (M) nCHD (FM.nCHD) and fertilization rates are based on old data. The dataon Mgrates from liming agents are opened and estimated figures are slightly corrected (to earlier publications). The mineral element ratios were used as 3-year means (3ym), but nCHD as such.Associations of nCHD with [(K/Mg).fm.3ym] are analyzed from periods 1952-99 and 1969-99. In appendix are represented annual relative changes of smoothed (K/Mg).fm and nCHD.

In human medicine K has a good fame. High dietary potassium is an indicator of high dietary proportion of vegetable food [1]. An randomized double blind survey has shown that daily 2500 mg K supplements by (KCl and KHCO3) have improved endothelial function and reduced osteoclast activity and ratios of U-alb/crea and U-Ca/crea [2]. Magnesium is a cofactor in more than 300 enzymatic reactions [3], so its balance can be associated with resistance and recovery of a multiplicity of diseases. It proper Mg level has several anti-atherosclerotic mechanisms [4].In plant physiology K and Mg have antagonistic effects on their plant contents [5]. Increase inK fertilization of pasture is known to decrease serum Mg content in cow and increase risk of grass tetany, especially when equivalent ratio of K/(Ca+Mg) of grass is over 2.2 [6]. In animals intake of K can decrease Mg absorption from gastro-intestinal tract [7]. The aim of this study is to clarify the association of (K/Mg) fertilization ratio with nCHD and provoke discussion on the role of Mg-K balance in nCHD mortality. 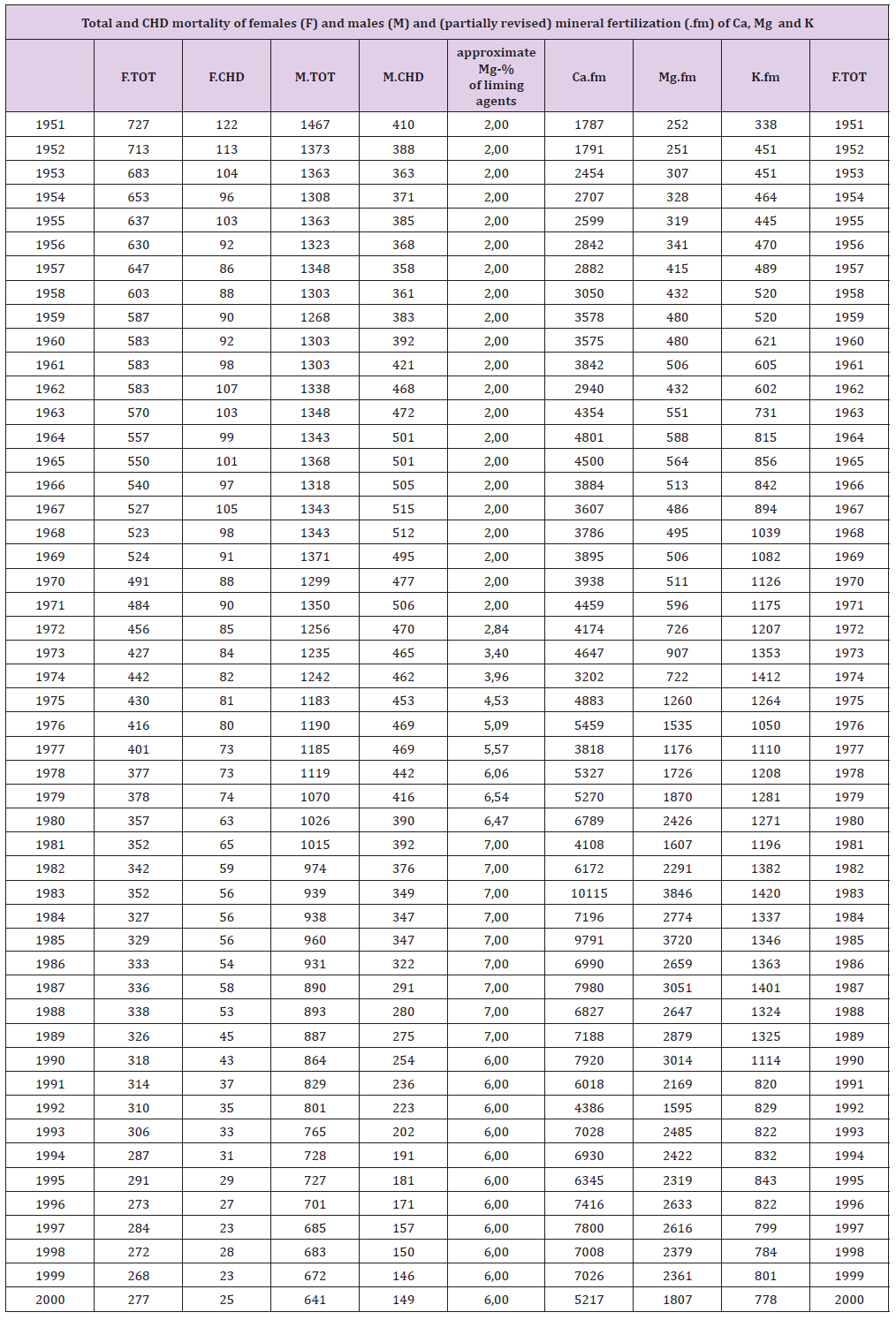 Figure 1 shows the relative values of CHD,nCHD and [(K/Mg).fm.3ym], in percentsto their respective values in 1957. Figure 2 represents relative changes in CHD and nCHD during 1969-2000. In 1969-83 nCHD decreased faster than CHD, after 1985 CHD decrease was faster. Interesting is the stagnation and a small increase in nCHD between 1984 and 1992. 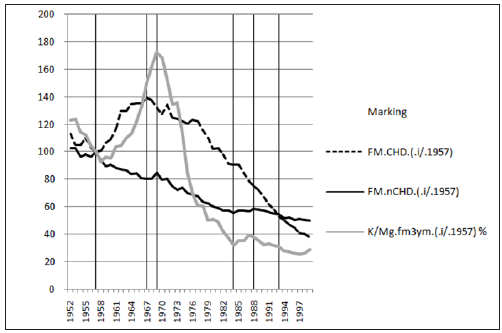 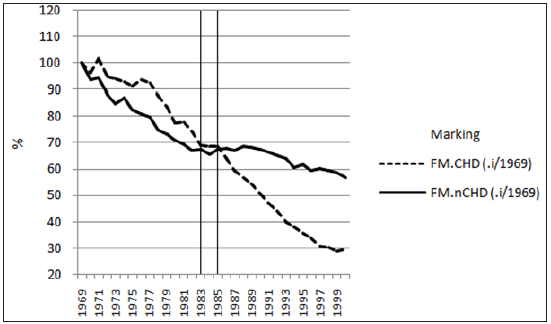 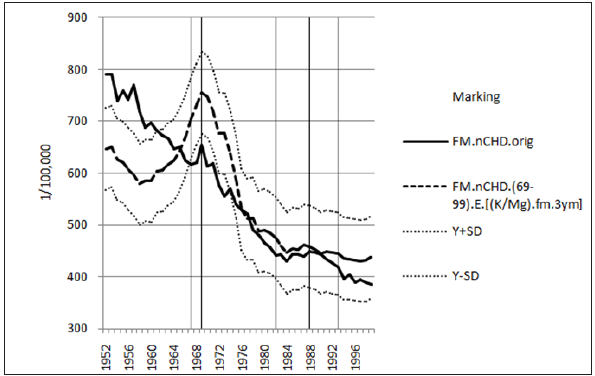 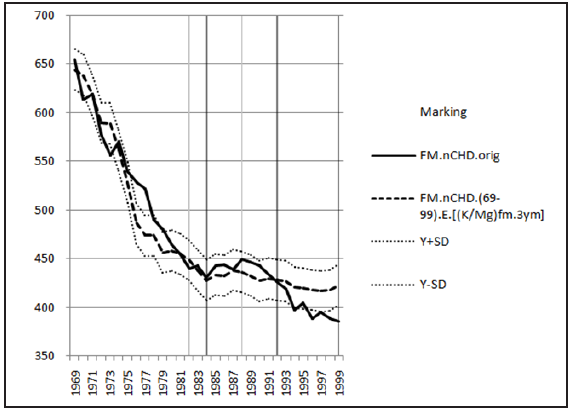 K [2] and Mg [4] and have shown cardiovascular benefits in humans, so this statisticaldisadvantage of (K/Mg) fertilization ratio concerning nCHDseems to be a surprise. Study of He et al.[2] seems to show that Mg absorption was possibly not disturbed by K supplements. Figure 1possibly supports CV benefits in 1967-69, when during rapid (K/Mg) increase CHD begun to decrease (Figure 1) but increase of nCHD continued. On the other side during the rapid decrease of nCHD in 1969-82 associated with rapid decrease of (K/Mg). fm(“causing” increase in CHD/total mortality ratio).

In the 1970’s Finnish daily food (600 g dry weight - DW) contained 4,500mg K, 1500mg Ca and 440mg Mg, i.e. equivalent ratio of K/(Ca+Mg) was 1.0 [1]. First additional 5 g K could raise this ratio ad 2.2, i.e.the danger of “grass tetany” by Finnish people is very limited without strong K supplementation and if the calcium intake is not reduced more than 50 % from the level in the 1970’s. According to my old textbook of physiology the minimum daily requirement of K is 1g [21]. Textbook of biochemistry wrote that “2 to 4 g. of potassium ... in the diet per day is more than sufficient” [22a]. Late veterinary surgeon Seppo Haaranen told often: “Potassium causes an enormous stress to cow kidneys, because so much K is needed to be excreted”[23]. Renin-angiotensin system works via adrenal gland regulation [22b]. Possibly K is associated stronger than Mg with renin-angiotensin-adrenergic system [24] and in “pharmacological” doses could better inhibit it (?). Although inhibition of renin-angiotensin-adrenergic system can produce cardiovascular benefits, this inhibition could make some unbeneficial effects in the physiological defence system [25]. Anyhow some of the Mg benefits could be based on K balance control [26].

Distribution of Mg-rich mines and quarries has been and is different in different areas of Finland. In the 1950’s the highest Mg contents of liming agents (> 10 %)situated in the northern Finland, northward from Joensuu-Kuopio-Kokkola line, (with high CHD mortality!). But the effect of liming agents on soil Mg could have been shorter than the average period between supplementations (5 years?) on those coarse northern soils [27]. Because of the relative supplementation of all NPK-fertilizers [17,20] have been similar, the graphics and associations of K/Mg are similar with NPK/Mg. The roles of N and P need further discussion [28].

The need of adjustments to Mg-% caused by Mg-containing calcitic lime stones in (1972 and 1951-71) has been a big problem, when during the last years advises of late Lauronen have not been available. Obviously 2,000tn for 1972 is an overestimation, because it based on data from 1976, and after 1972 Mg percents of liming agents were remarkably increasing. Slight estimations downwards are included in [4,28]. In [4], opposite to [28,29], I concluded (and wrote)that years 1951-71 needed the same 0.5 % addition as 1972. But it was an error [32]. The figures of annual sales of liming agents have been compliant with [8], but figures concerning area used before 2008 have had biases and caused a part of the discrepancies between [15] and [4,28].

Fields get Mg via deposition [15], but possible is that losses per air can be remarkable, too. Association parameters calculated by 3-y means values can make bias, but raw fertilization figures make their own bias, because duration of action is longer than one year. This is justified even by the fact that the amount of explained by regression is not the same as its causal impact (Figure 5).