It was found that transfer of air inflammation,from the,Electronically Energy Explosion (EEE) active zone into fresh (non-reacted) air mixture is produced by photochemical process including UV radiation of NO(B2П) molecules and absorbing of that radiation by oxygen. The transfer of some molecules produced in the EEE active zone is unnecessary for the Air Inflammation Propagation (AIP) process. The set of reactions for explanation of observed phenomenon is suggested.

The Electronic Energy Explosion (EEE) in the air can be initiated by electrical discharge near the ferrite surface [1]. The EEE active zone can be characterized by very high concentrations of electronically excited particles. It was found earlier [2] that EEE active zone is able to propagate in space by some definite conditions. One of these conditions is the presence of light reflecting walls in the reactor [3]. In [4] we have formulated the assumption that radiation produced by NO(B 2Π) is responsible for AIP. This radiation is absorbed by O2 molecules with formation of O2(A3Σ+u) and initiation of nitrogen oxidation chain reaction. The last reaction causes a set of phenomena that we named “air inflammation”. An experimental proof of such photochemical mechanism of AIP was the aim of this work.

For the proof of the photochemical way of AIP we used a CaF2 glass as a baffle inside a long cylindrical reactor 90 mm in diameter. Such baffle is transparent for UV and visible light, but it detains any molecules, keeping them of transferring from EEE active zone into fresh (non-reacted) air mixture. The transparent walls of reactor enabled to see and to record videos of air inflammation in all parts of reactor. The atmospheric pressure was used in these experiments. For inflammation propagation at such conditions the reactor was wrapped with Al foil in according with results of [3]. The same inflammation initiating arrangement was used as in works [3,4]: it consisted of ferrite ring 16 mm in diameter and two steel electrodes pressed to the ferrite surface. The distance between the contact points of electrodes with ferrite was 3-4 mm. Two capacitors of 1000μF capacity charged to the voltage 220V on each of them connected in sequence were joined to electrodes: one of the electrodes was constantly in contact with capacitors battery, another was connected through a switch.

After turning the switch on the 440V voltage was applied to the discharge gap. The chart of electrical connections was described in [5] (Figure 1). Xiaomi Action Camera (Mi Action Camera 4K, Model: YDXJ01FM) was used for video recording of EEE. It provided the rate of recording equal 200 frames/s. 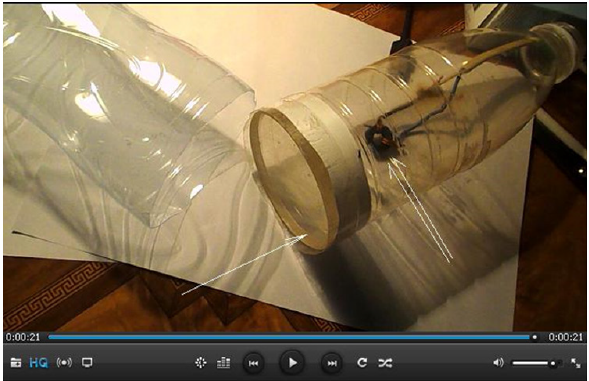 Two adjacent frames of EEE video are placed on Figure 2. On the first one there is the image of EEE radiating bright blue light and filling the entire reactor volume in spite of CaF2 baffle positioned in the reactor at the place marked by one white arrow. On the second frame there is the image of EEE afterglow of orange-red color. It fills the entire reactor volume too. So, it can be seen that air inflammation is transferred in the part of reactor which was separated from the initiating unit by CaF2 baffle.

Figure 2: Two frames of video containing EEE in the reactor with CaF2 barrier. The Air Inflammation filled the entire volume of the reactor in spite of barrier presence at the place marked by one white arrow. Two white arrows are showing at the place where the ferrite ring was positioned. The left frame contains the EEE image. The right frame contains the EEE afterglow image.

It is evident from presented experimental results that the AIP does not need some transfer of the molecules; the transfer of radiation (produced in EEE active zone) is sufficient. The spectrum of radiation produced in EEE active zone contains first of all the bands system of NO(B 2Π) molecules [1]. The most shirt-wave of these bands belong to the diapason 250-300 nm [6]. The Herzberg 1 bands system of O2 molecules belongs to that diapason [7]. The light absorbing in this band system results in appearance of O2(A3Σ+u) molecules with energy 4.3 eV. The interaction of two such excited molecules can produce O(1S) atom:

These atoms are able to initiate the nitrogen oxidation chain reaction [8]:

The assumption about reactions (1), (3), (5), which need the interaction between two active particles, can explain why the EEE initiation needs some big enough amount of energy (for example – the constantly present cosmos radiation is not enough for EEE in the air initiation).

It was found that transfer of air inflammation,from the,Electronically Energy Explosion (EEE) active zone into fresh (non-reacted) air mixture is produced by photochemical process including UV radiation of NO(B2П) molecules and absorbing of that radiation by oxygen. The transfer of some molecules produced in the EEE active zone is unnecessary for the Air Inflammation Propagation (AIP) process. The set of reactions for explanation of observed phenomenon is suggested.