The propagation of the air inflammation is observed at atmospheric pressure in the 55 cm long reactor with reflecting walls. The velocity of propagation is estimated to be not less then 100 m/s. These phenomena are explained by the role of electronically excited molecules in the mechanism of nitrogen oxidation chain reaction.

Keywords: The Propagation of Flame; Inflammation of Air; Electrical Discharge; Electronically Excited Molecules; NO (B 2П); NO2*

This Article is concerning to investigation of Electronic Energy Explosion (EEE) in Air properties. The Phenomenon of EEE is described by exponential growth of electronically excited molecules concentration initiated by pulse periodic discharge with frequency 1000 Hz or by pulse of discharge near the surface of ferrite piece [1,2]. In the recent work [3] was found, that enhancing of Air pressure higher then Р = 1,3 atm at the initiation of EEE results in formation of active zone which propagates from the initiation region to whole the reactor volume. So, at air pressures lower then 1,3 atm the propagation of air inflammation is not observed, and at air pressures Р> 1,3 atm-it can be observed. As the ability of flame to propagate is rising with the reaction rate rising, we can explain the effect of air pressure by participation of air molecules in the chain branching and termination processes of a nitrogen oxidation chain reaction. The Mechanism of nitrogen oxidation chain reaction [4] includes the reaction of electronically excited molecules NO2 * formation: NO + O +M => NO2 * + M. This gives for the stationary concentration of NO2 * [4]:

To explain the rising of electronically excited molecules concentration and the chain branching rate together with [M] it is necessary that the termination of such molecules does not depend on [M]. It is possible at high concentration of NO3 or (and) at high intensity of stimulated emission of radiation. The stimulated emission makes the main contribution to the radiation process in the EEE active medium [5,6]. So, we can assume that covering of reactor walls with some reflective material (the Al foil for example) can significantly better the conditions of air inflammation propagation after initiation of EEE by using of electric discharge near the surface of ferrite piece. The Aim of this work was the experimental proof of the assumption mentioned above.

For the EEE initiation in this work was used the ferrite ring 16 mm in diameter (magnetic material with μ = 2000). Two electrodes made of steel were in contact with the ferrite surface. The distance between the contact points was 2-3 mm. The first of these electrodes was connected to one pole of capacitors battery. A switch was placed between the second electrode and the second pole of the capacitor battery. Turning the switch in the “on” position resulted in applying of 440 V- total voltage on two 1000 μF capacitors connected in sequence – to the electrodes contacting with the ferrite surface. This resulted in EEE initiation in the gap between electrodes. This arrangement (the ferrite ring with electrodes) was placed in the transparent plastic tube 55 cm in length, which can be seen at the Figure 1. The tube described above could be wrap up (or not wrap up) with the Al foil in such a manner that there remained a longitudinal slit in the foil. For the radiation from the tube registration the Xiaomi Action Camera (Mi Action Camera 4k, Model : YDXJ01FM) was used, 200 frames/s was the rate of video recording by this action camera. 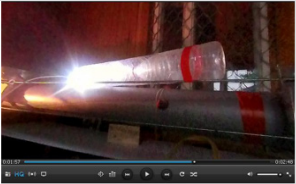 Figure 1: Here is one frame of video which contains the EEE image in the transparent tube without Al foil. 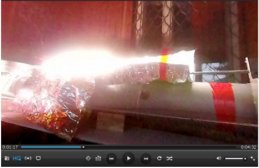 Figure 2: Here is one frame of the video which contains the EEE image in the transparent tube wrap up with Al foil.

To determine the dissociation and diffusion energy barrier of H2 molecule on the 2Ti@Al(111) surfaces, Configuration Interaction Nudged Elastic Band (cNEB) method is used to find the Minimum Energy Paths (MEP), where 4 to 20 images are constructed between given initial and final state. The elastic connected images are optimal with a damped molecular dynamics. The force is set to 0.03 eV/Å.

The obtained results give evidence that radiation of electronically excited molecules makes the main contribution to their deactivation. It is possible only in the case when the stimulated (not spontaneous) emission of radiation takes place. In the analogical experiment with EEE in the jerrican of 10 liter volume wrap up with Al foil at the air pressure 1.5 atm (Figure 3) was observed the red radiation coming through the slit in the foil to the white screen in the same time when the yellow radiation passes through the butt-ends of the jerrican (this radiation can contain the green and blue components). The red radiation can be attributed to NO2 * molecules, the green colored radiation comes from exiplexes N2 -O(1 S), the blue radiation is produced by NO(B 2П) molecules. The yellow light spot can be seen at the screen opposite to the butt-end of the jerrican. The difference in the colors of radiation produced in different directions gives evidence for contribution of stimulated emission of radiation to observed process. There is one more fact worth of noting: the time needed for the air inflammation propagation at the 50 cm distance is not more than 5 milliseconds (this is the time of one frame of video formation). It gives for the speed of flame evaluation: 100 m/s. This value is higher than the known speed of flame in the one of the most fast burning mixtures (75% Н2 + 25% О2 , the normal speed of burning in that mixture equals 10 m/s [7]). The explanation of that fact can relate to the higher velocity of hot NO molecules, which are formed in the process of vibration energy deactivation. The main contribution to the radiation of NO (B 2П) molecules make the optical transitions (B 2П, v = 0,1,2) ⤍ (X 2П, v’=10,…, 15)[1]. 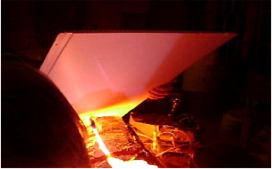 Figure 3: EEE in the jerrican of 10-liter volume. The white screen is illuminated by red colored radiation coming from the slit in the Al foil.

These transitions result in formation of NO molecules at high levels of vibration energy: v’ = 10 – 15. To loose such vibration energy the molecule should undergo 10-15 deactivating collisions, after each of them it will have the translational motion energy about 2 eV. That is two orders of magnitude more than average thermal energy of molecules at room temperature. The air inflammation propagation gives the method for nitrogen oxidation in the unrestricted volumes by spending restricted amounts of energy. Using of reflecting walls of the reactor is simpler technologically then creation of hermetic reactor for the pressures as high as 1.5 atm.

The propagation of the air inflammation is observed at atmospheric pressure in the 55 cm long reactor with reflecting walls. The velocity of propagation is estimated to be not less then 100 m/s. These phenomena are explained by the role of electronically excited molecules in the mechanism of nitrogen oxidation chain reaction.

Keywords: The Propagation of Flame; Inflammation of Air; Electrical Discharge; Electronically Excited Molecules; NO (B 2П); NO2*