Malaria and Other Infectious Diseases, Suppression of the Evolution of Drug Resistance Volume 12 - Issue 2

It is well understood that combination therapy suppresses the evolution of drug resistance. The number of drugs necessary to do this depends on many factors. This paper addresses the key factors in the context of a treatment protocol for malaria which still saw the emergence of resistance despite the use of combination therapy. This paper gives general guidance on the principles of determining the kind and number of selection pressures needed to suppress the evolution of drug resistance.

Rogers and his co-authors describe possible reasons in their study. In their discussion on the failure of combination therapy, they describe some possible explanations. These include defective drugs in one form or another (unlikely), insufficient minimum inhibitory concentrations, preexisting resistance to one or the other drug effectively reducing the treatment to single drug therapy among these reasons. Two possible explanations for the emergence of resistance not considered in this paper are de novo evolution of resistance to the simultaneous use of both drugs and an analysis of those subjects in which the double drug resistant variants appeared.

The de novo evolution of drug resistance by rmns is discussed in [4,5]. Though in the Rogers study they do not include subjects with hyperparasitemia (250,000 parasites/mm3), 100,000 parasites/mm3 still gives rise to huge population sizes which were the upper limit used in the study. In [1] it is shown that with the huge population sizes attainable by malaria, there is a reasonable probability of a double beneficial mutation occurring which would be the mechanism for defeating two-drug therapy. To get an understanding of how combination therapy impacts the ability of a microbial population to adapt to these combination selection pressures, consider the following Venn diagram graphical representation of the mathematical behavior of the process (Figures 1-3).

Figure 1: Single drug treatment, the area inside the ellipse represents variant resistant to drug A1. 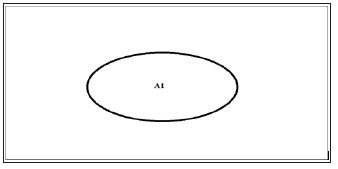 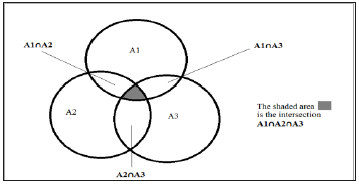 What these three Venn diagrams illustrate is the fraction of the malaria population which has some degree of resistance to the particular therapy. Consider what happens when one uses an antimicrobial drug to treat an infection. The drug acts by killing (or impairing the replication) of the weakest variants first. If the agent is effective against all the variants, given enough time of application of the drug (selection pressure), this will drive the microbe population to extinction. If there are variants in the population which have some resistance to the agent, successful treatment may still occur if the patient has adequate immune function to remove the remaining variants. If the patient’s immune system does not mount an adequate response, relapse occurs with variants that have some degree of resistance to that drug and if these variants can replicate sufficiently, there is the potential of more beneficial mutations for that microbe to improve fitness against that drug.

Using two drugs simultaneously reduces the fraction of the population of variants which have resistance to both drugs simultaneously. This smaller residual population of multi-drug resistant variants put a smaller load on the patient’s immune system but still, if the patient’s immune system cannot remove these variants, these remaining variants become candidates for more beneficial mutations getting resistance to both drugs simultaneously. However, unlike single drug therapy which only requires a sequence of single beneficial mutations to achieve resistance, double-drug therapy will require a sequence of doublebeneficial mutations to achieve resistance to the combination of drugs. This requires much larger populations of the infectious microbe but replicators like HIV and malaria can achieve these population sizes.

Three drug therapy follows the same pattern. In this case, though, the sub-population which is resistant to all three drugs will be much, much smaller than for either one or two drug therapy. If there happen to be some variants resistant to all three drugs, this will be a much smaller burden on the patient’s immune system but will also require three simultaneous mutations to continue to improve fitness. The population sizes required for this to occur are much larger than even HIV can attain. But patient compliance is a crucial factor in these situations. If a variant exists with resistance to the three drugs, even a short withdrawal of the selection pressures will allow the population to expand rapidly giving an improved probability of a simultaneous triple mutation improving fitness against these drugs.

Any treatment of an infectious disease must take all these factors into account. Even under ideal circumstances and proper use of medications, the existence of variants within the microbial population may require more than two drugs to ensure that the microbial population is driven to extinction (or prevented from accumulating the mutations which would give resistance to the treatment). Any general protocol to treat a particular infectious disease must start with the assumption that some patients will not be able to mount a reasonable immune response to the disease. And then a study of susceptibility patterns in the region will give guidance on which drugs have a reasonable chance of being effective in the set of selection pressures used to treat the disease.