We reported a case of Locked-in syndrome, who underwent a specific clinical and neuropsychological battery, assessing verbal memory, linguistic comprehension, perception, executive functioning and abstract reasoning, and the quality of life, at baseline and after two months. This battery was adapted to get yes/no responses through the eye movements. Comparing the total raw scores of all tests at T0 and T1, we found validity features values above 0.80, considered indicative of good agreement. We can hypothesize that the clinical and neuropsychological battery we used could be validated for Locked-in patients, even if more data are requested.

Locked-in syndrome (LIS) is a rare condition in which patients are aware and awake but cannot move or communicate verbally due to complete paralysis of nearly all voluntary muscles in the body except for the eye movements. It is the result of a brainstem lesion in which the ventral part of the pons is damaged [1]. Ischemic strokes are the most common cause [2-6]. They most commonly occur following a basilar artery thrombosis with secondary occlusion of the perforating arteries. The other causes of LIS may be hemorrhages, brain trauma (pontine contusion or axonal damage), tumors. This syndrome is defined by five criteria (American Congress of Rehabilitation Medicine, 1995)

Corticospinal tracts damage (paralysis of all four limbs) induces selective supranuclear motor de-efferentation. Damage to the nuclei of the facial nerve and lower cranial nerves explains the presence of facial diplegia, anarthria, dysphagia, tongue paralysis, as well as aphonia and respiratory failure. The mesencephalon and the oculomotor nerve are intact. The age of onset of LIS varies between 17 and 52 years old. The actual prevalence rate of LIS is not specifically documented in the literature, probably represents less than 1% of all strokes, and the incidence rate is probably underestimated. During the acute phase, infections, most commonly pneumonia, are the most common cause of death (40% of the cases). The initial stroke is the primary cause of death in 25% of the cases. More than 85% of individuals are still alive after ten years [7-12]. Bauer described three categories of LIS [12,13].

a) Complete or total LIS: Quadriplegia and anarthria. No eye movement.

c) Incomplete LIS: Recovery of some voluntary movements in addition to eye movements.

The diagnosis of LIS may sometimes be difficult, above all during the acute phase, especially in cases of LIS caused by a traumatic brain injury with an initial coma. Some patients, at first, present complete LIS, in which no voluntary eye movement is possible. This clinical condition may thus lead to incorrect diagnoses of prolonged coma, vegetative state, minimally conscious state or akinetic mutism, although cognitive functions are generally preserved [14-19].

In LIS patients, communication may be established by using a yes/no code at the eyes or eyelids, or even at the head or upper limbs when there is a motor recovery. On clinical grounds, it is assumed that auditory and visual comprehension is preserved. The description of single cases, investigated at a relatively late phase post-stroke, has led researchers to consider that the cognitive abilities are also preserved [20]. Previous descriptions of LIS cases have often emphasised that, although LIS patients had recovered oral expression and even motor control at the upper limb, however, the assessment of their cognitive functions was difficult, because of the maladjustment of traditional tests which require an explicit verbal response. Hence, clinical tools, adapted to LIS patients, providing objective measures are necessary for a more accurate diagnosis of LIS and to evaluate the outcome of these patients in the clinical practice. To date, there are only few studies evaluating LIS cognitive changes and recovery over time through appropriate clinical and neuropsychological tools [21-23]. In the present case-study, we propose a complete and specific clinical and neuropsychological battery adapted to severely brain-damaged patients to assess the cognitive performances and the quality of life in a patient with LIS.

We studied a LIS male patient (age: 62 years old; education: 5 years) who suffered a pontine ischemic stroke. The patient presented spontaneous breathing, bilateral spastic quadriparesis, bilateral Babinski’s sign and aphonia. He had sustained eyes opening and movements (consistent vertical tracking and fixation) with response to visual threat. The brain Magnetic Resonance Imaging (MRI) examination showed ischemic lesions at pons level, and periventricular white matter hyperintensities. The delay since the initial event was 20 months. The patient underwent a clinical and neuropsychological evaluation compounded by several tests, assessing different cognitive functions and the quality of life (Table 1). The written informed consent was obtained from the patient’s legal guardian. The clinical and neuropsychological tools were adapted to get dichotomic responses. His YES-NO responses were based on a non-verbal communication channel, on closing eyes for YES and rising eyes for NO. He was assessed twice (at baseline – T0, and after two months – T1), in order to evaluate test-retest reliability, homogeneity and internal coherence. The clinical and neuropsychological assessment included: 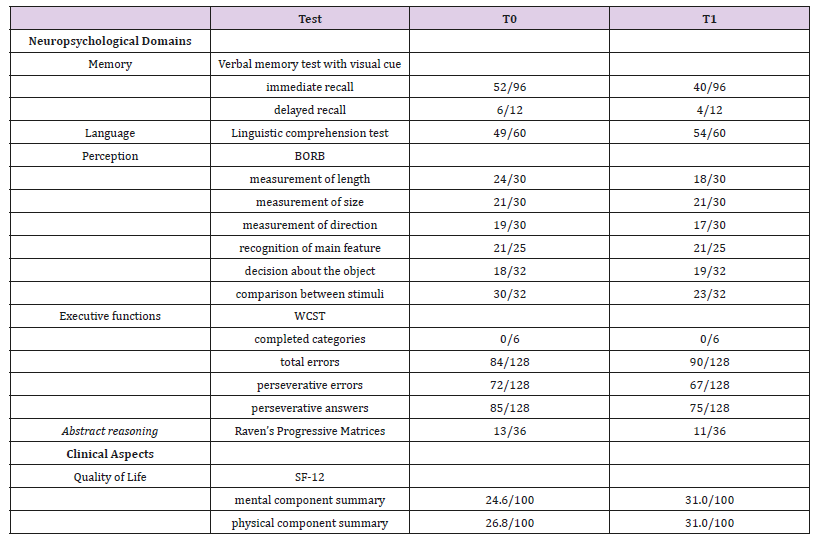 a) Verbal memory test with visual cue (adapted from Test di Memoria e Apprendimento – TEMA) [10]. The patient was required to memorize a list of words read by the examiner and to remember them before immediately and then after a visuospatial task. In both steps, the immediate and delayed recalls occurred showing the visual cue, in which the patient had to indicate the target picture corresponding to word among distracters.

b) Linguistic comprehension test (adapted from Aachener Aphasie Test, AAT) [2]. This test evaluates the oral comprehension of words and sentences. The examiner read a word, or a sentence and the patient had to recognize and to indicate the numbered target stimulus picture corresponding to a word or a sentence among distracters.

d) Wisconsin Card Sorting test (WCST). This test assesses strategies planning ability, problem solving, judgement ability, cognitive flexibility. The patient was showed four numbered cards, the so called “guide cards” representing different drawings, a red triangular, two green stars, three yellow crosses and four blue circles. Then, the patient received other cards representing the same drawings arranging in different way. The patient was asked to associate each card to the “guide cards” according to a logical criterion (ex: color, shape, number) previously established by the examiner. The criterion is changed after ten right consecutive answers and the patient had to identify every time the right criterion.

e) Raven’s Progressive Matrices. This test is used to evaluate the abstract reasoning. The patient was showed the Raven’s progressive matrices. They consist of some drawings without a box and the patient was asked to choose which from the showed numbered pieces was appropriate to complete the drawing.

All clinical and neuropsychological total raw scores, at baseline and after two months, were compared to evaluate the following validity features: test-retest reliability assessed through the Intraclass Correlation Coefficient (ICC), homogeneity through the Pearson’s correlation coefficient and internal coherence through the Cronbach Alpha. The internal coherence is a measure of the internal consistency of a scale and it concerns the extent to which the items of a test or instrument are measuring the same thing. The homogeneity refers to the linear correlation of each item with the total score of a test. The individual items of an instrument measuring a single construct should give highly correlated results reflecting the homogeneity of the items. The test-retest reliability is a statistical measure refers to the accuracy of the repeated measuring of the clinical and neuropsychological performance in different moments of time. The ICC was used as the index of agreement. We found ICC values above 0.80, considered indicative of good agreement.

Specifically, the validity features values, among the total scores of all tests at T0 and T1, were .98 for test-retest reliability. 98 for homogeneity and .99 for internal coherence, estimated with 95% confidence interval and a significance at the 0.01 level (2-tailed). Besides, a good cognitive performance was clinically observed, in particular for linguistic comprehension and perception. Instead, low performances were observed above all for executive functioning and verbal memory. The patient also showed a low quality of life. All performances were stable at two time points (T0 and T1).

In LIS patients, most of the previous investigations have emphasized the preservation of cognitive functions have reported normal intelligence and performance in the spatial orientation, right-left discrimination, language, and calculation tests in a patient suffering from LIS for 12 years, who was assessed by using a writing device through a yes/no code at the eye level. Two further studies showed preservation of verbal comprehension (Boston Diagnostic Aphasia Examination) and intelligence (Wechsler scale). Conversely, the longitudinal investigation of another case revealed impairment of processing speed, attention and concentration, and functioning on performance-based tests. Disorders of perceptual aptitudes and executive functioning were also demonstrated. These problems were partially recovered over time. Furthermore, the study of long-term LIS survivors identified attention and memory disorders as relatively frequent complaints. Our results seem to be consistent with the literature data, indicating the absence of extensive cognitive deficits in LIS patients, but the presence of a specific impairment in one or more tests.

Indeed, even if our patient shows a complete self and environmental awareness, a normal perception and linguistic comprehension, he presents specific cognitive impairments, clinically observed in particular for executive functioning and verbal memory. We performed a subtest from TEMA and the WCST to evaluate respectively verbal memory and executive functioning, because they are very sensitive tests and easy to be administered and to be adapted to LIS patients. Besides, even if the subtest from TEMA is a verbal instrument, it may be used with LIS patients because it allows to assess verbal memory through a visual cue.

Thus, although the cognitive functioning is generally preserved, LIS patients may present specific cognitive impairments. Several mechanisms may contribute to explain the difficulties of LIS patients in cognitive performance. A first explanation could be in the influence of the response way, which is a yes/no code at the eyes or eyelids level in most of LIS patients: the final choice of each patient is always confirmed (yes/no) and this minimize the risk of error related to the response procedure. Second, cognitive impairment could occur in long-term bedridden subjects with relatively poor social interaction, which leads them to have difficulties in the sustained attention. Third, the partial impairment of auditory recognition (associative level) deserves attention. However, our patient showed that the understanding single words was fairly well preserved. Beyond these factors, we must emphasize that cognitive disorders may be related to the lesion of brainstem systems activating the hemispheres, which are localized in the pons. Unilateral pontine lesions (as our patient showed) impair the activity and cerebral blood flow of the controlateral hemisphere with prominent consequences on the thalamus, striatum and anterior dorsolateral cortex. Subcortical as well as anterior cortical dysfunction could contribute to difficulties in complex sentence comprehension and problem solving.

In conclusion, this study, even if limited to a single patient, shows that cognitive functions may be investigated clinically in a LIS patient who is able to use a yes/no code, and who presents with moderate and selective cognitive disorders. Therefore, from these preliminary data, even if limited to one patient, we can hypothesize that this specific clinical and neuropsychological battery has a significant degree of reliability and so it could be validated for LIS patients, even if more data are requested. As future perspective, we propose to enhance the sample investigating the sensibility and specificity of this clinical and neuropsychological battery for LIS patients.