Betulin is a pentacyclic triterpene alcohol with a lupane skeleton and is known to possess a broad range of biological activities, including antiinflammatory, anti-viral and anti-cancer actions. Betulin contains primary and secondary hydroxyls that are situated in different steric environments and shows different activities. The literature concerning the pharmacological properties, the resource and isolation of betulin, the chemical synthesis of betulin and its derivatives, the biotransformation of betulin was reviewed and it will prepare for the further studies such as the structure-activity research (SAR), the pharmacological and toxicologic study.

Betulin (Figure 1), lup-20(29)-en-3,28-diol, also known as betulinol, betuline and betulinic alcohol, a principal component of birch bark, also found in Asparagus, barks and leaves from Punica, Ocimum, Zizyphus and other plants is a naturally occurring lupane-type pentacyclic triterpene and exhibits a variety of activities [1-3]. Besides, betulin can be applied to food, cosmetics and pharmaceutical industries, with the activities of inhibiting the dissolution of the protein in hair fibers and improving the damaged hair reported in a patent application in United States.

Pharmacological Properties of Betulin and the Derivatives

Plant Growth Regulation Effects: Three triterpenoids (betulin (Figure 1), betulinic acid (Figure 2), oleanolic acid (Figure 3) and synthesized betulin glycosides were selected to be used to study the germination and growth regulation tests on alfalfa seeds in order to investigate structure-activity relations between the sugar chain structures of triterpenoid saponins and their plant growth regulation effects. They discovered that betulin had a slight growth inhibitory effect on alfalfa radicles. Surprisingly, betulin glycosides exhibited stronger effects than betulin, and betulin glycosides particular with two to four glucose residues as a sugar moiety had the greatest inhibitory activity. Moreover, betulinic acid had stronger growth inhibitory effects on alfalfa radicles than betulin among the triterpenoids [8].

Antifeedant Activity: As early as in 1995, several semisynthetic transformations of betulin were studied as antifeedants for larvae of the Colorado potato beetle (Leptinotarsa decemlineata). The results showed that simple oxidative modification of the side chain of betulin diacetate could result in products with significant antifeedant activity against Colorado potato beetle. Among the eight compounds semisynthesized, the most active was 30-hy- droxy-20-oxo-29-norlup-3,28-diacetate (Figure 4), however, the acetylation of (Figure 4) significantly reduced anti feedant activity [9] (Figure 2).

Immunotoxic and Allergenic Effect: Birch bark dry extract (BBDE) containing no less than 70% of betulin was studied by LP Kovalenko in complex tests on mice and guinea pigs. They found that BBDE containing not less than 70% of betulin does not exhibit immunotoxicity and allergenic properties upon peroral administration in doses of 100 and 1000 mg/kg. However, the data indicated that BBDE administered in a therapeutically effective dose of 100mg/kg possesses antioxidant and anti-inflammatory properties [6].

Increasing Enzyme Activity: According to the experimental data of intact rats, Birch (Betula) bark dry extract (BDE) preparations (B-content of betulin-82%, V-content of betulin-78.1%, and, especially S-content of betulin-71.1% types) produce a significant dose-dependent increase in the monooxygenase activity and especially in the hydroxylase activity of cytochrome P-450 which is a key enzyme of biotransformation in vitro in liver microsomes and in vivo [10]. In vitro experiments on rats showed that compared to the control betulin, Betulin-3, 28-diphosphate and its sodium salt Na-BDP-1 increased catalase and SOD activity and improved energy metabolism more effectively than Na-BDP-2][11]. 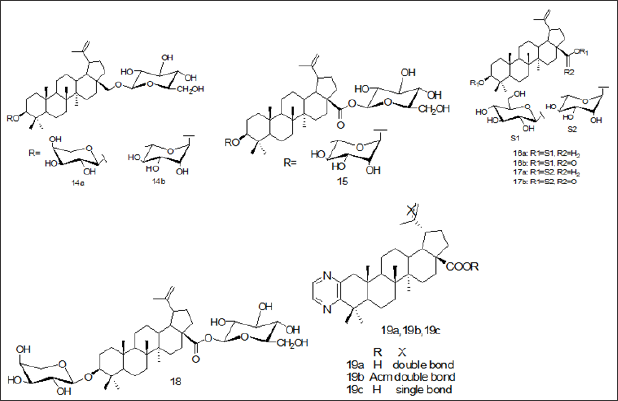 Betulin derivatives were found to inhibit Alphavirus replication by L Pohjala et al. They screened 68 betulin derivatives against Semliki Forest virus (SFV), a member of Alphavirus genus and a commonly used model for replication of positive-stranded RNA viruses. The basic structure of betulin was moderately active against SFV (IC50 45μM), however, antiviral potency was enhanced in particular by certain cyclic ether or ester substituents, as demonstrated by 28-O-tetrahydropyranylbetulin and 3, 28-betulinyl di (2-sulfobenzoate) (IC50 values17 and 11μM, respectively). Because of non-nucleoside structure and relatively low toxicity, betulin derivatives may be more competitive to the few inhibitors of these pathogens [16].

Anti-Inflammatory Activity: After the high activity of betulin acylates were found by OB Flekhter et al. they synthesized some acylates oftriterpennoid (betulin, allobetulin, betulinic acid) derivativesIa (Figures 9a-9f, Figure 10a-10c) and (Figure 11a-11c) and investigate their anti-inflammatory activity. The results of anti-inflammatory activity tests on mice with the carrageenan and formalin edema models indicated that esters (Figure 9c) and (Figure 10a) exhibited anti-inflammatory properties comparable to the effect of ortophen (diclofenac) [17]. Compound 11e was found to suppress the expression of cytokines interleukin-6 (IL- 6) and monocyte chemotactic protein-1 (MCP-1), as well as that of prostaglandin synthase-2 (COX-2) in addition to iNOS. The in vivo anti-inflammatory effect of compound 9 was indicated via significant suppression of the carrageenan-induced paw inflammation in mice [18] (Figure 4).

Barbara Zdzisinska et al. examine the ability of betulin and betulinic acid to induce and modulate cytokine production in human whole blood cell cultures. The findings indicated that betulin could induce a low but detectable level of TNF- in human leukocytes, however, it was ineffective in the induction of other pro- inflammatory cytokines such as IFN- andanti-inflammatoryIL-10. In contrast to betulin, betulinic acid was ineffective in cytokine induction [19].

Anticonvulsant Action: It is reported that betulin were can bounded to the brain neurotransmitter y-amino butyricacid (GABA)-receptor sites in mice brain in vitro and antagonized the GABAA-receptor antagonist bicuculline-induced seizures in mice after intra cisternal and intraperitoneal administration. Neither betulinic acid nor lupeol bound to GABAA -receptor nor did the inhibit bicuculline-induced seizures in vivo [21].

Cytotoxic Activity: Betulin (Figure 1) and betulinic acid (Figure 3) are cytotoxic lupane-type triterpenoids widely distributed in nature [22-23]. Charles Gauthier and co-workers synthesized seven bidesmosides (Figures 14-17), containing D-glucose, L-rhamnose, and L-arabinose moieties starting from the parent triterpenoids betulin and betulinic acid and the natural bidesmosidic betulinic acid saponin 3, which exhibited noticeable cytotoxic activity against J 774. A1, HEK-293, and WEHI-164 cell lines and was more active than glycosides with aglycones of oleanolic acid or hederagenin. The structure-activity relationship (SAR) study of eight bidesmosidic saponins exhibited that the cytotoxicity was influenced to a great extent by the nature of both the aglycone and the sugar moieties. Bidesmosides Figures 17a-17b bearing a-L-rhamnopyranosyl moieties at both C-3 and C-28 positions were highly cytotoxic. According to the preliminary results, it is predicted bidesmosidic saponins with aglycone of betulin or betulinic acid may have clinical potential as anticancer agents [24]. Eight derivatives of betulin and betulinic acid were used as starting materials to synthesize a series of pyrazines and benzopyrazines, which were then tested for cytotoxicity against a variety of cancer cell lines. Significant cytotoxic activity against A549, K562, and multidrug- resistant K562-tax cell lines was found in pyrazines 19a, 19d, and 19e. compared with cytotoxicity of the known starting materials [25] (Figure 6).

Anti-Tumor Activity: The antitumor activity of betulinic acid and its derivatives exhibit a high activity against several tumors and cancers, such as Melanoma [26-31], Leukemia [3235], Prostate carcinoma [36], while normal cells are unaffected by betulinic acid, indicating selectivity [37]. However, recent study showed that betulin induces cell death more rapidly than betulinic acid, but a higher concentration of betulin is needed to amount to similar cell death. Moreover, cholesterol sensitized cells to betulin-induced apoptosis, while there was no effect of cholesterol when combined with Betulinic acid [38]. It's reported that synthetic derivatives of betulin can inhibit Semliki Forest virus (SFV) replication which is first reported. 3,28-di-O-acetylbetulin (Figure 20) was the most potent for anti-SFV activity. Betulinic acid , 28-O-tetrahydropyranylbetulin (Figure 21), and a triazolidine derivative (Figure 22) were also shown to inhibit Sindbis virus [39].

The activity of betulin-3, 28-diphosphate (BDP) in combination with the cytostatics such as 5-fluorouracil (5-FU) and hydrazine sulfate (HS) was demonstrated by using the transplanted Ehrlich ascites carcinoma (EAC) in mice. The combination drug of 5-FU with BDP caused the synergetic decrease of the lipid peroxidation (LPO) intensity compared to pure compounds. Betulin-3, 28-diphosphate in combination with cytostatics for EAC treatment improved the animal health status, as well as decreased the cytostatics dose that can be used in palliative therapy [40] (Figure 7).

Anti-Leishmanial Activity: Several synthetic betulin derivatives and their anti-leishmanial inhibition activities were tested by Sami Alakurtti and co-workers. Oxidation of betulin 1 at C-28 and C-3 showed the beneficial impact on the inhibition activity. Oxidation of the C-28 aldehyde to the corresponding carboxylic acid (Figure 23) and betulonic acid (Figure 24) improved anti-leishmanial activity further. It is concluded that a carbonyl or carboxyl group seems to have a beneficial effect in anti-leishmanial activity [41]. Compared to betulin and betulinic acid, 9 triphenyl phosphonium derivatives demonstrated highest anti schistosomal activity against adult S. mansoni. Triphenyl phosphonium derivatives were obtained from available natural betulin by simple transformations, rendering it practical and useful for large scale application [42]. Three betulin derivatives inhibited parasite migration at pico- to nanomolar concentrations, suggesting that they impair host-parasite interaction. None of the tested betulin derivatives was cytotoxic against J 774. A1 macrophages thus indicating their potential as starting points to develop compounds that might affect parasite-host cell interaction, as well as being leishmanicidal [43] (Figure 8).

IntroductionDistribution and Isolation of Betulin

Betulin can be found widely throughout the plant kingdom. However, one of the most widely reported sources is the birch tree (Betula spp, Betulaceae), where it can be found in high amounts (132. 45 ~257. 11mg/g) [46]. Many Figures are used for the extraction and isolation of betulin and other related triterpenoids. Typically, dry plant material is extracted with CHCl3. Betulin wilt high purity was obtained by recrystallization and isopropanol was a suitable solvent for recrystallization of betulin [47]. The useful and green method processing primary extracts with stable monoterpenes -limonene, pinane and hydrogenated turpentine oil ensured separation of pure betulin (95-97%) with high yields (75-82%) and the effective recycling of extractants was developed (81-87%) [48].

Betulin is a natural product that is available from many plant species in significant yields [49], especial from birch bark (up to 30% dry weight) [50]. Because of the pharmacological effects of betulin and its analogs, extensive studies have been carried out by many researchers. In the past, most derivatives are synthesized by chemistry due to its many advantages. Betulin possesses three positions in its structure, hydroxy group at position C-3, hydroxy group at position C-28 and alkene moiety at position C-20, where chemical modifications can be easily performed to derivatization for structure-activity relationship (SAR) studies. Besides, position C1, C4, C5, C7, C11 can be also modified. But microbial transformation is more and more popular to researchers because so many reactions can be performed by biotransformation. Microorganisms possess enzyme systems which have significant regio and stereoselectivity's. Obviously, the hydroxylation at the saturated ring is very common and easy by bioconversion while it is difficult for chemical synthesis. The rare configuration transformation can be happened in bioconversion [51]. As early as 2002 [52], Chaetomium longirostre were used to transform betulin and its oxidation product- betulonic acid. As a result, 4,28-dihydroxy-3, 4-seco-lup-20 (Figure 29) en-3-oic acid (Figure 27), 4-hydroxy-3, 4-seco-lup-20 (Figure 29)-ene-3, 28-dioic acid (Figure 28) were synthesized from betulin , and 4, 7a, 17-trihydroxy-3,4-seco-28-norlup-20(Figure 29)-en-3-oic acid (Figure 29) and 7a, 15R-dihydoxy-3-oxolup-20 (Figure 29)-en-28-oic acid (Figure 30) were synthesized from betulonic acid. Moreover, these four products exhibited the more potent activity. Therefore, biotransformation is a good choice to synthesize betulin derivatives except for chemical method (Figure 9).

Betulin is a remarkable natural product which can be obtained from a variety of botanical sources. The high availability of betulin from the bark of birch trees makes it a potentially important raw material as the precursor of biologically more active compounds. Betulin can be converted into many kinds of derivatives by chemical synthesis and biotransformation. Betulin 1 can be easily transferred into betulinic acid 3, which has shown to possess wide spectrum of biological activities. Betulin and many of its derivatives exhibit great promise as bioactive agents for the treatment of inflammation, antifungal activity, antiviral activity, HIV infection and many kinds of cancers. The review summarizes the distribution of betulin, biological activity of betulin and its derivatives, synthesis methods of betulin derivatives, that provides reference for further research.

This work is supported by the National Nature Science Foundation of China (21462057, 21172267), National First-Rate Construction Discipline of Guizhou Province (Pharmacy) (YLXKJS- YX-04) and the Fifth Batch of Talent Base in Guizhou Province (2016).