Retinal artery occlusion (RAO) is uncommon before the age of 40 years. Bilateral RAO at young age are extremely rare. The etiology of RAO is usually associated with atherosclerotic risk factors and the presence of intravascular or intracardiac embolic material. In young adults, RAO may be manifestation of heart pathologies or inherited or acquired thrombophilia. We discuss characteristics, diagnostics and important clinical implications basing on the case of a previously healthy, non-smoking, non-hormonal therapy, a 33-year-old female with bilateral non-simultaneous RAO.

RAO is an ophthalmic emergency causing acute ischemia of the area supplied by the vessel, thus resulting in retinal necrosis and partial or complete, with transient or persistent loss of vision acuity. It affects most commonly patients of over 60 years of age and it may concern 1/10 000 general population. RAO most often affects one eye but may be bilateral in 1-2% of cases. The etiology of retinal artery embolism is usually associated with carotid atherosclerosis (in the course of arterial hypertension, diabetes mellitus, hyperlipidemia or smoking addiction) and heart valve pathologies [1,2]. Thromboembolic diseases within the vessels of the eyes are rare in young people, with neither metabolic nor haemostatic abnormalities. In this paper particular attention was given to detailed diagnostics, through which it is possible to identify cardiovascular disorders, their proper treatment, which is associated with improved outcome in terms of another embolic incident and survival in this group of patients.

A previously healthy, non-smoking, a 33-year-old Caucasian female presented to an emergency ophthalmological service with a sudden onset of painless, transient blurred vision in her right eye. She denied other systemic symptoms. There was no history of oral contraception use. The family history was negative. Ocular examination revealed best corrected visual acuity of 1,0 bilaterally. Biomicroscopy and intraocular pressure was normal in both eyes. A calcified white embolus was noted at the bifurcation of the superior temporal artery in her right eye together with mild retinal edema and pallor. No remarkable finding was observed in the posterior segment of the left eye. In OCT (DRI OCT Triton, Swept Source OCT; Topcon, Tokyo, Japan) without retinal changes in the macular area. Figure 1 shows the relevant retinal imaging studies. Visual field testing (Humphrey Field Analyzer; Carl Zeiss, Jena, Germany) disclosed an inferior temporal visual field defect in the right eye (Figure 2). With a diagnosis of right BRAO, the patient was treated with ocular massage, anti-glaucoma drops, pentoxifylline and anticoagulant and antiplatelet medications. On the first day of admission, the patient had an episode of vision loss in her left eye to hand motion. A relative afferent pupillary defect was identified on the left side. Examination of the left eye fundus revealed markedly slowed blood flow in narrowed retinal vessels, with “fragmentation” of the blood stream (cattle trucking) and whitening of the edematous retina surrounding pink central macula (cherry-red spot) (Figure 3A).

Figure 1: Colour fundus photographs of both eyes on admission.

(A) BRAO in right eye (mild whitening of the retina surrounding the superior temporal artery). 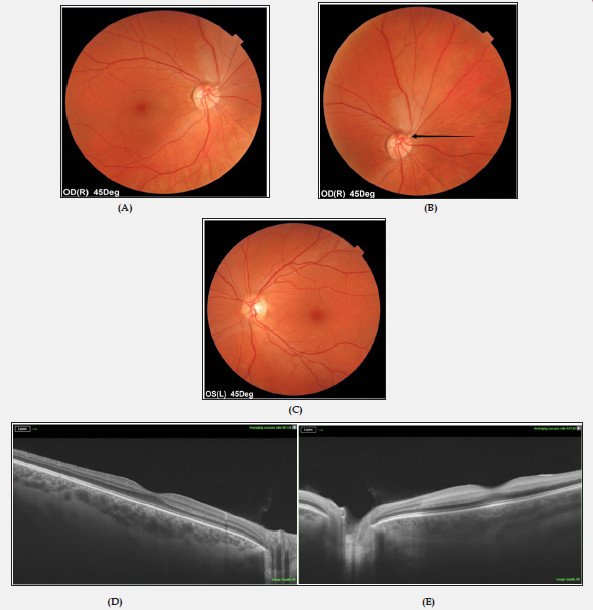 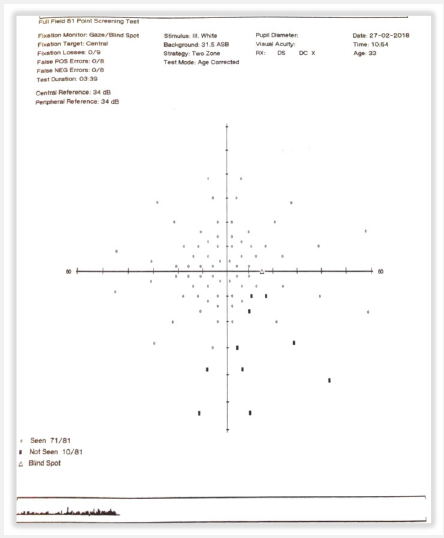 Figure 3A: Imaging studies performed at the time of CRAO in the left eye.

(A) Fundus photography shows swelling of the macula with cherry-red spot. 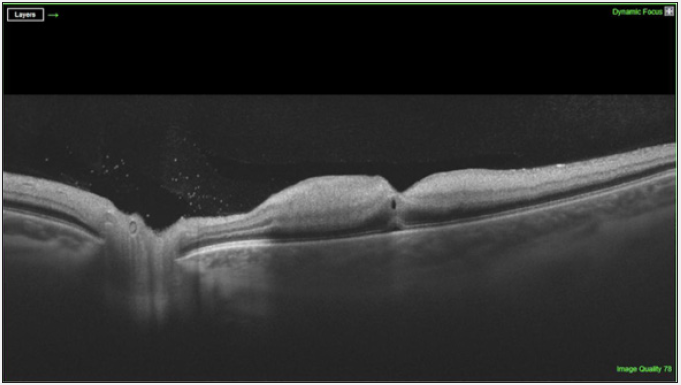 Bilateral RAO at young age are extremely rare. Graven and colleagues [3] reported 21 patients (age range, 22 to 38 years) with RAO, of which 6 cases had bilateral BRVO. Hua et al. [4] described bilateral CRAO in 20-year-old female with systemic lupus erythematosus. Recently, Kinori et al. [5], however, have presented case of bilateral CRAO in a previously healthy 15-year-old girl. The mechanism for RAO before the age of 40 years is somewhat different than in patients of over 60 years of age because atheromatous vascular disease and its risk factors are typically absent [5]. In young adults, RAO may occur via multiple mechanisms, and investigations for systemic abnormalities are often exhaustive [1,5]. Our patient’s history showed that bilateral non-simultaneous RAO was probably associated with a paradoxical embolism. Although routine diagnostic work-up including TTE were negative, TEE could establish a suspicion of a PFO. Kramer et al. [6] found TEE to have higher yield than TTE in the evaluation of patients with RAO [6]. As so far, few cases of PFO-related emboli have been published [7-9]. There was also weekly positive related factor, such as mutation in the MTHFR 1298 gene that can lead to elevated homocysteine in the blood (not in our patient), and thus be the cause of congenital hypercoagulability implicated as a risk factor for cardiovascular diseases. However, the role of this mutation in RAO pathogenesis remains controversial [10].

Proper diagnosis of RAO patients may allow to detect unrevealed cardiovascular disorders. At young age, RAO may be manifestation of heart pathologies, previously asymptomatic or the cause may be multifactorial. Due to the fact that half of potential retinal artery emboli visible in TEE are not detected in TTE, TEE also allows for the assessment of PFO, routine TEE in differential diagnosis of RAO is indicated in all patients without cardiovascular risk factors. This example underlines the importance of a multidisciplinary approach.