Effects of S-Allyl Cysteine on Insulin Secretion: A Proposed Mechanism for its Anti-Hyperglycemic Effects Volume 6 - Issue 3

Background: World is now moving towards the natural therapies due to many reasons not the topic of discussion. Majority of the available allopathic drugs are derived from the natural primary sources either from the animals or plants. Garlic and its derivative have been tested for many illnesses like hyperlipidemia, anti-platelet aggregation and HTN the current study focused on exploring the mechanism of glucose lowering properties of the S-allylcysteine, a garlic derivative.

Methodology: Rats were randomly divided into 3 groups with 10 rats in each group A was +ve control with no intervention, group B was kept –ve control given alloxon to induce hyperglycemia only, group C was given alloxon and S-allylcysteine . Blood sample were drawn after 7, 14 and 21 days to assess glucose random levels and plasma insulin concentrations. SPSS version22 using ANOVA as statistical technique was applied for data analysis.

Diabetes Mellitus is one of the oldest diseases of the world called as jual bakar in the ancient times that means the cow’s hunger disease. Strategies to tackle to this problem were adopted since then till now the well-established treatment regimen and guideline are available. Huge numbers of the drugs from insulin verities to oral agents have benefited the diabetic community a lot and the process of discovery of new options is still going on. Search processes for the prevention of diabetes from the cellular levels to the complications for setting the targeted goals for the medical practioners are on. The main problem with the allopathic drugs is their side effect profile weight gain and hypoglycemia with insulin and sulfonylurea’s and renal failure and vitamin B12 deficiency with bigunides so on and so forth. The world is switching towards the natural remedies surprisingly with a lot of number of certifications in different alternative medicine practices from country to country. S-allyl cysteine is a garlic derivative has been worked upon by numerous researchers for its medicinal potentials e.g. antihypertensive, antiplatelet, anti-atherosclerosis, anti-hyperlipidemic and GI diseases [1-3].

Garlic and its derivatives has also been proved to possessanti-proliferative, anti-metastatic effects and inhibition of apoptotic celldeath [4,5]. Alliin is the principal ingredient of garlic (6-14mg/gram) and sulfide derivative of cysteine (S-allyl cysteine sulfoxide) which is store in garlic under low temperature and get converted from alliin to allicin also termed as garlicin by action of allinase [6,7]. Other components of garlic responsible forits effectsare fibers, selenium and polyphones. Garlic is water soluble so more stable but problem with intestinal absorption [8]. Garlicis cheaper and easily available worldwide previously we worked out its glucose lowering potential and found it comparable to glibenclamide [9,10]. Our present work was focused on to explore effects of s-allyl cysteine on insulin secretion by pancreas as a justified mechanism of action for these hypoglycemic properties.

The animal model was set for experiments following ethical approval by ERC (ethical review committee) of Isra University. Rats of adult size (150-200grams) were purchase from animal house of institute. International protocols for animal handling for adopted regarding acclimatization, temperature, and day night cycle, water and food supply. Animals were divided in 3 groups A, B and C .Group was considered control group and kept as non-interventional, while Group B was induced with alloxon 120mg/kg for destruction of pancreas and group C was co-administered S-allyl cysteine along with alloxon120mg/kg 10. Blood sample were drawn at 1st, 2nd and 3rd weeks from tail, cardiac puncture and finally scarifying under anesthesia by cervical dislocation. Serum insulin levels were measured in Isra University Hospital Research lab.

Mean and SD were compared between weeks for individual groups keeping <0.05 level of significance. ANNOVA was used on SPSS Version 22. 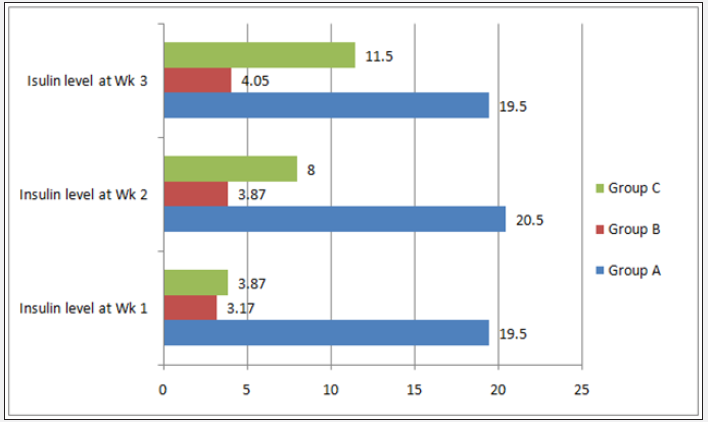 Our current results were consistent to findings described by Augusta KT et al. [11] the difference was of in vivo and in vitro between the two [11]. Similarly SMA Shariatzadeh [12] also reported a 45% reduction in blood glucose levels in garlic treated rats which is parallel to what we report here however he induced diabetes with s streptozotoc in while we used allxon for this purpose and he did not monitor the insulin levels as well [12]. Sekh A N [13] also reported low glucose levels in garlic treated group supportive our findings [13]. Study of Fatma A A [14] proved similar increase in serum insulin levels following garlic oil therapy [14]. Few researchers also suggested multiple mechanism for glucose reduction by garlic along with insulin secretion that include increasing insulin sensitivity and GI flora regulation that interfere with carbohydrate absorption.6 Cheng-TzuLiu [15] also reported reduction of FBS and elevation of serum insulin as well as the reduction of serum oxidative stress [15]. It is proposed by Henriksen et al. [16] for increased oxidative stress to disturb the signal cascade of insulin secretion through p38 MAPK stimulation [16]. The expression of GLUT4 is repressed in adipo cytes by enhanced oxidative stress and impairs the binding of nuclear proteins to the IRL (insulin-responsive element) in the GLUT4 promoter according to Pessler-Cohen et al [17]. It is also demonstrated by Rajani Kanth et al [18] for garlic extract to attenuate the oxidative stress in intestinal as well as hepatic and tissues in diabetic rats along with improvement in GLUT4 expression as well as it reverses the insulin resistance [18].

Human studies are recommended in diabetic population using garlic supplementations along with the rational treatment options.