Background: Clustered Regularly Interspaced Short Palindromic Repeats (CRISPR) is a part of an adaptive immune system in prokaryotes and occurring in diverse forms of bacteria.

Case Presentation: We presented the results of sequence analysis which can help in understanding the presence of CRISPR-mediated antiphage ability in both pathogenic and non-pathogenic strains of Escherichia coli.

Conclusion: Endogenous CRISPR spacers with imperfect matches are the candidates of anti-phage function in genetically distant strains of E. coli.

CRISPR is an acronym that stands for Clustered Regularly Interspaced Short Palindromic Repeats. It is an important part of an adaptive microbial immune system that occurs in wide varieties of bacteria [1]. CRISPR I and CRISPR II are two types of CRISPR elements that have been recognized in the Escherichia coli K-12 strain. CRISPR I is followed by eight cas genes namely, cas1, cas2, cas3, casA, casB, casC, casD and case in CRISPR element I. The last five genes encode the proteins to form a Cascade like complexes. Two genes cas1 and cas2 are responsible for adding exogenous spacers in to CRISPR region which lies near the leader sequence [2]. However, CRISPR II element is not found to be surrounded by such cas genes [3]. The procurement of new spacers provide host with an immunological memory to distinguish an invaded DNA molecules. The functional mechanism of CRISPR/Cas system is a hierarchical process. The results from our previous study indicated that two endogenous spacers; CR1-7 and CR2-6, which are relatively conserved can hinder replication of P1 phage in E. coli K12 strain [4]. However, the comprehensive correlation between the CRISPR spac ers of pathogenic and non-pathogenic strains of E. coli and their phages still remains unclear.

In this case study, we demonstrated the results of sequence analysis which can help understanding the presence of CRISPR- mediated anti-phage ability in pathogenic and non-pathogenic strains of E. coli. We collected E. coli spacers from CRISPRdb [5] and applied BLASTN program to compare the similarity between these spacers with the genome sequence of several Enterobacter phages, including P1, P2, T4, T5, T7, λ, ɸX147, MS2, Qβ, and M13. The different spacers targeting the same phage were found in genetically distant strains (Supplementary File 1). Moreover, multiple spacers against the same phage were found in many strains, which was similar to the presence of multiple P1 specific spacers in E. coli K12 strain (Supplementary File 2). The results indicated that the CRISPR/Cas system in E. coli had actively acquired spacers from the phage which infected them rather than a random event that occurred when searching for base pairing between short sequences. 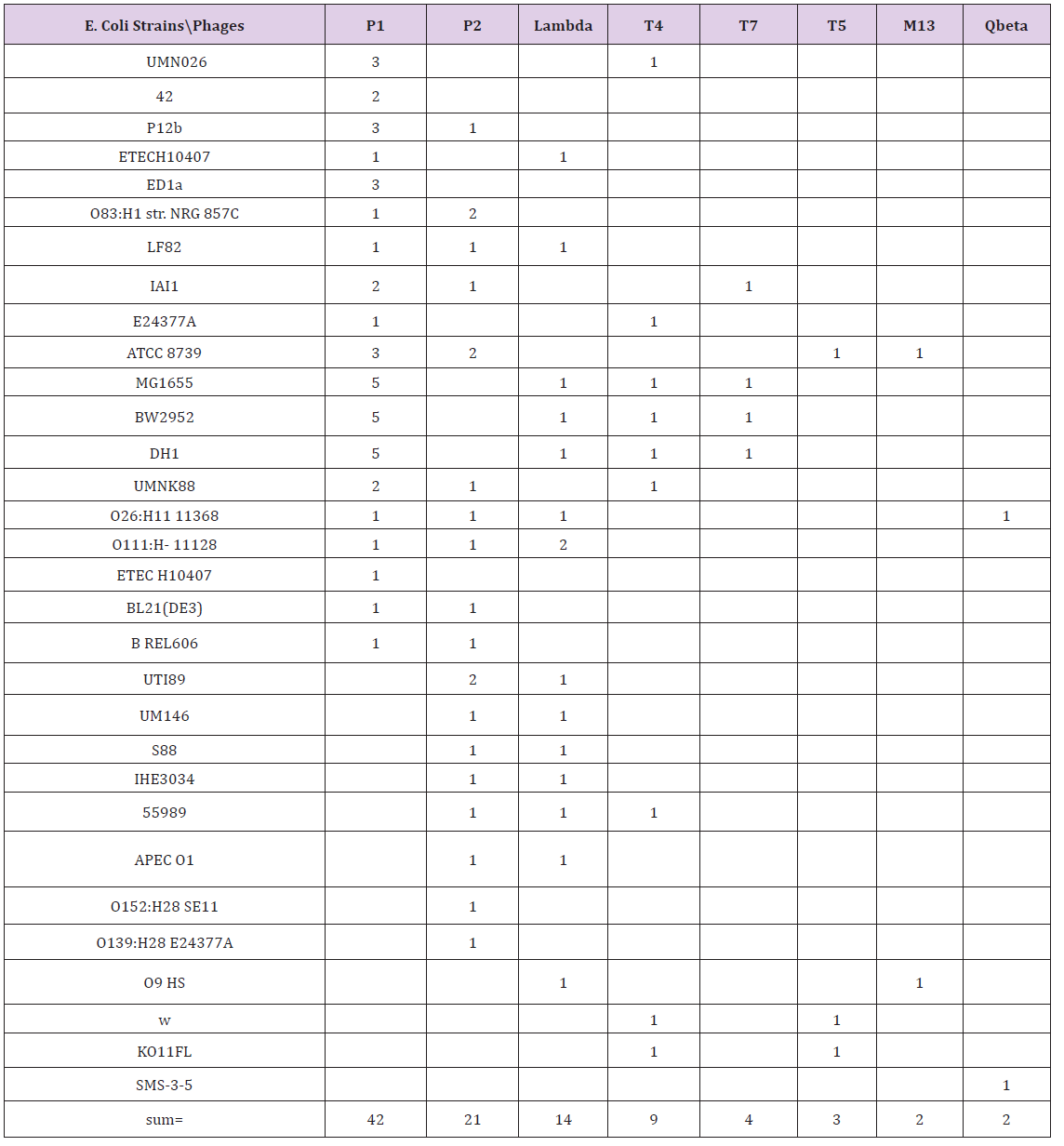 The parameters used in BLAST are the same as a default setting, but only matches have base-pairing region spanning greater than 15 base-pairs were reported here.

This idea is further supported with by the fact that E. coli 42, UMN026, and P12b display almost nearly ideal matched spacers against P1 phage. We also found that several strains carried the same anti-P1 phage spacer as that of E. coli K12. E. coli DH1 and BW2952 strain showed the same CRISPR sequence as those of K12 strains. A spacer found in E. coli IAI1 was similar to the seventh spacer in CRISPR I locus of K12 (25/25, 100% identical), but it can form long base-pairing region to P1 genome. Similarly, the last spacer in CRISPR II region was widespread in 11 strains (Supplementary File 2). The abundance of CRISPR spacers is shown in Figure 1. These spacers could pair with 16 nucleotides of phage sequence, which is as half the size of an E. coli type spacer. The spacers against P1 were the most abundant. On the contrary, only few spacers matched the genomes of M13 and Qβ with a statistically significant number of base pair. The general trend for all E. coli derived- CRISPR spacers was similar to that observed in the CRISPR region of E. coli K12 BW25113, which was used to conduct most of the experiments in the present case.

Figure 1: Distribution of antiphage spacers in E.coli in CRISPR database [5]. 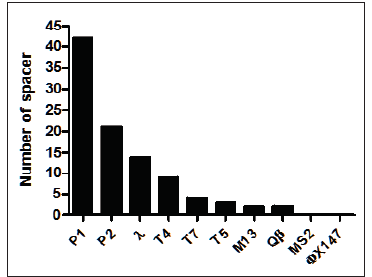 Formerly it was disclosed that the high interrelationship between multilocus sequence typing tree and spacer repertoire was an indication that the CRISPR system in various strains of E. coli has lost immune function [6]. However, our results not only demonstrated that several endogenous CRISPR spacers in E. coli K12 strains still provide anti-phage function but also found the distribution of potential anti-phage spacers is more diverse than the genetic distance indicated by a phylogenic tree[7]. Therefore, the lack of significant immune effect in prior studies might be due to the accruement of plentiful of escape mutations in bacteriophage they studied [2,8]. Provided that phages with escape mutations might be used for replication, the rivalry between phage and bacteria establishes a pressure of natural selection to both species, which is an essential compelling force for phage diversification. In addition, a CRISPR deletion E. coli protein expression strain can be used as competent cell because the plasmids are highly stable in these mutant strains due to less interference on the replication and expression of protein expression plasmids.