Scabies Prevalence and Risk Factors in Pakistan: A Hospital Based Survey Volume 2 - Issue 2

In Pakistan, scabies is considered as common skin infestation but no comprehensive study is available on its epidemiology and risk factors associated with scabies. Tendency of emergence/reemergence attributes of scabies prompted to design one year study to evaluate the epidemiological profile of scabies infestation. Data was collected through questionnaires from patients visiting the Dermatology Clinic of the Military Hospital- Rawalpindi-Pakistan. The risk factors were analyzed through Chi square and later on processed through GLMs to see their impact on the scabies. Hospital based data revealed that scabies contribution is 38.15% among dermatological disorders. The infestation was higher in males than females (53.81 vs 24.22%; p<0.05) and early school going children were the most susceptible group for this disease (46.88%; p<0.05). The scabies was more common in urban population than rural one (46.46 vs 27.2%; p<0.05).A clear trend of seasonal pattern came on record with a highest infestation in winter (63.75%) and lowest in summer (16.89%).Analysis of risk factors explained 89% of variations in disease prevalence.The current study brought strong and influential features on record which is alarming for health professionals enforcing them to design effective control strategies and awareness campaigns to reduce scabietic infestation in human community.

Scabies is a neglected contagious skin disease caused by the microscopic mite, Sarcoptesscabieivar. hominis [1]. The condition is worldwide distributed with an estimated incidence of 300 million cases per year Mimouniet [2]. Scabietic patients characteristically suffer from intense pruritus and scratching which occasionally lead to hyperkeratosis forms and secondary bacterial skin lesions [3]. The worse itching at night due to nocturnal activity of mites causes insomnia and restlessness which has negative impact on daily regular activities of patients [4]. The psychological complications due to shameful perception of this disease discourage affected individuals to seek medical attention and inform close contacts which should be also treated to ensure eradication [5]. The most effective means of transmission is direct skin to skin contact however indirect transmission via fomites is also effective especially in case of crusted scabies [2].

Recognized risk factors of scabies are close contact with an infested relative and acquired immune deficiencies for hyperkeratosis forms [6]. A range of other risk factors have been proposed, most ofthem being direct or indirect indicators of poverty at the community or infra-community level [7]. However, despite abundant literature on the epidemiology of scabies in developing countries [3,7,8]. The relative importance of the fore mentioned risk factors has been infrequently investigated. The present crosssectional interview based study, carried out in the Rawalpindi area, Pakistan, was designed to update and quantitatively substantiate previous epidemiological surveys in the Asia sub-continent, where hyper-endemic scabies still represents a major public health problem Malliket, Khan, Yasmin. [9].

The present study was carried out in the Dermatology Department of the Military Hospital of Rawalpindi, Pakistan (DDMH) which provides assistance to the families of military personnel and to the general public. Patients admitted to DDMH originate from a large and predominantly urban area at the edge of the Pothwar plateau, south of the Margalla hills, with approximately 4.5 million inhabitants (centroid at 33.43°N 73.04°E). The area is characterized by mild winters and hot summers, with monsoon rains occurring during July and August [10].

DCMH was visited by the same operator for eight working days per month throughout the year. Data was acquired by interviewing all admitted patients. The self-developed questionnaire enclosed information on gender, age, residence, itching in close contacts, social habits, and the economic status of the patient. The patients were divided into seven age groups: preschool children (≤ years), first school children (5-9 years), pre-adolescents (10-14 years), adolescents (15-19 years), early adults (20-39 years), middle adults (40-59 years), and late adults (≥ 60 years) according to [11]. The economic status of the patients was evaluated by the month family income in Pak rupees and divided into three categories: low (<15,000 Pak rupees/month), middle (15,000-50,000 Pak rupees/ month) and high (>50,000 Pak rupees/month). All interviews were carried out by the same operator. For the purpose of this study, a case of scabies was identified based on the outpatient record (including clinical diagnosis and therapy) signed by dermatologist on duty at DDMH. As reported by collaborating dermatologists, skin scrapings were also taken on approximately one third of the suspected patients and processed according to standard techniques [12]. To confirm the diagnosis. However, results of skin scrapings were not made available.

Chi square analysis was used as a test of significance for all epidemiological factors (gender, age, residence, itching in household, season, sharing and economic status) on Epi InfoTM 7 (Centers for Disease Control, Atlanta, GA, USA). With reference to age and economic status they were classified into seven and three categories respectively so chi square analysis was performed for each category separately comparing patients of that category with all others. The strength of association of each epidemiological factor with disease was estimated through odds ratio and the corresponding 95% confidential intervals. All the significant epidemiological factors were later on processed through Generalized Linear Model (GLM) with binomial distribution in R program (R core team, 2014) and the coefficient of determination R2 was calculated. All the explanatory variables (epidemiological factors) in GLM were tested against the response variable i.e. presence or absence of scabies. Scabies patients were included in infected group while patients diagnosed for any other disease were considered as controlled group. The models with and without interactions were tested for the best model. The epidemiological factors and interactions which were not significantly contributing to the variations in disease were removed from the model. The model selection was made through the evaluation of AIC value and model with lowest AIC value was selected. P value less than 0.05 was taken as significant. 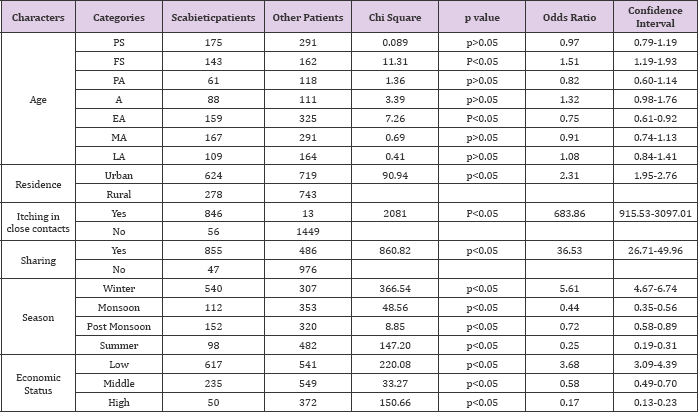 Table 3: Generalized Linear Model for the Analysis of Risk Factors associated with scabies.

The high prevalence of scabies amongst dermatologic patients in this study confirms its persisting endemic status in Pakistan. In previous studies with a similar design, prevalence ranged between 18.1 and 70.2 % of the dermatologic caseload [9,13,14]. In the neighboring Bangladesh, scabies was reported in 98% of investigated schools [15]. The higher prevalence of scabies in males has been previously attributed to different lifestyle, implying greater exposure to potential mite sources e.g. due to more intense social life in the community and the working periods far from their households [2,9,15-18]. However, there are studies showing no sex- related differences [19,20]. And other studies reporting higher odds of infestation in females [21-23]. Interestingly, stratification of the prevalence data by sex and age in this survey showed that scabies was more prevalent in males since the youngest age classes, when differences in lifestyle are clearly far to be applicable justification. We have no explanation for the observed differences, though we may suspect an occult culture related bias.

The higher prevalence of scabies in first school children is not surprising, since schools - a group setting in which people with different epidemiological background are in close contact and share supplies and equipment - are known to inherently foster the transmission of several infections [http://www.cdc.gov/ healthyyouth/infectious/]. On the other hand, the limited range of the odds in Table 1 suggests that the investigated age-related differences were not remarkable, and that age groups in this study were almost equally susceptible to scabies, with negligible if any role for herd immunity. This is consistent with studies conducted in Pakistan [9], Brazil [20]. And the West Bank, Palestinian Territories [19]. Similarly to [22-25]. Scabies was more prevalent in winter. During this season, fertility of the mites - determined by the number of eggs in the mite burrow - is reportedly higher [26]. And their off-host survival is enhanced by the higher humidity and lower temperature [7,8,22]. Moreover, increased physical crowding of individuals during the cold season may contribute to seasonality of scabies [26].

No or little seasonal difference was found in study areas with less contrasted climate [11,20]. Crowding may also justify the higher prevalence of scabies in urban vs rural patients, which is consistent with findings in Brazil, where scabies was twice as prevalent in a densely populated urban slum as in a rural community where families lived in larger spaces [20]. And in UK [24]. In contrast, prevalence was higher in rural vs urban settings in Poland, due to lower social and material status of the rural communities and their hampered access to the medical services [22]. As expected [3,8,18]. Infection in close contacts was by far the single most significant risk factor, suggesting that the large majority of scabietic patients were directly or indirectly (via fomites) infected by other family members and/or housemates. Coupled with the high prevalence of the disease in the studied population, it calls for the necessity of fomite precautions and of treatment of asymptomatic family members and physical contacts of all cases of scabies [27]. And the awareness still to raise on its principal transmission patterns. Interestingly, a recent interview study amongst general medical practitioners (GMPs) in Pakistan have demonstrated a diffuse "lack of knowledge regarding various aspects of scabies" and recommended an active intervention to improve their awareness, so that scabies will be identified and treated appropriately and valuable information will be provided to patients and communities [28].

The complex relationships between low socioeconomic status, overcrowding, risk behavior, proportion of individuals infested, and the spread of S. scabiei in the developing world have been clearly addressed in the recent literature [11,14,15,29]. In this study, evidence showed that scabies was remarkably more prevalent amongst lower income groups, and that risk behavior, namely sharing of household items, was also more common in these cohorts. Though other aspects were not specifically investigated in our questionnaires, we hypothesize that poverty in the study area may also mirror on awareness (e.g: ignorance of the disease until it becomes a major threat at the family level), stigma associated with the disease, and the restricted access to health care, which delays diagnosis and jeopardize the efficacy of treatment. Generalized Linear Model (GLM) was used to estimate the contribution of epidemiological factors to the variations in disease. The epidemiological factors in this study were able to explain 89% of variations. We did not find any significant interactions as each epidemiological factor was independent for its contribution in disease. There were many biased in study as it was conducted only in dermatology, hospital was in urban area and data of all patients was not collected due to survey in eight working days in a month. A broad comprehensive population based study with more epidemiological and climatic factors should be designed to extend our knowledge of risk factors associated with scabies.

The high prevalence of scabies in the study area calls for programs to control this neglected disease and public health problem in the general population, with a special attention to poor communities. Programs should integrate the availability of effective and user friendly pharmacological treatments with efforts to improve the socioeconomic conditions, and specific education programs [29]. Suggested targets of the last ones are:

i. First school children, a risk category who may convey valuable first-hand information to their families;

The authors thank to Higher Education Commission-Islamabad, Pakistan for financial support under 5000 indigenous fellowship program. The authors declare that there is no conflict of interest.