Breast cancer is one of the most common malignant tumors in women, and a malignant tumor occurring in ductal epithelium of the breast. Estrogen is involved in the growth and differentiation of mammary epithelial cells in hormone dependent tumors. It plays an important role in the occurrence and development of breast cancer [1]. Estrogen mainly acts through the estrogen receptor expressed in the nucleus, that is, by binding with estrogen receptor (ER) to form a complex [2]. Research shows that ERα is expressed in normal breast epithelial cells less than 10% but expressed in breast cancer cells around 50%-80%. ERα has become an important target of endocrine therapy for breast cancer [3]. Currently, antihormone therapy is commonly used in breast cancer patients with ERα expression, which controls estrogen levels through regulating estrogen receptor activity. ERα mediates the E2 up regulation of PI3K/Akt signaling pathway and promotes cell proliferation [4]. Compounds that can antagonize ERα activity may be candidates for treatment of breast cancer. For example, tamoxifen and renoxifene are the ERα antagonists for clinical treatment of breast cancer [5]. In order to screen potential active compounds, a potential compound model is usually established to collect compounds and bioactive data by targeting the specific estrogen receptor subtype targets associated with breast cancer. The quantitative structureactivity relationship (QSAR) model of compounds was constructed with the biological activity descriptor as the independent variable and the biological activity of compounds as the dependent variable. The model was used to predict the new compound molecules with good biological activity or guide the structural optimization of existing active compounds. A compound that wants to become a candidate drug, besides having good biological activity (here refers to anti breast cancer activity), also needs to have good pharmacokinetics and safety in human body. It is called ADMET property, including absorption, distribution, metabolism, excretion and toxicity. When determining the biological activity of a compound, it is also necessary to consider its ADMET properties as a comprehensive consideration. In this paper, the coupling degree between bioactivity descriptor and ER activity is verified by BP neural network. After determining that the screened bioactivity descriptors can indeed affect ERα activity to a great extent, the ADMET property of bioactivity descriptors is further verified. 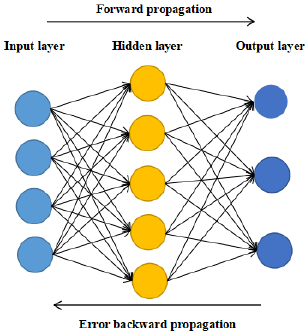 Its operating principle is shown in Figure 2. 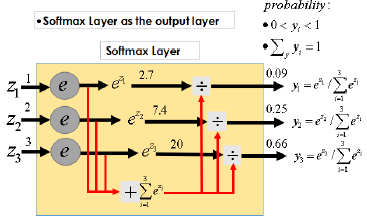 Where α is the step length, β ;β ε [0,1] is the momen estimation of exponential decay rate, and f(θ) is the random objective function of parameter θ. Adam algorithm will be used to optimize the parameters of BP neural network in order to accelerate convergence and improve accuracy. The model is:
• Step 1: Initialize the network weight and bias, give each network connection weight a small random number, and each neuron with a bias will also be initialized to a random number.
• Step 2: Forward propagation. Input a training sample, and then calculate the output of each neuron. The calculation method of each neuron is the same, which is obtained by the linear combination of its inputs.
• Step 3: The gradient descent method is used to calculate the error and carry out back propagation. The weight gradient of each layer is equal to the input of the connection of the previous layer multiplied by the weight of the layer and the reverse output of the connection of the next layer.
• Step 4: The weight gradient in the third step is used to adjust the network weight and neural network bias.
• Step 5: Back propagation, Adam algorithm is used to accelerate the weight adjustment, initialize the moment vector and exponential weighted infinite norm to 0, update the parameters through vector operation, and iterate in t time from step size to 1. Sort errors and return.
• Step 6: At the end of judgment, for each sample, judge if the error is less than the threshold set by us or has reached the number of iterations. We’ll finish training, otherwise, return step 2. 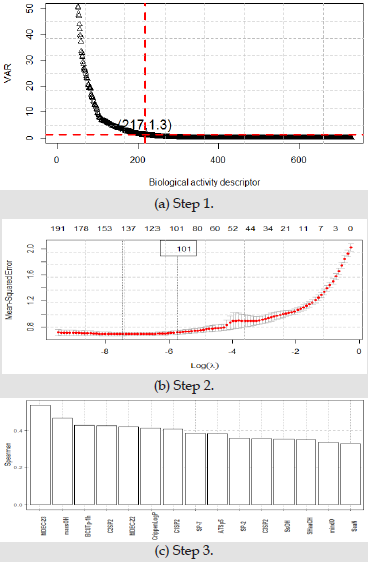 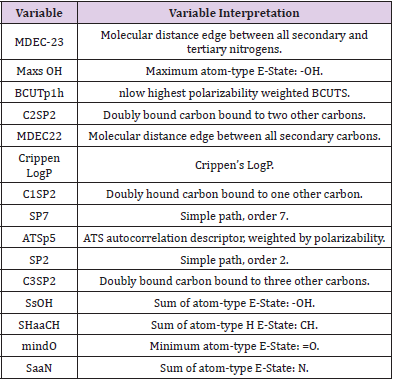 In order to avoid over fitting and improve the generalization ability of the model [10], we cut the remaining 15 bioactivity descriptors into 80% of the training set and 20% of the test set. Considering the coupling and the nonlinear relationship between the data, the neural network is used for training and prediction, the training set is used to set the model parameters, and the test set is used to calculate the default accuracy and verify the rationality of the model. When training the model, we should also consider the convergence speed of the model. Neural network is a complex structure with large amount of calculation. When there are too many input variables in the input layer and the amount of data is too large, gradient optimization algorithm is usually used to accelerate the convergence speed of neural network. Adam algorithm is used for model optimization in this paper. The results are as follows: 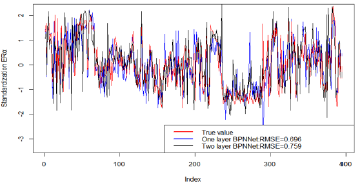 Figure 4: The predict of Adam-BPNNet. 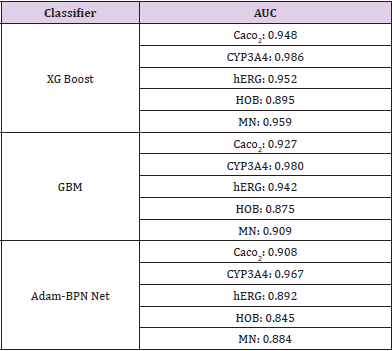 We have no conflict of interests to disclose, and the manuscript has been read and approved by all named authors.

This work was supported by the Philosophical and Social Sciences Research Project of Hubei Education Department (19Y049), and the Staring Research Foundation for the Ph.D. of Hubei University of Technology (BSQD2019054), Hubei Province, China.