Silicate weathering contra carbonate weathering: Silicate weathering is known to sequestrate carbon, e.g.: CaSiO3 + 2CO2 + H2O > Ca++ + 2HCO-- +SiO2 (soluble) [1]. Importance of this process has been discovered lately: earlier ‚Äúsilicic‚Äù bedrock was interpreted to ‚Äúpromote the acidity of soils‚Äù [2]. Carbon capture via silicate weathering has been treated comprehensively e.g. in [3], including reduction of carbon loss caused by liming agents. To some extent silicate fertilizers have been known in agricultural praxis since the 19th century [4]. The decline in soil organic carbon (SOC) from mineral cropland soils estimated by data from 1974- 2009 has been ca 0.4 %/ha/a, i.e. ca 220 kg/ha/a [5]. Carbon loss has generally been associated positively with annual management practices and negatively with clay soils [5]. Biogenic amorphous silica can increase water-holding capacity of soil [6], which could resist erosion and support the maintenance of carbon balance. Independently on universal guiding for cropland liming [7], relative regional differences in cropland soil pH-values have stayed stable for decades [8]. The aim of this study is to clarify associations of humus content and pH of mineral soils with silicate weathering factors: groundwater silicon (Si.gw), temperature (Temp) and sum of soil soluble (Ca+Mg+K) [(Ca+Mg+K).min.68] and soil-type (clay proportion in fine mineral soils, Prp.(clays/fims)). Inter-periodical changes are assessed by pH from periods 1966-1970 (‚Äú68‚Äù) and 1986-1990 (‚Äú88‚Äù) and by Temp values from periods 1961-1990 (‚Äú(61-90)‚Äù) and 1981-2010 (‚Äú(81-10)‚Äù). 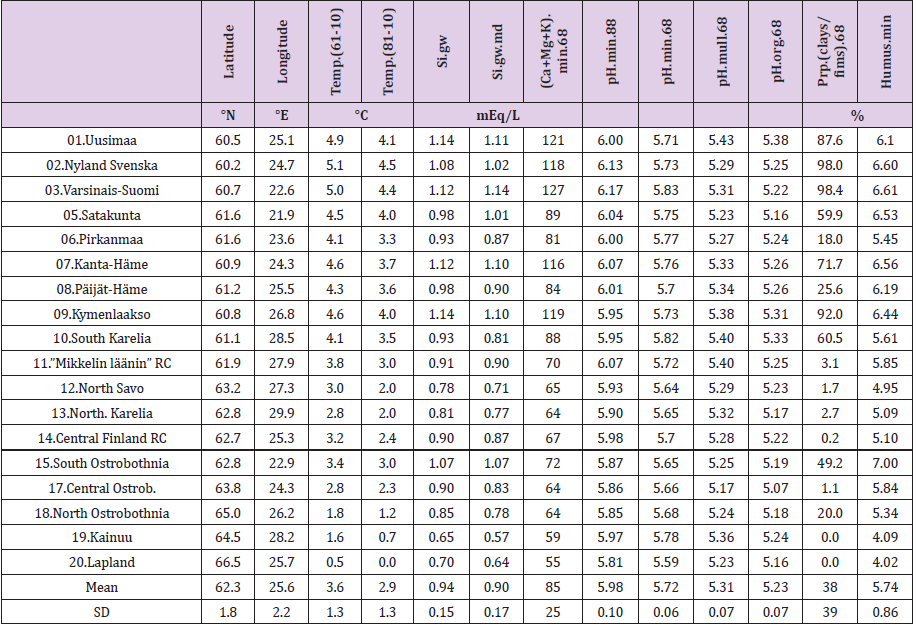 Ostrobothnia is excluded because of its high deviation between mean and median Si.gw [18] and additionally because its soil acidity, which is obviously regulated not only by silicates and humus, but by sulfur and iron compounds [19]. In Finnish experimental stations between 1960 and 1981 agricultural humus content was reduced in 13 fields and increased in 2 fields, on an average the humus content was reduced from 7.4 to 6.0 %, i.e. annually 9 % [20]. By data in [16] the mean humus content in Finnish mineral soils in 1960-70 (with midpoint in 1965) was 5.95 by all samples, by all RC’s 5.80, by selected RC’s 5.74. Values from [16] although they obviously under-estimate, are used as such. Approximates for soil organic carbon content [SOC] can be attained by multiplying humus-% by 0.58 [21] (Table 2). For clarity sometimes postfix “60’s” is added to [Humus.min]: [Humus.min.60’s]. Latitude [Lat] and longitude [Long] are given for further discussions. [Lat] is given as a reference for [Temp]. Regressions are performed by IBM SPSS Statistics 27. (Figure 1a) shows distribution (proportions, occurrence o) of soil-types in Finnish Rural Centers (RC), all RC’s included. (Figure 1b) shows humus contents of Finnish mineral soils by soil classes and by Rural Centers [15], including all RC’s. Values are calculated for each humus class (i) in RC.x by proportions, occurence (o.ix) (%) and humus content (c.i) (%) e.g. value for “m” in Uusimaa = o.m.Uusimaa*4.5/Σoi.Uusimaa. (Here, for clarity of the (Figure 1b), occurrence sum does not include organic soils). Table 3 represents R squares of single regressions by [Humus.min] and [Si.gw]. For normally distributed variables the significance level of (p = 0.05) of the R square for 18 pairs of observations is ca 0.22. R square (%) values above 22 are interpreted as significant for rapid survey. Signs in parentheses are directions of the regression coefficients.

Associations of [Humus.min] with Parameters of Weathering Rate in Mineral Soils 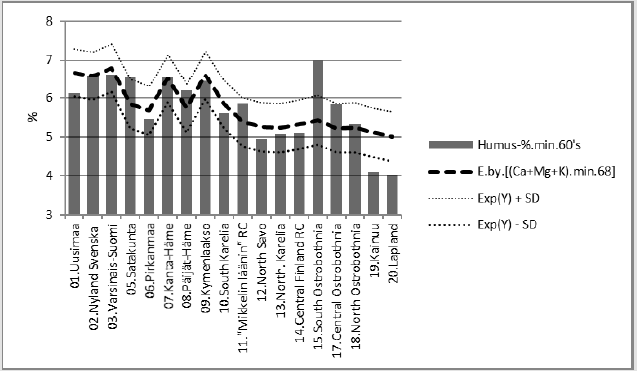 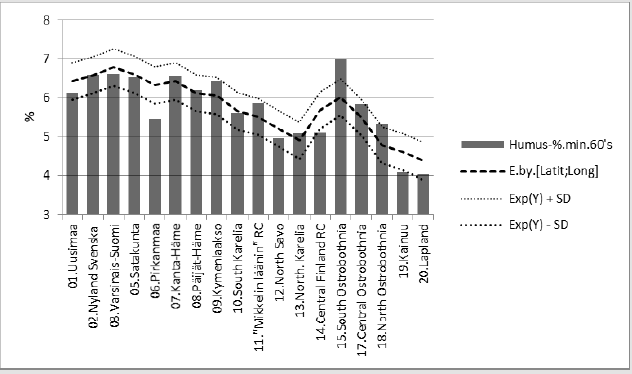 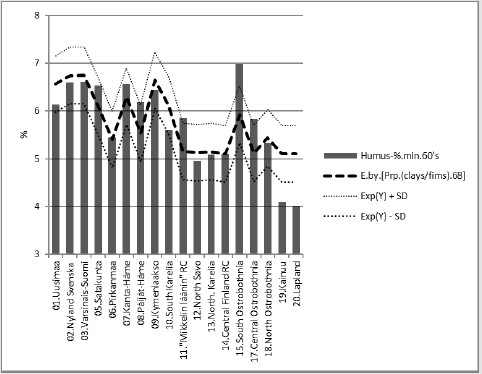 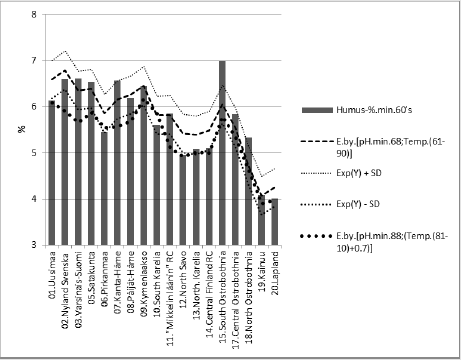 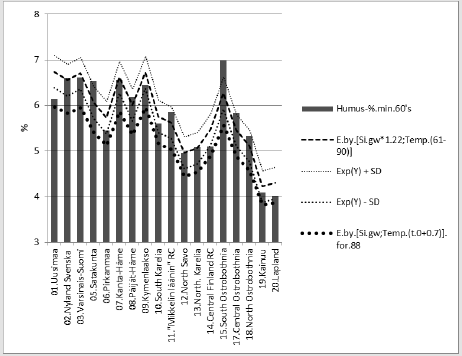 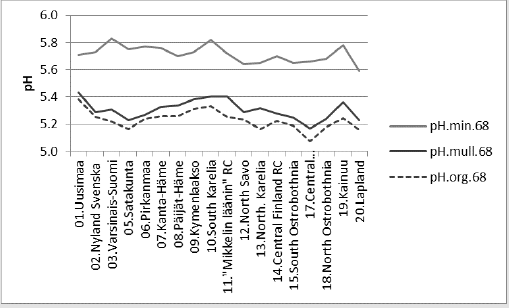 Figure 7: shows that the pH in of mineral soils is higher than that of organic soils (including mull). 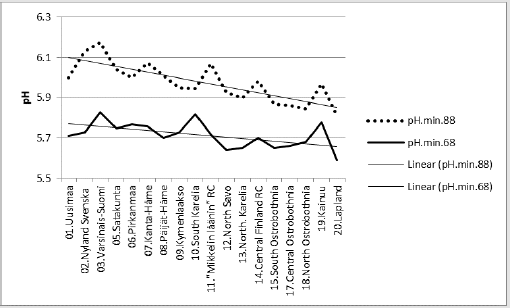 Figure 8: Suggests that similar successive pH values could have some explaining rules. 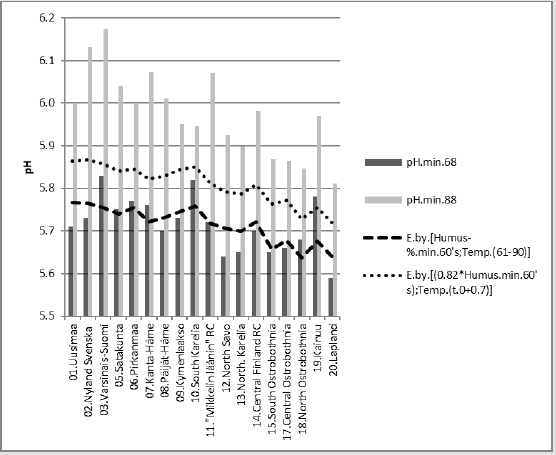 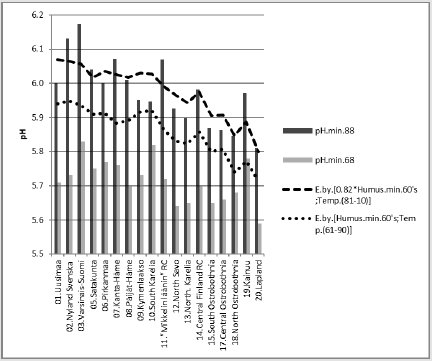 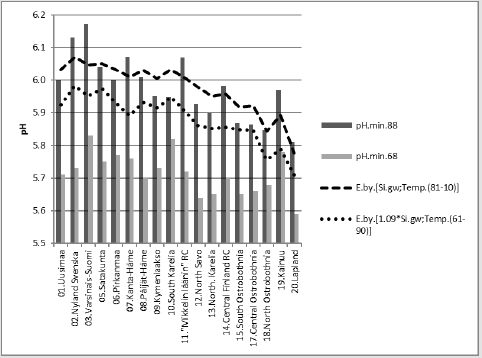 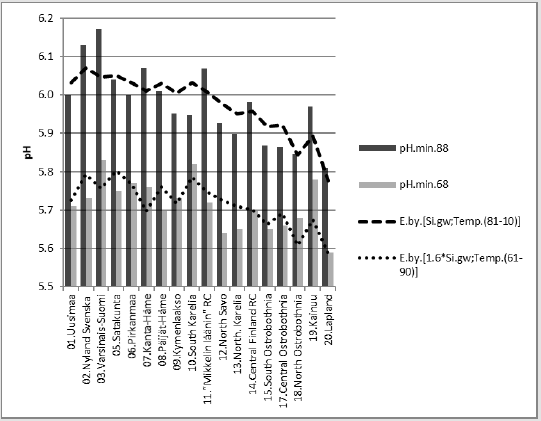 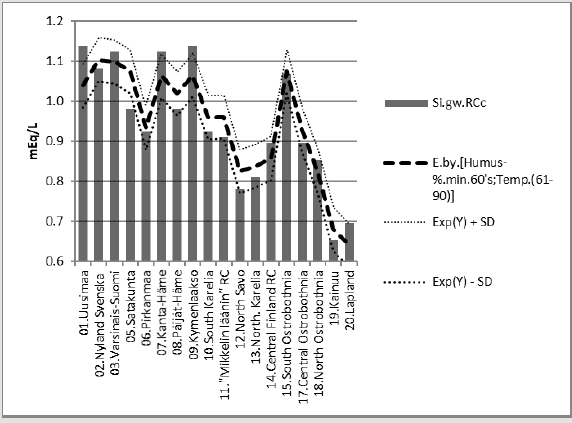 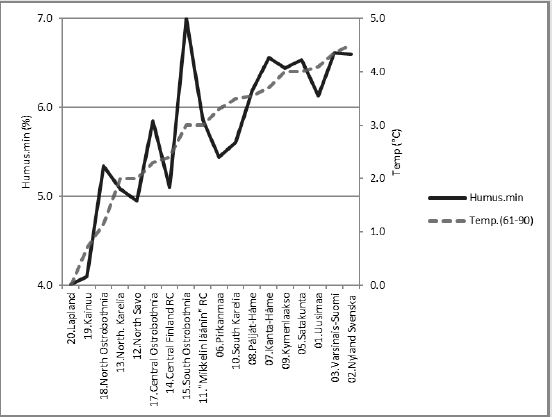 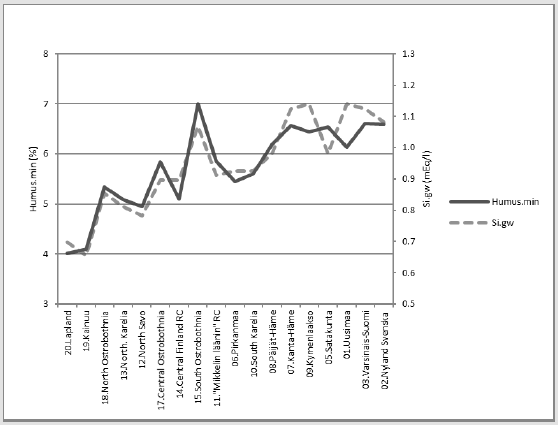 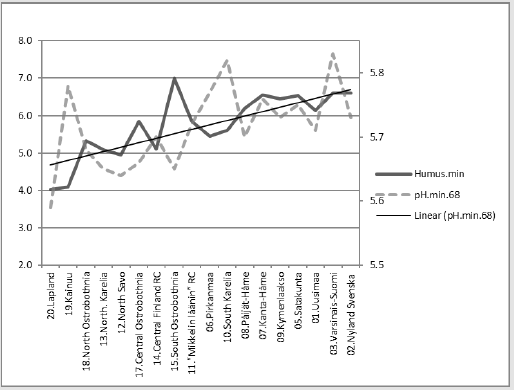 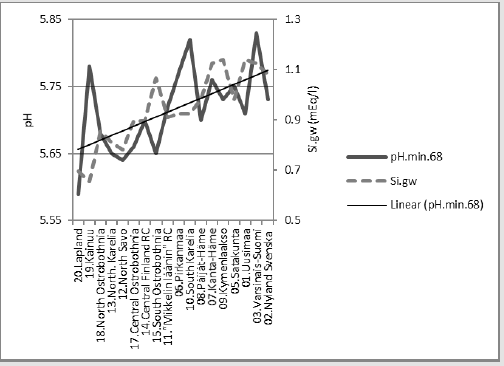 [Humus.min] (SOC) was significantly explained by factors associated with weathering (Table 1), (Figures 3-6). [Humus.min] was best explained by [Si.gw] (84 %). Changes in [pH.min] and [Temp] predicted 7.3 % reduction in [Humus.min] during 20 years.
[pH.min.68] was explained significantly positively by weathering factors [Temp], [Prp.(clays/fims).68] and [(Ca+Mg+K).min.68]. Prerequisites for antacid production [1], maintenance of pH, in non-carbonate soils are ‚Äì as generally in chemical reactions ‚Äì temperature and proper substrates: Silicates are the real natural liming agents ‚Äì with pH ad 9.5 [22]. [(Ca+Mg+K).min] and [Si. gw] are obviously mainly signs of preceding chemical reaction. Anyhow some oligomers of Si.gw, [= H4SiO4, Si(OH)4], with pK 6.8 [23,24] can work as buffers and liming agents in Finnish cropland soils where pH was and is below 6.8 [13,14,25]. Figures 9-12 represent combined pH regressions by [Humus.min], [Temp] and/or [Si.gw]. Figures represent experiments for predicting pH-value for two different decades by the same equation.
Agricultural soil gets acids not only via atmospheric CO2: plant roots [26] and many micro-organisms excrete acids [27], which can promote silicate weathering and carbon capture. Humus contains even humic acids [28], with can have buffer abilities [29]. Possibly silicon/silicon compounds work as matrix for formation of humic acids [30]. By maintenance of soil humidity [6] the soluble silicates can protect soil against erosion. (Obviously too effective ditching could promote erosion and via humus loss elevate pH (Figure 9)).
Significant association of [Prp.(fims/min).68] with [Humus. min] (Figure 2) is in concordance with Heikkinen et al. [5] who found that clay soils resisted best carbon loss or even could increase carbon binding independently on soil management [5]. Relative periodical stability in inter-regional pH values (Figure 11) is not fully explained. The data above suggests that it could be dependent on different regional speed of weathering: high values in weathering factors (low values in Lat) suggest on moderately fast weathering of solid silicates, associated with [Si.gw] and [(Ca+Mg+K)] formation. If the relative difference in weathering factors remains for decades the same, so the relative difference is expected to be the same in humus content and Si.gw. Anyhow, as old farmers said: the soil can get ‚Äútired‚Äù, which suggests that methods in represented in [3] are obviously worth trying. Inter-periodical difference in [Humus.min] was explained 7 % by changes in temperature and pH (Figure 5). Other predictions (Figures 6 & 9-12) are made by suppositions. Prediction of pH seems to need additional factors as: changes in soil liming and changes in structural and biological humus characteristics, possibly changes in acid rain, although it is not supported by the approximated linear reduction [5]. Inter-dependence and the general trend of [Temp], [Humus.min], [Si.gw] and [pH] are represented in (Figures 14-17), where RC‚Äôs are arranged in order by increasing [Temp]. Although locally humus content behaves oppositely to soil pH (and Si.gw), in micro-milieu of roots, where liberation of soluble SiO2 and carbon capture occurs, pH can obviously be above to the macroscopic level. The scanty examples suggest that predicting [pH.min.68] by [pH. min.88] and the average inter-periodical difference gives better estimates than via predicting [pH.min.88] by [pH.min.68], possibly depending on higher number of samples from ‚Äú88‚Äù and shorter time to 1999 (time point, when groundwater samples were collected). Possibly plant available Si was changed inter-periodically, too.

I am grateful to Professor Osmo H√§nninen and late veterinary surgeon Seppo Haaranen for several discussions.