5Department of Chemistry, University of Science and Technology Bannu 28000, Pakistan

Cellulose nanocrystals (CNCs) obtained from natural bio resources building blocks for the design of new biomaterials in nanotechnology [1]. Their widths varying from 5 to 20 nm and lengths from 100 nm to 1-2 μm [2]. Cellulose nanocrystals used for several years both in modified and unmodified form for the development and products which is useful for our society [3,4]. CNCs extracted from abundant cellulose nanofillers that is sustainable, biodegradable and has excellent strength-to-weight ratio used as reinforcing for epoxy composites [5]. Recently it has been shown that cellulose nanocrystals a sustainable bio sourced material, could serve as a valuable colloidal stabilizer [6,7]. It attracted a dynamic attention in developing lightweight and high performance nano composite due to their excellent mechanical performance, biodegradable and renewable abilities [8,9]. Cellulose nanocrystals materials are widely used due to their unusual properties, such as high specific surface area, static mechanical properties, fatigue resistance and permeability [10,11]. In several studies’ CNCs have been incorporated into polymer matrices as a reinforcing agent, due to hydrophilic characterization low or higher molecular weight molecules has been attempted to achieve good dispersion and adhesion in the non-polar matrices [12,13]. Cellulose nanocrystals is favorable reinforcing material for production of bio-based composite material because of its high strength and stiffness [14,15].

Also, cellulose nanocrystals are bio sourced safe nanomaterials of great research interest in both academic and industrial sectors. Their unique properties and future commercialization prospects have recently led potentially industrial production [16,17]. Nowadays epoxy resin are largely used in our daily life, like adhesives, adhesion between different matrix, excellent performance in mechanical properties [18,19]. It is used for making advanced types of composites such as coating in electric applications because of the versatility in curing, high excellent modulus, low shrinkage and high tunable [20,21]. Epoxy resin, most commonly thermosetting materials especially in the fiber manufacturing materials due to their excellent thermal and chemical resistance [22,23]. However, relatively high content of hydroxyl group after cured, epoxy resin perform high surface energy which compel their application in some areas such as anti-fouling coating [24]. Among organic coating, epoxy resin are used on large quantity in protective coating due to their excellent properties like ease of cure, high temperature performance [25,26]. Epoxy resin system is also used in high voltages transformers, power apparatus and cable terminations. Surface modification of fillers or crystals having coreshell structures in polymers can greatly enhance the performances such as electrical and thermal conductivity. Much efforts has been carried out to develop new insulating materials and related fabrication method for enhancing performance [27,28].

Cellulose nanocrystals (CNCs) were obtained from Science K Co. Ltd. Wzhangzhen China. There average length is 10-250 nm and average diameter with 7.5 nm. CNCs was firstly dried at 80°C for 8 h in vacuumed oven to remove the impurities and moisture. E-51 epoxy resin from sigma Aldrich. 3-Glycidoxypropyltrimethoxysilane (KH- 560) from Aladdin Industrial Corporation Shanghai’s. Analytical pure reagents including ethanol, acetic acid was obtained from the Aladdin reagent (Shanghai, China). All chemicals were used as received. Lab made distilled water were used.

Modification of Cellulose Nanocrystals With (KH-560)

Modified cellulose nanocrystal (MCNCs) was prepared in a single-necked 150 ml round bottom flask. Firstly taking 100 ml distilled water with 5 ml 3-Glycidoxypropyltrimethoxy silane (KH- 560) putting some drops of acetic acid to maintain the pH 4 stirring for one h. After that neat dried CNCs were immersed in a singlenecked round bottom flask and placed in sonication for 20-30 min, so that cellulose nanocrystals were fully disperse in the solution. Then stirred for the next 150 min at natural temperature. After that, the product was put into the centrifugation sample for washing two times by ethanol absolute (96% purity) and one time with distilled water. One round was 10 min at 5000 rpm in centrifugation (Shanghai Anting scientific instrument factory) to remove any excess of silane from the cellulose nanocrystals. After washing the product in the centrifugation put it into hot air oven for 4-5 h to remove the impurities, maintains the temperature at 100°C. The powder again put into the vacuumed oven with 80°C for the next 4-6 h to remove the remaining impurities and then subsequently preserved in sample glass bottle from moisture for further use.

A simulating industrial setup for steel plates was designed from Hangzhou iron and steel group Co. Ltd. The steel plates were polished and was dried at room temperature and subsequently preserved in plastic bags from moisture for further use. According to test methods for adhesive properties of MCNCs embedded with coated steel plates was polish molded into 3 standard testing. E-51 (DGEBA) epoxy resin 1 g and MCNCs with 1%, 3% and 5% was taken in the sample glass bottle and sonication at natural temperature for 1 h and then stirred at room temperature for the next 2 h. After that, 0.2 g of triethylenetetramine (TETA) added drop by drop and slowly stirred for the next 10-15 min for complete curing. Then place it in vacuumed oven for 15-20 min maintain the temperature up-to 45°C to remove the air bubbles from the solution, after that the complete mixture was poured by glass rod on steel plates with the length of 1.5 cm and width 2.3 cm into three different molds for curing. Curing process was carried out in an oven at 120°C for 1 h. After that, the samples were cooled down naturally to room temperature. These standard testing steel plates were placed at room temperature for 3-4 days before testing.

The structure of E-51 epoxy resin, both silane coupling agent (KH-560) were analyzed by the Fourier transform infrared spectroscopy (FT-IR). The infrared spectra recorded on a Nicolet-5700 FT-IR spectrophotometer by the KBr-pellet method and scanned from 4000-500 cm-1 with a resolution superior to 0.5 cm-1. The SEM images were obtained on scanning electron microscope (SEM, SU-3500) with X-ray spectrometer, coating of gold surface on the specimen were applied. The morphologies of the fracture surface images of silane coupling agent (KH-560) sized were obtained on this SEM. For adhesive properties, universal material testing machine (Zwick/roell Z020) were used for such properties like tensile strength, modulus and impact strength were analyzed.

The different functional groups present in neat cellulose nanocrystals (NCNCs) and MCNCs were studied by FTIR. The typical FTIR spectra of NCNCs and MCNCs is shown in Figure 1. Neat CNCs showed a strong peak appeared at 1750 cm-1 was ascribed to the C=C group stretching vibration of the ester and carboxylic group present in MCNCs [32,33]. The appearance of this peak confirmed the successful synthesis of the MCNCs. 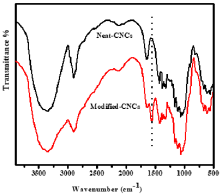 The Scanning electron microscope (SEM) images were obtained on field emission scanning electron microscope (SU- 3500) for neat cellulose nanocrystals. After sputter coating of gold on the specimen’s surface. The morphologies of the surface images of neat cellulose nanocrystals were obtained and clearly showing the surfaces of cellulose nanocrystals. The morphologies of the surface of neat and modified cellulose nanocrystals images were obtained and clearly showed the surfaces morphologies, reacted with aforementioned epoxies. The neat CNCs surface is much rougher than the modified CNCs. In general, their combination has a favorable effect on the performance of composites, which results an increase in the adhesive properties as shown in Figure 2 [34]. SEM of cellulose nanocrystals matrix appeared with epoxy resin, but their diameter decreased after spreading to varying degrees in the epoxy. However, as additional CNCs aggregation occurred, which prevented the formation of a homogeneous mixture. In general, their combination has a favorable effect on the performance of composites. However, better dispersion was obtained using a modified epoxy resin with low CNCs content. Low concentrations of CNCs are more appropriate than higher and aggregation resulted with increasing concentrations. The presence of multiple break lines in the epoxy surface indicates the hardness of the material. The modified epoxy resin particles exhibited bumps and collapsed morphology.

Here, we have also evaluated the adhesives strength of neat and modified CNCs, because they have an assured tensile modulus, strength and elongation at break. The average adhesive strength is mentioned in Figure-03. (A-B), using KH-560 silane coupling agent with the CNCs content, while triethylenetetramine (TETA) used as a curing agent. The epoxy resins containing neat and modified CNCs at 1, 3 and 5 weight percent (wt%) to evaluate the effect of enhancement potential. With the introduction of tensile modulus and strength at maximum load using steel plates. Modified CNCs has an obvious enhancement effect with 1 wt% and 3 wt% and 5 wt% on tensile modulus, but for tensile strength after adding 3% started agglomeration in the epoxy medium [35,36]. The maximum value observed for nanocomposites reinforced with all the samples [37]. The tensile data shows that all the modified CNCs samples had a higher tensile strength than the standard one. The results of modified CNCs binding themselves through -OH, creating a high strength linkage, with potentially interaction among them, increasing the adhesive properties. The increasing of modified CNCs loading result in agglomeration between particles, which produce weakness in the material, explaining the comparative decrease in adhesive with individual loading. 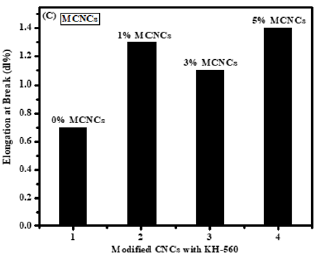 Surface morphology of cellulose nanocrystals obtained from industrial cotton have observed large mesh formations in transmission electron microscopy. The excess amount of CNCs presented aggregation behavior having highly rough surface, however, good dispersion observed in low concentrations of CNCs in DGEBA epoxy resins. The corresponding coupling agent bears a long chain structure of benzene ring in molecular structure, granting compatibility to CNCs with epoxy, contributing to the dispersion state in the matrix. In addition, higher loading of modified CNCs have increased the surface roughness, irrespective of the surface modification method. The surface modification has been confirmed through different techniques. Modified CNCs have obvious enhancement effect with 1 wt% and 3 wt% on tensile strength, but addition of 5 wt% caused agglomeration in the epoxy medium. The effects of KH-560 on the adhesive and mechanical properties with epoxy systems indicated effectively, improve the toughness of the epoxy system.

We have no conflict of interest.

This research was funded by the State Key Laboratory of Chemical Engineering, Zhejiang University 310027 Hangzhou, China

Sources of Financial Funding and Support

This research work is not funded by any agency.

5Department of Chemistry, University of Science and Technology Bannu 28000, Pakistan