Isatin is an indole derivative firstly synthesized in the laboratory by Erdmann and Laurent by oxidation of indigo pigment having chromic acid. It is orange-red in color with freezing point 2000C [1,2]. Isatin is heterocyclic compound and acts as important species for the synthesis of various heterocyclic compounds especially, indolic and quinolinic compounds. It is also used in medicines synthesis (Figure 1). Thiosemicarbazide derivatives of isatin were reported as an anti-HIV agent [3]. N-methyl isatin- β-4’,4’-diethylthiosemicarbazone prove high inhibition of HIV by their action on contrary transcriptase and viral structural proteins [4]. 3-p-(p-(alkoxycarbonyl) phenyl) carbamoyl) phenyl) imino-1-aminomethyl-2-indolinones was by R.S Verma et al. was successfully tested against M. tuberculosis H37Rv [5]. Isatin derivatives are very effective against micro-organism especially, S aureus, S epidermis, Micrococcus luteus, and B cereus. The Schiff base of isatin derivatives 5-substituted and N-acetyl isatin with different substituted aromatic aldehydes was assumed to be very operative against micro-organisms [6,7]. Bis-Schiff bases of isatin were found to possess significant anti-viral, antibacterial and antifungal activity [8,9]. 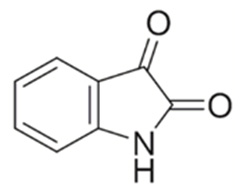 The azetidine and thiadiazine derivatives of isatin were also found to possess significant antibacterial activity [10]. 5-Nitro- 1H-indole-2,3dione-3-N-(4H-methyl phenyl)thiosemicarbazones screened for antibacterial activity against E.coli and S.aureus by the cup-plate method and found active [11]. It also acts as anti-HIV, showing enzyme inhibition activity and as cytotoxic agent against tumor cells [12-14]. In antismall pox [15], inflammatory activities [16], kinase activator [17]. Also, biologically active on echinococcus multilocularis metacestodes [18]. Meshram et al. also developed an isatin-based multicomponent reaction for the synthesis of spirooxindole fused N-heterocyles with anticancer properties [19]. Zhang et al. first reported the vinylogous, henry reaction between isatin and 3,5-dialkyl-4-nitroisoxazole, leading to isoxazolesubstituted 3-hydroxy-2-oxindole derivatives, medicinally important compounds [20], also provided the basis for removal of industrial dye wastewater [21]. In this study, we discuss with detail “Synthesis of isatin and its derivatives and their applications in biological system” because isatin play a key effects like ascorbic acid, hydroxyl amino acids, omeprazole, thiol compounds and imidazole etc. which is helpful for the pathogenesis of gastric ulcer and peptic ulcer.

Also discuss antioxidants, which are responsible for converting free radicals into stable substances, especially serious diseases caused by diabetes. We can say, that isatin provides a critical and dynamic role in the pharmaceutical industry.

One of the most famous techniques for the synthesis of isatin is Sandmeyer method. Aniline reacts with chloral hydrate and hydroxylamine hydrochloride conducting aqueous solution of sodium sulfate to produce an isonitrosoacetenilide. In this way, isonitosoacetenilide in the presence of sulphuric acid easily converted into isatin analogs [22] (Figure 2).

This method is very effective for the synthesis of isatin and its derivatives. The substituted isatin is synthesized by converting substituted aniline in the presence of oxalyl chloride and Lewis acids like BF3 or AlCl3. This method is also very useful to synthesize 1-Maryland polycyclic istan from phenothiazine, phenoxazine, dibenzoazepine and indol [23,24] (Figure 3).

Gassman introduced a new approach, to synthesize isatin. This method involves the characteristics relationship between electrons donating, an electron withdrawing group, to convert aniline to intermediate 3-methylthyiooxidinol. In this intermediate, the methyl group is oxidized by N-chlorosucinamide, which is proceeded by the hydrolysis of the chlorinated intermediate [25,26] (Figure 4).

Figure 4: Gassman synthetic scheme for the synthesis of Isatin. 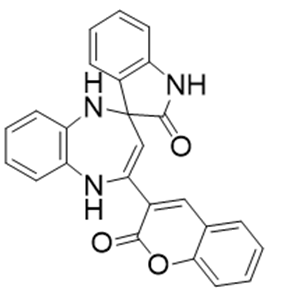 Most of this type, derivatives are synthesized in laboratories, such as 5-methyl isatin [41], and 5-aminoindazole and mercaptoacetic acid can easily prepared [42]. By treating alkyl isatin with the compound labeled acidic medium (acetic acid) reflux at 2 hours is converted into 2-aminobenzoic acid (2-oxo-1,2 dihydro-indole- 3-ylidene)-hydrazide [43]. Synthesizes, compound involves so many synthetic routes. Then these compounds were dissolved in acidic (acetic acid) in water basic solution [44-48]. The synthesis of Schiff base isatin which is synthesized reacting substituted isatin compounds for a time period of 8-12 h in the presence of ethanol and glacial acetic acid [49]. Such synthesize compounds is also comprised of chain reactions. Obtaining, the said compound, substituted isatin was treated with 8-hydroxy indol compound by oxidation and reduction in the presence of acid (H2SO4) and base (C2H5OH) [50]. Schiff base of isatin was prepared by the reaction of N-methyl isatin with p-nitro-(chloro-, fluoro-, methoxy-, carboxy-,) aniline [51]. Mono and di-substituted xylenes have been prepared by the reaction of the potassium salt of 5-bromoisatin with dihalo derivatives of p-,m- and o-xylene in the presence of DMF and K2CO3 [52].

Aniline as starting material by treating with chloral hydrate through condensation could be converted into imesatin in the presence of H2SO4, HCl, and NH2OH. The isatin derivative could be prepared by reacting different aromatic aldehydes with imesatin in the presence of acetic acid and ethanol [53]. Isatin could be synthesized by treating, isatin 2 with 3- substituted -4-amino-5- mercapto-1, 2, 4-triazole on reflux in the presence of ethanol and addition of HCl. Pure product was obtained by recrystallization from methanol [54,55]. Similarly, Schiff base of isatin could also be synthesized by refluxing (indol 2,3-dione) with (3-amino-5-phenylpyrazole) in acid-base media of ethanol and acetic acid [56]. The synthesis of the said compound is comprised of so many intermediate reactions. For this types of synthesis, first synthesized compound immediate hydrochloride, ester ethoxycarbonylhydrazone, and 4-amino-4,5-dihydro-1H-1,2,4-triazoles. After this, compounds were condensed with isatin in the existence of acetic acid, which is directly followed by the reaction of cyclopamine and formaldehyde [57]. The synthesis of Schiff bases, are prepared simply by reacting and refluxing aromatic di-amines with compound 2,4-diethoxy aniline in the presence of acid-base media [58]. Similarly, by refluxing benzyl isatin, aromatic diamines of acid-base media of ethanol and acetic acid with 5-Fluro isatin, the Bis-Schiff bases of isatin and its derivatives were also synthesized [59].

Urea, which is well-known fertilizer used for the enhancement of fertility of the soil, urea contains (46%) nitrogen. This urea release nitrogen in the form of ammonia gas due to which its action of fertility is also affected [60]. Urease is a well-known enzyme has nickel in their body structure which convert urea to carbon dioxide and ammonia by hydrolytic catalysis [61]. This typical enzyme is isolated by the same catalysis process from different plants, algae, fungi and bacteria [62,63]. As this enzyme has the same amino acid sequence and having Ni+2 in their core structure that is why its origin is very common [62,64,65], and develop various types of diseases in animals and plants especially stomach and gastrointestinal ulcer, hepatic coma urolithiasis and pyelonephritis [66,67]. Recently two new isatin derivatives (1-allyl-2-oxoindolin- 3-ylidene)-4-methylbenezenesulfono-hydrazide and (1-allyl-2- oxoindolin-3-ylidene)-4-chlorobenzenesulfono-hydrazide were synthesized with a high yields. The dynamic stability, reactivity, and affinity of these two derivatives are described. Enzyme inhibition potential test was carried out on urea enzyme of bacillus pasteurii urease and both compounds retarded the enzymatic activity with IC50 values of 39.46 ± 0.12 mM and 148.35 ± 0.16 mM respectively [68] (Figure 6). 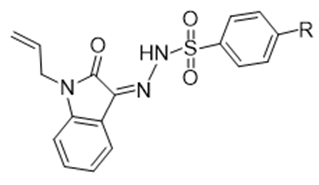 Helicobacter pyroli is the well-known bacterium which causes gastric and peptic ulcer [69]. This bacterium discharge urease which converts urea to ammonia which is basic in nature which increases the pH of the stomach and provides a good environment for their growth. This enzyme is very useful to eradicate the toxic organism from our body [70]. Recently, numerous urease enzymes have been added to literature especially triazoles and coumarin derivatives [71], Schiff bases derivatives [72], omeprazole [73], plan tool and its thiourea derivatives [74], hydroxamic acid [75], lansoprazole [76], thiol-compound [77], phosphorodiamidates [78,79], imidazoles, for example, rabeprazole [80], hydroxyurea [81], quinine [82] and hydroxamic acid derivatives [83].

α-glucosidase is also regarded as exoglycosidase enzyme. This enzyme is present in the intestinal tract which hydrolyzed the carbohydrate and converted into glucose. This glucose is then entering the bloodstream and its excess causes postprandial hypoglycemia [84]. The main aim of the α-glucosidase inhibitors is to delay the hydrolysis of carbohydrate to reduce the risks of diabetes [85], that’s why this enzyme is preferably used in anti-diabetic medicines [86]. α-Glucosidase inhibitors retard the function of α-glusidase, which is responsible, to convert carbohydrate into glucose. So, in this, way it, reduces the glucose level in the blood stream and hemoglobin [87]. The main drawback of this enzyme is lack of specify in targeting glycosidase and causes infections especially relating to the stomach and intestines, looseness of the bowel and produce a state of excessive gas in the alimentary canal [88]. The derivatives of benzothiazole-triazole were synthesized, and their characterization was carried out with 1H-NMR and 13C-NMR. The inhibitory activity of α-glucosidase inhibitory in vitro was screened by baker’s yeast α-glucosidase enzyme. Compared to standard IC50 817.38 μm values between 20.7 and 61.1 μm, most compounds exhibit varying degrees of alpha-glucose inhibition activity (Figure 7).

Free radicals are atom or molecule with an odd electron in their outmost shell [89], are highly unstable and always in search to gain an electron from any species to complete its outermost shell in order to make itself stable. In our body, during the metabolism process of oxygen, any free radicals are generated in mitochondria. So, it is very important to eradicate these free radicals, if it is not so, they will cause different diseases especially malignant neoplastic disease, disease relating to the brain and the blood vessels, dotage, heart disease, ulceration, diabetes, heart disease, mucoviscidosis, agedness, gastrointestinal ulcer and acquired immune deficiency syndrome [90,91]. So, to overcome this problem antioxidants are used, because their main function is to convert these highly unstable free radicals to stable substances. Antioxidants are used in a large number of medicines which are used to cure the diseases caused by the free radicles [92-94]. Here also experimental and theoretical results, compatible with (H25MI3ClPT) and (H25MI3PT) concentration of free radical scavenging in DPPH. The proportionality increased in the antioxidant activity. In particular, it is theoretically confirmed that the antioxidant activity of DPPH products with high energy volume (H25MI3ClPT) –IC50 is lower than (H25MI3PT)-DPPH products [95].

Conflict of Interest: The authors declare that they have no conflict of interest.

Ethical Approval: This article does not contain any studies with human participants or animals performed by any of the authors.