Contrast Transcranial Doppler in Detection of Platypnea-Orthodeoxia Syndrome: A Key Clue for a Tricky Diagnosis

Background: The platypnea-orthodeoxia syndrome is an underestimated syndrome that should be considered in the differential diagnosis of dyspnea when this worsens in the upright position. A diagnostic workup has been proposed, but it can be expensive and inapplicable in some patients.

Case Summary: In this report, we describe a case of platypnea-orthodeoxia syndrome in which transcranial Doppler study was the key-test for the diagnosis.

Discussion: Transcranial Doppler study can be a useful and effective tool for the clinicians to demonstrate the presence of a right-to-left shunt related to a patent foramen ovale and support clinical decisions in patients with a platypnea-orthodeoxia syndrome. This is a complex clinical entity, in which several pathophysiological mechanisms may be involved, so that a careful comprehensive evaluation of the patients is mandatory for a correct management.

The platypnea-orthodeoxia syndrome (POS) is a rare clinical entity characterized by the development of dyspnea in the assumption of the upright position (platypnea), associated with arterial desaturation (orthodeoxia), defined as a drop in PaO2 >4 mmHg or peripheral oxygen saturation (SpO2) >5%, both resolved with recumbency [1]. The diagnosis of POS can be complex and is often missed; accordingly, a high grade of suspicion and appropriate investigation are required to achieve the correct diagnosis. In addition, the diagnostic tools at present recommended for the identification of the syndrome may be expensive and/or inapplicable in several patients. Herein we report a case of POS in which contrast transcranial Doppler (cTCD) ultrasonography allowed to achieve the correct diagnosis and management.

A 24-year old woman was admitted to our emergency room complaining of worsening dyspnea (New York Heart Association class III). Her past medical history was significant for an acute lymphatic leukemia when she was 1-year old, treated with chemotherapy, radiotherapy (involving the chest and head) and bone marrow transplant when she was 2-year old. She was regularly taking thyroid hormones (levothyroxine) and an oestrogen-progestin pill because of panhypopituitarism. On physical examination, her blood pressure was 110/70 mmHg, heart rate 98 beats per minute and SpO2 96% with a respiratory rate of 20 breaths per minute. Chest and cardiac auscultation revealed a diffuse reduction of vesicular murmur and a fixed split of the second heart tone, respectively. An electrocardiogram showed sinus tachycardia with T-wave inversion in the precordial leads and chest X-ray showed a widespread thickening of the bronchial walls, an enlarged cardiac image and kyphoscoliosis. A careful assessment of symptoms revealed that the patient’s dyspnea was accentuated by the assumption of the upright position.
The patient, therefore, underwent multiple sequential arterial blood gas analyses that revealed a marked oxygen desaturation, associated with dyspnea, and sometimes with cyanosis, by passing from a supine to an orthostatic position. Symptoms rapidly disappeared and oxygen saturation normalized with recumbency. Of note, orthostatic oxygen desaturation was not improved by O2 administration. Based on these findings, POS was suspected. A transthoracic echocardiography showed an increased systolic pulmonary artery pressure (sPAP) (50 mmHg) with signs of right ventricle pressure overload and a negligible left-to-right atrial shunt compatible with the presence of a patent foramen ovale (PFO). A contrast computed tomography (CT) of the chest showed an interstitial lung disease (ILD) with signs of bronchial stenosis (likely related to the previous radiation therapy); in addition, multiple intraluminal filling defects compatible with pulmonary embolism associated with an increase of the caliber of the pulmonary artery were detected. Chest CT, furthermore, confirmed the presence of a severe kyphoscoliosis.
To confirm the diagnosis of POS both a bubble contrast echocardiogram (at baseline and after Valsalva maneuver) and a transesophageal echocardiogram were performed, but both failed to clearly document a right to left atrial shunt. A transthoracic echocardiogram in the upright position was also performed, but the echocardiographic windows were inadequate to obtain valuable images. Thus, a cTCD with the administration of activated saline was performed and the left middle cerebral artery (LMCA) was monitored through the temporal bone window. In supine position, no passage of echo-contrast was observed in the LMCA (Figure 1A). In the upright position, however, a high number of hits appeared in the LMCA, consistent with the occurrence of a paradoxical large shunt at the level of the PFO (Figure 1B). Finally, a right heart catheterization was performed, which confirmed the presence of pre-capillary pulmonary hypertension with a negative response to vasoreactivity testing.

A) Supine position: no passage of echo-contrast was observed in the LMCA.
B) Upright position: a significant number of hits in the LMCA, consistent for a paradoxical shunt at the level of a large PFO.

After a careful and comprehensive evaluation, pulmonary embolism and consequent pulmonary hypertension were addressed as the main mechanisms allowing the syndrome to become manifest and percutaneous closure of PFO was not considered beneficial due to the possible worsening of pulmonary hypertension. The patient was then discharged with oral anticoagulation (warfarin) and supportive measures (oxygen therapy and furosemide). A 3-month follow-up showed a complete resolution of symptoms, associated with a marked reduction in sPAP (30 mmHg); a chest CT confirmed the diagnosis of chronic thromboembolic pulmonary hypertension (CTEPH), showing specific radiologic signs (ring-like stenoses, chronic total occlusions) but not evidence of acute pulmonary embolism. cTCD was unable to demonstrate any right-to-left shunt in the upright position even after Valsalva maneuver.

The mechanism of hypoxia in POS is usually the result of a mixing in the left atrium of deoxygenated venous blood coming from the systemic circulation with the oxygenated blood coming from the pulmonary circulation because of a right-to-left atrial shunt, related to the presence of a PFO. Typically, however, the shunt occurs only when the patient assumes an upright position [2], thus indicating that some functional abnormality favoring a pressure gradient between the right and left atrium is required, in presence of the anatomical defect, for the syndrome becomes manifest. Of note, in our patient multiple pathophysiological mechanisms concurred to cause the manifestation of the syndrome, with CTEPH having a major role in its development, as shown in Figure 2. In keeping with the complexity of the pathophysiologic mechanisms, the diagnosis of POS is often challenging and may actually be missed, so that the prevalence of the syndrome is probably underestimated. According to the most recently suggested diagnostic workup, the first step for the diagnosis is the assessment of oxygen blood saturation both in the lying and standing position, followed by a bubble contrast transthoracic echocardiogram that may identify an intracardiac shunt [3]. If transthoracic echocardiogram is inconclusive, a transesophageal echocardiogram should be performed to look for the presence of an intracardiac defect [4]. 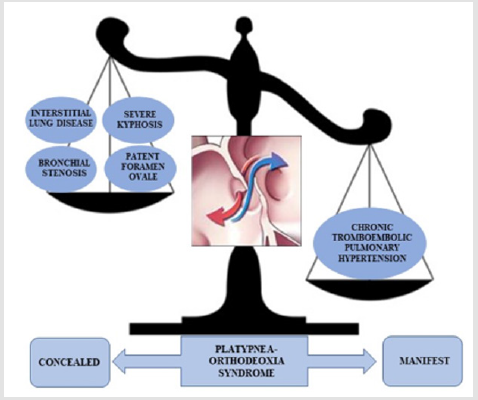 Figure 2: Many mechanisms were concurring to the development of POS in our patient, with CTEPH having a greater weight in causing right to left shunt through patent foramen ovale.

The diagnostic assessment can be completed with a cardiac magnetic resonance and computed tomography angiography, a V/Q scan for extra-pulmonary shunt [5], or invasive pulmonary arteriography when intra-pulmonary shunts are to be conformed or excluded [6]. In our case, a crucial test to achieve correct diagnosis of POS was cTCD, which only allowed the documentation of a clear and sizeable right to left shunt when the patient went from the supine to the standing position, in association with a relevant blood oxygen desaturation. Accordingly, we suggest that cTCD should be included in the diagnostic work-up of POS, even due to its simplicity, non-invasive character, low cost, and large availability, in particular when other tests are unreliable because of a not optimal ultrasound window or because not feasible for any reason [7,8]. Our case highlights how complex the syndrome can be and how it is important to identify the pathophysiologic mechanisms involved in its genesis for a correct management of the patients. Even if data in literature are poor, percutaneous closure of PFO when diagnosed is mostly recommended according to guidelines [9,10], but our case demonstrates that therapy should be tailored to the mechanisms responsible for the syndrome in individual patients. The key for the management of our patient, indeed, was the appropriate treatment of CTEPH, which allowed control of pulmonary hypertension and prevention of POS recurrence.

In conclusion, this case report underscores the importance of considering POS in patients with dyspnea and hypoxemia without an obvious etiology. In addition, it suggests that cTCD should be included in the diagnostic work-out of these patients, in particular in the most complex cases. Finally, it highlights how POS can be triggered by reversible causes, the identification and treatment of which may lead to complete regression of the syndrome, thus avoiding unhelpful and potentially risky invasive management of the patient.

The authors confirm that written consent for submission and publication of this case report including images and associated text has been obtained from the patient in line with COPE guidance.

Conflict of Interest and Funding

This research did not receive any specific grant from funding agencies in the public, commercial, or not-for-profit sectors.

Contrast Transcranial Doppler in Detection of Platypnea-Orthodeoxia Syndrome: A Key Clue for a Tricky Diagnosis

Background: The platypnea-orthodeoxia syndrome is an underestimated syndrome that should be considered in the differential diagnosis of dyspnea when this worsens in the upright position. A diagnostic workup has been proposed, but it can be expensive and inapplicable in some patients.

Case Summary: In this report, we describe a case of platypnea-orthodeoxia syndrome in which transcranial Doppler study was the key-test for the diagnosis.

Discussion: Transcranial Doppler study can be a useful and effective tool for the clinicians to demonstrate the presence of a right-to-left shunt related to a patent foramen ovale and support clinical decisions in patients with a platypnea-orthodeoxia syndrome. This is a complex clinical entity, in which several pathophysiological mechanisms may be involved, so that a careful comprehensive evaluation of the patients is mandatory for a correct management.