Polyethylene terephthalate fiber mats were prepared by solution electrospinning with average fiber diameters ranging from 150 nm to 500 nm depending on the processing conditions. The minimum amount of trifluoracetic acid was determined at which the electrospinning process generates randomly oriented and smooth surfaced fibers. A three factorial Box-Behnken experimental design was used to determine the effect of the processing parameters on the resulting fiber diameter. It was found that the dichloromethane: trifluoroacetic acid 80:20 (wt:wt) solvent system generates a robust electrospinning system, where only the applied voltage shows statistical significance.

Polyethylene terephthalate (PET) is a semi crystalline polymer, that is used in a variety of applications due to its resistant to environmental effects and good mechanical properties[1,2]. PET is used in the automotive and packaging industry extensively, however lately PET nanofiber mats were used for filtration[3], protective clothing[4], biomedical applications such as tissue engineering scaffolds[5], electroconductive cardiac patch[6] and others[7]. Electrospinning has become a readily used process to generate polymer fibers with average diameters in the nanometer range[8]. Polymer fiber mats generated by electrospinning offer a high surface-to-volume ratio and high porosity[7]. The solution electrospinning process has been discussed in detail in the literature. Briefly, a polymer solution is placed into a container, typically a syringe, that is connected to a needle. The needle is connected to the positive potential outlet of a high voltage DC power supply and the collector is grounded and placed at a desired distance from the needle. The so-called Taylor cone forms at the end of the needle and the solution becomes positively charged[9]. When the tension due to the repulsion forces of the positive charges exceed the surface tension of the solution a jet forms that travels to the collector. During the travel most of the solvent evaporates and a solid polymer fiber deposits on the collector[7,8].
To generate PET fiber mats trifluoroacetic acid (TFA) alone or its mixture with dichloromethane (DCM) is used[10-12]. TFA is a potent acid, pKa = 0.23, thus its use for generating PET fibers has its inherent dangers, and it corrodes the equipment[13,14]. The aim of this work is to determine the minimum amount of TFA needed to dissolve PET and to produce fibers by electrospinning.

10 wt% PET solution was used for electrospinning base on our findings in an earlier work[10]. The TFA:DCM solvent ratios were prepared as indicated. PET fibers were generated on a custombuilt electrospinning device. A plastic syringe contained the PET solution was connected to a needle (G22) through PTFE tubing. The needle was connected to the positive high potential outlet of the high voltage DC power supply (Gamma High Voltage Research, USA) whereas the collector was grounded. A syringe pump was used to supply the desired constant flow rate. The electrospinning process parameters were set as shown in (Table 1). 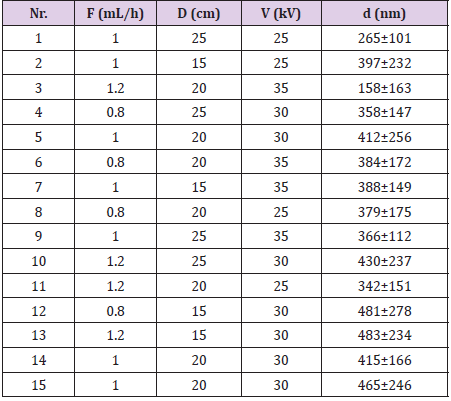 SEM imaging was performed on a JOEL JSM-5200 scanning electron microscope at 10 kV accelerating potential. The samples were examined as is, without sputter coating. ImageJ software was used to determine the fiber diameter, based on at least 60 measurements for each sample. The measurements were collected from three different x10000 SEM image for each sample.

The aim of this work was to minimize the use of TFA when preparing PET fibers via the electrospinning method. In order to do this several solvent ratios were prepared that are presented in (Table 2).The results show that PET can be dissolved when using only 3 wt% TFA, however preliminary electrospinning experiments indicated that at DCM:TFA 97:3 solvent ratio the fiber formation process did not start, thus PET fibers could not be obtained. At DCM:TFA 90:10 solvent ratio using D=10 cm collector-to-needle distance, F=1 mL/h flow rate and V=20 kV potential difference PET fibers formed. During the process white, visible PET fibers formed between the tip of the needle and the collector. This is an undesired phenomenon that is most probably due the high evaporation rate of DCM, since we did not observe this earlier, when only TFA was used as solvent[10]. Using DCM:TFA 80:20 solvent ratio to solubilize PET resulted a stable electrospinning process, and the above-mentioned premature fiber solidification did not occur. In order to investigate the flow rate (F), collector-to-needle distance (D) and the applied voltage (V) electrospinning process parameters on the resulting fiber diameter the Box-Behnken method was utilized.

The boundary limits were determined by scoutingexperiments to be 0.8 mL/h and 1.2 mL/h as the lower and upper limits respectively for the F, 15 cm and 25 cm for D, and 25 kV and 35 kV for V. (Table 2)shows the average fiber diameter (d) and the standard deviation corresponding to the applied processing parameters. The produced average fiber diameters vary between 150 nm and 500 nm. It has to be mentioned that the standard deviations are relatively large, indicating that the fiber diameters are not uniform. The electrospinning process was stable under all investigated conditions and resulted in randomly oriented, well defined, and smooth surfaced PET fibers as it is illustrated in (Figure 1). The SEM images show the presence of beads under all conditions. This could be due to the low viscosity of the solution. Further investigation to eliminate the bead formation by the increase of the solution concentration is needed.The evaluation of the Box-Behnken experimental design (R2 = 0.7418, R2(adj)= 0.2771) show statistical significance only in the case of the applied voltage under the examined boundary limits.

In conclusion, it can be said that the TFA amount need to produce PET fibers by solution electrospinning was minimized. The results show that at DCM:TFA 97:3 (wt:wt) solvent mixture PET dissolves, however in order to produce fibers DCM:TFA 80:20 (wt:wt) solvent ratio is needed. Randomly oriented and smoothsurfaced PET fibers were produced with average diameters ranging from 150 nm to 500 nm. The Box-Behnken experimental design analysis shows statistical significance only in the case of the applied voltage, meaning that the PET electrospinning process using DCM:TFA 80:20 solvent system is robust and only the applied voltage could influence the fiber diameters.

The author wishes to thank the financial support for the Transylvanian Museum Society.

Polyethylene terephthalate fiber mats were prepared by solution electrospinning with average fiber diameters ranging from 150 nm to 500 nm depending on the processing conditions. The minimum amount of trifluoracetic acid was determined at which the electrospinning process generates randomly oriented and smooth surfaced fibers. A three factorial Box-Behnken experimental design was used to determine the effect of the processing parameters on the resulting fiber diameter. It was found that the dichloromethane: trifluoroacetic acid 80:20 (wt:wt) solvent system generates a robust electrospinning system, where only the applied voltage shows statistical significance.