Conclusion: Association of cropland Mg/Ca ratio with HMg and HCa was similar but much weaker than expected by the soil-timothy studies in the 1970’s. As a background phenomenon soil Mg/Ca could affect slightly on Ca and Mg balance of animals and humans, negatively and positively. Comparing of HMg and HCa incidence especially in carbonate soils are suggested

Hypomagnesemia (HMg) of ruminats is a metabolic disease associated with absolute or relative dietary Mg-deficiency [1] and weather conditions [2] with rapid onset and remarkable lethality. The risk is increased when cows are grazing pasture, especially in Spring and Autumn when the absorption of magnesium is influenced by factors including: high levels of potassium, nitrogen and moisture content and low levels of sodium [1]. Weather conditions, e.g. cold weather associated with low sugar content of grass can be a decisive factor [2]. Parturient Hypocalcaemia (HCa) (in Finnish “poikimahalvaus”), with synonyms: Puerperal Tetany, Lactation Tetany, Milk fever, occurs usually within 72 hours after parturition, associated with the increased calcium demand and probably are the reflection of a temporary failure of calcium homeostatic mechanisms [3]. Cropland Mg/Ca has explained timothy Mg/Ca variation 71 % (p = 0.001) [4-6]. It has been highest in North Finland (North) and lowest in Åland [7]. This study assesses provincial HMg and HCa changes during 11 periods and their associations with [(Mg/Ca).soil] from 1986-1990. Since 1983 veterinary surgeons have reported grass tetany (“laidunhalvaus”) and other “hypomagnesemias” under label “hypomagnesemia”.

Cropland magnesium and calcium values by Rural Centers (RC), mg/l, are from [8] and represented in [7] (Total”). Provincial Mg and Ca values are attained by dividing and combinig RC values as represented in [9]. They are represented as mEq/L in Table 1. Map and label numbers of Finnish Provinces are from [10], but they are put to the same order as respective RC’s in [7,8]: (08 Kuopio, 07 North Karelia; last 03 Åland). In [7] Kuopio RC/province had high (Mg/Ca) ratio in 1966-70, but relatively lower in 1986-90 [9]. That’s why Kuopio province was discarded and Vaasa province, (which includes even the biggest part of RC16, Central Ostrobothnia) [9,10] was accepted to North (group) with Oulu and Lapland. Uusimaa and Häme with higher (Mg/Ca) ratio than Vaasa were discarded from the North because North has some climatic factors in common and correlations are calculated by provinces. Because of scanty data (of HMg) whole country (WhC), South (S) and North (N) values were calculated by dividing their total incident cases by their total number of cows (Σ/Σ).

Table 1: Provincial cropland Mg and Ca contents and their ratios in Finland during 1986-90. 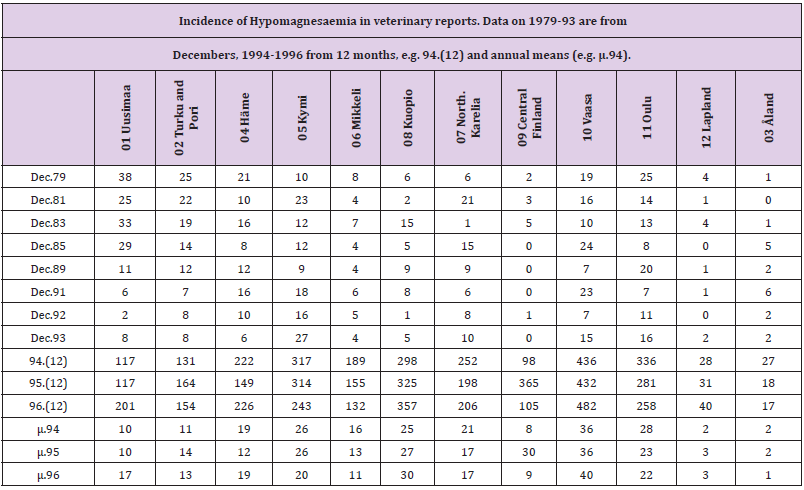 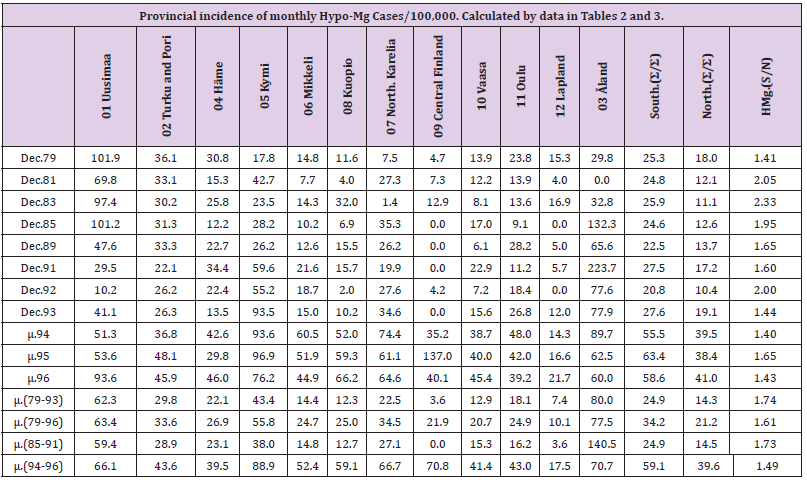 Table 5: Provincial incidence of monthly Hypo-Mg Cases/100,000. Calculated by data in Tables 2 and 3. 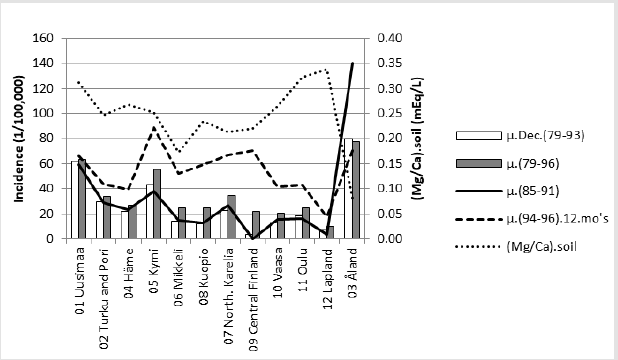 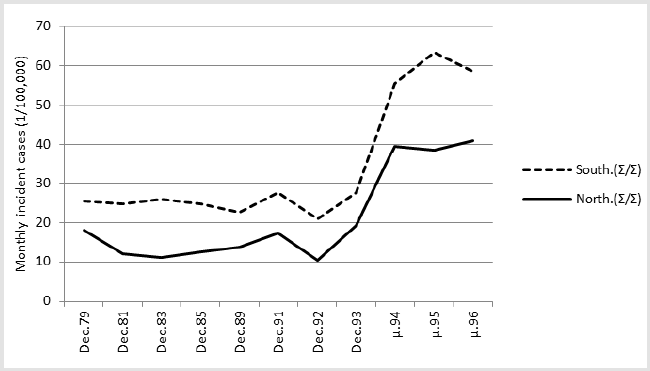 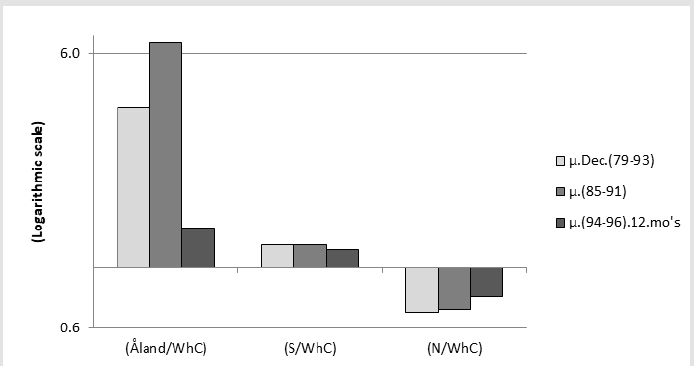 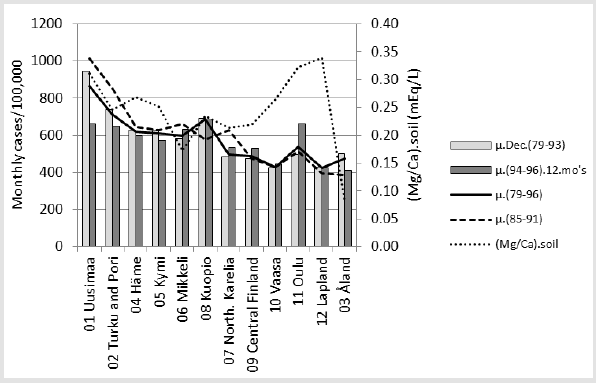 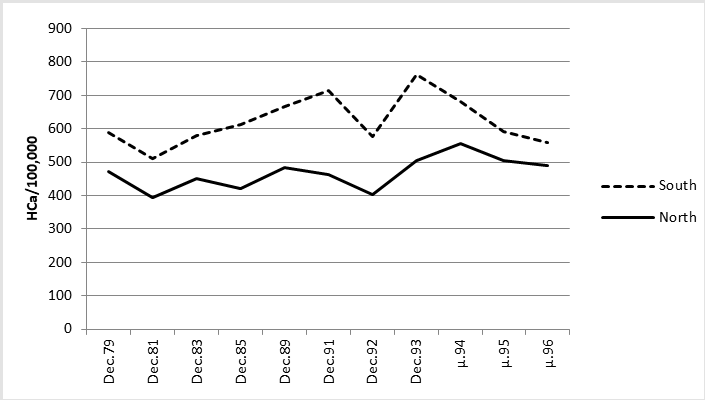 Figure 5: Incidence of HCa in South and North Finland. 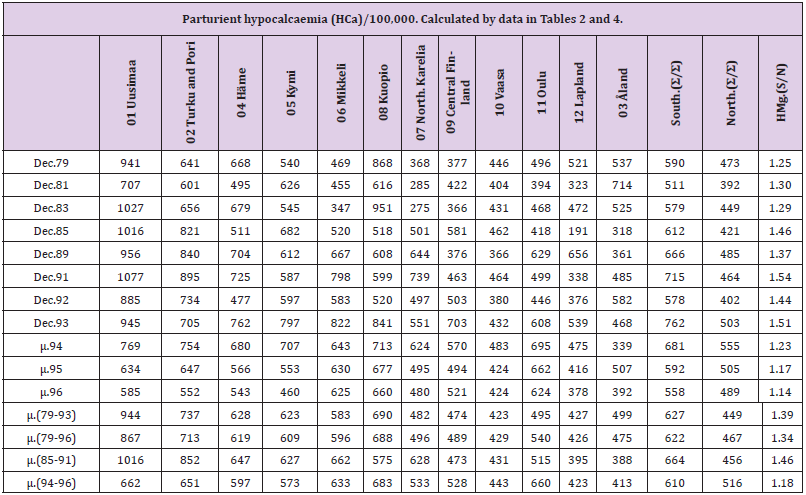 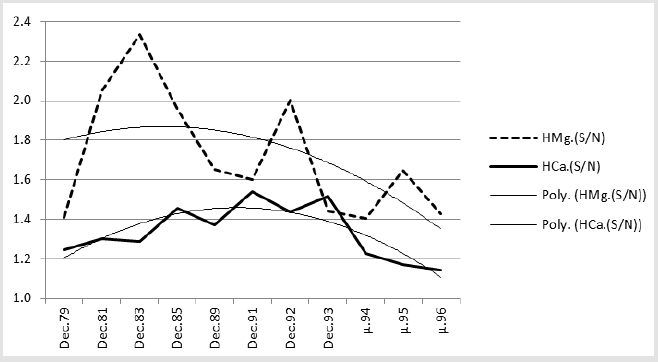 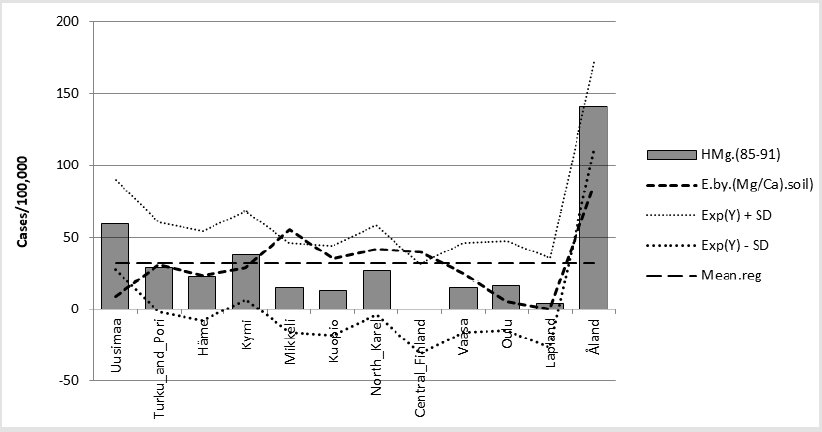 Figure 8: Hypomagnesemia incidence in 1985-91 and its regression by cropland Mg/Ca ratio- negative association. 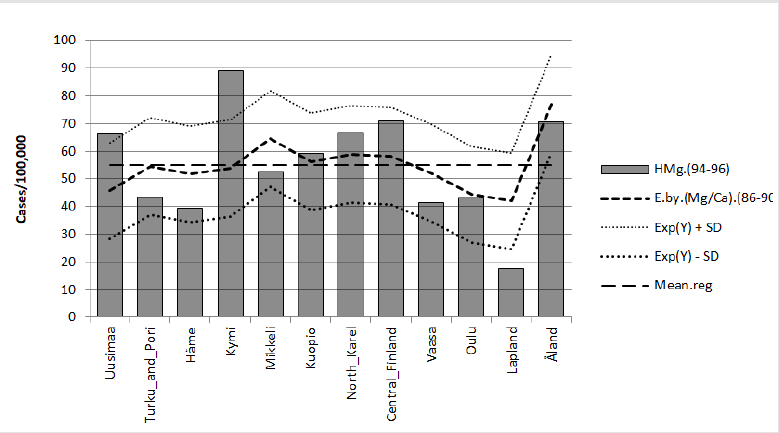 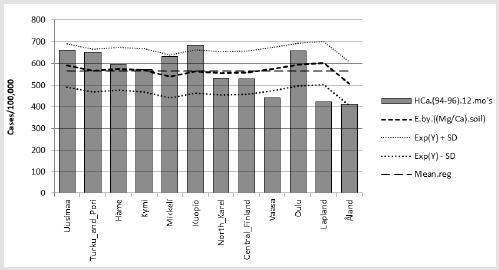 This study shows that HMg was associated trend-like negatively and HCa weakly positively with agricultural soil Mg/Ca ratio as suggested by [4-6]. Strongest HMg association (-0.62*) with [(Mg/ Ca).soil] was observed, when HMg cases were collected from about the same period. South and Nord was selected differently to [7] (Nord exluded Kuopio and included Vaasa), because of higher Mg/ Ca ratio in 1986-90 than in 1966-70. Soil (Mg/Ca) ratio in South was lower to North: S/N ratio was below 1 (0.82-0.83) even by weighting the soil values by the number of cows. Compliance between South and West values in HMg and HCa is obviously partially dependent on climatic factors. Assessing by South and North blocks can include additional bias although it could reduce statistical biases. Small number of variables (12) and small size of variables, as well as small number of provincial HMg cases in 1979- 93 could cause statistical bias. The moderately big changes in soil values during the scope of this study [7] could have affected on the results [7]. Veterinary surgeon Haaranen [16] did not see any HMg cases during 1953-66 in his district (in Kuopio province – “North”) although HMg was common in Finland before availability of Mg-rich fodder salts, since 1956 [17]. HMg risk was changed via NPK/Mg fertilization ratio [16], even associated with phosphor proportion in fodder [16]. HMg risk was obviously affected via (domestic or foreign) fodder import. Explanation for higher HMg risk in Kymi to Åland after 1992 (Table 5) is not explained here. Different roles of soil and groundwater factors are discussed in [7]. Outside of this study groundwater Mg/Ca ratio associated non-significantly negatively with HMg and positively with HCa. But water-factors seem to have difficulties in explaining their effects quantitatively.

Association of cropland Mg/Ca ratio with HMg and HCa was similar but much weaker than suggested by the soil timothy studies in the 1970’s. As a background phenomenon soil Mg/Ca could affect slightly on Ca and Mg balance of animals and humans, negatively and positively. Comparing of HMg and HCa incidence especially in carbonate soils are suggested.

Conclusion: Association of cropland Mg/Ca ratio with HMg and HCa was similar but much weaker than expected by the soil-timothy studies in the 1970’s. As a background phenomenon soil Mg/Ca could affect slightly on Ca and Mg balance of animals and humans, negatively and positively. Comparing of HMg and HCa incidence especially in carbonate soils are suggested