White Dot Syndrome in Patients with Prior Ocular Toxoplasmosis

Results: Two young healthy females with longstanding chorioretinal scars due to toxoplamosis presented with acute visual symptoms and clinical findings resembling MEWDS. Both patients also showed inactive scars in both eyes and had positive serological testing for toxoplasmosis. Unilateral deep gray-white retinal lesions corresponding to disruption of the outer retinal bands on OCT were scattered throughout the posterior pole and were more numerous around the chorioretinal scars.

Multiple evanescent white dot syndrome (MEWDS) was first described in 1984 by Jampol et al. [1] It is characterized by unilateral diminished vision and enlargement of the blind spot and has a predilection for young, healthy, myopic females. Retinal findings include macular granularity, multifocal, small white lesions concentrated in the paramacular, peripapillary, and midperipheral fundus, as well as posterior vitreous cells [2]. Recent studies have shown that MEWDS affects predominantly the outer retina, centered at the ellipsoid zone (EZ) and interdigitation zone (IZ), with some changes extending into the outer nuclear layer (ONL) [2]. The pathogenesis of MEWDS is unknown, although an immunemediated process in genetically predisposed individuals has been postulated. Toxoplasmosis is the leading cause of infectious posterior uveitis in the world, accounting for 80% of cases in some regions [3]. Although toxoplasmosis chorioretinitis usually has a self-limited course, it can lead to irreversible visual loss, particularly when the macula and op-tic nerve are involved. In 2011, Vance et al. reported a unilateral white dot syndrome occurring in a healthy 27-year-old woman 1 month after documented resolution of recurrent toxoplasmosis chorioretinitis involving the same eye [4]. Herein, we report 2 similar patients with retinal findings resembling MEWDS in eyes with evidence of prior ocular toxoplasmosis.

A 25-year-old healthy woman complained of floaters and photopsia in her right eye (OD) for 2 days. As a child, she was diagnosed with ocular toxoplasmosis in both eyes (OU) and had received treatment for several recurrences of active chorioretinitis OD. Visual acuity in her left eye (OS) had always been poor. On examination, best-corrected visual acuity (BCVA) was 20/30 OD and counting fingers at 3 meters OS. Anterior segment examination was normal OU with no cell or flare detected. Intraocular pressures were 14 mmHg OU. Ophthalmoscopy OD showed inactive peripheral chorioretinal scars and a small deep white lesion with ill-defined margins located superotemporal to the fovea (Figure 1). Ophthalmoscopy OS revealed inactive chorioretinal scars in the macula and peripheral retina (Figure 1). No vitreous cells were noted OU. Given concern regarding a possible recurrence of toxoplasmosis chorioretinitis OD, the patient was start-ed on a 6-week course of BID oral sulfamethoxazole/trimethoprim (800mg/160mg). Five days later, she returned complaining of worsening of vision OD. BCVA was 20/50 OD. 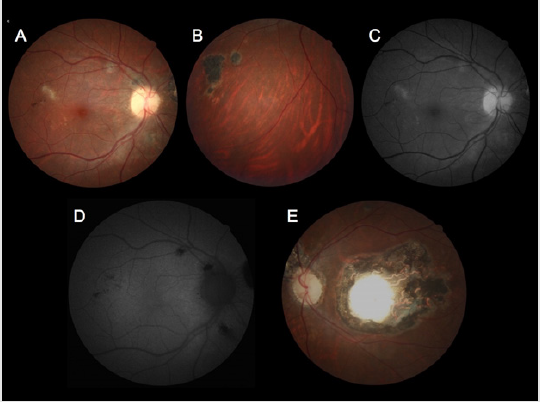 Anterior segment examination was unchanged. Ophthalmoscopy OD revealed 1+ vitreous cells, macular granularity and multiple scattered deep gray-white lesions OD. The le-sions were more numerous around the old chorioretinal scars (Figure 2). Ophthalmoscopy OS remained unchanged. Fundus autofluorescence (FAF) showed faint hyper-autofluorescence corresponding to the multiple gray-white lesions (Figure 2). Spectral domain optical coherence tomography (OCT) of the deep retinal lesions showed disruption of the EZ and IZ with no abnormalities detected anterior to the ONL. There were no changes involving the retinal pigment epithelium/ Bruch’s membrane complex, except at the fovea where there was a thin hyporeflective splitting of this hyperreflective band and a dome-shaped accumulation of subretinal hyperreflective material. The patient completed the 6-week course of sulfamethoxazole/ trimethoprim and also received a brief course of oral prednisone. Laboratory studies included normal leukocyte and erythrocyte counts, a normal erythrocyte sedimentation rate, and negative serologic testing for HIV and syphilis (VDRL and FTA-ABS). A chest x-ray was normal. 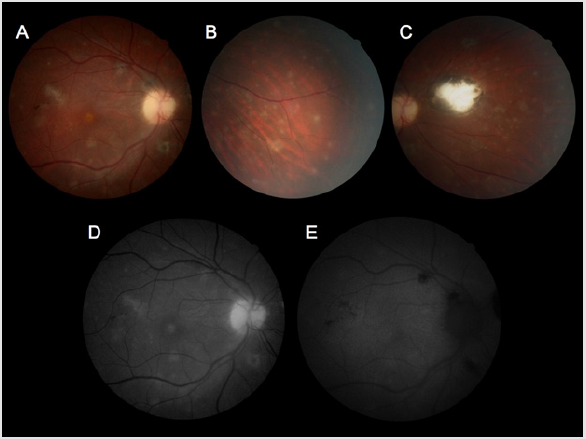 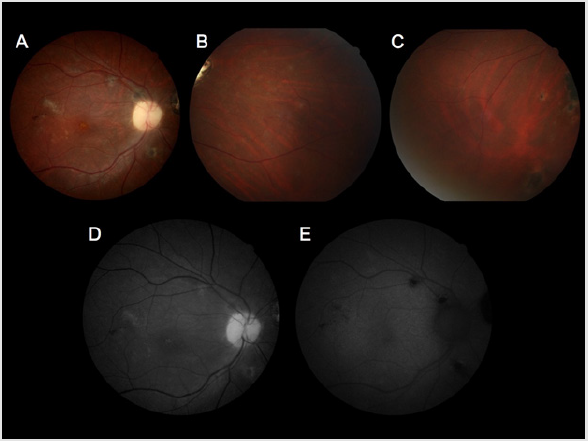 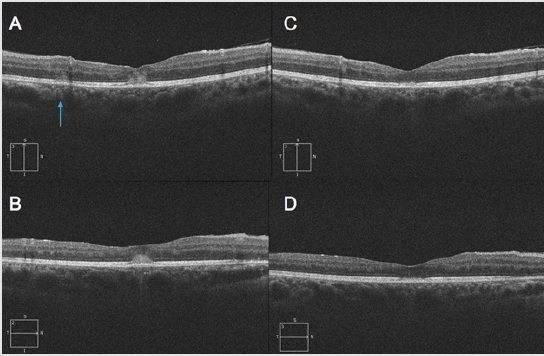 Figure 4: Case 1, spectral-domain optical coherence tomography (SD-OCT). A, B: 5th day follow-up SD-OCT shows disruption of the ellipsoid zone (EZ), interdigitation zone (IZ) and a dome-shaped accumulation of hyperreflective material at the fovea. Disruption of the EZ, extending to the IZ and outer nuclear layer (ONL) were seen at the sites of white dots (arrow). No abnormalities were detected anterior to the ONL. C, D: One month fol-low-up SD-OCT shows resolution of both the inferior lesion shown in A, as well as of the foveal dome-shaped hyperreflective material. There is some persistent attenuation of the subfoveal EZ and IZ. 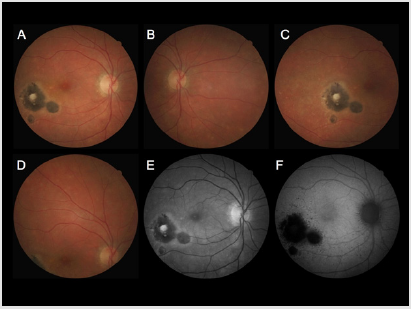 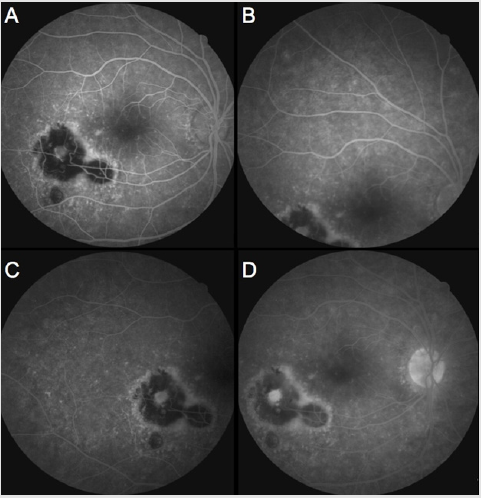 Figure 6: Case 2, right eye. Fluorescein angiography (A-D) shows multiple early hyperfluores-cent dots which become confluent around the chorioretinal scars and temporal para-macula. Some of the dots show a “wreath-like” pattern. There was late staining of the optic nerve head (D).

The cases herein reported presented with clinical findings resembling MEWDS including macular granularity, vitreous cells and multiple evanescent deep gray-white retinal lesions. Multimodal retinal imaging including FAF, OCT and fluorescein angiography showed changes similar to those seen with typical MEWDS [2]. Both patients had chorioretinal scars characteristic of prior toxoplasmosis chorioretinitis. The ocular history of the first patient, with poor vision in 1 eye since childhood and prior treatment for recurrent chorioretinitis, was suggestive of congenital toxoplasmosis. The history and imaging findings of our cases closely resemble a case reported by Vance et al. in which there was an initial concern regarding early reactivation of ocular toxoplasmosis [4]. Similar to this prior case, both of our patients were treated with oral anti-toxoplasma therapy. Our first patient was also treated with oral corticosteroids. A diagnosis of punctate outer toxoplasmosis (PORT) was considered, since multifocal graywhite lesions at the level of the deep retina and retinal pigment epithelium have been described with this entity.

However, the 2 cases herein reported presented with findings that were more widespread than the lesions described with PORT. Minimal retinal pigment epithelium involvement and the absence of persistent retinal pigment epithelium changes or new scars following resolution were also inconsistent with PORT. Furthermore, while the initial descriptions of PORT occurred prior to the availability of high-resolution OCT, a recent study has shown that both inner and outer retinal involvement occur, as well as punctate preretinal hyperreflective lesions [5], which were not present in our cases. We admit that treatment could have altered the course of our patients’ disease. Previous studies have shown that MEWDS can present after the primary occurrence or recurrence of choroidal neovascularization [6]. Whether choroidal neovascularization or ocular toxoplasmosis may trigger a white dot syndrome by creating a proinflammatory environment remains to be elucidated. Subclinical reactivation of ocular toxoplasmosis could also be involved. Other studies have reported MEWDS following vaccination [7] or systemic viral infection [8], thus an immune-mediated process in genetically predisposed individuals is strongly suggested.

It is possible that toxoplasmosis may trigger a white dot syndrome by means of a local immune-mediated process induced by the parasite. One interesting aspect of both cases was the predilection for the white dots to occur near the old chorioretinal scars. This pattern was particularly evident on FAF of Case n.2. In the acute phase of MEWDS, FAF demonstrates: (1) multiple, small (< 50 μm) auto-hypofluorescent areas in the posterior pole and (2) areas of increased autofluorescence corresponding to white dots seen on ophthalmoscopy [9]. In the case n.2, we noted multiple hypo-autofluorescent dots around the chorioretinal scars, the optic disc head and near the inferotemporal vascular arcade. These lesions may represent subretinal inflammatory in-filtrate or loss of the retinal pigment epithelium and suggest a connection between the chorioretinal scars and the development of the white dot syndrome. In conclusion, we report 2 new cases of a white dot syndrome resembling MEWDS in 2 patients with prior ocular toxoplasmosis. Further study is needed to determine if this white dot syndrome is causally related to the presence of prior ocular toxoplasmosis or merely a coincidental occurrence.

K Bailey Freund is a consultant for Optovue, Zeiss, Heidelberg Engineering, Allergan, and Novartis. He receives research support from Genentech/Roche. The remaining authors have no proprietary or financial interests. This work was supported by The Macula Foundation Inc., New York, NY.

White Dot Syndrome in Patients with Prior Ocular Toxoplasmosis

Results: Two young healthy females with longstanding chorioretinal scars due to toxoplamosis presented with acute visual symptoms and clinical findings resembling MEWDS. Both patients also showed inactive scars in both eyes and had positive serological testing for toxoplasmosis. Unilateral deep gray-white retinal lesions corresponding to disruption of the outer retinal bands on OCT were scattered throughout the posterior pole and were more numerous around the chorioretinal scars.