ROS such as Hydroxyl Radicals (OH), Superoxide Anion (O2), Hydrogen Peroxide (H2O2) and singlet oxygen (1O2) are inevitable results of aerobic metabolism [1]. Because of high activity of ROS lipids, DNA and proteins can be their target [2] that caused many illnesses including cancer, cardiovascular disease, cataracts, Alzheimer’s and aging [3,4]. Antioxidants are compounds that can delay, inhibit or prevent the oxidation by scavenging free radicals and diminish oxidative stress [5]. A trend toward the use of natural additives in foods has been apparent for quite some time as a result of consumer demand because safety of synthetic antioxidants such as Butylated Hydroxyanisole (BHA), Butylated Hydroxytoluene(BHT), Tert-Butyl Hydroquinone (TBHQ) and Propyl Gallate (PG) [6,7] has been questioned [8]. Recent research has focused on isolation and characterization of effective natural antioxidants [9-12]. Natural antioxidants act (a) as reducing agents, (b) as free radical scavengers, and (c) as quenchers of the formation of singlet oxygen. They can be used in the food industry and there is evidence that they may exert their antioxidant effects within the human body [13,14]. People receive antioxidant supplements directly from fresh fruits and vegetables. The World Health Organization estimated that <80% of the earth’s inhabitants rely on traditional medicine for their primary health care needs and most of this therapy involves the use of plant extracts or their active phenolic components [15] which have efficient antioxidant capacity. According to the published papers, the research on OH, H2O2 and O as reactive oxygen species are widely carried out [16-18] whereas 1O2 oppressed and less have been investigated because scavenging of DPPH free radical is the basis of a common antioxidant assay and most often an overall antioxidant effect was measured [19].

However, singlet oxygen has not radical nature. Oxygen molecule in its ground state has two unpaired electrons and when oxygen molecule has excess energy, these unpaired electrons in the external orbital can be pair and generate singlet oxygen [20]. One of the physical methods for producing singlet oxygen is applied photosensitizer. Great photosensitizers have received attention, due in part to their direct relevance to many biological systems. The photosensitized production of singlet oxygen has significance in the areas of the photooxidation of organic compounds, DNA damage and Photodynamic therapy [21-26]. electrophilic tendency of singlet oxygen causes lipids, amino acids, nucleic acids and electron rich molecular can be its target [27].This project was designed to characterize antioxidant potential of dill as a natural antioxidant due to its phenolic and flavonoids compositions and how its effect on toxic properties of different ROS specially singlet oxygen [28]. Oleic acid oxidation process was monitored by UV-Vis and PV (meqO2/Kg) methods in the presence and absence of dill as an antioxidant and the results showed dill has efficient role to control oxidation process.

Oleic acid, ethanol, DMSO, hydrogen peroxide, acetonitrile and KO2 were purchased from Fluka and Merck without further purification. Tetraphenyl porphyrin (H2TPP), ZnTPP and FeTPP and were synthesized according to the literatures [29]. Preparation of dill extract: Cold solvent extraction method was applied to separate the dill extract. Dill plant was dried, milled and then strained through sieve No. 40. Powdered form was mixed with solvent at 1:10 ratio on a shaker at room temperature for 24h and then the mixture was filtered using filter paper and vacuum pump. The solvent was removed on a rotary evaporator under vacuum in order to minimize the loss. The remaining solvent was removed using nitrogen [30].

PV (meq O2/kg) of the samples was determined according to the literature [31]. Oleic acid oxidation process was monitored by UV-Vis (Shimadzu 2100 spectrophotometer). 1H NMR spectra were obtained on a Bruker AMX 300 MHz spectrometer using TMS as internal standard.

In this work the oxidative alterations of oleic acid as a result of oxidation with singlet oxygen, superoxide radical, hydrogen peroxide and radical hydroxyl were analyzed in the presence and absence of dill as a natural antioxidant due its phenolic compounds. Our target was fatty acid oxidation by different ROS with focus on singlet oxygen as a noble species which has worked few studies on it [19]. Photooxygenation of oleic acid with H2TPP was investigated as a typical standard sample to evaluate singlet oxygen production (Scheme 1) and fatty acid oxidation monitored by iodometric method as a popular method. (Table 1) confirmed that singlet oxygen produced by applying different kind of photosensitizers. It is important to note that 1H NMR (see supporting information) and peroxide value the oxidation of oleic acid to peroxide product stopped in the absence of porphyrin (Table 1 entry 1) or when the irradiation was interrupted (Table 1 entry 2). Accordingly, the presence of a porphyrin, light and O2 are essential for the conversion oleic acid to corresponding products (Table 1 entry 3). 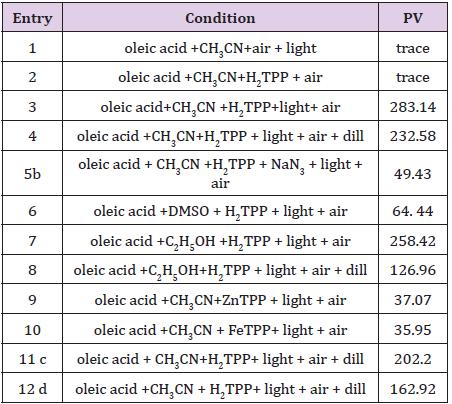 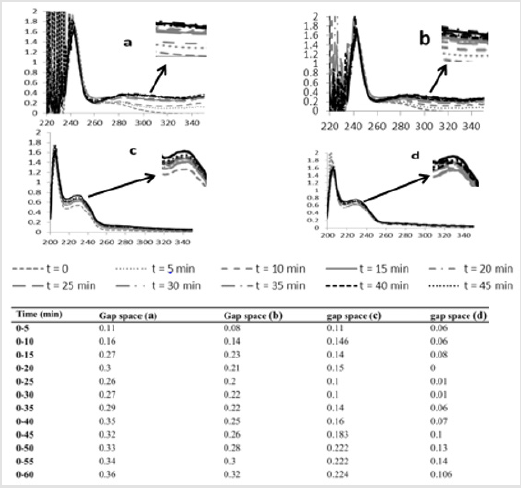 Also, in the presence of N3-, which is a well-known (Figure 2) singlet oxygen scavenger [32] conversion was inhibited (Table 1, entry 5). In the presence of NaN3- degradation of the porphyrin sensitizers was also inhibited. Table1 entry 6 indicates that in the presence of DMSO conversion of oleic acid considerably diminished. Singlet oxygen lifetime is the important issue for gaining efficient yield during photooxygenation. According to the literature singlet oxygen lifetime in DMSO is 19𝝁s, 65𝝁s in acetonitrile and 38𝝁s in ethanol which was corresponded with the results in Table 1 (entry 3,6,7) [33-35] (Seheme 1). One of the key issues to efficient photooxygenation is photosensitizer. Singlet oxygen generation by different photosensitizer and their reactions with the oleic acid obey the order of H2TPP > FeTPP > ZnTPP. Paramagnetic metals are claimed to quench singlet oxygen by energy transfer mechanism from oxygen to the low-lying d electron levels and have very short triplet lifetimes (Table 1, entry 9,10) [36]. Oleic acid photooxygenation in the presence of dill as an natural antioxidant has the finest effect on limiting or preventing of oxidation due to its flavonoids compounds which is the most important family of exogenous antioxidants (Table 1 entry 4,8) [37] singlet oxygen scavenger. c1 cc antioxidant (contains 1.12mg flavonoid). d 2 cc antioxidant (contains 2.24 mg flavonoid Seheme 2). 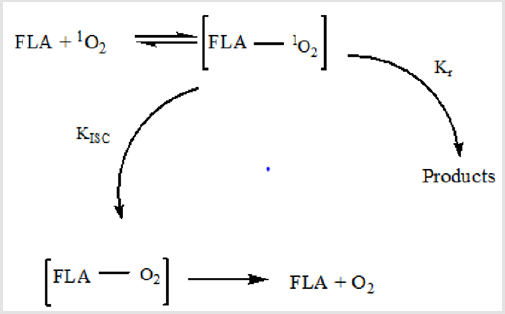 Scheme 2: The mechanism of flavonoids barricade against singlet oxygen.

As a result of daily life diet and the effect of different amount of natural antioxidant such as fruit, vegetable and herbals plants, our experience on dill showed how different amounts of dill as a natural antioxidant has efficient effect on restrict to produce peroxide as primary products. Results showed by increasing dill concentration the oleic acid oxidation rate or PV (meq O2/kg) numbers were decreased (Table 1 entry 11, 12). In the case of oxidation by radical hydroxyl OH⦁ and hydrogen peroxide H2O2, applied Uv-Vis method and idometric titration. Idometric as a popular method has limited and it is not an accurate method to measurable these ROS because of their peroxide agent. Although by extracting this oxidizing specie PV (meq O2/kg) were calculated and dill showed that it is finest natural antioxidant to face with H2O2 after 1h and OH⦁ after 3h (Table 2 entry 1 and 2 for H2O2, entry 3 and 4 for OH⦁). Also, with UV-Vis method antioxidant property of dill was proved (Figure 2). According to the literature oxidation of polyunsaturated fatty acids is accompanied by an increase of absorption in the ultraviolet range (200-380nm). Lipids containing dienes or polyenes show a shift in their Double bond position during oxidation due to isomerization and conjugation formation [38]. In the presence of dill as an antioxidant the oxidation process by OH⦁ and H2O2 changed (Figure 1 column b and c). Column a and b represent oleic acid absorption gap spaces at 𝝀=312nm by OH⦁ and column c and d represent oleic acid oxidation absorption gap spaces at 𝝀=230nm by H2O2 in the presence and absence of antioxidant after oxidation.

These results showed that in the presence of dill as an antioxidant absorption gap spaces per 5min is less than absorption gap spaces in the absence of dill for 1hour oxidation which demonstrated dill has good effect on control of oxidation because of its polyphenol composition and antioxidant activity [39]. Also comparative of UVvis and iodometric data have been good agreement in the oxidation process. Our investigation of superoxide anion radical was based on PV (meqO2/kg) (Figure 2). Lack of willingness oleic acid reaction by superoxide anion radical caused monitoring of products at longer period [40]. Results showed dill had the best effect on limitation of oleic acid oxidation during the 12 h oxidation and its antioxidant effect on O2⦁ is more efficient than vitamin E as one of the best well known lipid soluble antioxidant.

Increase of diseases such as cancer, Alzheimer’s disease, skin disorders, etc. because of human bad lifestyle and their incorrect eating habit turns broaden our view on using new, safe and none side effect medicine such as herbal and planet source. In this study it was showed dill has an efficient effect as a natural antioxidant on restricting or limitation oxidation fatty acid by different toxic ROS. In fact, dill had high antioxidant capacity for inhibition of 1O2 and the other ROS.

We gratefully acknowledge support from the Kharazmi University.