Salinization is one of the main problems in the semi-arid Pernambuco region. Therefore, producers are obliged to use water with high concentrations of salts for irrigation and food production [1]. In view of the above, desalinators have been implanted with increasing frequensscy in order to obtain potable water. However, despite having advantages, it has as main disadvantage the generation of high salt level waste that can cause environmental problems [2]. Therefore, salt-tolerant halophytes, even beyond the concentrations of seawater, can bring significant benefits to rural communities. However, there is no competition for the use of land or water between profitable conventional attitudes and plants tolerant to high salt content [3,4]. In the work of [5], it was found that halophytes also have the potential to be used for pharmaceuticals, functional foods, and adequate management practices to exploit saline soils and desalinator rejects. As seen, this type of plant has a very diversified use, ranging from the recovery of degraded areas, pollution of biomass, feeding of cattle or human feeding. Among these species is Salicornia (family Salicornioideae), which presents extensive development in saline areas associated with coastal lines, tidal floodplains and salt lakes. They are distributed worldwide and found on all continents, except Antarctica [6,7]. In order to contribute to the minimization of the negative effects of the inadequate use of the desalinator waste, an experiment was proposed to analyze the absorption of the chemical-bromatological composition o in the development of Salicornia ramosissima submitted to different levels of salinity.

The experiment was conducted from November 2017 to March 2018, under greenhouse conditions, at the Institute Agronomic of Pernambuco - IPA, Recife, Pernambuco, Brazil. The experimental design was completely randomized, in a 2 x 2 x 2 x 5 factorial arrangement, corresponding to autoclaved and non-autoclaved soil, inoculated and noninoculated plants, presence and absence of [8] nutrient solution (biweekly) and 5 levels of (total control), water (absolute control), desalinator reject (control) and three salinity combinations, whose concentrations were obtained from addition of sodium chloride (NaCl) to the waste, calculated according to Richards (1954): 7g - CE = 12,612 μS ̸ cm2; 14g = CE = 13,744 μS ̸ cm2 and 21g = CE = 14, 746 μS ̸ cm2, with three replicates. The soil used in the experiment was collected at the IPA Experimental Station, in the city of. State, Brazil, with the following characteristics: sandy texture, soil density - 1.34 g / cm3, pH - 7.60, P-209 mg / dm3 and Ca, Mg, Na and K-33.60, 6.00, 12.00 and 0.70 cmolc / dm3 respectively. The average temperature inside the greenhouse during the experiment was 34°C. According to Köeppen classification, the region presents an As’ (Tropical Moist) climate. The mean relative air humidity inside the greenhouse was 56.6%.

The reject used in the experiment was collected in a desalinator located in the city of Riacho das Almas, Pernambuco, Brazil, with the following characteristics: Electrical Conductivity - 10,905 uS/ cm2 at 25ºC, pH - 7.0, and Ca, Mg, Na and K-139.83, 304.94, 2,760.00 and 22.00 cmolc/dm3 respectively. Salicornia ramosissima 5 cm cuttings were used in the experiment, which were planted on commercial substrates in 128-cell germination trays for a period of 30 days. After 30 days of rooting, the plants were transferred to the polyethylene pots with 8kg of air-dried soil, dewormed, homogenized and sieved in 2 mm mesh, where 50% of the soil was sterilized by autoclaving. The inoculation with Arbuscular Mycorrhizal Fungus - FMA was carried out when the rooted plants were transported to the vessels, adding 50g of spores the Claroideoglomus etunicatum from the FMA Inoculum Bank of the Laboratory of Soil Microbiology - IPA, where they were kept under refrigeration at ± 4°C.

After four months, the shoot and root were collected, separating them at the height of the plant neck, in paper bags, dried in an air circulation oven at 60°C for 72 hours, to determine the dry matter of shoot (MSPA) and root (MSR), the material was ground in a Wiley-type mill, provided with a 42 mm aperture sieve, by means of nitroperchloric digestion [9], determine the contents of the absorbed elements (K, Ca, Mg, Na) and total nitrogen by the microkjedahl method. A soil sample, too, was collected for complete chemical analysis [10]. The data were submitted to individual and joint statistical analysis, pertinent to the studied variables. The variance was tested by ANOVA (Analysis of Variance) using Minitab statistical software.

Figure 1: Mean absorption of the chemical elements (K, Ca, Mg and Na) in relation to the treatments used. 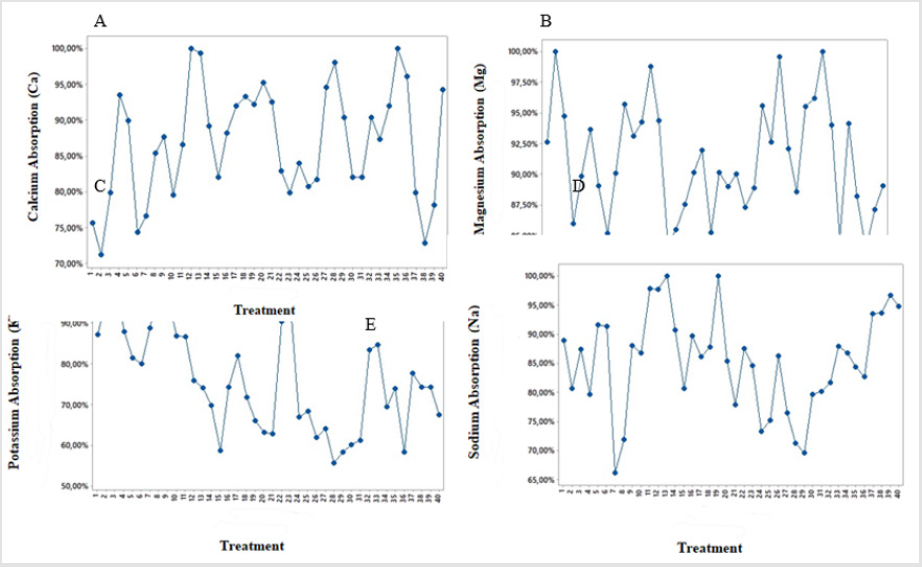 Figure 2A, 2B, 2C, 2D and 2E present individualized information on the absorption of the nutritional composition of the plant with all the treatments used, indicating that Magnesium was the element most absorbed by Salicornia ramosissima [12]. observed that Na absorbed by Atriplex was higher than those of Ca, Mg and K when grown in greenhouse on saline-sodium soil [13]. in experiment with cassava, observed that, in the case of magnesium, the highest levels were also observed in the treatments that received saline water, which provided greater moisture in the soil, which facilitates the absorption of this ion.

In view of the obtained results, it is concluded that the bromatological composition of Salicornia ramosissima was not affected by the increase of salinity of irrigation water. The intermediate dose (S2 – desalinizer reject plus 14g NaCl) showed a better absorption mainly of magnesium. High salinity (S3 - desalinizer reject plus 21g NaCl) reduces the growth of Salicornia ramosissima. The addition of nutrient solution and FMA is not significant for the absorption of the determined elements (N, Na, K, Ca and Mg). The Salicornia was very promising as a phytoextratora.

The authors are grateful to the Coordination of Improvement of Higher Education Personnel (CAPES) for the master’s scholarship, to the Foundation for the Support of Science and Technology of the State of Pernambuco (FACEPE) for the aid search, to the Agronomic Institute of Pernambuco (IPA) for the space physicist, for the Universitas Consortium for the research aid and to the Catholic University of Pernambuco, for the support in the experiment.

The authors declare that they have no conflicts of interests.

Clinical Presentation and Intervention: We report a case of a 46-year-old male who sustained a closed fracture of the left tibial plateau and proximal fibula. The patient underwent an intramedullary nailing and hollow screws surgery. The long leg brace was fixed for two weeks after the operation. Two weeks later, functional exercise was conducted under the guidance of the rehabilitation physician. The patient improved muscle strength and obtained high scores for HSS and AKSS in a relatively short time.