Traditional, laboratory-based biomechanical (force) recording systems have relied on wired strain gage or force plate transduction systems conditioned by bridge amplifiers (analog or digital) with output signals digitized using an A/D converter (external box or internal plug-in module) interfaced to a benchtop computer. Device calibration usually involves the application of known loads (certified masses) to the various sensors to establish their gains and control for baseline offsets. Analysis of acquired data usually involves separate offline routines coded in a variety of languages. These laboratory setups have provided invaluable data and important contributions to our understanding of biomechanics in neurotypical and disordered participants. However, instrument size, cost, and portability generally limit where biomechanical measurements can be made, especially in challenging medical settings.

The ForceWIN10 software was designed to provide exceptional control to the clinician while remaining easy to use. Device management, force test protocol creation, data collection, and dependent measure calculations can be performed within a single user-friendly program.

Devices can be connected, calibrated, and configured without leaving the software. Wireless connectivity is provided via Bluetooth. A two-point calibration can be performed using any desired force (typically 0 and 2 newtons). The two reference forces are applied to a given transducer and digitized. The software then adjusts all future data points from the transducer with a linear calibration.

Custom protocols are generated and stored within the system. A clinician can create a wide range of visuomotor tracking tasks including the specification of absolute force level during rampand- hold, steps, triangular, or other arbitrary force targets. Multiple versions of a protocol can be stored and edited to allow randomization. These protocols can be used for assessment as well as for retraining therapy.

Data is collected interactively from the subject in real-time with biofeedback. A common visuomotor tracking paradigm, known as a ramp-and-hold isometric contraction task, is illustrated in this report and consists of a static target force level (e.g. 2 N) which the subject attempts to attain as rapidly and accurately as possible [3,15-17]. The subject’s force “ramps” from baseline to the target and then “holds” at the target until the end of the trial (typically 5 seconds). Subjects are instructed to relax after each trial. Each trial is followed by a delay of random duration, between 0.5 to 3 seconds, to minimize anticipatory behavior. To minimize the effects of thermal drift or postural changes, baseline correction can be performed between trials by clicking the designated button on the interface.

Various dependent measures can be calculated on any recorded session. The ForceWIN10 analysis routines can generate several dependent measures of force dynamics with the ability to export features for advanced analysis with statistical software or custom MATLAB scripts for aggregated analyses and visualizations across large number of subjects.

The physical components of ForceWIN10 were designed to be accurate, compact, and low power. These components consist of a wireless data acquisition (DAQ) circuit, custom-designed and machined interchangeable stainless-steel fixtures, and a personal computer (PC) operating Microsoft Windows 10. The wireless DAQ collects, packetizes, and transmits samples using a Bluetooth Low Energy radio, two-stage amplifier, and 24-bit ADC. Since strain gage signals are in the microvolt range, the largest degradation of signalto- noise ratio is due to the noise of the first amplifier.

To increase the SNR, a low-noise amplifier (35nV/sqrtHz, 83dB CMRR) is used as the first stage of amplification. The amplified signal is band-limited to reduce noise and prevent aliasing in the ADC. The samples are then digitized at 120 samples per second by a 24-bit ADC with an integrated amplifier. The samples are packetized in groups of 4 to minimize packet overhead and are sent to the PC via Bluetooth. Power efficiency was a priority in component selection and firmware design; Current consumption was 0.78 mA at idle and 4.2 mA during active operation, with an additional 4.7 mA for half-bridge or 9.4 mA for full-bridge strain gage circuits. A small 400 mAh single-cell LiPo battery (3.7V nominal), provides over 500 hours of standby time and 29 hours of continuous operation.

Jaw measurements are collected from the orofacial transducer base (Figure 1b & 1c) which serves as the platform for all orofacial measurement paradigms. Two flat stainless-steel bars extend from a central structure terminating in an attachment point for a pair of 3D-printed titanium trays. One of the flat bars is instrumented with four strain gages in a full-bridge configuration to measure forces exerted between the maxilla and mandibular dentition. Multiple tray sizes are available to accommodate a wide range of maxillary and mandibular dentition sizes and bites, allowing a comfortable fit for most subjects above 6 years of age. The trays are impregnated with a polyvinylsiloxane impression material (Kerr Extrude XP, Kerr Corporation, Romulus, MI, USA) to create a custom mold (2-minutes set time) that results in a comfortable and stable connection to a subject’s teeth (or alveolar surfaces for edentulous subjects). 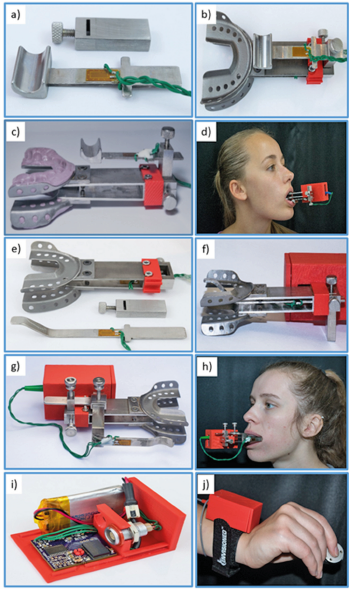 Figure 1: Instrumented orofacial transducer base, including

a) Lip force cantilever with strain gages, and slotted fixture for anterior-posterior and inferior-superior beam translation.

Verifying the ForceWIN10 system consisted of accuracy testing and an initial study in neurotypical humans. Accuracy was verified for each transducer by applying a known force, recording the measured force for multiple levels, and calculating the full-scale percent error as well as the R-squared linear fit coefficient. A preliminary study was conducted to show the ability of the device to work in a clinical setting and collect signals at least as good as found in the current literature. The study consisted of ten ramp-and-hold isometric sequences at 0.25, 0.50, 1.00, and 2.00 N in a repeated measure, randomized block design. The full study is described in a separate paper with N=40 young adults [3]. For the present report, a neurotypical 21-year-old male is examined along with summative statistics over the group.

Forty (40) neurotypical adults (20F/20M, 22.23 [SD = 2.07] years old) were recruited regardless of ethnicity or race. Written informed consent, approved by the University of Nebraska Institutional Review Board, was obtained for each test subject. The inclusion criteria consisted of right-handed adults with no report of neurological illness or injury, not taking regular medication, and with normal corrected vision. Subjects with neurological, sensory or muscular deficits, trauma to face or hand and fingers, or with abnormal skin sensitivity on face or hand were excluded from this study. Subjects were compensated for their participation in this study.

The worst full-scale error in the calibrated range of any transducer was 3.32% for the lip transducer at 2N, however, the average full-scale error was 0.64%. When looking at linearity, the worst linearity was the tongue transducer with an R-squared value of 0.9994. The jaw, lip, and finger transducers had linearity values of 1.0000, 0.9994, and 0.9996 respectively. The first attempt at calculating the accuracy and linearity of these sensors showed a thermal drift during a warm-up period. After waiting approximately 5 minutes, the drift was no longer observed, and the accuracy measurements could take place. The high linearity of these transducers suggests that the majority of the deviations can be attributed to calibration error rather than non-linearity or drift. 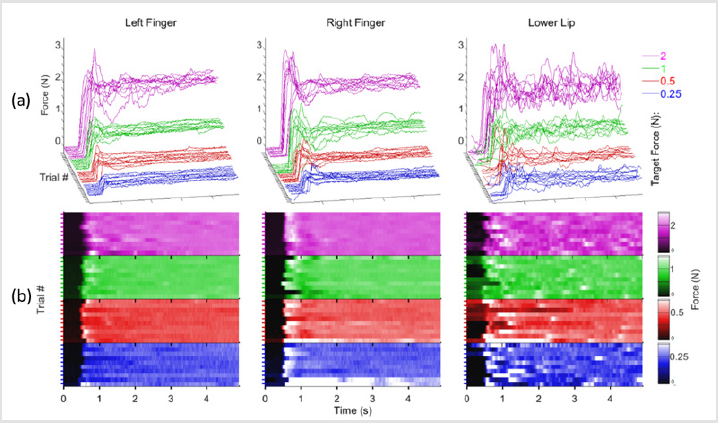 b) absolute force amplitude heat map depicting onsets and hold-phase contractions as a function of structure and target for a single participant.

A representative set of ramp-and-hold force waveforms sampled from a 21-year old male is shown from the right thumbindex finger, left thumb-index finger, and lower lip at four target force levels (Figure 2a). Individual contractions, sequenced along the z-axis in each waveform display, reveal the initial baseline ‘reaction time interval’ followed by the rapid force recruitment to peak, and the subsequent hold-phase to contraction termination (5 sec). Increased variability in isometric force onsets and holdphase performance, and a shorter reaction time for the lower lip trials compared to the thumb-index fingers were observed (Figure 2b). Examination of the mean and standard deviation of hold-phase isometric performance at various target forces for 20 males and 20 females (Figures 3 & 4), show the data are normally distributed about the mean with a small standard deviation. A 40-trial rampand- hold force dynamics assessment plus 3 maximum voluntary contractions can be completed for a single muscle system in approximately 7 minutes. 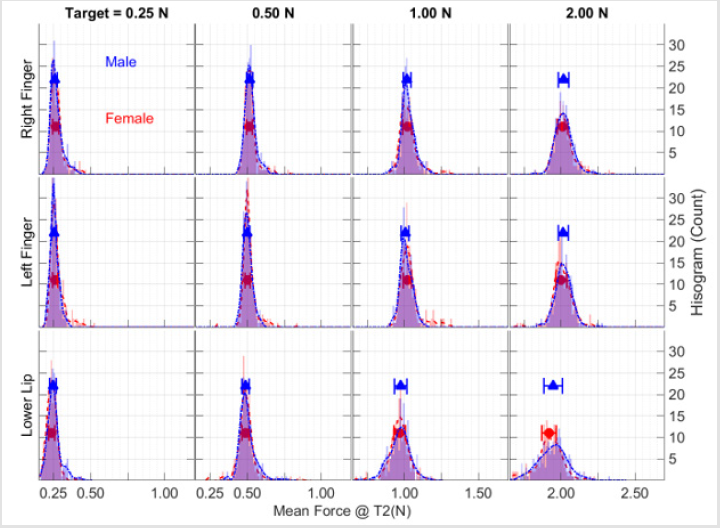 Figure 3: Total sample distributions of mean force during the hold-phase for 20 male (blue) and 20 female (red) participants as a function of target force and test structure plotted as frequency histograms along with the median ± median absolute deviation (MAD) symbols and error bars. 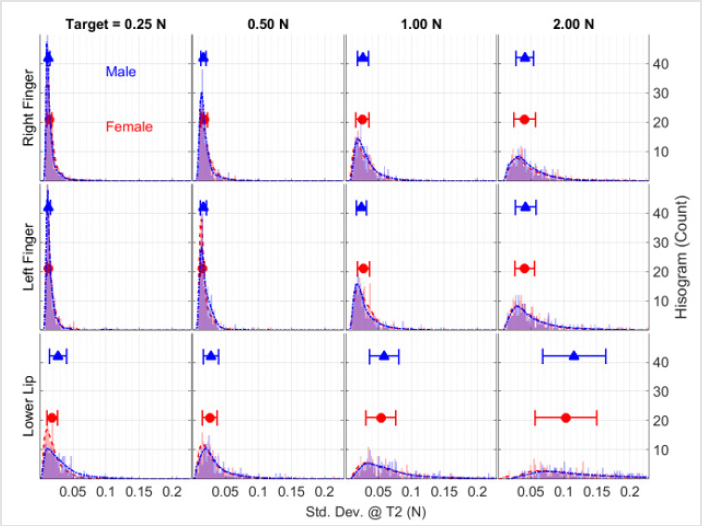 Figure 4: Total sample distributions of the standard deviation of isometric force during the hold-phase for 20 male (blue) and 20 female (red) participants as a function of target force and test structure plotted as frequency histograms along with the median ± median absolute deviation (MAD) symbols and error bars.

The ForceWIN10 platform described in the present report offers clinicians and scientists a portable, wireless, and versatile tool for measurement of isometric force dynamics in orofacial and hand/digit muscle systems. ForceWIN10 has already been used to generate a neurotypical database in young adults [3], with ongoing studies in children (ages 7-12 years) [19], and older adults (35-70 years) to characterize fine force regulation and maximum voluntary force generation across the lifespan. A small database of orofacial and thumb-index force dynamics has also been collected in patients who have sustained unilateral middle cerebral artery infarcts resulting from ischemic stroke with promising results.

Improved portability and operational ease of biomechanical assessment instruments will result in broader clinical use in patients with movement disorders [3,15,17-20]. The inclusion of such biomechanical measures is expected to promote individualized treatment programs to support the rehabilitation of orofacial and hand-digit motor skills which are often impaired in neuromotor disease and injury.

The data used to support the findings of this study are available from the corresponding author upon request.

The authors declare that there is no conflict of interest regarding the publication of this paper.

This study was supported in part by the Nebraska Research Initiative (Barlow), and the Barkley Trust Foundation (Barlow).

Approval for this study was given by the University of Nebraska Institutional Review Board (IRB#16151). Gratitude is expressed to Brianna Wardyn, Kaytlin Tippin, and Anna Jean Scarborough for technical and administrative support.