Objective: Male infertility is a growing social problem. The measurement of telomere length may be a new marker that can help to assess reproductive age of males and assess the chances of in vitro fertilization.

Aim: The aim of our study was to investigate whether there are any differences between telomere length in men with normal and abnormal semen parameters.

Conclusion: The results suggest that telomere length assessment may be a useful future marker that may help to assess sperm cell fertilization capacity.

Fertility is a growing social problem that affects about 15% of couples [1]. Reduced quality of semen is a major problem in many cases. Standard diagnostic procedures based on semen parameters are often insufficient to explain the causes of male infertility, especially in men with idiopathic infertility [2]. Recent studies showed that telomere length assessment may be a promising biological marker of men reproductive age [3]. Telomeres are linear parts of chromosomes that protect chromosome ends against fusion and damage. Human telomeres contain six nucleotide sequences repeated many times. The total length of telomeres is 10-20kbp. They are called the biological clock of the cell, because telomeres shorten with every cell division. Extremely short telomeres are a signal to induce programmed cell death [4]. Various factors may affect the length of telomeres, such as drugs, inflammation or unhealthy diet [5]. Faster telomere shortening is associated with a higher risk of developing certain diseases, such as diabetes, atherosclerosis and cancers [6-8]. The results of published studies show that telomeres are a promising molecular marker that can be useful in predicting the risk of diseases. As mentioned above, telomeres in all somatic cells are shortened with age. The same situation is observed in female reproductive cells, but in sperm cells, telomeres are extended with age [9]. There are only a few, and in some cases, divergent reports on telomere length in sperm cells. Some of them indicate that there is a correlation between telomere length, semen quality and fertilization capacity [3,9-14]. Recent studies have also reported that telomere length in sperm cells play an important role in early embryo development [15,16]. Fertilization with a sperm cell with short telomeres may decrease chances of implantation and normal embryo development, and may be associated with early pregnancy loss [15,17]. The aim of the study was to investigate whether there are any differences between telomere length in men of similar age with normal and abnormal semen parameters.

The research project has been approved by the local Ethics Committee. Biological material was derived from patients, who gave semen for routine examination. All patients were informed about the aim of the study and each participant gave his written informed consent.

Forty-five donors were divided into two groups: with normal and abnormal semen parameters. All donors were of reproductive age (Table 1).

Sperm cells were prepared by density gradient centrifugation. It was important to separate spermatozoa from non-germ cells and other debris. About 1.5ml of fresh liquefied semen was layered on top of 80% gradient (Pureception 80% Lower Phase solution, SAGE) and centrifuged at 600g for 15 minutes. The pellet was resuspended in 2ml of equilibrated medium for further washing after removing the gradient layer and seminal fluid, without disturbing the sperm pellet, (Flushing Medium, ORIGIO) and centrifuged at 600g for 5 minutes. In the last step, the supernatant was removed and the pellets were resuspended in a suitable volume of washing medium.

Table 2: Sequence of primers and oligomers used in qPCR.

Telomere length was determined using monochrome multiplex quantitative PCR (MMQPCR), according to Cawthon [18] with modifications [19]. The dilution series (100pg to 0.0001pg for telomere oligomer and 1pg to 0.0001 pg for albumine oligomer) of synthetic oligomers was used as a reference sample to prepare the standard curve (Table 2). Two standard curves were prepared for each plate, one for telomeres and the other for the reference gene, i.e., albumin. All experimental and standard samples were run in triplicate. Each reaction well contained 2μl of DNA (10ng), 2x SYBR Green PCR Master Mix (Roche), two pairs of primers (telg and telc primer–500nM; albu and albd primer–900nM) and water to a final volume of 10μl. Thermal cycling profile was as follows: 15min at 950C, 2 cycles of 15 s at 940C, 15 s at 490C; 35 cycles of 15 s at 940C, 10 s at 620C, 15 s at 740C with signal acquisition, 10s at 840C, 15 s at 880C with signal acquisition. After thermal cycling and raw data collection, CFX Manager Software (Bio-Rad) was used to generate two standard curves for each plate. The efficiency of the reaction was equal for telomeres and albumine and it was not lower than 95%. The variation of Ct values in the sample was <0.5 Ct (SD<0.25) in both telomere and albumine runs. Mean Ct values were used to calculate absolute telomere length in kbp per haploid genome, as described by O’Callaghan [19]. Statistical analysis. The normality of the variables was evaluated by the Shapiro-Wilk test. The association of telomere length and semen parameters, such as concentration, vitality and mobility was analyzed with Spearman rank correlation coefficient (rs). P-values lower than 0.05 were considered as significant. Statistical differences in telomere length between two groups: donors with normozoospermia and donors with lower fertility were analyzed by Student’s t-test. Data are reported as mean ± SD.

Table 3: Basic characteristic and semen parameters of all donors.

Figure 1: Standard curves for telomeres (A) and for albumine (B). 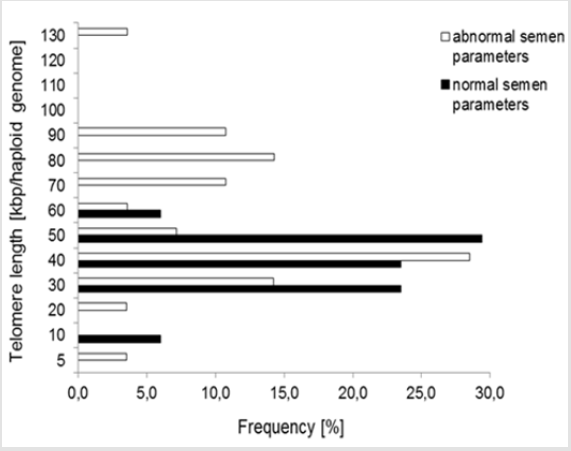 Telomere length and structure play an important role in maintaining genome integrity and they are also crucial for recombination, meiosis and pronucleus formation, following the entry of the sperm into the oocyte. The role of sperm telomere length in male fertility is not known [3]. As indicated by Kimura et al. [20], mean STL in sperm does not decrease. In fact, it increases with donor age. Older men have longer telomeres. Fortyfive sperm donors of similar age were examined. Seventeen of them were characterized by normozoospermia. The rest of them had reduced fertility. In addition, this group included men with different, reduced sperm parameters (Tables 1-3). In our study, patients with normozoospermia had lower telomeres than patients with abnormal semen parameters (Figure 2). Recent studies by Rocca et al. [14,11] demonstrated that STL increased with age and men with oligozoospermia had shorter sperm telomeres than normozoospermic men.

Shorter telomeres in sperm may be one of the causative factors responsible for male infertility, but further detailed studies are needed to confirm these findings [3]. The results of scientific studies on telomere length in infertile men concern patients with oligozoospermia and idiopathic infertility [21]. In our study group, there are patients with changes in sperm motility and morphology. Perhaps telomere length is different in these study groups compared with patients with oligozoospermia and idiopathic infertility. More research is needed to prove this hypothesis. Moreover, we have not taken into account other factors like lifestyle, oxidative stress and environmental pollution. Mild oxidative stress results in telomere lengthening, but severe oxidative stress causes shorter telomeres [22]. Although telomere maintenance is a complex trait, studies have shown that mild oxidative stress is beneficial in maintaining telomere length, and thus a delicate balance needs to be established to maximize the beneficial effects of free radicals and prevent harmful effects of supra-physiological levels [22-24]. Oxidative stress induces an inverse relationship between telomere length and abnormal nuclear morphologies [25]. The another studies indicate that male residents in areas with high environment exposure had a significant increase in STL. This finding supports the view that the human semen is a sentinel biomarker of environmental exposure [26]. Acute and chronic exposure to high levels of ambient pollutants may impair male fertility by affecting sperm quality, but the real effect size remains controversial [14,27] reported that STL was associated with standard semen quality parameters and, more importantly, it was significantly associated with the level of DNA fragmentation and sperm protamination. Among standard semen parameters, STL was positively associated with progressive motility and vitality.

In our study, STL in patients with normozoospermia was positively associated with sperm concentration and vitality. There was no correlation between STL and motility in these donor groups. Negative correlation between STL and vitality and sperm concentration was observed in donors with abnormal semen parameters. Unlike the latter study, we found no correlation between STL and age, as in other [11-30]. However, for the present study, we selected men with normozoospermia as control and men with astenozoospermia, teratozoospermia, astenoteratozoospermia and oligoastenoteratozoospermia in the same age range. This is probably the reason why the aforementioned associations were not observed and STL in patients with normozoospermia was lower than in patients with abnormal semen parameters. In fact, the demonstration that STL is an additional sperm parameter may open new perspectives in the evaluation of infertile males [31,32]. Additional research on men of proven fertility and infertility will clarify the significance of this biomarker also as a quality parameter for semen.

The study was supported by internal grant from Department of Biotechnology University of Opole. The authors thank Natasha Ng, a scholarship holder of the Fulbright Foundation for linguistic correction of the text.

The authors declare that they have no conflicts of interests

Objective: Male infertility is a growing social problem. The measurement of telomere length may be a new marker that can help to assess reproductive age of males and assess the chances of in vitro fertilization.

Aim: The aim of our study was to investigate whether there are any differences between telomere length in men with normal and abnormal semen parameters.

Conclusion: The results suggest that telomere length assessment may be a useful future marker that may help to assess sperm cell fertilization capacity.