The association of bacteria with fungal species in biofilms can provide substrates, metabolites and growth factors in certain circumstances [1], and these interactions or “communication” mechanisms between distinct species living in biofilms, which occur when microorganisms exchange chemical signals, are known as quorum sensing (QS) [2]. Microorganisms within biofilms can also belong to the same species, and the generated signals can freely spread and diffuse across the cell membrane into the medium, thereby orchestrating biofilm formation [3]. The QS molecules which have been found in the spent culture supernatant (SCS) of bacterial and fungal cultures have been noted as regulators of virulence mechanisms related to biofilm formation, especially in pathogenic biofilms [4]. Frequently, S. mutans and C. albicans are found together in oral biofilms [1]. Thus, considering the polymicrobial characteristic of dental caries, investigating the way that interactions between microbes affect biofilm formation and cell morphology is essential to understanding the pathogenesis of this disease [5]. Therefore, this study aimed to evaluate the influence of C. albicans and S. mutans SCS, combined or not, in the biofilm formation of these microorganisms grown in their singlespecies and dual-species biofilms.

Strains of C. albicans (ATCC 10231) and S. mutans (UA 159) were grown in YNB and BHI, respectively, for 18 h, at 37 °C under microaerophilic conditions [6]. The microbial cultures were adjusted to a 0.5 Mc Farland standard (equivalent to 1.5 ×108 CFU/mL) in YNB broth supplemented with 1% glucose (w/v) and BHI broth supplemented with 1% sucrose (w/v), respectively. The microorganisms were inoculated separately into the wells of in microtiter plate and incubated at 37 °C (5% CO2 ) for 48 h, with culture medium replaced every day. After this period, for SCS obtainment, the biofilms were centrifuged at 1,300 rpm (NT-835, Novatecnica, Piracicaba, SP, Brazil) and SCS filtered with 0.22-μm membranes filters as previously described [7,8]. The single and dual- species biofilms were grown in vitro in the presence of the studied SCS combined or isolated, cultured in RPMI-1640 medium for 48 h [1]. Following this period, the biofilms were collected, the biomass was determined [9] and soluble and insoluble extracellular polysaccharides were assessed [10]. The polysaccharide analysis was expressed as total extracellular polysaccharides (tEPS) by adding the values of soluble plus insoluble extracellular polysaccharides. Data were expressed as a mean and standard deviation, and group comparison was performed by Student T-test or ANOVA followed by Bonferroni´s post-hoc test. Graph Pad Prism version 5.0 was used for data analysis and a 95% confidence value was considered

Our results showed no difference in S. mutans biomass when in contact with both SCS tested (Figure 1a). However, there was an increase in C. albicans biomass in the presence of its own SCS (Figure 1b). In the dual-species biofilms, the S. mutans biomass was statistically significant (p < 0.001), decreased if co-cultured with the C. albicans SCS compared with the control group (Figure 1c), while the dual-species biofilm showed no difference of C. albicans counts if compared with the control group (Figure 1d). Regarding the total extracellular polysaccharides (tEPS) produced by S. mutans when in contact with its own SCS and C. albicans SCS (p=0.0002) (Figure 2a), a significant increase in their amounts was observed (p<0.0001). Additionally, in a single-species biofilm of C. albicans a markedly increase in tEPS production occurred when the biofilm was cultured in contact with S. mutans SCS (p = 0.0025) (Figure 2b) as well as in the tEPS production in the dual-species biofilms cultured S. mutans SCS and when cultured in the presence of both SCS (p <0.0001) (Figure 2C). In this study, we investigated the role of S. mutans and C. albicans SCS on the formation of single- and dualspecies biofilms. We chose to study these microorganisms because previous investigations have shown that the interaction between them can modulate the development of dental caries [7,8]. 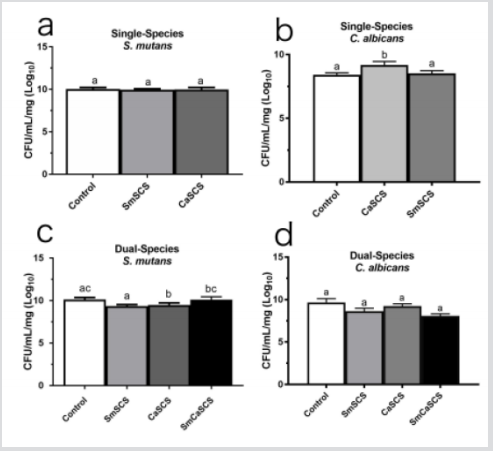 According to our findings, both SCS did not affect the biomass of S. mutans single-species biofilms (CFU/mL/mg). However, a significant increase in tEPS (p < 0.0001) was observed. This result can be explained by the fact that the alterations caused in the biofilms by the SCS might not be related to growth kinetics, but to polysaccharides production, which corroborates with previous results [3,11]. Extracellular products of C. albicans affect the activation of genes related to polysaccharides production in S. mutans [12]. In C. albicans single-species biofilms, an increase in the biomass and insoluble polysaccharide production when cultured in the presence of S. mutans SCS [11] was found. In this study, S. mutans SCS favored C. albicans biofilm formation and polysaccharides production. Our results agree with previous studies which have shown a symbiotic relationship between C. albicans and S. mutans in dental caries biofilms [3,7,11] and indicate that C. albicans cultured with S. mutans increases biofilm biomass. Moreover, extracellular molecules produced by S. mutans enhances C. albicans filamentation. Our results disagree with studies reporting that S. mutans quorum sensing molecules negatively interfere with C. albicans biofilm formation and that the quorum sensing competence inducing peptide (CSP) molecules act by decreasing C. albicans viability in co-cultures [3,13].

We can suppose that only a physiological concentration of CSP produced by S. mutans was secreted and higher amounts would be necessary to affect C. albicans. Although C. albicans SCS could positively influence S. mutans cells, interactions between pathogenic bacteria and fungi remain unknown. This result confirms the symbiotic relationship between these microorganisms also previously described [7,11]. This study provides new information on interactions between microorganisms of different kingdoms. In summary, the S. mutans SCS increased the C. albicans biomass in single-species biofilms and the tEPS production of S. mutans and C. albicans in both models of biofilms. In contrast, C. albicans SCS reduced the biomass of S. mutans in single-species biofilms. Other studies must be performed to clarify the molecular mechanisms involved in the pathogenesis of dental caries biofilms formed by the microorganisms studied in this investigation.

The first author was supported by a CAPES (National Council for the Improvement of Higher Education) scholarship funded by the Brazilian government during her Master degree course, when this research was conducted.