Objectives: This study aims to assess association of the co-morbid conditions and the viral hepatitis types with the liver fibrosis stage in non-responder patients (ie de novo resistance or resistance within one year of conventional therapy).

Methodology: All patient with a confirmed diagnosis of viral hepatitis, have completed their interferon based first line therapy, came to the shearwave elastography unit during a period of 39 months (i.e. April 2014-June 2017) were included. All patients were non-responders to conventional therapy with positive viral load on Polymerase Chain Reaction (PCR). Patients were interviewed for co morbidities with interest in diabetes, Hypertension and Hypercholesteremia. Their liver fibrosis was assessed by using Supersonic imagine Aixplorer, shearwave elastography system. The liver fibrosis stage was defined according to METAVIR scoring system.

Results: Out of 3051 patients with viral hepatitis 1733 were found to have recurrence within one year or they did not respond to conventional therapy at all. High liver fibrosis stage (stage 3 & 4) was significantly associated with HDV with and without positive HBV (p<0.001), metabolic syndrome (p<0.001), and older age (P<0.0001). Diabetic patients showed higher proportion of high stage of fibrosis.

Conclusion: Older population with diabetes and metabolic syndrome produce deleterious effects on the liver status by worsening liver damage caused by the viral hepatitis. Therefore these patients should be checked closely.

Viral hepatitis caused by at least five known viruses namely Hepatitis A virus (HAV), Hepatitis B virus (HBV), Hepatitis C virus (HCV), Hepatitis D virus (HDV) and Hepatitis E virus (HEV). Among these HBV, HCV and HDV have potential to progress to chronic state. It is reported that 5% of world’s population has HBV infection and 2% HCV infection which makes approximately 400 and 180 million respectively [1,2]. A great majority of which (i.e. 75%) belongs to Asian countries[3-5]. The progression to chronic state makes liver at the risk of more inflammation resulting in progressive fibrosis ending up with cirrhosis of liver. A small fraction of patients with chronic viral hepatitis may also develop carcinoma liver. However, 85% of the liver cancers occur in the developing countries and 80% of which has been reported to be linked with viral hepatitis [1]. The key concern with the chronic state is the development of liver fibrosis, eventually resulting in cirrhosis, putting patients at higher risk of hepatocellular carcinoma and death due to complications of extensive liver damage.

It is reported that normal liver status after viral hepatitis has 11% chance of developing cirrhosis in ten years, the risk rises to 47% at stage 2 and 3 liver fibrosis [6]. Development of liver fibrosis results from simultaneous endogenous inflammation and healing process of the hepatocytes. The chronic inflammation with replacement of damaged hepatocytes by fibrous tissue (mainly collagen) and ongoing regeneration of the hepatocytes in nodular form resulting in complete distortion of the liver architecture (Figure 1). However, at the early stage this fibrosis is reported to be reversible. Data from clinical trials suggest that there are at least 88% chances of fibrosis regression after antiviral therapy [7]. Currently available literature suggests that older age, male gender, alcohol abuse and multiple virus infection expedite the fibrosis and early development of end stage liver disease [8,9]. However, in cases where patients did not respond to the conventional therapy, the status of fibrosis and factors that expedite the process have yet to be explored. This study was aimed to assess liver fibrosis status in patients who failed to respond to conventional interferon antiviral therapy and correlate fibrosis stage with co morbidities including diabetes, s and hypercholesteremia. 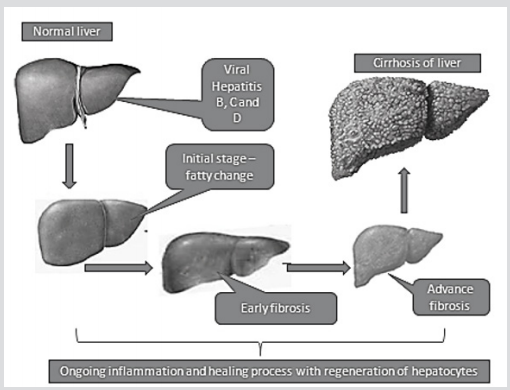 During the period of 39 months (i.e. April 2014 till June 2017) patients with confirmed diagnosis of viral hepatitis were included. All these patients had their diagnosis confirmed on polymerase chain reaction (PCR) within one year of the completion of conventional therapy and labeled as non-responders. There was no age restriction. Patients with established uncompensated cirrhosis (those with ascites) were excluded. All the patients were interviewed regarding their co-morbidities as part of routine history taking. The co morbidities considered for this study were Diabetes mellitus, Hypertension and metabolic syndrome (diabetes, hypertension and hypercholesterolemia). Metabolic syndrome was labeled when patient had lipid profile report or taking lipid lowering agents for fewer than six months.

Liver fibrosis assessment was done on Shearwave elastography by using Supersonic Imagine, Aix-en-Provence, France (v8.20) with Super curved TM (SC6-1 64mm Super Curved Array) probe. The default liver setting was used with maximum reading 30 Mean Kilopascals (KPA) [10]. For fibrosis assessment at least nine areas were taken and the mean KPA was taken from each area. Finally, median reading of the nine scores was taken as the average fibrosis stage. For reporting METAVIR score was followed [11-13]. Color pattern of liver fibrosis stage on shearwave elastography is given in Figure 2.

Classical 46 XX male have normal testosterone level and free testosterone level during adolescence, but may decrease in adulthood, leading to hypergonadotropic hypogonadism [7]. Our cases had normal genitalia and were diagnosed for infertility after puberty. Treatment of manifestations ; just like that for different causes of androgenic hormone deficiency. when age fourteen years, lowdose androgenic hormone medical aid is initiated and step by step increased to achieve adult levels. In affected individuals with short stature who are eligible for growth hormone therapy, testosterone therapy is either delayed or given at lower doses initially in order to maximize the growth potential. Reduction mammoplasty might have to be thought-about if abnormal condition remains a difficulty following androgenic hormone replacement medical aid. Treatment for osteopenia is by standard protocols. 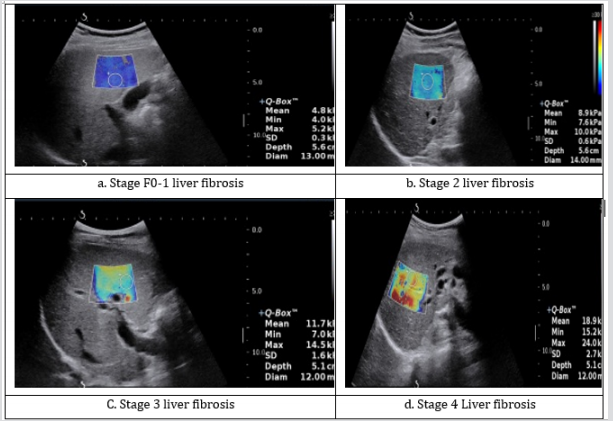 A total of 3051 patients came with viral hepatitis and 1733 were labeled as non-responders or developed recurrence within one year. Median age was 35 (range 7 to 85) years. All 1733 were interviewed regarding co-morbid conditions. A total of 1162 (67.1%) were found to have no significant co-morbidity, 25.7% had hypertension, 3.7% had diabetes and 3.6% had metabolic syndrome (all three disorders including diabetes, hypertension and hypercholesteremia). A great majority of the patients were found to have Hepatitis C virus (61.6%) followed by Hepatitis D (with and without B virus positive, 16.8% and 18.0% respectively) and Hepatitis B (3.7%). Hepatitis D virus with and without B virus showed significant relation with higher stages of liver fibrosis (p<0.001). Among co-morbidities metabolic syndrome showed significant relation with the higher stage of the liver fibrosis (<0.001). Older age was significantly associated with higher fibrosis stage (p<0.001). A summary of results is presented in Table 1.

Table 1: Summary of the viral Hepatitis patients and their correlations. 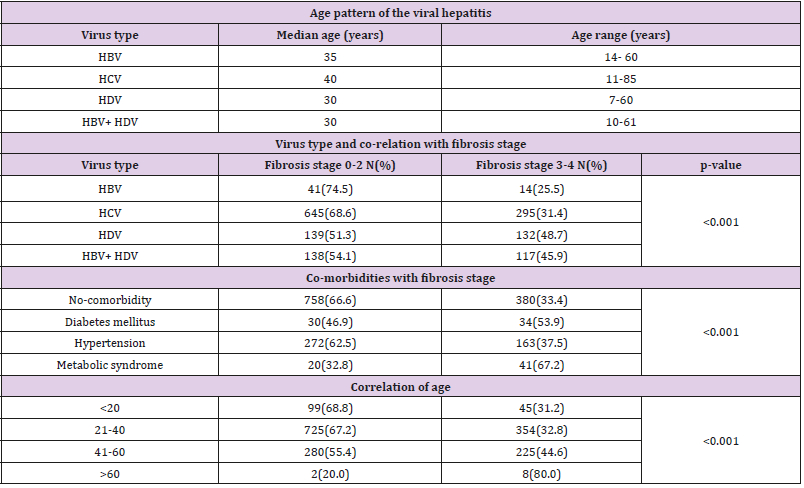 The liver fibrosis is a continuous inflammatory and healing process as a result of viral infection. Ongoing inflammation results in damaged hepatocytes replaced by fibrous tissue i.e. mainly collagen, additional regeneration of the hepatocytes giving a characteristic pattern of cirrhosis of liver [14,15]. The tissue distortion also involves intrahepatic vasculature resulting in most of the lethal complications of cirrhosis i.e. ascites, esophageal varices and hepatic encephalopathy [16-19]. High fibrosis (i.e. cirrhosis) also puts patient at high risk of developing hepatocellular carcinoma. Treatment of the viral hepatitis has potential to reverse these fibrotic changes probably because of amazing healing capacity of liver. Data from clinical trials reported regression of fibrosis in as much as 88% of patients. However, in patients where the primary treatment failed to clear the virus make these patients at a little higher risk of ending up with cirrhosis. Common viral hepatitis leads to chronic inflammatory process and resulting in cirrhosis include B, C and D. The rate of these viruses is high among developing countries among Asian population. The rate of primary treatment resistance is reported as 0-24% in the first year of therapy in the targeted population.

However, this rate goes up to 70% after three years. There is a complex environmental and genetic mechanism which governs the response to treatment as well as progression of the fibrosis in liver. In different studies advancing age, obesity, co infection with other viruses including HIV expedites the fibrosis of liver. In our population where they failed to respond to therapy de novo or within one year have shown that age and co-morbidities play significant role to expedite the fibrosis. In our study the role of metabolic syndrome comes up more prominently as compare to diabetes alone. As previously reported, lipid metabolism abnormalities, insulin resistance, central obesity are notable factors leading to early cirrhosis and a cause of hepatocellular carcinoma [20]. This involves a complex intracellular and organ changes where accumulation of fat resulting in inflammatory response leading to non-alcoholic fatty liver eventually resulting in healing by fibrosis. Thus, the lipid metabolism could be a serious issue for liver health. In our study we have shown that if these factors come under one umbrella of metabolic syndrome produce even poor outcome.

In our population Hepatitis D virus with and without positive B showed high rate of stage 3 and 4 fibrosis. This is very interesting finding that greater population in our study had HCV infection this may highlight an uncovered truth that more resistance is seen in HCV infection but high rate of fibrosis among HDV. However further long-term studies are required to answer this question. This study includes all the non-responders on the conventional therapy who are at potential risk of high fibrosis, however we appreciate the limitation of study by not tracing out the duration of the infection. This may be considered as default limitation because many patients were not aware of the time of exposure. It is suspected that the duration of the infection could have also influenced the natural progression of the fibrosis. The extensive analysis of the metabolic factors in the liver involving diabetes, lipid metabolism and the fibrosis development need to be studied.

Liver fibrosis and eventual development of cirrhosis remains a dilemma of chronic viral hepatitis. Patients who do not respond to conventional therapy remain at even higher risk. Following the results in our study population having co-morbid conditions related to lipid metabolism or diabetes should be taken seriously and the treatment may be planned accordingly. However, serum and tissue factors related to fibrosis and metabolism need to be identified in order to establish new treatment regimens.