Positron Emission Tomography (PET) is a multidisciplinary science. In contrast to CT and MRI, which are structural imaging techniques, PET is based on the characteristics of positron emitterslabeled radiopharmaceuticals and has been applied to study human pathophysiology in vivo non-invasively. In addition, PET has also been applied to monitor the efficacy of therapies, study drug pharmacokinetics (PK) and drug pharmacodynamics (PD). To design PET radiopharmaceuticals for brain neurotransmitters imaging, several factors has to be taken into consideration:

2) Binding Selectivity and Specificity: the higher the better;

4) Specific Activity: the higher the better;

Alzheimer’s disease (AD) is one of the most frequent causes of death and disability worldwide and has a significant clinical and socio-economic impact. Although the precise cause of AD remains unclear, it is most likely due to multiple etiologies such as neuronal apoptosis, inflammatory responses, and alterations in various receptors and enzymes. Thus, several PET imaging agents that target multiple mechanisms such as various receptors, enzymes and β–amyloids have been developed [1,2] for monitoring the response of AD drug therapy non-invasively and facilitating AD drugs development. [18F]FDDNP (Figure 1b) was one of the first tau protein PET imaging radiopharmaceuticals for Alzheimer’s disease and chronic traumatic encephalopathy [3]. In order to increase its lipophilicity and consequently improve its brain uptake, we have synthesized its analog ([18F]FEONM, Figure 1a) and evaluated it as a potential tau protein imaging agent. 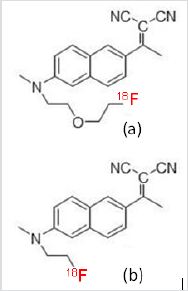 Figure 1: Structure modification of [18F]FDDNP will increase the lipophilicity and the new structure named [18F]FEONM. Therefore, the no Beta amyloid [18F]FDDNP has become an both Tau tangle and Beta amyloid uptake Alzheimer disease imaging agent [18F]FEONM.

The [18F]FEONM (Figure 2, 2) was synthesized by nucleophilic fluorination of the corresponding tosyl- precursor (Figure 2, 1) in acetonitrile with K[18F]/K2.2.2 at 95 ℃ for 15min followed by purification with a semi-preparative HPLC (Fortis® Part No. FPH 100905, 5μm diphenyl, size: 250x10mm) and solid phase extraction gave product in 20-30% non-decay corrected yield (EOS) in a synthesis and purification time of 40min from EOB. The radiochemical purity of [18F]FEONM was determined using an analytical HPLC (Cogent C18 100A 5μm, e Series,150mmx4.6mm, Cat.No.78018-15P). The keystep of producing F-18 labeled PET radiopharmaceuticals online is radiofluorination. One of the best reactors for radiofluorination is made of carboxy glass [4]. In carboxy glass reactor, the reaction rate of [18F]FEONM will be a first order reaction in the beginning, with n order reaction at time ta to achieve highest yield and end at time tb, then gradually decompose with -m order reaction and end at time tc. Therefore, for the function of gap area (FG) [5] curve can be approached with Gauss distribution, Gauss or Welch apodization function. Since the solution of the integration form of Gaussian apodization function is error function, cannot be found an analytical form at its minimum area by calculus. However, the length of microfluidic plug flow reactor can be designed based on Welch apodization function with an analytical form as:

Where D: diameter, FA0: feed rate, CA0: [18F-] initial activity concentration, εA: stoichiometry, xA: conversion rate. In vitro studies showed that [18F]FEONM had higher lipophilicity than that of [18F]FDDNP (log = 2.20 ± 0.17 and 1.93 ± 0.10, respectively [5-7]) and the logP ratio of [18F]FEONM to [18F]FDDNP is 1.14. Thus, the lipophilicity of [18F]FDDNP increases as expected and it gets 38% higher. This is measured with shake-flask gold standard method which is lower than the HPLC measuring result [4,5]. The measured lipophilicity difference between these two methods is about one hundred times, which is very similar to Harmine, FE@SUPPY, DASB, WAY100635 and SNAP-7941 [8] also like the trending of Harmol and FET [8].

Positron Emission Tomography (PET) is a multidisciplinary science. In contrast to CT and MRI, which are structural imaging techniques, PET is based on the characteristics of positron emitterslabeled radiopharmaceuticals and has been applied to study human pathophysiology in vivo non-invasively. In addition, PET has also been applied to monitor the efficacy of therapies, study drug pharmacokinetics (PK) and drug pharmacodynamics (PD).