Infantile hemangiomas are benign fibrovascular tumors of infancy that are characterized by a rapid growth phase with endothelial cell proliferation followed by gradual involution. Eighty percent of hemangioma occurs as single lesion. Only 20% of affected patients will have multiple tumors [1]. They are soft and painless, and often described clinically as a soft tissue mass, smooth or lobulated sessile or pedunculated with variable size. They may be smooth or irregular bulbous in outline [2]. This article describes the case of a 3-month-old boy reported with multiple hemangioma located both in head and neck region and extremities.

A 3-month-old Chinese boy was reported with a history of fever. The ultrasonographic (USG) examination of abdomen and pelvis revealed an ill-defined, hyperechoic lesion in the liver, measuring 3x3cm. The mother had noticed three tiny red spots distributed in nasal tip, left middle finger and right upper extremity respectively at birth, which rapidly proliferated into masses. Local examination revealed the mass located in right upper arm was the largest in size, up to 5*4*3cm3 approximately. The mass located in nasal tip was 1.5*1.5*1.5cm3 in size, and the third mass surrounded the root part of the left middle finger. All the three masses were pink to red in color, rubbery in consistency, slim surface. Especially, the mass located in upper extremity is crust-covered and no effusion (Figure 1). The cutaneous temperatures of lesions were higher than adjacent normal skin. Palpation revealed the tension of the mass surfaces is quite high and a subcutaneous liquefied layer had generated. General examination was normal with no deterioration of health status. A provisional diagnosis of multiple infantile hemangioma was made according to their clinical appearances, the growth behaviors and USG. Hematological routine examination revealed all findings to be normal. The patient was treated with 3 courses of low-dose oral prednisone. The dose was 5mg per kilogram of body weight, q.o.d. and one course of treatment was one month with a slow withdrawal and one following month for gap. After one course of treatment, the size of the three masses shrinked, with the surface of the one located in arm ulcerated then incrusted. In that case the wound was debrided and treated with red LED curing unit. After 3 sessions of debridement and LED treatment (oral prednisone simultaneously), the ulceration started closing and all the three masses softened. Subsequently, USG examination exhibited the minification of the liver lesion to 8mm*7mm. Written informed consent for publication of their clinical details and clinical images was obtained from the parents relative of the patient (Figure 2-4).

Figure 2:The ulceration on the right upper arm during the first course of oral prednisone and the debridement.

Figure 3: The right upper arm lesion after one course of oral prednisone, 3 sessions of debridement and LED treatment. 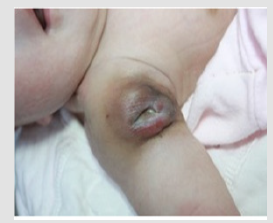 Hemangiomas are the most common benign soft tissue tumor of infancy and childhood, occurring in 12% of all infants and are found in greater frequency in girls, whites, premature infants, twins and are usually born to mothers of higher maternal age. In 80% of all cases, hemangiomas occur as single lesions. As the exact etiology remains unknown, some believe that hemangioma is not a true lesion, but a developmental anomaly or hamartoma instead [3]. The diagnosis of infantile hemangioma is straight forward from the history and clinical examination. Infantile hemangiomas arise during the first 8 weeks of life as an area of discoloration or telangiectasia (red spot in this case). The lesion exhibits a rapid proliferative phase and grows into a raised rubbery bright-red tumor [4]. This is followed by gradual involution and a spontaneous regression by the age of 5-9 years. 50% of all hemangiomas will completely involute by the age of 5 years and 90% by the age of 9 years [4-7]. Meanwhile, 40% of involuted lesions, especially those ulcerated, may either show scaring, wrinkling, telangiectasia, or loose fibro-fatty tissue, which affects the appearance of patient [8].

The literature reveals infantile hemangioma is observed as a multiple lesion, located in head and neck region, extremities and internal organs. Hemangiomas occur most frequently in head and neck region (60%), followed by the trunk (25%) and the extremities (15%), which are grouped into infantile hemangiomas and congenital hemangiomas [9]. Occurrence of IHs with their primary location on both head and neck region and extremities seem very rare. Clinical findings, history and USG result confirm us diagnose. Regarding treatment, we advise infantile hemangiomas with rapid proliferating and ulcerating risk require early intervention, especially combining with internal organ lesions. In the case discussed here, the treatment is comprised of oral prednisone. In the present case, the patient is undergoing follow-up and lesions are apparently involuting. Therefore, practitioners should notice that rapid treatment is essential for IH patients. Furthermore, to ignore the possibility of the intercurrent lesions interfering internal organs, which suggest the administration of systemic drugs, may bring out unexpected outcome.