In Kuwait, the lack of quantitative information and georeferenced data on the extent of degraded lands represents one of the significant challenges facing the development of an action plan for land degradation control. Application of remote sensing and GIS, besides ground truth and intensive field surveys, is a practical and cost-effective tool for mapping and characterization of land degradation. In the present study, the term land degradation hotspots (LDH) is used to characterize areas of different sizes, where the vegetation cover and the soil types are severely degraded. Degradation was caused by excessive human pressure under drought conditions. The past land uses for the majority of the hotspots were rangeland grazing and seasonal recreation activities. The vegetation map [1] indicates that the lands of the hot spots were covered with perennial vegetation. The present study indicates that this perennial vegetation is totally disappeared, and the soils are highly degraded due to destructive land use types. The most common soil degradation processes are soil losses (by both wind and water), soil compaction and sealing and soil mining. Currently, the majority of the hotspots act as anthropogenic sources for sands and dust (through offroad vehicles). Figure 1 Shows the interaction between land use types and the status of vegetation.

Kuwait covers 17,800 km2. It consists of two main ecosystems. These are the terrestrial (about 85%) and the coastal and marine (15%). The harsh environmental conditions of Kuwait (including prolonged drought such as that of 2007 to 2017 besides land misuse and over-exploitation of soils and vegetation are the main driving forces for land degradation. Some 75.1% of the lands of Kuwait is used for grazing activities and desert recreation [2]. During the last three decades, the terrestrial environment in Kuwait was subjected to different mechanisms of land degradation. In August. 1990 - Feb.1991, the country was occupied by Iraqi Troops. Military operations represented by troops transport on the fragile desert sur face, maneuvering and construction of defense lines resulted in severe surface disruption. As stated by Misak 2003, some 6000 Iraqi Tanks & Tracked Vehicles and 5145 Coalition Tanks & Vehicles were moving on the desert of Kuwait. In addition, some 240,000 ground fortifications were established in Kuwait. Between 2007/2008 and 2017/2018 seasons, Kuwait experienced a drought episode. The average annual rainfall during the drought episode fluctuated between 35- and 75-mm. Strong winds with high speed, ranging between 50-60 km/ hour were recorded during the drought episode. As indicated in a huge number of publications, e.g., Omar et al. [1] Khalaf et al. [3] and Misak et al. [4], one of the main consequences of drought is the deterioration of vegetation cover.

Figure 1: The interaction between land use types and land degradation (three cases). 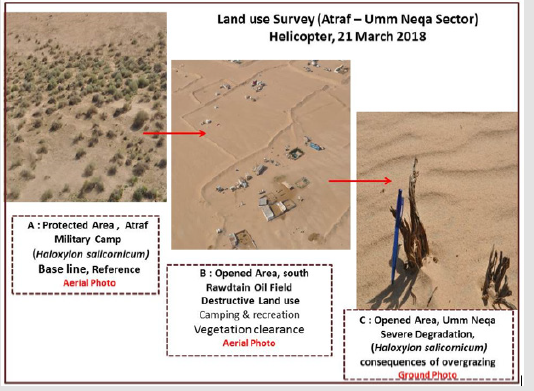 Omar et al. [1] mapped eight major vegetation units in the terrestrial environment of Kuwait. The vegetation map was prepared by integrating the soil and vegetation information on a Geographic Information System (GIS). The vegetation units are: Haloxyletum (22.70 %), Rhanterietum (2.10%), Cyperetum (26.90%), Stipagrastietum (39.30%), Zygophylletum (0.30%), Centropodietum (1%), Panicetum (0.70%) and Halophyletum (1.90%). The mentioned vegetation map was used as a baseline for comparison with the conditions of the year 2017. Justifications for selecting this map as a baseline include:

b) Some 8351 observation points were assessed for vegetation cover and soils.

On the other side, eight soil units were mapped by KISR1999. These soil units are: Aquisalids (7%), Calcigypsids (6%), Haplocalcids (8 %), Haplogypsids (0.05%), Petrocalcids (11 %), Petrogypsids (33%), Torriorthent (0.08%) and Torripsamments (27%). In Kuwait, land degradation directly affects economic and biological productivity as well as public health. The majority of the early studies on land degradation were focused on symptoms and causes of land degradation which are mainly related to socioeconomic conditions and natural factors. Mapping land degradation in Kuwait was not tackled in previous studies.

Reversing the processes of land degradation through serious and sustainable control measures, as well as appropriate land use planning are the most significant challenges facing the real development of the terrestrial environment of Kuwait. The current study indicates that the total length of off-road vehicles is around 14,774.67 Km ( 0.98 Km/Km2 ) of terrain environment of Kuwait Figure 2. As indicated from Figure 2, the off-road vehicles result in surface disruption for all land use types including protected areas (about 18 % of the country) and rangeland grazing (close to 51 % of the country). In addition, the off-road vehicles dissect all geomorphological units including sand dunes, playas, dry wadis, and hilly terrain Figure 3. shows the disruption caused by off-road vehicles. The goal of this study is to identify and characterize the land degradation hotspots (LDH) in the terrestrial environment of Kuwait and to discuss the interaction between land use types and the status of vegetation cover and soils types. 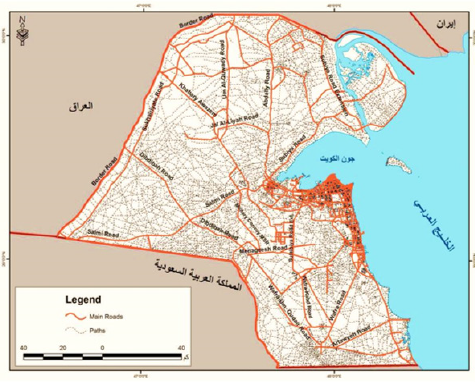 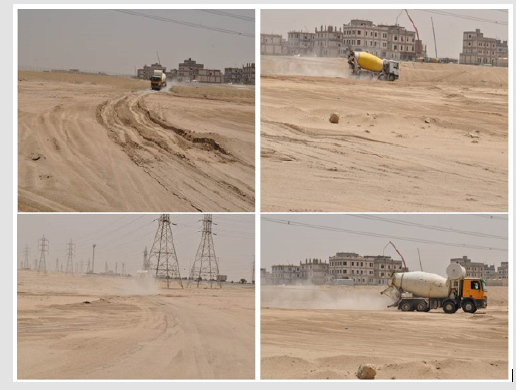 This study aims to detect and identify the land degradation hotspots (LDH). For this purpose, a low spatial resolution satellite image (Landsat 8, 25 September 2017, 15 m resolution) was used for the detection and delineation of hotspots and the analytical potential of GIS was effectively used to produce the final analysis and design in the form of maps. The primary data was collected from the entire study area and has been identified the locations of the degraded areas using the global positioning system (GPS) with extreme precision (latitude and longitude coordinates) and was saved in the system as a layer. For identification of hot spots using remote sensing, some observable ground objects were delineated. These include large trucks, water tankers, caravans, water wells, livestock sheds, portable livestock shelters and stores of animal feeds.

These objects which represent the tools for camping and grazing in the desert appear as black dots on the satellite image; therefore, the areas where the black dots appear on satellite image densely and confirmed by field survey are defined as hotspots where the soil and vegetation cover in these areas were subjected to severe deterioration due to human actions. The (ArcGIS S/W 10.5) was used in the current study to integrate the information of ground truth and satellite image to create a hotspots map. Three GIS map layers were overlayed on the hotspots map. These are offroad vehicles, soil types, and vegetation cover (Figures 4, 8 & 9) respictively. These maps gave answers to many questions related to the extent of deterioration and its causes in the study area, and the economic, environmental and social impact on the Kuwaiti environment, then to determine the control measurements by the decision makers to mitigate and reduce this deterioration. 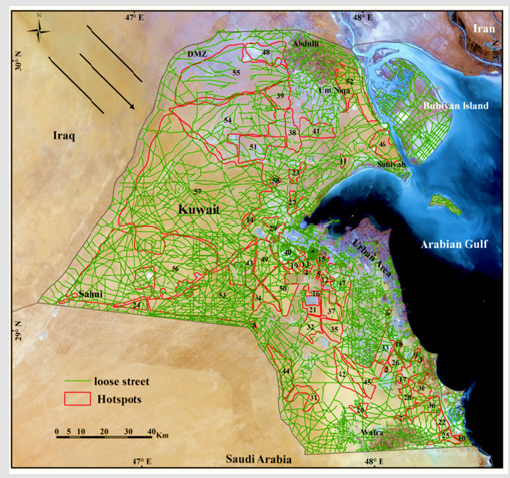 During November 2017 – March 2018, seven field trips were arranged to several areas in the Terrestrial Environment of Kuwait. On 21 March 2018, an exploratory survey using low altitude of the low-speed helicopter was arranged to the northeastern part of Kuwait (16 % of the country). The purpose of this reconnaissance survey was to get information on current land uses. During the ground field trips, 25 observation points (O1 - O25) and 19 control sites (C1-C19) were selected, Figure 5. shows the locations of the observation points and control sites. The 19 control sites are located in protected areas (including the Demilitarized Zone between Iraq and Kuwait). So they were used as a reference for the original healthy vegetation which is protected for at last two decades. The field survey for land degradation indicators of the hot spots was based on visual field evidence (Table 1). 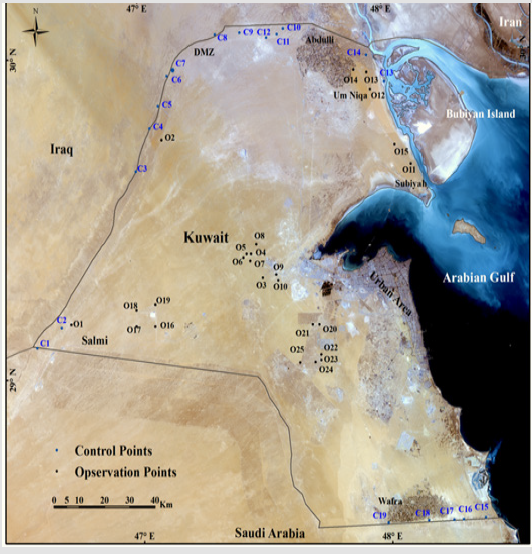 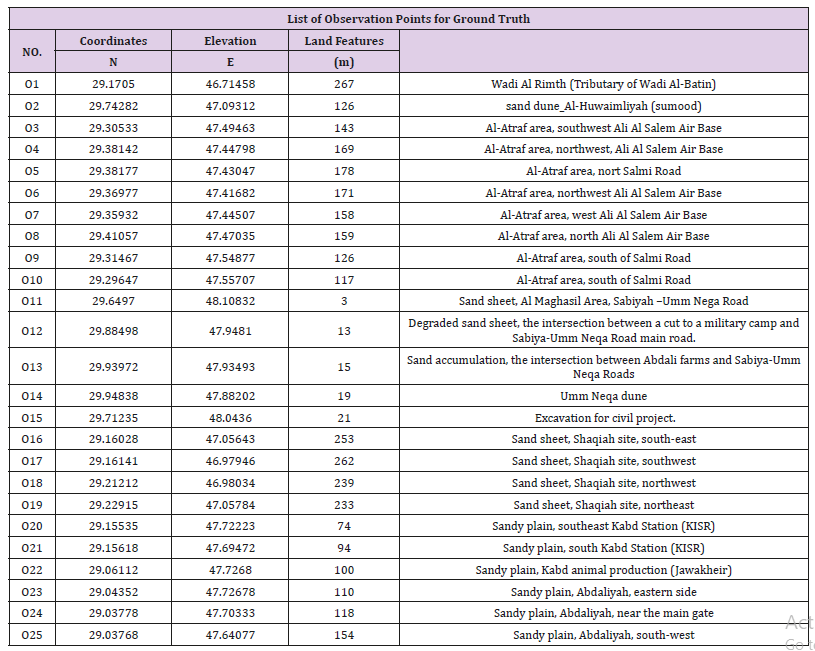 In general, the common characteristics of the majority of the 58 hotspots are:

a) Almost 100% vegetation degradation and loss of biodiversity

f) Gullies and rills which indicate soil loss by runoff water These hot spots with a total area of 7590.3 K are delineated Figure 7. The study reveals a significant variation in the areas of the hot spots, ranging from about 2000 km2 (hot spot 57) to 1.2 km2(hot spot 1) with average 132.9 Km2. Based on their areas, the hot spots are categorized into five classes. These are: (Table 3).

Figure 6:Degradation of Haloxylon salicornicum , hot spot no 52, the northeastern part of Kuwait. Note the difference in grain size and the active sand sheets (November 2017-March 2018). 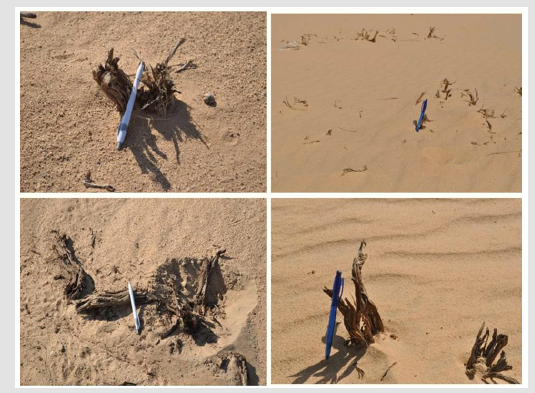 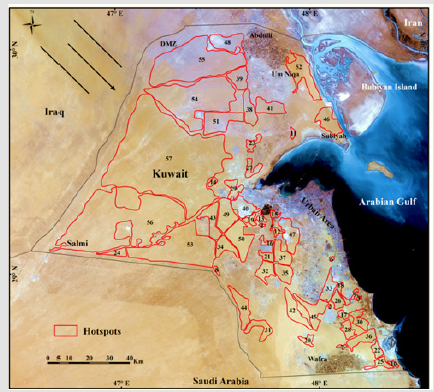 Table 3: Basic information on the hotspots in Kuwait. 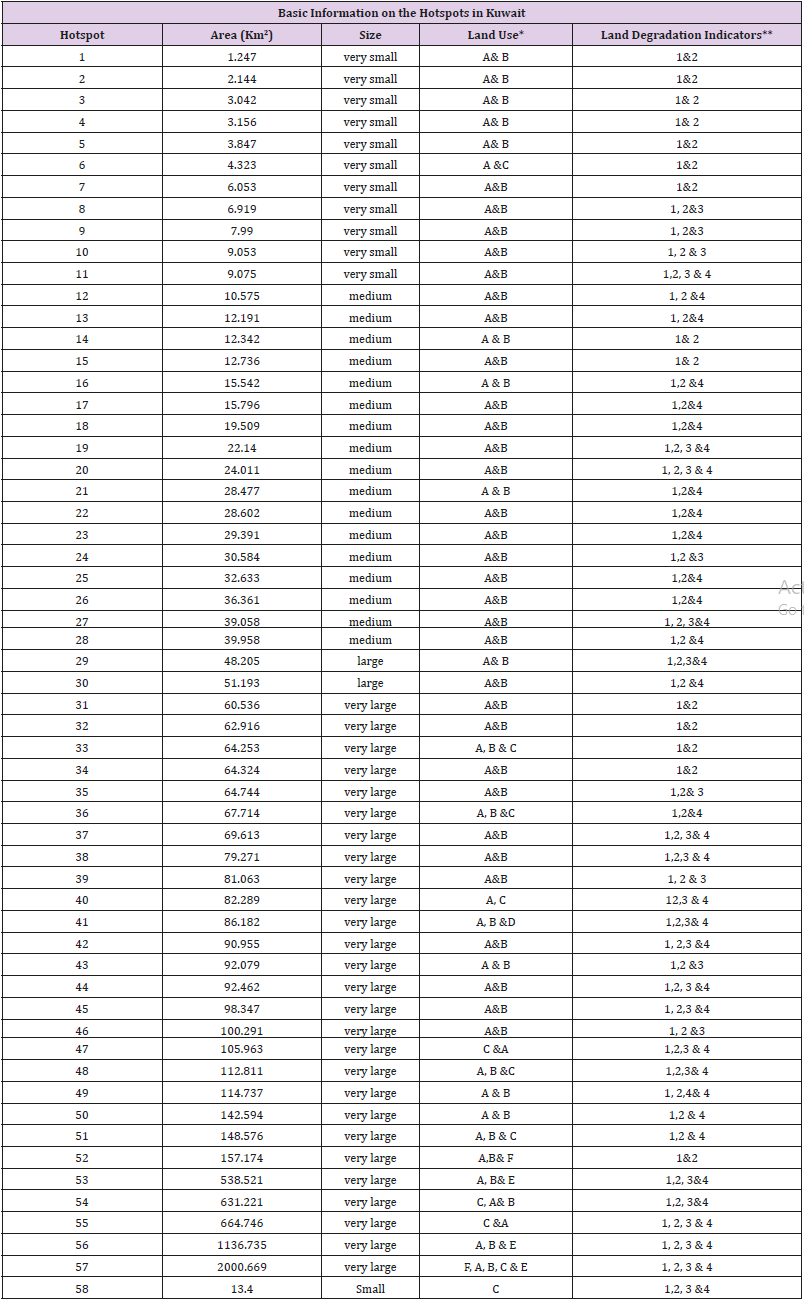 Large and very large hot spots are distributed in the northern and western parts of the country. Coalescence of two or more small to medium hot spots results in large to huge spots (in the case of northern and western parts of Kuwait. Table 3 brief on the land use and land degradation indicators for the 58 hotspots. Rangeland grazing and encampment comprises 98% of land uses of the hotspots, Both the land uses are connected to each other. These main land uses were mainly concentrated in the hotspots 1 to 57 which covers a total area of 7575.9 km2. Hotspot 58 that covered an area of 13.4 km2 recorded no indicators of rangeland grazing and encampment due to this hot spot is located in a protected area where these activity is prohibited. As for the land degradation indicators such as vegetation deterioration, and soil losses (both by wind and water) were recorded in all the 58 hot spots (Table 3) [17-28].

The results of the present study indicate that the area of soil degradation is 7590.3 Km2 (47% of the terrestrial environment) ( Figure 8) and (Table 4). 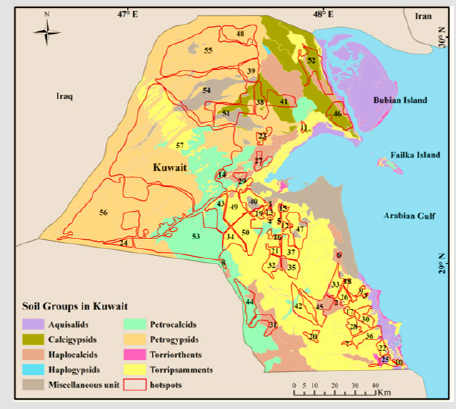 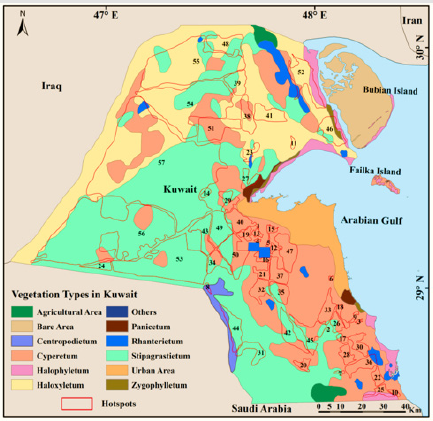 Land Degradation Neutrality (LDN) in arid, semi-arid and dry sub-humid areas is a state whereby the amount of healthy land resources remains stable or increases within specified temporal and spatial scales (UNCCD, 2014). Based on analyses of information on the nature, extent, and magnitude of land degradation in the terrestrial ecosystem of Kuwait, a strategic LDN target is defined. It aims to reduce land degradation from 50 % in the year 2019 to 10-15 % in the year 2030. A twelve-year roadmap (2019-2030) is proposed. It consists of four programs:

Vegetation and soil degradation affects about 50% of the terrestrial environment of Kuwait which covers about 15.130 km2 (85 % of Kuwait). The main objective of this study was to detect and assess degraded areas in the terrestrial environment of Kuwait. A qualitative and quantitative approach was adopted through integrating remote sensing (Landsat 8, September 2017), Geographic Information System (ArcGIS S/W 10.5) and field investigations. The vegetation map [1] showing eight vegetation units was used as a baseline data for comparison with the vegetation conditions of the year 2017. On the other side, the soil map (KISR, 1999) showing eight soil units was used as a reference for comparison with the soil conditions of the year 2017. The study mapped and characterized some 58 land degradation hotspots with a total area of about 7590.3 Km2. Significant variations were observed concerning the sizes, land use and land degradation indicators of the 58 hot spots. Seven land use types were recorded. The most significant of which were rangelands grazing, encampment (temporary accommodation in the desert), military maneuvers and quarries and landfills.

Four mainland degradation indicators were reported. These are vegetation degradation & loss of biodiversity, soil losses (both by wind and water), soil crusting, sealing and compaction & soil mining. It is indicated that for 98 % of the hot spots, rangelands grazing and encampment are the main land uses. Both land uses are connected to each other. They were recorded in hotspots 1-57 (7,576.9 4 km2 ). The only hot spot where no rangeland grazing, is hot spot 58 (13.4 km2).Concerning land degradation indicators, vegetation degradation and soil losses (both by wind and water) were recorded in the 58 hot spots. Currently, most of the hotspots act as anthropogenic sources for sand and dust. Compared to the baseline data, some 48.7% of the vegetation and 47% of the soils were degraded during the period between 2001 to 2017. it is strongly recommended to develop a 12-year roadmap (2019- 2030) to reverse land degradation.

Deep thanks and appreciations to Engineer Ahmad Othman, GIS Section, KISR for providing recent satellite image and his valuable comments.