Scallop shells are waste products of scallop harvesting in district of Korea and Japan. Large numbers of shells are heaped near the seaside, creating problems such as offensive odors and soil pollution from heavy metals contained in the viscera. Therefore, new applications for scallop shells need to be developed. Scallop shells contains calcium carbonate (CaCO3) as the main component, when scallop shells are heated to >700OC is converted to calcium oxide (CaO). Heated scallop shell powder (HSSP) exhibits strong antimicrobial activity to the vegetative bacteria, spores and fungi. CaO has been utilized mainly as an acidity regular and food additive [1-5] (Figure 1). In the present study, we evaluated the bactericidal activity of scallop shell powder against methicillin resistant Staphylococci spp extended-spectrum beta-lactamase (ESBL) positive Escherichia coli and Klebsiella pneumoniae isolates obtained from hospitalized patients in the coronary and surgical intensive care units (ICUs). 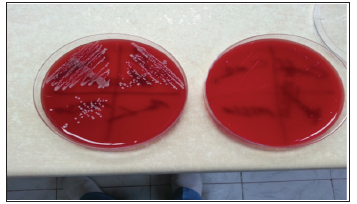 We investigated 50 methicillin resistant Staphylococci species [25 S. aureus and 25 coagulase negative staphylococci (CNS)], 30 E. coli and 20 K. pneumoniae isolates by microdilution method. The microdilution method recommended by the Clinical and Laboratory Standard Institute (CLSI) for antibiotic susceptibility testing was modified and applied for scallop shell powder (SSP). We have obtained to scallop shell powder commercially. Scallop shell powder of the 1% solution was prepared and sterile saline (0.85%) was used for preparing this disinfectant solution. Its PH level was close to neutral (PH=6.54) and low level of mineral content. After the disinfectant solution was freshly prepared, its pH measurement was made by a Selecta Digital PH meter at 250C as a standard. Scallop shell powder solution PH was 9.14.

All wells except the first wells of microplates containing 12 wells in one row were placed 100μl Mueller Hinton Broth (MHB) (Oxoid, UK). 200μl was added from the substance solution to be tested in the first well of each well and transferred to the second well of 100μl from there and the process was continued until the well was pushed out 100μl from the 11th well. So that serial dilutions were made at concentrations two fold dilutions for scallop shell powder. The suspension was prepared at a concentration of 0.5 McFarland in 24 hour bacterial cultures for the bacterial inoculum and diluted 10 times with sterile saline (0.85%). We added to all wells except for 11th well in the diluent series for each 5μl of bacteria from these suspensions. In the 11th well used as a control are only the MHB and scallop shell powder, and in the 12th well only the MHB and bacteria were present. All wells except the first and 12th wells of microplates containing 12 wells in one row were placed 100μl. All microplates were incubated at 35°C for 24 hours. The highest concentration at which the bacterial reproduction is not observed (lowest concentration of solution) was detected. S. aureus ATCC 29213, E. coli ATCC 25922 and K. pneumoniae BCC 1395 were used as control strains.

Table 1: No of strains at scallop shell powder concentation μl/ml.

Scallop is one of the major marine products in Hokkaido, Japan. As a result, about 300.000 tons per year of scallop shells are generated as industrial waste in this region of Japan alone. The scallop shells contain CaCO3 (98-99%) as the main component, and 1-2% organic compounds. Also, CaCO3 is a very cheap material. By heat treatment, CaCO3 is converted to CaO which exhibited strong antibacterial activity, a food supplement and an adsorbent of formaldehyde [1-3,6,7]. The authors have previously studied the activity of ceramic powders on the growth of bacteria and twenty six kinds of ceramic powders, such as metallic oxide and carbide, were investigated for their antibacterial effect and of these ten kinds of powders found to inhibit bacterial growth. CaO, in particular, exhibited strong antibacterial and antifungal action against a broad range of microorganisms [8-11]. However, there have been a lot of studies on the bactericidal effect of heated scallop shell powders on foodborne pathogenic bacteria [1-7,11-21].

Prevention of fungal contamination indoors and removal of VOCs by mixing antimicrobial substances into wall materials or paints may contribute to a safe living environment. With an aging society and an trend toward an increase in chemical allergies, many applications exist for heated shell powder Sawai et al. [1,2,9-15] investigated in the a lot of studies, scallop shell powder heated at 700oC or higher exhibited antibacterial activity against several foodborne pathogens, including S. aureus, E. coli O157:H7, L. monocytogenes, Bacillus subtilis and Salmonella typhimurium. They reported the bactericidal effect of scallop shell powder on foodborne pathogenic microorganisms. Bae et al. [3] found the CaO solutions should be used within 24 hour for the greatest bactericidal action against foodborne pathogenic bacteria. Cagri-Mehmetoglu [4] showed that L. monocytogenes or Salmonella enteritidis present on the surface of chicken wings could be decreased significantly by immersion of the wings in scallop shell powder. Jung et al. [16] investigated the bactercidal effect of CaO to Pseudomonas aeruginosa biofilms on quail eggshells and major egg contacting surfaces (stainless steel, plastic, and rubber). They reported that scallop shell powder was highly effective to reduce the number of bacteria and the amount of biofilm reduction on different surfaces and therefore, it can be used as an action bactericidal agent on P. aeruginosa biofilms in quail eggs and eggs contact surface material.

Asada et al. [18] evaluated the bactericidal effect of calcium oxide and calcined shell calcium to Legionella pneumophila in water samples taken from the cooling tower of a prefabricated houses. They obtained that calcium oxide and calcined shell calcium were effective to reduce bacteria numbers. They also have exhibited antimicrobial effect through heat treatment. Both of them were equally effect to L. pneumophila. Legionella species are common in the natural environments (i.e. soil, lakes, rivers). Since natural city water can pass to mains water, it can be used in artificial water systems; may settle and multiply in water tanks of buildings, airconditioner system cooling towers, stagnant areas of building water system, biofilm in piping. At present, chlorination, heating, ozone or UV light have been used in the disinfection of Legionella species.

Bodur et al. [5,6] conducted with scallop powder, it was reported that the L. monocytogenes, S. aureus and E. coli bacterial load was reduced. They indicated that bacteriostatic effect of calcium oxide results from the changes in PH level. Also, it is suggested that, in other mechanism, hydroxyl ions show a strong free radical effect and reacts with some biomolecules. Bacterial membrane functions such as the maintenance of cell integrity, substrate transport, the activities of the membrane-associated enzymes and are based on membrane fluidity. It is likely that the membrane fluidity will be affected by the temperature increase. When the temperature of the cells is above a critical level, a gel-liquid crystalline phase transition of the membrane phospholipids should occur. Therefore, membrane fluidity may affect the bactericidal action of the shell powder. The phase transition of the cell membrane induces a change in conformation of charged molecules, such as proteins on the surfaces of cells, which causes a variation in the interaction between the cells and shell powder. Also, the permeability of the membrane might vary due to changes in membrane fluidity. Although there is no study concerning S. aureus, it was considered that similar changes in the membrane might occur. An alkaline effect caused by the hydration of CaO is considered to be one of the primary mechanisms of bactericidal action in the shell powder slurry [1].

Nosocomial infections are frequently associated with drug resistant microorganisms, including methicillin resistant S. aureus and extended spectrum beta-lactamase (ESBL) producing Gram negative bacteria, which can pose considerable thearapeutic problem. The advent of ESBL procedures has represented a great threat to the use of many classes of antibiotics, particularly cephalosporins [30]. In our study, the minimal inhibitory concentration (MIC) values were determinated as the lowest concentration of antimicrobial agent that completely inhibits growth of the microorganism and the antimicrobial activity was evaluated using microdilution method. Scallop shell powder was the most effective to methicillin resistant Staphylococci spp. (S. aureus and coagulase negative staphylococci) and also, effective K. pneumoniae and E. coli (all of ESBL positive) isolated from patients coronary and surgical intensive care units. Alkaline effects caused by the hydration of calcium oxide are considered one of the primary mechanisms of the antimicrobial action of heated scallop shell powder [2].

The authors thank Koksal Gultekin for research studies in the laboratory.