Sjögren’s syndrome is a systemic immune disease with impaired secretion of salivary glands; thus, it may cause inconvenience in patients’ daily lives. Pilocarpine is a non-selective muscarinic receptor agonist used to treat dry mouth. This single-arm intervention, post-market surveillance study evaluated the safety of pilocarpine (Salicret, Meider Pharmaceutical Co., Ltd.) for treating Sjögren’s syndrome. We recruited 135 patients with Sjögren’s syndrome who received pilocarpine orally four times daily at a dose of 5 mg for 24 weeks. Forty-one (31.3%) of 131 patients experienced at least one adverse event (AE), and of those, 37 patients’ (28.2%) AEs were associated with the study treatment. The most common drug-related AEs were sweating in 14 patients (10.7%) and palpitation in 9 (6.9%). No serious AEs occurred during the study period. Therefore, pilocarpine therapy is considered effective, safe, and well tolerated in patients with Sjögren’s syndrome.

The functions of saliva include lubricating the mouth, aiding in the digestion process, and possessing antimicrobial functions [1]. Xerostomia is dryness of the mouth that may be associated with a change in the composition of saliva or reduced salivary flow [2]. Dehydration, malfunction of the salivary glands, or radiotherapy of the area of the salivary glands can cause xerostomia. The general symptoms of xerostomia include a persistent oral burning sensation, eating difficulties, diminution in taste acuity, discomfort speaking, recurrent mucosal infections, greater periodontal disease, and denture intolerance [3]. Xerostomia affects the mechanical process of providing moisture and lubricating the mouth with saliva, and the chemical, antimicrobial, remineralizing, and buffering functions of saliva [4]. A reduction in salivation is paralleled by a shift to highly cariogenic microflora at the expense of non-cariogenic organisms [5]. Therefore, saliva plays important roles in protecting the oral cavity. Sjögren’s syndrome is one of the causes of xerostomia with destructive salivary and lacrimal glands due to abnormal infiltration of lymphocytes [6]. The attack on these exocrine glands may lead to the development of xerostomia and keratoconjunctivitis sicca.

The clinical symptoms including dryness of the mouth and eyes, fatigue, and joint pain are usually found in 80% of patients with Sjögren’s syndrome [13]. To date, neither a cure for Sjögren’s syndrome nor a specific treatment is known to permanently restore gland secretion. Instead, treatment is generally symptomatic and supportive. Adequate immunotherapy may improve the systemic symptoms of Sjögren’s syndrome, including arthritis, pain, interstitial pulmonary fibrosis, and neuropathy [10], but immunotherapy has no adequate response for the symptoms of dry mouth or dry eye [14]. However, prescription drugs including cevimeline and pilocarpine are available to help stimulate salivary flow [10,13,15]. Pilocarpine is a cholinergic parasympathomimetic alkaloid originally extracted from Jaborandi (Pilocarpus microphyllus) [16]. It is a non-selective muscarinic receptor agonist. Its pharmacological actions can stimulate exocrine glands and result in diaphoresis, salivation, lacrimation, and gastric and pancreatic secretion. Pilocarpine can provide clinically significant symptomatic relief to patients with xerostomia [17,18]. Pilocarpine has been approved for the treatment of xerostomia resulting from radiation damage to salivary glands and from Sjögren’s syndrome [10,17]. We aimed to evaluate the safety of oral pilocarpine (Salicret, Meider Pharmaceutical Co., Ltd.) for treating patients with Sjögren’s syndrome.

The study medication was taken orally four times daily (QID) for 24 weeks. Inclusion criteria were men or women aged ≥20 years, those diagnosed as having primary or secondary Sjögren’s syndrome in accordance with the 2002 revised European criteria, those who agreed to use medically acceptable and adequate contraceptive methods throughout the study, and those who were reliable, cooperative, and likely to be compliant with study procedures, in the investigator’s opinion. Exclusion criteria were intolerance to pilocarpine; a history of uncontrolled asthma, chronic bronchitis, and chronic obstructive pulmonary disease; history of an uncontrolled cardiovascular disease; history of a renal or hepatic disease; and history or current treatment with β-blockers, tricyclic antidepressants, and cholinergic para-sympathomimetic agents other than the study medication.

Patients were checked for eligibility and introduced to the study if their eligibility was confirmed. Patients were given an informed consent form (ICF) to read and understand the study, and they decided independently whether to participate. Once the ICF was signed, patients were enrolled in the study, and they underwent baseline safety measurements, including physical examinations, 12-lead electrocardiography, and assessment of vital signs and body weight. Patients’ medical history and previous medications were recorded, and a urine pregnancy test was performed for women of child-bearing age. First Returning Visit (Visit 2: Week 12, ±7 days) and Second Returning Visit (Visit 3: week 24, ±7 days)Patients returned for the safety evaluation and assessment of adverse events (AEs) after 12 and 24 weeks of treatment. Laboratory tests were performed at the investigator’s discretion when an AE or suspected AE was noted. All AEs and concomitant medications from the previous visit were documented. The flow chart of the study is shown in Table 1.

Table 1: Flow chart of the study. 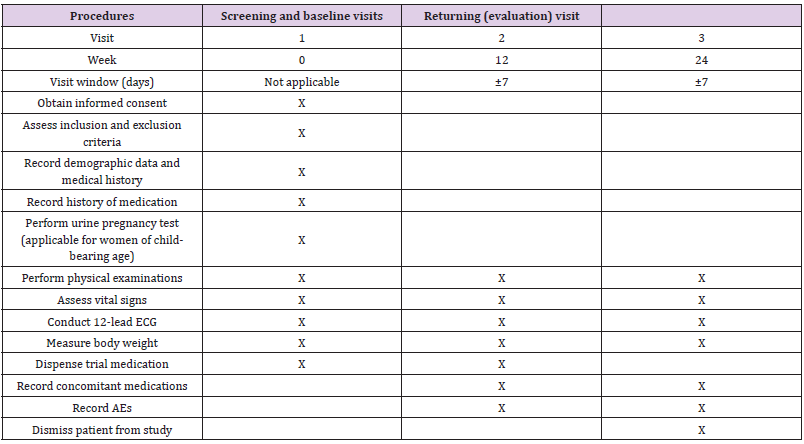 One hundred thirty-five patients were enrolled in this study. Based on the most updated version of the protocol, we planned to enroll 160 patients with an expected safety-evaluable population of 80% to have at least 128 patients for safety analysis. Four patients who did not return for a visit were excluded from the safety analysis; ultimately, 131 patients were included in our safety population. Thirty-nine of 135 patients (28.9%) withdrew from the study, including 19 patients (14.1%) because of an unacceptable AE and 20 (14.8%) who withdrew voluntarily. The study population was comprised of 8 men (6.1%) and 123 women (93.9%). Patients’ average age was 59.0 years (range 21.3-87.2 years). All patients had ocular and oral symptoms at study entry and fulfilled at least four of the six classification criteria of Sjögren’s syndrome. Most patients (93.1%) were diagnosed as having primary Sjögren’s syndrome. All patients’ characteristics are shown in Table 2.

The analysis of safety assessments was performed based on the patients who received at least one dose of study treatment with at least one safety evaluation after receiving study treatment. Overall, 50 AEs were observed in 41 patients (31.3%), and 45 drug-related AEs were observed in 37 patients (28.2%) during the study period. The numbers of one or more AEs by severity are presented in Table 3. The most common AEs observed were sweating (including general sweating, night sweating, cold sweating, and severe sweating) (10.7%) and palpitation (7.6%). Other drug-related AEs commonly reported in our patients included diarrhea (3.1%), dizziness (3.1%), nausea/sensation of nausea (2.3%), epigastric irritation/ epigastric discomfort/stomach pain (2.3%), and headache (1.5%). Most drug-related AEs were mild to moderate in severity, except severe sweating occurred in one patient. No serious adverse events (SAEs) occurred during the study period.

Table 3: Number of subjects with one or more adverse events by severity. 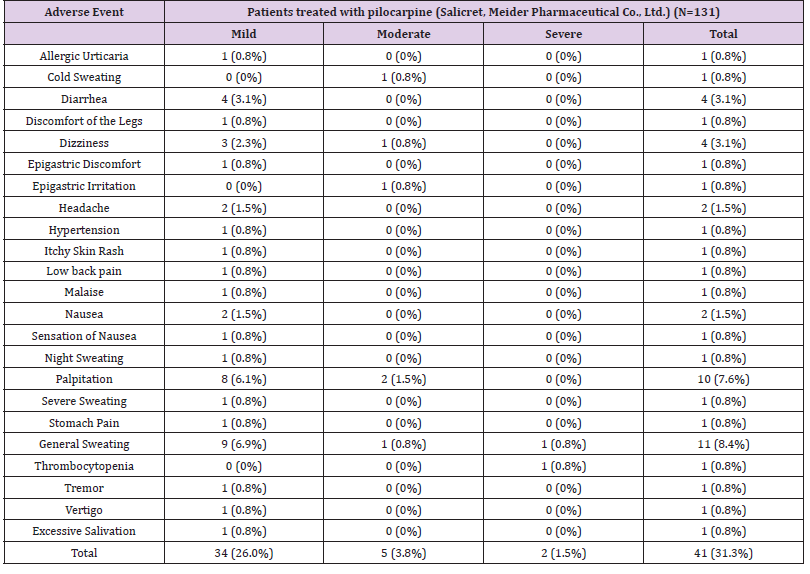 Effect of Blood Pressure and Arrhythmia after Pilocarpine Therapy

The clinical effects of pilocarpine have been proven in many studies. Our study demonstrated the safety of pilocarpine for treating patients with Sjögren’s syndrome. No SAEs were observed in this study. Although the single-arm post-marketing surveillance design limited the strength of the evidence, the data of 131 patients indicated the treatment benefits of pilocarpine in patients with Sjögren’s syndrome. Sweating is the most common AE associated with pilocarpine treatment, and it could be the main reason for withdrawal from the study [17,19-21]. In a fixed-dose trial, sweating was reported in 43% of the patients during the 12-week treatment period [20]. In a dose-titration study, pilocarpine was administered at a dose of 5 mg QID for 6 weeks and then increased to 7.5 mg QID for 6 weeks; sweating occurred in 64% of patients receiving pilocarpine treatment compared to 7% in the placebo group [22]. In a study conducted in the National Taiwan University Hospital, 5 patients (21.7%) in the pilocarpine group experienced sweating, and 3 of them withdrew from the study [19]. A stepup dosing study in Japan found that 39.3% of subjects receiving pilocarpine experienced sweating [23]. Adequate patient education for sweating may be important for improving patient compliance after pilocarpine treatment.

The second common AE reported in our study was palpitation. Despite the higher rate of palpitation recorded in our study, the physical examinations and 12-lead electrocardiography did not detect any clinically relevant abnormality in patients with palpitation. The AEs of pilocarpine decreased over time. The frequency of AEs due to pilocarpine treatment may be reduced by starting with a low dose (e.g., 5 mg once or twice daily), and then increasing the dose gradually until the maintenance dose of 5 mg QID is achieved. According to a previous study, gastrointestinal adverse events caused by pilocarpine treatment tended to decrease over time, but not for sweating [23]. The dosing frequency used in our study ranged from once daily to QID. Among the 14 patients who experienced sweating in our study, 8 continued study treatment. The symptom lasted for more than 1 month in all 8 patients. The AE of sweating might have been tolerable for at least half of our patients. Pilocarpine acts like muscarinic cholinergic receptors found throughout the body and promotes fluid secretion. The salivary glands are stimulated, and the production of all the body’s exocrine glands is increased. In contrast to pilocarpine, another drug for xerostomia called cevimeline has a high affinity for specific muscarinic receptors (M3) located in lachrymal and salivary gland epithelia. Ramos-Casals et al. reviewed controlled trials on drug therapy for primary Sjögren’s syndrome and found four placebocontrolled trials that evaluated oral cevimeline in 376 patients [15].

The largest trial showed that 18% and 21% of subjects receiving cevimeline (30 mg three times daily) experienced sweating and nausea, respectively, and the second largest trial showed respective AE rates of 16% and 20% [15]. Although the treatment periods of these two studies (12 and 6 weeks) were much shorter than ours, the frequency of sweating in each trial was higher than that observed in our study. The third trial showed that 28% of subjects receiving cevimeline (30 mg three times daily) experienced diarrhea, and the last one reported that 14% of subjects had sweating, 19% had gastrointestinal side effects, and 24% had palpitation. These findings showed that gastrointestinal AEs were more prevalent in patients receiving cevimeline treatment than in those receiving pilocarpine treatments. Although the incidence of sweating was low in our study, some authors found that sweating was experienced more frequently with pilocarpine than with cevimeline [24]. Based on the assumption of the distinctive safety profiles between pilocarpine and cevimeline, the eligible subjects in the Japanese study were divided into four groups, with two groups receiving pilocarpine first and then cevimeline and vice versa. The frequencies of AEs including digestive symptoms and increased sweating decreased significantly in those two groups [23]. Thus, prescribing either pilocarpine or cevimeline is beneficial to patients with Sjögren’s syndrome. However, patients must be warned of the potential AEs before receiving treatment with pilocarpine or cevimeline.

The most common AEs associated with pilocarpine treatment were sweating, palpitation, diarrhea, dizziness, nausea, epigastric discomfort, and headache. No serious AEs occurred during the study period. The safety profile observed herein may serve to remind clinical physicians of the essentials of appropriate patient education and monitoring. Pilocarpine therapy is safe, and it may be well tolerated by patients with Sjögren’s syndrome.

This study was supported by the Taichung Armed-Forces General Hospital (grant number 107A7).