A thiolated DAB dendrimer has been employed to bond gold nanoparticles of several sizes in order to obtain an electrocatalytic framework for the covalent immobilization and direct electrochemistry of horseradish peroxidase (HRP). This biosensor must represent the basis for developing a lot of oxidase-peroxidase bienzymatic biosensors and heavy metals biosensors based on the HRP inhibition. The kinetic study of the modified electrodes showed that the 5 nm and 16 nm gold nanoparticles are the most efficient to contact with the HRP active centre and the optimized biosensor allow to measure hydrogen peroxide at -0.3 V applied potential in linear ranges of 1-5000 and 1-140 or 140-5000 respectively with high sensitivities of 418.6 and 266.3A mM-1 cm-2 respectively too with low detection limits of 5 and 9 nM and fast response. The obtained apparent Michaelis-Menten constants, were 0.16 and 0.84 mM respectively. Both are significantly lower than the intrinsic K´M revealing the very high enzymatic efficiency of the developed devices.

HRP is widely used in hydrogen peroxide amperometric biosensors of 2nd and 3rd [1-5] generations because the possibility of stablish direct electrochemistry with the electrode material. The H2O2 is a by-product of a lot of oxidase enzymatic reactions, consequently has great interest for sensing in pharmaceutical or industrial processes as well as in clinical, food or environmental analysis. Also, heavy metal ions inhibit the activity of HRP and therefore the HRP biosensors can act as inhibition-based biosensor for the determination of heavy metals [6,7]. In order to develop 3rd generation´s biosensors, three-dimensional nanoparticle materials as gold nanoparticles (AuNPs), constitutes a favourable surface for the immobilization of biomolecules because maintain their biological activity and favouring longer stability and higher reproducibility [8] by their ability to form S-Au bonds with the thiol and amine groups. Moreover, due to their nanometric size, AuNPs confine the enzymes in the proper orientation onto the electrode surface, acting as nanoelectrodes.On the other hand, The dendrimers combine the physical and chemical desired properties with tuneable solubility and surface reactivity. In order to conform the assembled layers, a thiol-functionalized dendrimer has been used to form S-bonds with the AuNPs. In this work, we present the kinetic and analytical characterization of a new sensitive DAB-S-AuNPs-HRP peroxide biosensor with the intention of develop the basis of different bienzymatic oxidase-peroxidase or inhibition biosensors.

The DAB-SH dendrimer (Figure 1) has sixty-four thiol terminal units and was synthesized as previously described [9]. Horseradish peroxidase (HRP, 222 units mg−1), colloidal gold nanoparticles (Auc) (5 nm diameter) and HAuCl4.3H2O were purchased from Sigma-Aldrich. K3Fe(CN)6, K2Fe(CN)6, Na3citrate and other chemicals were analytical grade and were used without further purification. The hydrogen peroxide solutions were previously normalized by the permanganate titration method. Ultrapure water was used for all the pourposes. Auc with diameters of 16 nm and 41 nm were synthesized according to the Turkevich method [10], based in citrate as reductor, (0.5 or 0.25 ml of 1% sodium citrate solution were added to 50 ml of a stirred boiling aqueous solution containing 0.5 ml of 1% HAuCl4 to obtain 16 nm and 41 nm sizes, respectively). 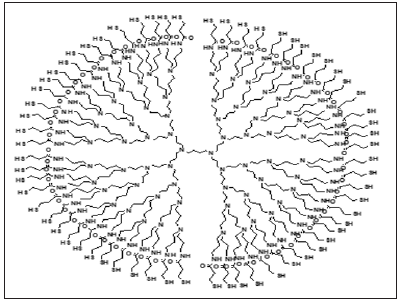 The GC disk electrodes were polished using 0.1 μm of alumina powder and rinsed in ultrapure water in an ultrasonic bath. In order to achieve the anchorage of SH groups to the electrode surface, a first layer of AuNPs were electrodeposited on the GC bare electrode by nine potential cycles between 0.2 and −0.4 V vs SCE in a 10 mM HAuCl4 deaerated solution at scan rate of 0.02 V s−1. Next 0.8 μl of a solution of the dendrimer (approximately 10-4 mM) in 60% sodium hydroxide was dropped onto the AuNPs-electrode surface and maintained for 3 hours at room temperature. Next, the S-DAB/AuNPs/GC electrode was dipped in the corresponding Auc suspension for 15 hours and washed with phosphate buffer pH 7 and ultrapure water.

The enzyme immobilization was carried out by dipping the modified electrodes in a 1.0 mg mL−1 of HRP solution in the phosphate buffer pH 7.0 at room temperature for 4 hours. The biosensors were rinsed with the phosphate buffer and preserved in the buffer solution at 4◦C when not in use. All electrochemical measurements were carried out using an Ecochemie BV Autolab PGSTAT 12. The experiments were performed in a conventional three-electrode cell at 20–21◦C with a GC disk of 3 mm diameter as working electrode, a Pt wire as auxiliary electrode and a saturated Calomel (SCE) as reference electrode. In the steady-state measurements, an Autolab rotating-disc electrode was used. 0.01 M phosphate buffer pH 7.0 was used as supporting electrolyte.

Figure 2 shows the voltammetric profile of the modified electrode before and after the enzyme immobilization. As can be see, a quasi-reversible redox system with Ea = 0.225 V and Ec = 0.185 V related to the oxide formation and reduction on the Auc surface appears after the assembly of the Auc to dendrimer`s thiol groups [11]. This quasi-reversible system allow us to study the kinetics of electrodes modified with the three Auc sizes applying the Laviron model [12], based in the variation of the anodic and cathodic peak potentials with the scan rate. Cyclic voltammograms of modified electrodes show an increase of the peak potential difference, ΔEp, as the sweep rate increases, indicating certain charge transfer kinetics limitation. The homogeneous rate constants ks were calculated in agreement with the Laviron’s model from the supplied data for ΔEp < 200/n mV with polynomial fit: 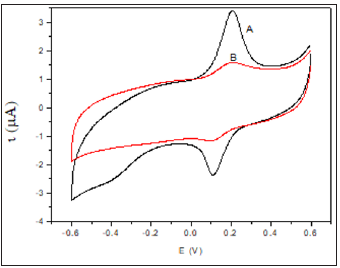 Where F is the Faraday constant, n is the stoichiometric number of electrons involved, R is the gas constant and T is the absolute temperature. The average ks obtained by this way for Auc5/S-DAB/ AuNPs/GC, Auc16/S-DAB/AuNPs/GC and Auc41/S-DAB/AuNPs/ GC electrodes were respectively 228, 322 and 308 s−1. These values constants are indicative of little kinetic limitations and let us consider the Auc with diameter of 16 nm as the most adequate size to the electron transfer with the electrode. Next, we must study if the best electron transfer in the electrode conformation is also the more effective HRP-Au mediation. The kinetic and analytical characterization of the HRP/Auc/S-DAB3/AuNPs/GCE electrodes were studied for the amperometric hydrogen peroxide reduction at working potential -0.3 V, selected as optimum. Figure 3 shows the calibration plots and the amperometric response inset in Figure 3.

Figure 3:Hydrogen peroxide calibration plots obtained at HRP/Auc/S-DAB3/AuNPs/GCE modified electrode with Auc of 5 nm (A), 16 nm (B) and 41 nm (C) at measuring potential of −0.3 V (vs. SCE). Inset: amperometric response of the biosensor to the addition of peroxide aliquots of 20 μM. 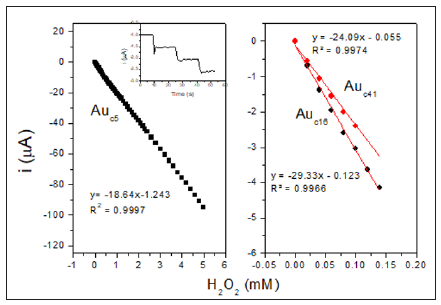 proving that the biosensor responds very quickly to peroxide additions. The HRP/Auc5/S-DAB/AuNPs/GC biosensor shows a single linear range, however Auc14/S-DAB/AuNPs/GC and Auc41/ S-DAB/AuNPs/GC present two active concentration ranges to measure. The first interval shows high sensitivity, better than the Auc5 biosensor, but from 140 μM or 100 μM respectively, the linear fit equations were y=-17.576x-2.115 (R² = 0.9970) and y = -13.305x-1.4146, (R² = 0.9975). The results are collected in Table 1 and shows as the Auc16 forms the best biosensor in a concentration range of 0-140 μM and Auc5 is more adequate if wider ranges must be used. These results are compared with other recently reported HRP biosensors in Table 1 in order to ensure the improvement of this new development. Finally, the activity of the immobilized HRP was evaluated throw the apparent overall rate constant, K´M and the apparent Michaelis constant, K´M estimated from the double reciprocal Lineweaver–Burk equation (Figure 4):

Table 1: Analytical results and comparison with other reported H2O2 biosensors.

The k app includes all the intrinsic constants together with the substrate diffusion outside and inside the SAMs, the enzyme catalysis, the electron mediation, the electron transfer and the electrolysis, and they provide the assessment of new devices. The obtained kapp and K´M values, shown in Table 2 are indicative of fast overall reaction rates with a highly effective enzymatic catalysis in all the cases (note that the obtained K´M is even lower than the intrinsic value of 3,70 mM) [13], being the HRP/Auc16/S-DAB3/ AuNPs/GCE the more efficient biosensor. The Savinell´s model [14] help us to identify the rate-limiting reaction step from the double reciprocal plot. As can be seen from Figure 4 all the obtained double reciprocal plots are a straight line indicative that a combination of enzyme catalysis and the electron mediation steps limits the overall reaction rate and the diffusion and electrolysis (applied potential) are fast enough [15-17].

Figure 4: Lineweaver-Burk plot at -0.3 V vs. SCE, for the H2O2 determination at the three biosensors in deaerated phosphate buffer pH 7. 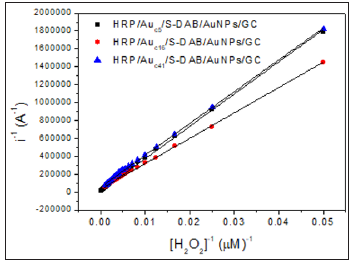 This work presents the kinetic and analytical study of electrodes modified with a thiolated DAB dendrimer with different sized gold nanoparticles, forming a self-assembled monolayer. The modified electrodes constitute a bioelectrochemical system for applications in the development of more sensitive and stable oxidase bienzymatic biosensors or in inhibition-based sensors. All the surfaces showed a fast electron transfer and good analytical response, principally HRP/Auc5/S-DAB/AuNPs/GC and HRP/Auc16/S-DAB/ AuNPs/GC electrodes in concentration ranges of 0-120 and 0-5000, with sensitivities of 418.6 and 266.3 μA mM-1 cm-2 respectively, and very low detection limits. In addition, the self assembles monolayer framework allowed the efficient immobilization of HRP with apparent Michaelis-Menten constants lower than the intrinsic one. Consequently, the biosensor achieves our objective and we hope that be the start of several and different derived biosensors.