Diabetes is the seventh leading cause of death in the nation [1]. The Puerto Rico Department of Health report that 3,115 annually die of the disease, making it the third leading cause of mortality in Puerto Rico (a US Commonwealth island in the Caribbean with a population of 3.6 million) where the mortality rate is 81.6% [2]. Indeed, the CDC report in 2012 showed that 12.7% of >18 years old Puerto Ricans were diabetics, making it one of the highest in the nation [3]. It is well recognized that depressive disorders are highly prevalent among diabetic individuals [4-7]. The condition of type 2 diabetes (T2D) is a chronic illness with established cross- sectional and longitudinal relationships with depression [8]. Moreover, some studies have reported that individuals with T2D have 2.9-fold significantly increased odds of having depression compared to non-diabetes individuals [5-7]. Also, depressive disorders are associated with increased medical morbidity and mortality in individuals with T2D [9]. In addition, there is evidence that individuals with T2D and depression when compared to those without have a higher prevalence of complications, such as retinopathy, nephropathy, among others [10]. Further, depression has been associated with poor adherence to treatment (e.g., diet & exercise regimens) and poor glycemic control, including, hyperglycemia and high hemoglobin A1c (HbA1c) levels [11-13].

Clinical depression is highly prevalent in diabetes, being up to two times more common among patients with diabetes than those without [4]. Depression in diabetes is not only distressing in and of itself but also consistently associated with poor adherence to self-care behaviors [14], worse glycemic control [15], complications [8,9,16], and mortality [17]. Further, both diabetes and depression have been related to activation of the HPA axis [18-20]. In this way, HPA axis a regulated system that represents one of the body’s mechanisms for responding to acute and chronic stress [21] and it is argue that depression as well as other form of stress such as inflammation via cytokines, activate the HPA axis [22,23]. According to Hänsel, Hong, Cámara and von Känel [24], cytokines are regulatory glycoprotein produced by a number of different cell types of which leukocytes are a major source. Circulating levels of cytokines are suitable markers of inflammation since they are produced by activated immune cells and lead to activation of other cells during inflammation. A number of studies have demonstrated that elevated production of some biomarkers such as inflammatory cytokines is associated with the development of depression in patients with chronic diseases [25-31].

There is a meta-analysis reporting significantly higher concentrations of the pro-inflammatory cytokine’s TNF-alpha and IL-6 in depressed subjects compared with control subjects [32]. Moreover, one source of inflammation in T2D patients may arise through commensal bacteria derived from the gut, referred to as endotoxins [33]. Endotoxin is derived from lipopolysaccharide (LPS), which represents cell wall fragments of gram-negative bacteria. For example, previous studies have found that individuals with obesity and T2D have elevated circulating levels of endotoxins compared with a healthy group [34]. Further, chronic persistence of endotoxins has been shown to elicit inflammatory responses [35-37] and hyperglycemic conditions [38,39]. Elevated endotoxins have also been shown to lead to insulin resistance and obesity [4]. A seen above, this mechanism of depression and T2D has been relatively of recent interest in some studies mostly separately [40- 42], but despite the fact that Puerto Rico has one of the highest prevalence of diabetes in the nation and being a high-risk group, this mechanism of depression associated with diabetes has not been examined with a Puerto Rican sample of T2D adult patients. There is a need to understand this mechanism of depression and T2D to reverse the trend of increasing diabetes prevalence. Therefore, the aims of this study were twofold. First, to compare depression levels and second, to compare biomarkers levels (cytokines & endotoxins) between T2D and a control group composed of apparently healthy individuals.

For this pilot study, we implemented a cross-sectional exploratory design using quantitative approach. This pilot study consisted of patients with the condition of T2D, who were at the medical office of an endocrinologist and recruited between July 1, 2015 and March 31, 2016 to participate in the research. Also, apparently healthy subjects were recruited from the community to participate as part of the control group.

The research proposal was submitted to the Institutional Review Board (IRB) of the Ponce Health Sciences University and it was approved on June 18, 2014 with the protocol number 140505-ER. Eligible participants with T2D were contacted at the endocrinologist’s office Dr. Alejandra Santiago Vives and aparently healthy participants were recruited from the community. Participants were informed about the purpose and experimental procedure of the study, and signed a copy of the Institutional Review Board approved consent form prior to participation. Before our obtaining any information or biological samples, patients completed an informed consent to participate, were briefed on the study, and were encouraged to ask questions. The intervention was designed to take place on the same day as the patients’ routine medical visit with the endocrinologist to minimize any discomfort.

Cytokines and Endotoxins in Plasma

A registered nurse (RN), member of the research team, drew blood samples for the assessment of immunological, blood chemistry, pro-inflammatory, oxidative stress parameters and endotoxins. Samples were collected from overnight- fasted participants by venipuncture and using blood collection tubes containing heparin. Blood samples were centrifuged at 1000 × g for 10 minutes at 4 °C. Plasma was isolated and stored at -80 °C until assayed.

Results are reported as means ± SD or median and range for parametric and nonparametric tests, respectively. Group differences in variables were compared using student’s t-test or the Mann- Whitney test. All analyses were performed using the SPSS software version 23.0 for Windows (IBM, USA). 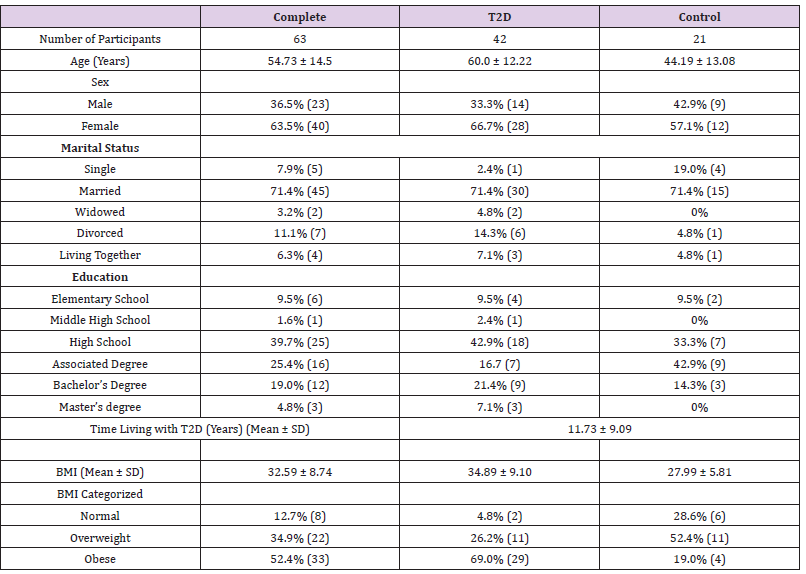 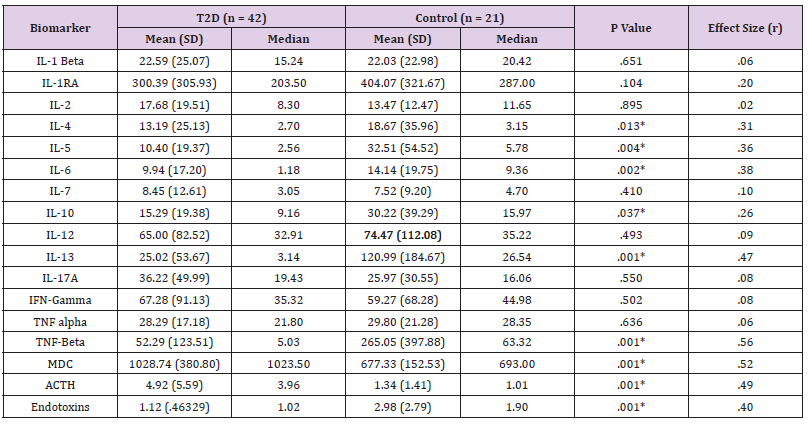 In terms of biomarkers, T2D participants obtained significant lower levels of cytokines, specifically, IL-4, IL-5, IL-6, IL-10, IL-13, and TNF-Beta. These results contrast a large body of literature supporting the hypothesis that diabetes is associated with higher levels of inflammation [56-60]. Nevertheless, other studies have found reduced levels of cytokines, specifically, IFN-alpha on diabetic subjects compared to controls [61]. Conversely, some studies have focused more on the role of inflammatory processes in the development and progression of T2D and have found elevation of cytokines in apparently healthy individuals who later go to develop T2D [62-64], suggesting that inflammation occurs early during the period of impaired glucose tolerance, prior to the diagnosis of T2D. In the current study is notable that 52.4% and 19.0% of our sample of apparently healthy individuals were categorized as overweight and obese, respectively, which probably may explain partially the results regarding biomarkers. In contrast, T2D participants obtained higher significant levels of MDC and ACTH, which are related to cortisol release in the HPA axis. Some crosssectional studies have found an elevation of cortisol levels in T2D patients when compare to healthy control subjects [65-67]. While other studies specifically have shown that T2D participants have an elevation of ACTH [68, 69]. Thus, Chiodini et al. [70] suggest that HPA axis activity is enhanced in T2D patients with chronic complications and the degree of cortisol secretion is directly associated with the presence and the number of diabetes related complications, as mentioned before, in the current sample of T2D, 64.7% has at least one complication, which somehow support the notion of the association between diabetes and the cortisol release in the HPA axis via MDC and especially ACTH.

On the other hand, T2D participants obtained significant lower levels of endotoxins, which contrast with some studies [34] that found that endotoxin levels were significant elevated in T2D patients when compared to non-diabetic subjects. Nevertheless, our results concur with some studies, which have found significantly lower levels of endotoxins [71,72] and they argue that composition of the intestinal microbiota in adults with T2D was different than non-diabetic adult individuals. At the same time, Al- Attas et al. [40] found that serum endotoxin levels were higher on T2D subjects treated with insulin when compared to non-diabetic participants; however, T2D subjects treated with oral medications, such as metformin and rosiglitazone, obtained significantly lower levels of endotoxins than the other groups. In this way, 50% of the T2D patients reported that they were receiving oral treatment for their diabetic condition, which may explain somehow that T2D patients obtained lower levels of endotoxins. Nevertheless, Munck, Guyre and Holbrook [73] argue that inadequate responses by some allostatic systems trigger compensatory increases in others. If cortisol secretion does not increase in response to stress, secretion of inflammatory cytokines, which usually down-regulated by cortisol, increases, with potentially pathophysiological effects. However, in the case of the current study apparently occurred the opposite where cortisol was elevated and due to this, cytokines and endotoxins were reduced as a response to this unbalance in the allostatic system. Nonetheless, the suggested role of HPA axis dysregulation in both depression and T2D provides a plausible common link between the two disorders [74] and the results of the current study somehow support this notion.

Some limitations of this study include the use of a convenience sample of T2D patients from only one endocrinologist medical office, which is not representative of the majority of T2D patients in Puerto Rico. We were not able to matched T2D patients with control subject in terms of BMI, which is a factor to be considered because may have an effect when comparing cytokines level. In addition, the sample was relatively small, which also limits the use of other statistical analysis, such as logistic regression. Finally, the study cross-sectional design impedes to draw cause and effect conclusion of the findings. However, despite these limitations, this study is, to our understanding, the first in Puerto Rico to examine mechanism of depression in T2D adult patients via the activation of the HPA axis having as biomarkers such as cytokines and endotoxins. However, there is still a need for research to better understand this mechanism of depression in T2D patients using biomarkers; therefore, a larger sample is needed to examine the importance of these biomarkers due to, for example, the large number of cytokines and their particular functions. Moreover, a larger sample will allow the use other statistics such as logistic regression to better understand the association of these biomarkers in the mechanism of depression related to T2D.

Depression symptoms were higher in T2D patients than individuals in the control group, which suggest that it is important to examine depression in T2D patients due to its implications in treatment adherence, self-care, and complications. In terms of biomarkers, results provide support of the activation of the HPA axis in T2D and depression symptomatology since T2D patients obtained lower levels of cytokines and endotoxins; however, T2D obtained higher levels in MDC and ACTH, which probably was due to an unbalance in the allostatic system.

“The project described was supported by the RCMI Program Award Number G12MD007579 from the National Institute on Minority Health and Health Disparities. The content is solely the responsibility of the authors and does not necessarily represent the official views of the National Institutes of Health”.

We want to express our gratitude to all diabetic patients and healthy individuals participating in the study and to Dr. Alejandra Santiago Vives, who allowed and helped us recruit her patients from her endocrinology medical office.

The authors declare no conflict of interest. The founding sponsors had no role in the design of the study; in the collection, analyses, or interpretation of data; in the writing of the manuscript, and in the decision to publish the results.