Insulin-like growth factors (IGFs) plays an interesting role as a growth factor. Its function is mainly modulated by family of IGF binding proteins (IGFBPs). There are six important members, which maintain a structural and functional similarity and perform different functions. Several studies have linked IGFBPs to obesity, insulin resistance, metabolic syndrome and cancer. In this article, we provide the most relevant and recent implication of IGFBPs member in obesity and cancer, and some approach of each member as a therapeutic target or biological biomarker

Insulin-like growth factors (IGFs) are a protein family that actively participate in mammalian development and growth [1]. These hormones function as the main mediator of somatic growth mediated by growth hormone (GH), as well as an important component of GH-independent anabolic responses [2,3]. The mechanism of action of IGF need a complex system to act, often, it is known as the IGF “axis” system. This system should include two IGFs type as IGF-type 1 (IGF-1) and IGF-type 2 (IGF-2), two cell-surface receptors such as IGF-receptor type 1 (IGF-1R) and IGF-receptor type 2 (IGF-2R), specific to each IGFs type with tyrosine kinase activity and a family of IGF binding proteins (IGFBPs) [4]. The response of the IGF/IGF-receptor binding results in kinase activation and initiation of intracellular signaling via the serine/threonine-protein kinase (AKT) pathway (Figure 1) [5]. Interestingly, the IGFBPs family modulate the signaling process since it regulates the biological actions of IGFs in two different ways, the IGF receptor-dependent model (IGFBPs can act as an inhibitor, preventing the IGF/IGF-receptor association and as an activator, facilitating binding with IGF receptors) and IGF receptor-independent model (increasing the half-lives of the IGFs or providing a means of functional and/or tissue specificity) [6].

Figure 1: Schematic of IGF in obesity/cancer signaling and implication of IGFBP in their modulation. 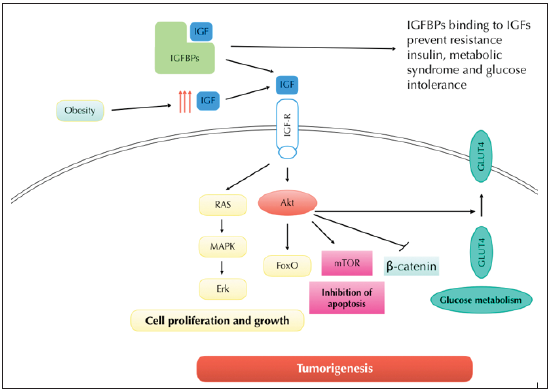 There are a six well characterized high affinity mammalian IGFBPs genes, designated IGFBP-1 through -6, and another not well-defined low affinity IGFBPs family, since IGFBP-7 to -10. Together, they constitute the IGFBP superfamily [7]. The primary structures of high-affinity binding IGFBPs family contain three principal domains: The N-terminal domain, the mid-region and the C-terminal domain. The N-terminal domain share approximately 58% of sequence between the six component of the high-affinity IGFBPs. This domain is characterized by containing 12 cysteine residues highly conserved. Within this domain, a local motif (GCGCCxxC) is also well conserved among the IGFBPs. However, the significance of this motif is as yet unknown [7-9]. The mid-region separates the N- from the C-terminal domain. The sequence for this domain appears to be unique to the family members. Two principal post-transductional modifications are present into. There are glycosylation and phosphorylation. The ability to bind to IGFs with high affinity appears not be influenced by N- or O-glycosylation, although there may be effects on resistance to proteolysis.

The purpose of phosphorylation is yet unclear, but there is evidence that phosphorylation may affect to the affinity for IGFs [7-10]. Finally, the C-terminal domain is highly conserved. Six cysteines is found and are strictly conserved and involved in intradomain disulfide bond formation. Interestingly, the C-terminal domain sequences share high similarity with the thyroglobulin-type-I domain. Although its function is unknown, this domain is found in a number of proteins with varying physiological functions in different organisms [7,11]. The low-affinity IGFBP family share structurally only few characteristics in the N-terminal domain with the high affinity IGFBP family. The C-terminal domain shows a significative structural and functional differences, which suggests its role in the affinity to IGF. The C-terminus is also highly variable in the low affinity IGFBP family, which differs in the number of domains, structure, sequence and function [7].

The Implication of the IGFBPs Family in Obesity and Cancer

IGFBP-1: Insulin-like growth gactor binding protein type 1 (IGFBP- 1), functions as an inhibitor of the cellular and fetal growth by sequestering IGFs in hypoxia condition [12]. It is also a negative regulator of the p53/BAK-dependent pathway of apoptosis [13]. Due to this functions, IGFBP-1 could play an important role in obesity and cancer. Several studies have been concluded that conditioned levels of IGFBP-1 affects by physiological variation of glucose and insulin, which glucose stimulates the secretion of IGFBP-1 while insulin suppresses IGFBP-1 secretion [14,15]. The implication for chronically low IGFBP-1 in obese and diabetes patients could increase IGF bioavailability, deteriorating metabolic functions and provide chronic mitogenic stimuli of relevance for neoplastic transformation in target cells and tissue. However, the involvement of IGFBP-1 in cancer is yet unclear and remain controversial. Some studies suggest that IGFBP-1 inhibits IGF-1 induced growth (Figure 1). But more studies are needed to clarify if this mechanism has significant effects on tumor growth [16].

IGFBP-2: Insulin-like growth factor binding protein type 2 (IGFBP- 2) regulates several cellular processes such as proliferation, cell migration, and adhesion. Epidemiological studies indicate that IGFBP-2 is associated inversely with adiposity related insulin resistance, body mass index (BMI) and insulin sensitivity in the context of type 2 diabetes (T2D). In obesity, circulating levels of IGFBP-2 are suppressed, and low levels are associated with T2D and metabolic syndrome [17]. Recent studies have also demonstrated that the overexpression of IGFBP-2 inhibits both adipogenesis and lipogenesis in visceral, but not subcutaneous, adipocytes. The effect was observed in the presence and the absence of IGF-1, showing an independent inhibitory effect on adipogenesis. There indicate that IGFBP-2 could have a protective function in obesity and diabetes [18,19]. IGFBP-2 is one of the commonly expressed IGFBPs in a wide range of human cancers [20]. Increased serum IGFBP-2 levels are associated with multiple cancers as prostate, breast, ovarian and colorectal cancer [21]. Moreover, overexpression or addition of exogenous IGFBP-2 also induces proliferation, migration and invasion of these cells [22]. These results can purpose IGFBP-2 as a promising target to inhibit the metastasis and overcome the chemo- resistance and an independent indicator of malignancy.

IGFBP-3: The main function of insulin-like growth factor binding protein (IGFBP-3) is related to the bioavailability of IGF-1, binding to and sequestering IGF-1, and to exert IGF-1 independent effects. Therefore, IGFBP-3 modulates the principal biological actions of the IGFs [23]. Recent studies have been shown the role of IGFBP-3 in metabolic regulation in adipose tissue. IGFBP-3 overexpression in transgenic mice suggests that IGFBP-3 results in fasting hyperglycemia, glucose intolerance, and insulin resistance [24]. IGFBP-3 can act in an IGF-independent manner by translocating to the nucleus and bind to retinoid X receptor (RXR) and Peroxisome proliferator-activated receptor type gamma (PPAR-), inhibiting adipose differentiation [25]. This signaling could be also regulated by vitamin D system, showing a new alternative mechanism in insulin signaling associated with obesity [26]. IGFBP-3 is also implicated in cancer. More specifically, IGFBP-3 is known as a pro-apoptotic molecule and growth inhibitory with a protective effect on large cancer type as prostate, colorectal, breast or lung cancer. However, this effect is controversial in different cancer type and further research is needed to clarify the role of IGFBP-3 in the pathogenesis of cancer [27].

IGFBP-4: The liver is the main source of circulating insulin-like growth factor binding proteins (IGFBP-4), that is involved in the systemic and local regulation of IGF activity [28]. The role if IGFBP- 4 in adipose tissue is unclear, additional finding is required to clarify the direct effect of this protein to delay or attenuate adipose tissue dysfunction in humans and metabolic syndrome. More studies also show the conflictive association between IGFBP-4 BMI, glucose metabolism and insulin resistance [29]. Careful interpretation of data is necessary as such findings require support by more studies. IGFBP-4 acts by binding to IGF-I and IGF-II and modulating its biological effects [30]. There is interesting because it could be an important effect in cancer development, although additional studies are needed. The expression of IGFBP-4 have studied in large cancer type with controversial results. There is known that overexpression IGFBP-4 inhibits cellular growth IGF-induced and through a through a mechanism independent of IGFs in vitro and in vivo. Moreover, most cancers express IGFBP-4 at levels which correlate with their state of differentiation. Overexpression of IGFBP-4 in vivo has been reported to decrease the growth of prostate cancer. The effect of altered expression of IGFBP-4 in vivo in colon and other cancers needs to be explored as locally available IGFs appear to stimulate mitogenesis. Thus, the effects of IGFBP-4 on tumor growth are uncertain [31].

IGFBP-5: Insulin-like growth factor binding protein -5 (IGFBP- 5) is the most conserved gene of the IGFBPs family in all vertebrates. It acts binding to IGFs, leading to altered cell proliferation, apoptosis, survival and cell migration. Only a few studies have been linked the effect IGFBP-5 with obesity. A study has examined the association of polymorphism on the IGFBP-5 gene with metabolic syndrome. This study has shown that these polymorphisms were strongly associated with serum adiponectin concentration in glucose intolerance patients. There also founded a positive correlation between IGFBP-5 and adiponectin gene expression in subcutaneous adipose tissue in metabolic syndrome patients [32]. However, more finding is needed to confirm the role of IGFBP-5 in glucose metabolism. IGFBP-5 participates in development of cancer in IGF-dependent and independent context. It has been discovered that IGFPB-5 is expressed in a multiple cancer type. However, further research into the role of the IGFBP-5 axis in tumor growth is required to resolve the functional implication in cell proliferation [33,34].

IGFBP-6: The principal function of insulin-like growth factor binding proteins -6 (IGFBP-6) is inhibiting IGF-II actions. More specifically, IGFBP-6 inhibits cell proliferation, differentiation and migration induced by IGF-II. In contrast, has few or no effect on IGF-I actions, due to its lower binding affinity [35]. A study has been demonstrated the relationships between IGFBP-6 concentrations and Type 1 Diabetes (T1D) patients. The logistic regression data suggests that T1D patients with higher IGFBP-6 are at an increased risk of developing complications of other organs. That is shown the important modulator role of IGF-II in [36]. The expression of IGFBP-6 is lower tumoral cells, suggesting an inhibitory effect. IGFBP- 6 prefers binding to IGF-II over IGF-I. A principal role for IGFBP- 6 is inhibition of their actions following a dependent model, but recent studies also shown that IGFBP-6 also could act on IGF-independent manner, by angiogenesis inhibition and tumoral cell migration [37]. Thus, can suggest a possible targeted-therapy against specific tumor that depend on IGF-II to growth.

The IGFBP family has a relevant role in the disorder associated with obesity such as glucose intolerance, metabolic syndrome or insulin resistance. But this implication needs to be approached with more studies, especially in family members from IGFBP-4 to IGFBP-6. The IGFBP family also have an interesting participation in cancer development. It participates on tumor growth, differentiation or cellular migration. This suggests that IGFBPs may be an interesting therapeutic target, which implies a reduction in the growth of IGF-dependent tumors.

This study was supported by “Centros de Investigación En Red” (CIBER, CB06/03/0018) of the “Instituto de Salud Carlos III” (ISCIII). Grant from ISCIII (PI18/01399) and co-financed by the European Regional Development Fund (FEDER). ACM was the recipient of an FPU grant from Education Ministry, Madrid, Spain (Ref: FPU16/02011); and MMG was the recipient of the Nicolas Monardes Program from the “Servicio Andaluz de Salud, Junta de Andalucía”, Spain (RC-0001-2018).