Preservatives have been frequently used to improve the shelf life of food. The preservation of eggplants was determined using three chemical preservatives; ascorbic acid, sodium benzoate and sodium metabisulphite applied at different concentrations. The microbial load was determined to ascertain the efficacy of the preservatives. The microbiological population and diversity of the eggplant was assessed before and after treatment using standard methods. The plate count techniques were adopted to determine the total colony forming unit of the sample. Antimicrobial activities revealed that sodium benzoate inhibits the growth of bacterial and fungal species even at low concentration. Sodium metabisulphite was effective on bacteria while ascorbic acid showed a stimulatory response on the growth of fungi and bacteria.

Four bacteria species namely, Staphylococcus aureus, Bacillus subtilis, Micrococcus luteus and Enterococcus faecalis and four fungal species, namely, Saccharomyces, Fusarium, Aspergillus and Rhizopus were isolated. Most of the isolates are soil and water borne which could serve as vehicle for contamination of the eggplants. Some of the isolates like Staphylococcus and Bacillus are involved in food spoilage and borne infections while Aspergillus and Fusarium species are notable causes of mycotoxicosis in man and animals. This study shows that preservatives applied at appropriate concentrations can create adequate protection from spoilage microorganisms, and therefore recommends the use of sodium benzoate to enhance the keeping quality of eggplants

The huge loss of fruits and vegetables to spoilage is becoming alarming. The enormous economic loss to farmers and reduction in gross domestic product (GDP) to producing nations has been the discourse in many international conferences. The high moisture contents and nutritional components of fruits and vegetables predispose it to both chemical and microbial spoilage [1-8]. Fruits, apart from its nutritional values have so many therapeutic potentials. Some contain phytochemical and antioxidant agents [9-11,5], while some have been employed in production of beverages, probiotics and prebiotics. Garden egg contains flavonoids, tropane, glycoalkaloids, argiuine, lanosterol, gramisterol, aspartic acid as important constituents [9]. The plant is reported to have analgesia, antipyretic, antioxidant, anti-inflammatory, antiasthmatic, hypolipidenic, hypotensive, antiplatelet, intraocular pressure reducing and anaphylactic reaction inhibitory activities [12].

The demand for garden egg is on the increase as it has gone beyond being a staple fruit to a more commercial commodity that is now a major source of income for producing households and marketers in the forest zone [13]. Since fruits are generally acidic, they are naturally amenable to preservation. Secondly, increased acidity can activate chemical reactions such as pectin which lowers water activity and reduces the possibility of microbial growth. Dehydration is among the oldest and most common forms of fruit preservation as moisture in the fruit is driven off; leaving a stable food that has moisture content below that at which microorganisms can grow. This research reports the microbiological quality of garden eggs and different chemical preservation methods.

Preparation of Preservatives and Treatment of Samples

Two hundred milliliters of distilled water were sterilized in a 500mls conical flask. This was repeated in four sets. Different concentrations (10g, 5g, 3g, and 1g) of ascorbic acid was dissolved in the sterile distilled water and shaken vigorously. The procedure was repeated with sodium metabisulphite and sodium benzoate. Twenty grams (20g) of fresh eggplants were suspended on the prepared preservatives and left to stand on the bench for 24h. The microbiological procedure was repeated for the samples treated with the preservatives.

Enumeration and Characterization of Microbial Isolates

The number of viable colonies developed were enumerated and express as colony forming unit per grams [15,16]. The characterization and identification of bacteria and fungi isolates were based on the colonial morphology, microscopic and standard biochemical test [17-21].

Table 1 shows the total microbial populations prior to the addition of preservatives. Counts ranged between 3.3 x 105 - 1.43 x 107 for heterotrophic bacteria, 1.0 x 105 – 1.45 x 107 for heterotrophic fungi and 1.0 x 104 – 3.2 x 104 for coliform bacteria. Table 2 shows the biochemical and carbohydrate characterization of bacteria isolated from the untreated samples. Four species of bacteria namely, Staphylococcus aureus, Bacillus subtilis, and Micrococcus luteus and Enterococcus fàecalis were isolated. Four fungal species namely Rhizopus nigrican, Saccharomyces cerevisiae, Aspergillus and Fusarium species were isolated from the sample as shown in Table 3. Table 4 shows the total count and colony characterization of bacterial isolates after treatment with different concentrations of preservatives. Samples treated with ascorbic acid did not show any effect, especially at concentrations 1g and 3g, as the organisms grew luxuriantly. Remarkable result was evident at concentrations 5g and 10g as there was reduction on both microbial population and diversity. 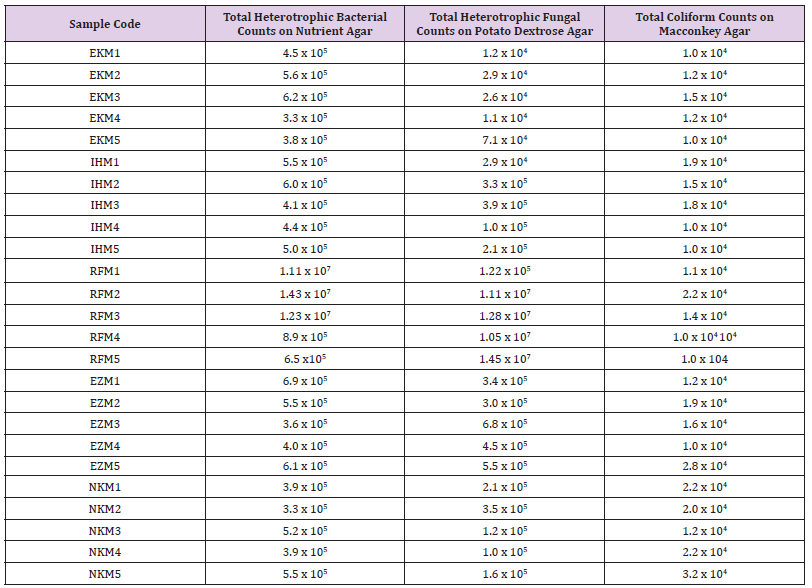 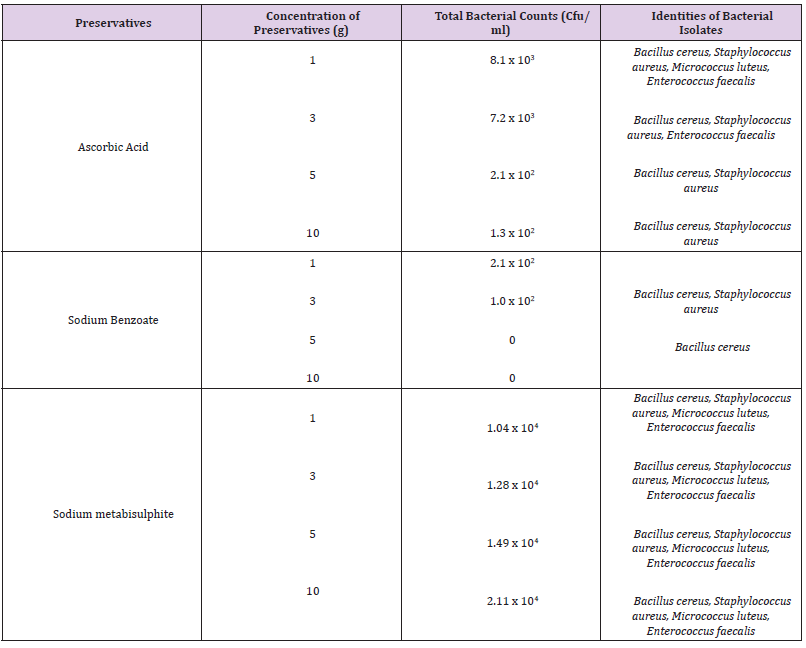 There was significant decrease in both cells counts and bacterial types in samples treated with sodium benzoate. The higher concentrations (5g and 10g) inhibited the growth of the organisms. Sodium metabisulphite was stimulatory and the bacterial populations increased with concentration of the preservatives. The effects of preservatives on the fungal isolates on the samples is shown in Table 5. The higher concentrations (5g and 10g) of sodium benzoate and sodium metabisulphite showed significant inhibition on the growth of the fungal isolates. Ascorbic acid showed a stimulatory effect on the growth of bacteria and fungi. The percentage occurrence of bacteria and fungi isolated from the samples is shown in Table 6. The yeasts, Saccharomyces species and the bacterium, Enterococcus faecalis were dominant species isolated from the samples. The distribution of the bacteria and fungi isolated across the sample locations (markets) is shown in Table 7. Saccharomyces, Bacillus and Enterococcus faecalis were isolated in the sample across the markets. 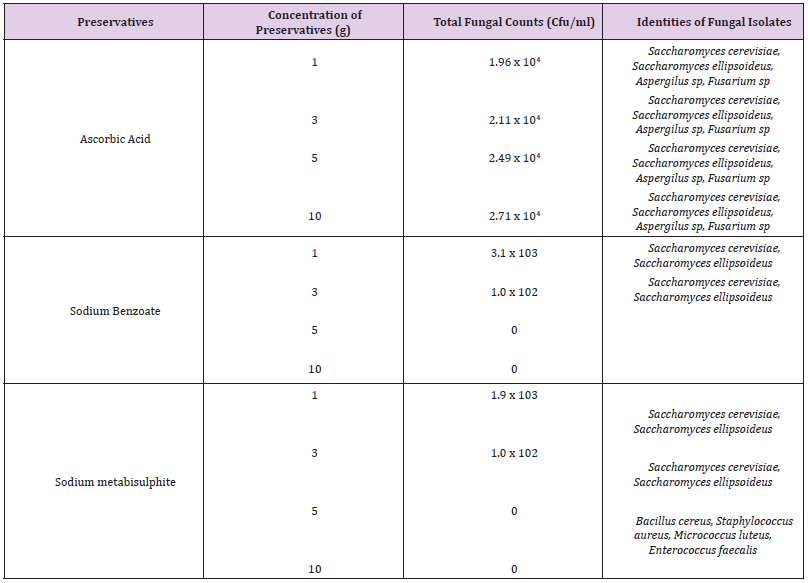 Table 6:Percentage distribution of Bacteria and Fungi in samples. 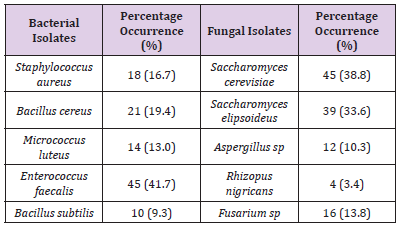 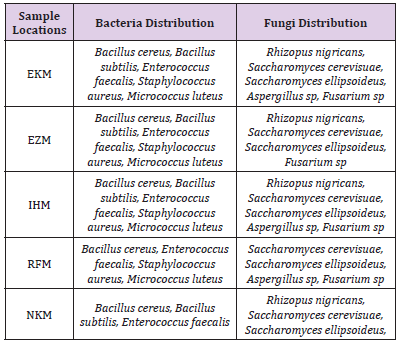 The results obtained shows that the eggplants were contaminated with diverse microorganisms. Some of these isolates have been found to be associated with certain food borne illnesses, most of which arise from improper handling, preparation and poor food storage facilities [22,23], also can cause food spoilage [23,24]. The presence of some pathogenic bacteria such as Bacillus subtilis, Enterococcus faecalis, Micrococcus luteus and Staphylococcus aureus is worrisome because of their public health importance. Bacillus subtilis is a spore former that can withstand adverse effects of preservative(s). These structures pose resistant to environmental stress such as heat, ultraviolet radiation, chemical disinfectant and desiccation [23]. The presence of Enterococcus faecalis associated with faecal contamination is notable causative agent of food borne gastroenteritis and bacterial diarrhea disease [23,25-27].

Reported that some strains of Aspergillus flavus produce aflatoxins, which are cancerous in mammals including human. The presence of these microorganisms is an indication of the use of contaminated water by food handler and soil where they are cultivated [23,25,26]. Saccharomyces cerevisiae and Bacillus species are the major fermentative organisms and may influence microbial food deterioration and spoilage [26,28]. Results shows that the chemical preservatives used were effective against microbial growth at different concentrations. This was evident in the reduction of bacterial and fungal count over time. Chemical preservatives have been used to improve the shelf lives of food substances as they inhibit, retard or arrest the growth of microorganisms [7,29-31]. Investigation of antimicrobial activities of the three preservatives used showed that sodium benzoate was more effective on both bacterial and fungal species.

This was also reported by [32]. This was evident as samples treated with sodium benzoate had a lower microbial count as well as decrease in microbial diversities. The low hydrogen ion concentration, (pH) could account for the reduction in both microbial populations and diversities [32-34]. The higher bacteria contamination shown in samples treated with sodium metabisulphite indicates a stimulatory response rather than antagonistic response. Sodium metabisulphite was very effective against fungi at higher concentrations, whereas ascorbic acid was stimulatory to the growth of fungi, especially the yeasts, Saccharomyces. This study has established microbiological safety of eggplants treated with chemical preservatives. The use of chemical preservatives in appropriate concentration in addition to other hurdles techniques recommended by [30] could serve as a check in the control of microbial contamination.