This study aimed at assessing the Lead (Pb) residues in some selected canned foods obtained from some superstores in Benin City Metropolis and their health risk implications. Forty Five (45) samples of five different canned foods (chicken, corned beef, peas, mushrooms and corn) of varied brands from various industrial countries were procured from open market stores at Lagos Street and selected super markets along Ugbowo Lagos Road, Benin City with their controls. The samples were taken to the laboratory for Pb digestion. The results of carcinogenic risk for Pb, revealed slight increase in values above the threshold. Regulatory bodies such as NAFDAC (National Agency for Food and Drugs and Administration control) and SON (Standard Organization of Nigeria) should reinforce the need to control canned food brands flooded with Pb before dispatched to consumers..

In Nigeria, one of the fastest forms of food consumed daily by humans are canned foods. These foods might be beverages, corned beef, peas, mushrooms, chicken and corn prepared in their natural state and preserved in chemicals, engrossed and embossed with lead materials, so that their shelf life will last. This well-known carcinogenic metal Lead (Pb) is pervasive, and one of the first metals revealed by man [1,2]. It is commonly found in air, water, soil and food [3]. Lead is considered as a powerful industrial poison, and its toxicological signs are well acknowledged [4].

The toxicity of lead is commonly graded as the greatest health risk [5]. Canned foods are generally exposed to lead impurity during the process of canning. Solder used in the production of cans has been known as a basis of lead pollution [6]. Several health problems associated with lead poisoning such as damages of the haematopoietic system (the blood), the nervous system and the kidneys thus meddling with their roles [7]. These can result to antagonistic overactive behaviour and psychological delay such seizures and cerebral palsy [8]. This study investigated the potential carcinogenic risks associated with lead (Pb) in some consumed canned foods.

Forty Five (45) samples of five different canned foods (chicken, corned beef, peas, mushrooms and corn) of varied brands and various industrial countries were procured from different local superstores. The brands can be allotted sample codes and the particulars on the containers were recorded based by the methods of Erhunmwunse et al. [9]. The samples were taken to the laboratory for analysis and heavy metal (Pb) digestion. The samples were standardised according to the methods of AOAC [10]. The blank reagent was prepared with same procedure but without samples and the Heavy metal content was read off using AAS Buck Scientific (Model 210 VGP) [11].

The equipment was first calibrated using buck certified atomic absorption standards for the respective trace metals to obtain calibration curves. Reagent blanks were first run at intervals of every ten sample analysis to eradicate equipment drift. All samples were analysed in duplicates for reproducibility, accuracy and precision. 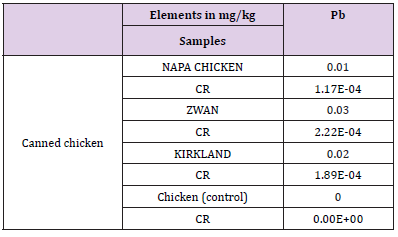 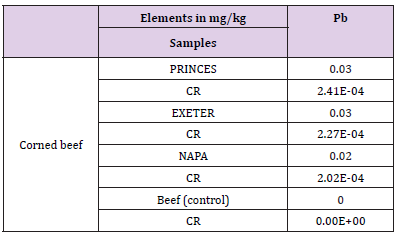 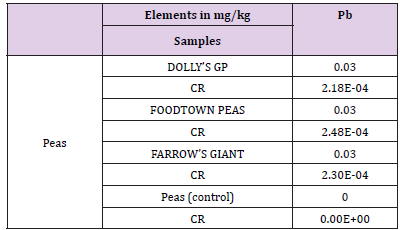 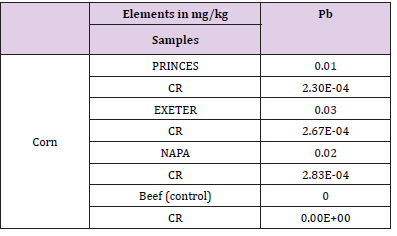 In the canned corns (GREEN GIANT, DOLLY’S SC and SUNRIPE WHOLE) and the control corns, it was observed that the results obtained for the exposure via ingestion were 0.01, 0.03 0.02 and 0.00 and for the CR (2.30E-04, 2.67E-04, 2.83-04 and 0.00E+00) respectively (Table 5). The values obtained from the canned corns differed from the control. Figure 1 shows the variations of Pb concentrations across the sampled canned food brands. The results indicated that almost all canned food brands were lower than the FAO/WHO CODEX limits exempting DOLLY’S SC (1.1 mg/kg) and SUNRIPE WHOLE (1.07 mg/kg).

Figure 1: Comparison between the Lead (Pb) concentrations in varied canned foods with their controls and CODEX limit. 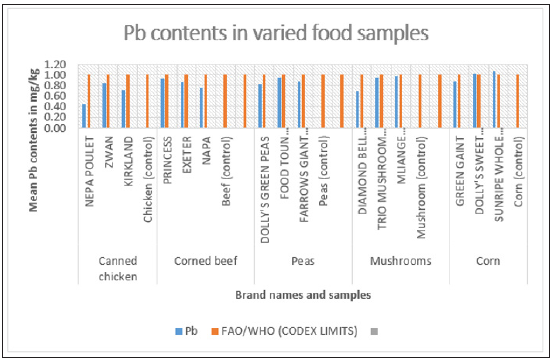 The findings of this study revealed high concentrations of Pb in all the studied food brands exceeding the USEPA, [17] carcinogenic risks acceptable of 1.0E-06 to 1.0E-04. Been a toxic metal and at very little concentration, it can result to health threats because of its non-biodegradable nature in living organism [18]. The occurrence of Pb in canned food may due to use of Pb in product package materials or due to absorbed lead by plants in limit level [1,2,19]. Lead has been found to be carcinogenic and also a probable enzyme inhibitor [20], which interferes with fertility and causes renal damage. It has been confirmed that children under six (6) years of age and expectant mothers are most vulnerable to the serve health effects of lead [21-25]. The findings of this study also revealed that that almost all canned food brands were lower than the FAO/WHO CODEX [26] limit exempting DOLLY’S SWEET CORN and SUNRIPE WHOLE SWEET CORN. Moreover, the Pb concentration in the control corn was BDL (below detectable limits).

The examined canned foods are potentials for a lifetime carcinogenic risk.