Research study of salvage interstitial radiotherapy of prostate cancer (PC) recurrence was started in the end of the XX century. Lately more and more attention has been paid to the high-dose rate brachytherapy (HDR-BT) as a way of achieving local tumor control. According to a number of authors the preliminary evidence of HBR-BT revealed a high efficiency of local PCR control at the trough level of toxic response from critical pelvic organs [1-3].

The research includes 28 patients aged 53 to 78 years old (average age is 66 years old) with histologically verified PC recurrence. Within the period 2015 - 2017 all the patients got a life-saving HDR-BT in the Russian Scientific Center of Roentgenoradiology in Moscow. Brachytherapy was carried out as 2 fractions with the single tumor dose of 12,5 Gy. There was a two-week gap between fractions with the total tumor dose of 25 Gy. The follow-up period is 9 to 36 months. The study was approved by the Ethics Committee of the Russian Research Center for Radiology of the Russian Ministry of Health. All patients gave written informed consent. Five cases of recurrence were detected after external beam radiation therapy (EBRT). Six cases - after the combination of high-dose rate radiotherapy and brachytherapy LDR/HDR (HDR 10 Gy/LDR 110 Gy + HBRT 46 Gy). Eleven cases - after low-dose rate brachytherapy (LDR). Five patients - after radical prostatectomy (RP). One patient - after Hi-Fu. The period from the performed background therapy to the recurrence was 6 to 72 months (30 months on an average). The patients were divided into following risk groups (NCCN Classification) 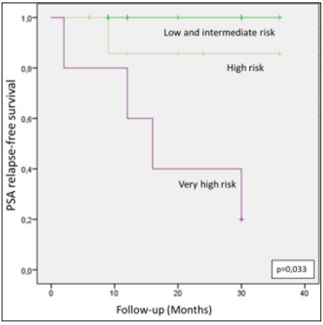 Overall biochemical free survival rate (BFSR) is 82.1%. There are 5 people having a growing prostatic specific antigen (PSA) while the case follow-up. Four recurrence cases with metastases in lymph nodes and bones were brought out as a result of 68Ga- PSMA PET examination. There is 1 case of a confirmed local tumor recurrence. Significant factors of the disease progression after salvage brachytherapy are: risk group (see the diagram below) Figure 1, pretreatment PSA high, time line from the background therapy to biochemical recurrence uprise and PSA level if there’s prostate cancer recurrence after the background therapy. Gastrointestinal toxic response was non-critical. After the LDR-BT cancellation there were 2 patients who had delayed genitourinary toxic response of the third degree.

This research work is aimed at the primary analysis of prostate cancer treatment referring to the patients who have experienced HDR-BT after a confirmed locally recurrent tumor having been treated with diverse treatment modes.