A 9 years old female child presented a rectal mass with a well-defined margin, 3 cm in greatest diameter and 5 cm from the anal verge is reported. After full investigations, the tumor was excised guided by frozen section using TEO platform (Karl Storz, Tuttilingen, Germany). Diagnosis of perivascular epithelioid cell tumor (PEComa) is based on the co-existence of smooth muscle markers and melanocytic markers after immnohistochemical staining. After 1 year of follow up, there is no local or distant recurrence. PEComa has been described recently as a rare neoplasm of uncertain malignancy with no definite standardized management. A review of rectal PEComa in the literature was also described.

Perivascular epithelioid cell tumour (PEComa), is a rare group of mesenchymal tumours consisting of perivascular epithelioid cells (PECs) with uncertain malignant potential that can occur in any part of the human body [1]. The cell type from which these tumours origin remains unknown. Normally, no perivascular epitheloid cells exist; the name refers to the characteristics of the tumour when examined under the microscope [2]. Perivascular epithelioid cell tumors (PEComa) are rare mesenchymal neoplasms and include angiomyolipoma, clear cell “sugar” tumor of the lung and extrapulmonary sites, lymphangioleiomyomatosis, and clear cell myomelanocytic tumor of the falciform ligament/ ligamentum teres [3]. To our knowledge, few cases of PEComa were described in the uterus, kidney, liver, pancreas and bone. Only 5 case-reports of rectal PEComa in the literature were documented [4-7]. In addition, wider local excision of rectal PEComa using TEO platform (Karl Storz, Tuttilingen, Germany) was not previously described.

The procedure started by marking of the resection margins by electro-cauterization (Figure 1) and injection of methylene blue around the mass to help easy visualization of the planes around the mass (Figure 2). Continuation in the resection margins were guided by intraoperative histo-pathological frozen-section. Rectal repair by primary suturing with V-loc was done. Surgiflow was used to seal bleeding points and fill the cavity in the mesorectum behind the suture line. A Foley’s catheter was used transanally as a drain for 2 days postoperatively. The Patient started full oral feeding in the 2nd postoperative day and was discharged from hospital after 4 days. Using Kirwan scoring of the continence function, the patient was Kirwan grade one. Pathologic examination showed a well circumscribed tumoral proliferation formed of large clear cells with small vascular spaces in between (Figure 3). IHC revealed negative cytoplasmic staining to CD117 (Figure 4), positive staining for HMB-45 (Figure 5), SMA positive in vascular spaces with a negative cytoplasmic staining for SMA (Figure 6), inhibin, CK7, CK20, CD117, CD10, chromogranin, synaptophysin and CK.

Figure 1: Transanal endoscopic injection of methylene blue into the tumor bed and determination of the excision margins by electrodiathermy. 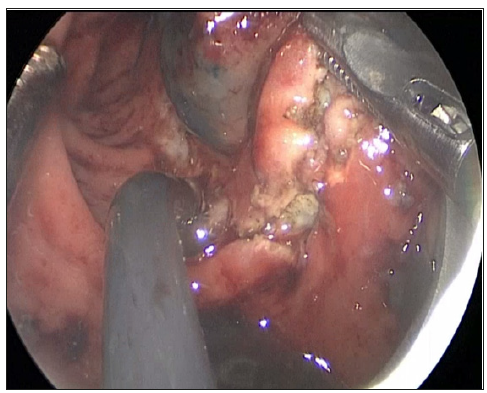 Figure 2: Injection of methylene blue around the mass. 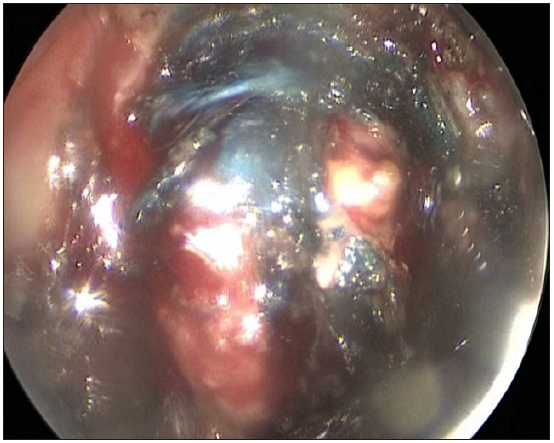 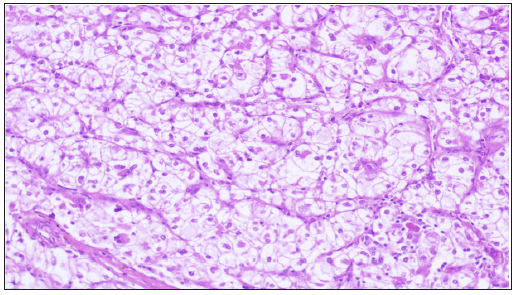 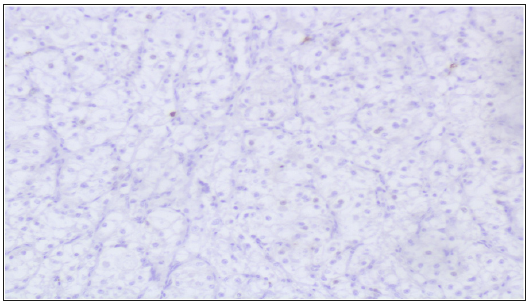 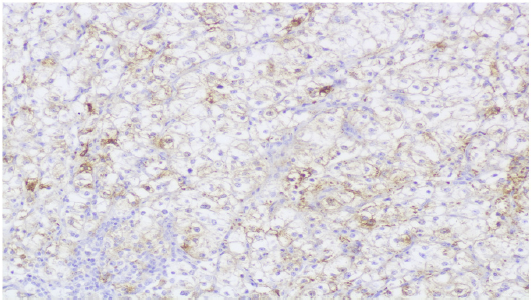 In 1992, PEComa was identified by the combined features of angiolipomas and clear cell “sugar” tumors of the lung [8]. In 2002, PEComa were recognized officially by the World Health Organization [9]. An Immunohistochemical staining for PEComa is the main tool for diagnosis of the coexistence of positivity for smooth muscle and melanocytic markers [10]. In our case, epithelioid type of gastrointestinal stromal tumor (GIST) was the main differential diagnosis. Exclusion of GIST was based on immunohistochemical ground with CD117, CD34 showing negative results and positive HMB-45. The decision to do a radical resection with total mesorectal excision or local excision in the recent case was controversial because rectal PEComa is a very rare neoplasm with no either definite standardized management or distinctive criteria for the malignant potentiality. Radical resection of the sigmoid and rectum with adjuvant chemotherapy was previously used for treatment of rectal PEComa with lymph nodes metastases [11]. Local excision using transanal endoscopic microsurgery was an alternative [7]. Based on being a small tumor involving 1/3 of the rectal circumference with no regional lymph node metastases, wider local excision was suggested as a proper choice. Recently, transanal endoscopic surgery is the best approach for wider local excision due to the capability to achieve a free safety margin with unblock resection of the very low located rectal tumor with its associated mesorectum. More Practically, the transanal wider local Excision of a very low rectal tumor of unknown malignancy behaviour in a child is a challenging procedure because of the absence of a small diameter operating TEO proctoscope. Using Kirwan grading [12], the patient was continent to gas, fluid and solid stool (grade one). The postoperative continence function was not affected by the use of the adult TEO platform. The long-term treatment outcome of PEComa remains vague due to limited evidence from case reports.