Opinions and Controversies in Problem of The So-Called Idiopathic Scoliosis. Information About Etiology, New Classification and New Therapy Volume 12 - Issue 5

The biomechanical etiology of the so-called idiopathic scoliosis [adolescent idiopathic scoliosis (AIS)] was the subject of the author’s research from 1984 to 2009 in the Pediatric Orthopedic and Rehabilitation Department of Medical University in Lublin, Poland, and in years 2009-2018 in Out-Patient Orthopedic Clinic in Lublin. The basic observation about etiology, new classification and the rules of the new therapy and causal prophylaxis comes from the years 1995-2007.

Spine-Scoliosis (Literature 1-23): The etiology of idiopathic scoliosis was a secret over two thousand years. The biomechanical etiology of scoliosis has been found and described in years 1995 - 2007 (T. Karski, Lublin). The first observations was in program of research of authors in 1984, during the scholarship stay in Invalid Foundation Hospital in Helsinki, Finland. Over there the first “new clinical symptoms of scoliosis” in the region of pelvis and hips were observed.

In the years 1985-2018, 2500 patients mostly in age 5-18 were observed and treated. There was a small group of older patients (60-80 y.), coming with the problem of pain. The older people who were mostly diagnosed with scoliosis, were in the new classification in the second or the third group of the deformity (see next chapter-classification) [1-5].

a) 1995 - The first lecture about the biomechanical etiology of scoliosis was during the Orthopedic Congress in Szeged, Hungary.

b) 1997-Discovery that all children with scoliosis have the habit to stand ‘at ease’ only on the right leg. The same observation is in adults. Standing on the right leg is permanent and because of this, it is the cause the lumbar left convex curve [6,7].

c) 2001-Describing the new classification - two groups and three types of spine deformities: (1) “S”1st epg (epg-etio-pathogenesis) scoliosis-connection with “standing on the right leg” and with “gait”, (2a) “C” 2nd/A epg scoliosis and (2b) “S” 2nd/B epg scoliosis. Both types (2a) and (2b) are connected with etiological influence of “standing”.

e) 2006-Precise information about the “model of movement of hips” and the types of scoliosis in three groups and four types.

I. Anterior tilt of pelvis,

II. Extension contracture of the trunk even in small children,

g) In 2007 the author was able to answer the question why blind children do not have scoliosis. Explanation: the children stand on both legs, what is safe and proper, walking without lifting of legs, without possible compensation movements of pelvis and spine-see-1st and 3rd type of scoliosis.

“The model of hip movements” and the types of scoliosis was presented in Figures 1 & 2. When movements of hips, are equal - scoliosis never develops. No biomechanical pathological influence acts on the spine. The growth of spine is proper. When movements of hips are asymmetrical, especially if the adduction in straight position of the right hip’s joint is limited - there is an input to develop scoliosis in the three groups and four types.

Figure 1: The model of hip movements” and the types of scoliosis. 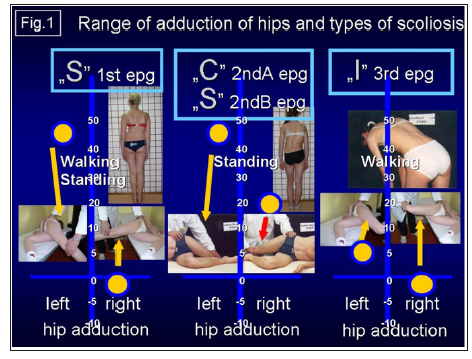 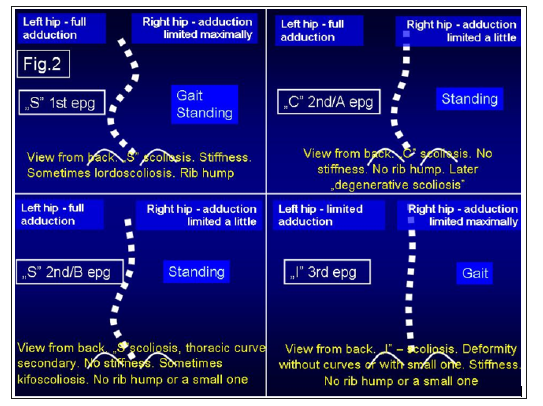 a) Scoliosis “S” 1st etiopathological group (epg) - double curve. Stiff spine (3D). Rib hump on the right side of the thorax. Connection with gait and standing at ease’ on the right leg [12,13,15].

b) (2a) Scoliosis “C” 2nd/A epg-one curve-lumbar left convex. Spine flexible (1D or 2D). Connection with standing „at ease’ on the right leg only.

c) (2b) Scoliosis “S” 2nd/B epg-two curves, (2D or 3D). Connection with standing ‘at ease’ on right leg and additionally with laxity of joints and /or harmful previous exercises. In these two types of scoliosis - 2nd/A and 2nd/B - the spine is flexible [14,16].

d) Scoliosis “I” 3rd epg. Deformity has the form of a stiff spine, (2D or 3D). No curves or small ones. The cause is gait only. Such “spine deformity” was till 2004 never classified as “scoliosis”.

Information about possibility of causal prophylaxis and new treatment of scoliosis. The principles of the new treatment for all patients are the following

a) No more standing “at ease” on the right leg,

b) Sitting in a relaxed position,

d) Stretching and bending exercises are especially important for the spine. The main aim is to achieve by physiotherapy methods, the symmetry of movements of both hips, symmetry of position of pelvis, to remove the anterior tilt of pelvis and to receive full-flexion, deviation and rotation of the spine. The prophylactic exercises should be introduced at the age of 5-6.

e) Flexion exercises for the spine-to the front, to the left, to the right. Here I would like to mention, such exercises for the first time have been recommended in Poland by Prof. Stefan Malawski. His therapy was profitable, however the etiology has not been found at that time [17,18].

g) It is especially important to receive the full movement of the right hip as the new, important aim of physiotherapy. To this end-stretching exercises should be done permanently, every dayuntil the full range of movement of right hip and spine will be achieved. In the therapy of “back pains syndromes” in adult patients it is important not to stand on the right leg-because such standing enlarges the “degenerative scoliosis”.

Discussion and Comments to the New Knowledge About Scoliosis

First, my lectures about biomechanical etiology of scoliosis were given abroad-in Hungary, then in Germany, England, Italy, Spain, during IRSSD Meetings, during SICOT congresses (1995- 2018). On the contrary in my country, in two Orthopedic Congresses in Poland-the new knowledge about scoliosis was not admitted. In the period of ten years (1995 till 2005) my publications were being blocked [19,20]. I could publish only abroad-in Germany, Hungary, Czech Republic, USA, Canada. My first publication was in Germany in 1996. The first publication in English was in material of International Research Society for Spinals Deformity (IRSSD) - Meeting in Athens in 2002. Till now, in Poland the therapy of children with scoliosis, in many orthopedic and rehabilitation centers has been incorrect and wrong. Very often, even in last years, I am asked by parents to consult patients with “iatrogenic huge deformity” after improper therapy. “The causal prophylaxis of scoliosis” in Poland has not been introduced, what is possible and very simple Some years ago during discussion about scoliosis, Prof. John Sevastik from Stockholm told me (citizen after Hippocrates-460-380): “There are in fact two things: science and opinion. The former begets knowledge, the latter ignorance”.

The problem of scoliosis in the world, and also in Poland, has been “ignorance” till now. Here I present the letter from Professor Hans Mau (2003)-about the “status of knowledge about etiology of scoliosis” [21,22] and about “proper line of research on scoliosis in Lublin” (Figure 3a & 3b).

a) In all years of observations (T Karski 1984-2018), it was confirmed the biomechanical etiology of the so-called idiopathic scoliosis.

b) Development of scoliosis and type of spine deformity is connected with pathological “model of hips movements” (T Karski) and function-“standing ‘at ease’ on the right leg” and “walking”.

c) The restricted range of movements in the right hip is connected with the “Syndrome of Contractures and Deformities” according Prof. Hans Mau.

d) Every type of scoliosis starts to develop at the age of 2-3.

e) There are three groups and four types of scoliosis:

IV. “I” scoliosis 3rd epg, 2D or 3D. Clinically only stiffness of the spine. Causative influence: gait. The clinical symptom of this deformity is - sport problems in young age and “permanent pain” in adults.

g) The causal prophylaxis of scoliosis is possible and should be introduced in every country.

h) The rules in prophylaxis-are-standing ‘at ease’ on the left leg, sitting relax, sleeping in embryo position, active participation in sport - especially in karate, taekwondo, aikido and other similarly.

I would like to express my many thanks to Honorata Menet for correction of the article.