In patients with haemophilia (PWH), frequent bleed events (2–3 in a six-month period) at the same joint site are associated with chronic inflammation of the synovial membrane and reduced mobility due to the increased volume of fluid within the joint [1]. Joint bleeding generally occurs when children begin walking (median age 20 months), which suggests that mechanical forces play a role in initiating a bleed [2]. The synovial membrane of PWH appears to adapt to the presence of iron. Chronic synovitis contributes significantly to joint deterioration in the long-term and leads to chronic pain, disability, and arthropathy [3]. This induces synovial changes such as inflammation, hyperplasia, and angiogenesis. If only one bleed occurs these changes can be transient, as the cartilage regenerates if chondrocytes remain vital. Only the vascular changes are irreversible [4]. The pathogenesis of cartilage damage caused by bleeding is not yet fully understood. Blood-derived mononuclear cells produce cytokines such as interleukin (IL) 1b and tumor necrosis factor (TNF). These cells activate synoviocytes, stimulate chondrocytes, and induce biological activities such as hyperplasia with intense neovascularization and inflammation of the synovial membrane [4, 5]. This hypervascularization induces a recurring cycle of persistent hyperplasia and inflammation. The cartilage is damaged as a result of contact with blood and of synovial changes, and cartilage matrix components deteriorate due to synovial production of pro-inflammatory cytokines and proteases.

All the cytokines and growth factors released by PRP favor resident stem cell recruitment to the site of injury. At the site, these cells secrete additional growth factors and anti-inflammatory cytokines. The recruited stem cells can differentiate into cartilage and replace injured cells [14]. Growth factors and proteins have been found to take part in regulating articular cartilage, stimulating cartilage matrix synthesis, and counteracting the effects of catabolic cytokines such as interleukin-1 and tumor necrosis factor-α [15]. Numerous clinical trials indicate that PRP is a promising treatment for cartilage injuries and joint inflammation, but its role in cartilage repair is not yet fully understood [14]. The aim of this study is to show the results of treatment of chronic synovitis in PWH by means of intra-articular PRP injection at one-year follow-up.

Thirty-nine patients from the Foundation of Haemophilia with chronic synovitis in 66 joints were treated and followed for one year at the Juan A. Fernandez General Hospital in Buenos Aires, Argentina. Thirty-eight patients were haemophilia type A and one type B. Thirty-three patients were severe (84.6%), and 6 were moderate (15.4%). Four patients with five synovitis joints (3 knees, one ankle and one elbow) had inhibitors. Three patients had factor VIII inhibitors and one had factor IX inhibitor. This complication represents 10.25 % of the study population (Table 1). Mean age was 25 years (8-48). The affected joints were: 38 (57.6%) knees, 15 (22.7%) elbows and 13 (19.7%) ankles. Twenty–one (53.84%) patients had synovitis in only one joint, 17 (43.6%) had synovitis in two joints, and one (2.56%) patient had 3 joints with synovitis. The study followed the guidelines of the Declaration of Helsinki and was approved by the hospital´s ethics committee. All patients provided written informed consent.

Patients with grade 5 arthropathy (osseous ankylosis) according to Arnold and Hilgartner´s radiological classification and clinical exam. Patients with loss of the skin or active infection in the joint were also excluded. The following parameters were evaluated: Visual Analogue Scale (VAS), number of Bleeding Episodes in the last 3 months (BE), Haemophilia Joint Health Score (HJHS) for each affected joint, Range of Movement (ROM) and Joint Perimeter measure (JP), before treatment, 3 months, 6 months and 12 months after treatment. The knee joint perimeter was measured at two points: K1 in the center of the patella, and K2 3cm above the top edge of the patella. The perimeter of ankle and elbow joints were measured at only one point. Elbows were measured around the medial and lateral epi-condyle and for ankles just distal to the tip of the malleolus [16]. Clinical evaluations were performed by the same interdisciplinary team of haematologists, traumatologists, and physiotherapists each time.

Preparation procedures were identical to those in our previous study [17]. In brief, autologous intravenous blood was obtained using a BD vacutainer ® collection set. After blood extraction each patients received their substitutive factor, a bolus dose of FVIII/FIX to bring the factor level to 50%. They continued to receive enough factor to maintain a level of 30% in the following two days. In patients with inhibitors, an initial dose of recombinant FVIIa (rFVIIa) 150- 200μg/kg immediately before the injection was infused, followed by three doses of 90μg/kg every 3 hours. Then, a high daily dose (200-300μg/kg) was given the following three days. The extracted blood was centrifuged for 8 minutes at 1600 rpm (Presvac® centrifuge, Bs. As.- Argentina) : Prevac® centrifuge). PRP was separated under sterile conditions and placed in a syringe. One ml of the concentrate was reserved for counting platelets in a Coulter LH 750 Analyzer (Beckman Coulter Inc, USA). To perform the injection, the joint area was embrocated with iodinepovidone and covered with a fenestrated sterile drope. A mean volume of 4 ml of fresh PRP was injected into the joint cavity. Joint aspiration was done before PRP injection if required. No antibiotic prophylaxis was administrated. Patients can take paracetamol if needed. Nonsteroidal anti-inflammatory drugs (NSAIDs) interfere with platelet segregation and function [18]. It is an outpatient procedure, so patients can continue with their regular activities after treatment.

Statistical analysis of the data was performed using the Statistical Package for the Social Sciences (SPSS). Wilcoxon test for paired samples and the Friedman test with Bonferroni correction were performed. Fisher´s exact test was used to evaluate the effect of treatment. It compares the same parameters before and after treatment. ANOVA was also used. A p-value below 0.05 was considered statistically significant. 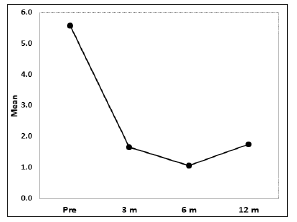 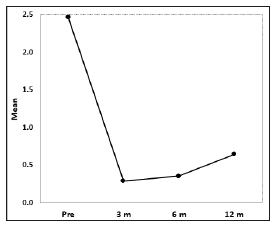 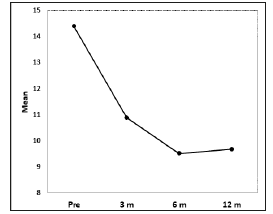 Table 2: Joint perimeter measure before and after treatment.

Platelets contain growth factors which regulate the tissue healing process. This study included: 38 (57.6%) knee, 15 (22.7%) elbow and 13 (19.7%) ankle joints. No complications were observed after blood extraction, and no joint bleeding occurred as a result of intraarticular PRP injection. The VAS score showed a statistically significant decrease in pain, throughout the entire study period. The number of BE diminished significantly in the third month, and continued bellow pretreatment levels a year. Only three (4.54%) joints had been free of bleeding episodes before treatment. Fiftyfour (81.8%) of joints were free of bleeding episodes three months after treatment, 52 joints (78.78%) six months after treatment, and 43 (65.15%) one year after treatment. The HJHS was also significantly lower after treatment. Ankle, elbow and K2 joint perimeter decreased significantly before and after treatment. The change in K1 perimeter was not statistically significant before and after treatment. Knee joint perimeter was related to the location of the synovial fluid. The proliferation of synovial tissues occurs primarily in the suprapatellar region so K2 perimeter is more sensitive to changes in the volume of synovial fluid, and the inflammation of synovial membrane. Although parameters as BE, VAS, JP and HJHS remain below pretreatment levels they are slightly higher at twelve months than at six months. Repeating the PRP injection once a year could help to avoid progression of these clinical parameters and protect the joint.

We recommend the use of PRP for synovitis treatment since platelets secrete growth and coagulations factors, adhesion molecules, cytokines, chemokines and integrins. We believe PRP is a useful tool to treat chronic synovitis in PWH. After activation, concentration of growth factors increases significantly. Anabolic cytokines like transforming growth factor-β, IGF, basic fibroblast growth factor and PDGF promote and protect chondrocytes and stimulate chondrocyte and mesenchymal stem cell (MSC) proliferation. These stem cells can differentiate into chondrocytes and diminish the catabolic effects of inflammatory cytokines, such as IL-1β [19]. Platelets also secrete inflammatory mediators and modulators, and anti-inflammatory cytokines like IL-1, tumor necrosis factor (TNF) receptor (sTNF-R) I and II, IL-4, IL-10, IL- 13, and interferon [20]. IL-1ra inhibits the bioactivity of IL-1 by blocking its receptors. TNF-RI and sTNF-RII can bind to free TNFα preventing signal transduction [21]. IL-4, IL-10, and IL-13 can increase IL-1ra production and reduce TNFα [22]. PRP also releases pro-inflammatory cytokines such as IL-1α, IL-1β, TNFα, IL-6, IL-8, IL-17, and IL-18, but their concentrations are much lower than those of anti-inflammatory cytokines.

Regulation of joint inflammation explains how PRP treatment reduces pain favoring patient improvement. PRP injections are safe. No adverse events have been reported in the literature, and there are only few reports of immediate pain and swelling [29,30]. Studies agree on the clinical benefits of PRP injection as compared to saline solution or viscosupplementation injection [24,31,32]. In vitro and preclinical studies show PRP specific chondrogenic growth factors: PDGF, which may stimulate proliferation and collagen synthesis, TGF-beta, which may enhance chondrocyte synthetic activity, matrix production, and cell proliferation and decrease the catabolic activity of IL-1, and FGF which promotes different anabolic pathways. The anti-inflammatory and anti-apoptotic effect of PRP inhibits apoptotic related factors [33-35].

Storage procedures are key. Freeze PRP alters platelet function and lifespan, and negatively change the growth factors release pattern favoring the accumulation of pyrogenic cytokines and increasing the risk of bacterial proliferation. We use fresh PRP and inject it immediately after preparation. This is very important for successful treatment [12]. Several studies have shown the potentially beneficial effect of PRP in promoting cellular anabolism and tissue regeneration. These studies provide the rationale for the application of platelet concentrates in humans [8,23]. The mechanism of action of PRP is not yet fully understood, several aspects must be studied to optimize the procedure and improve the potential of this biological minimally invasive approach.

All patients benefitted from PRP therapy. The greatest improvement was observed at 3 months evaluation. At 6 months, results are quite similar, but 12 months after treatment BE, VAS, JP, HJHS began to increase. We believe that a second PRP injection could help to protect patient’s joint health.