Ajuga decumbens Thunb is an annual herbaceous flowering plant, distributed in some parts of Asia. It is adequately used as folk medicines for the treatment different ailments. It contained important bioactive compounds (diterpenoids, iridoid glycosides, phytoecdysteroids, flavonoids and sesquiterpenoids) which made it to possess a wide spectrum of biological activities such as anti-cancer, antioxidant, Antifeedant, antibacterial, anti-inflammatory, antihyperlipidemic, anti-cholinesterase and cytotoxicity activities. This review gives an update about its phytochemicals and biological activities.

The genus Ajuga, belongs to the family of Labiatae, commonly known as “Bugleweed or Ground pine” [1] which distributed mainly in the temperate regions Europe, Asia and Africa [2] where most its species can be found, but only two of Ajuga species are available in southeastern Australia [3-4]. Pharmacological studies revealed that Ajuga possessed, have been used as anti-inflammatory agents, anti-cancer, astringent, anthelmintic, hypoglycemic, febrifuge diuretic, insecticidal properties and antifungal [5-11]. Ajuga decumbens is used as a folk medicine for the treatment of all kinds of ailment in ancient, most especially in China and Japan [12-15]. This review shows previous research on bioactive compounds of A. decumbens and biological activities of both the extracts and isolated compounds from this medicinal plant.

Distribution of A. decumbens

The Morphology of Ajuga decumbens Thunb

A. decumbens is an annual herbaceous flowering plant, which grow to 10-30 cm height with white villous on the young parts of the stem, numerous basal leaves longer than stem leaves, floral leaves are bractlike and lanceolate, with funnel- shape calyx and corolla tubular, straight, basally slightly swollen. Flowering starts from March and lasts to the end of July. The fruiting season starts from May and continues till November [16].

Bioactive Compounds Isolated from A. decumbens

There are bioactive compounds isolated from A. decumbens, including diterpenoids, iridoid glycosides, triterpenoids, sesquiterpenoids, phytoecdysteroids, withanolides and other essential compounds, which are responsible for its effective biological activities.

Figure 1: Distribution of A. decumbens. 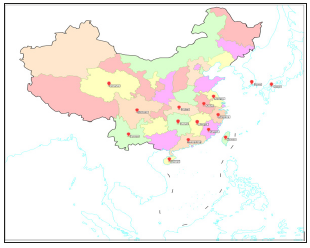 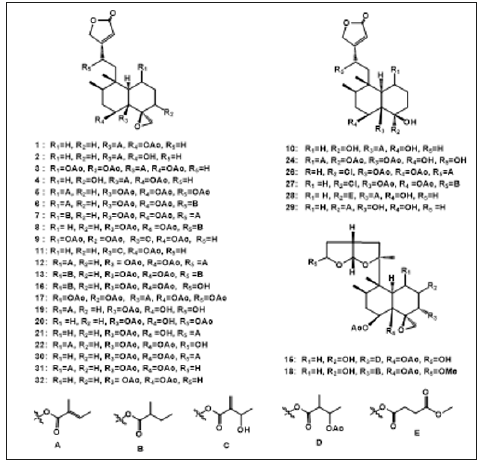 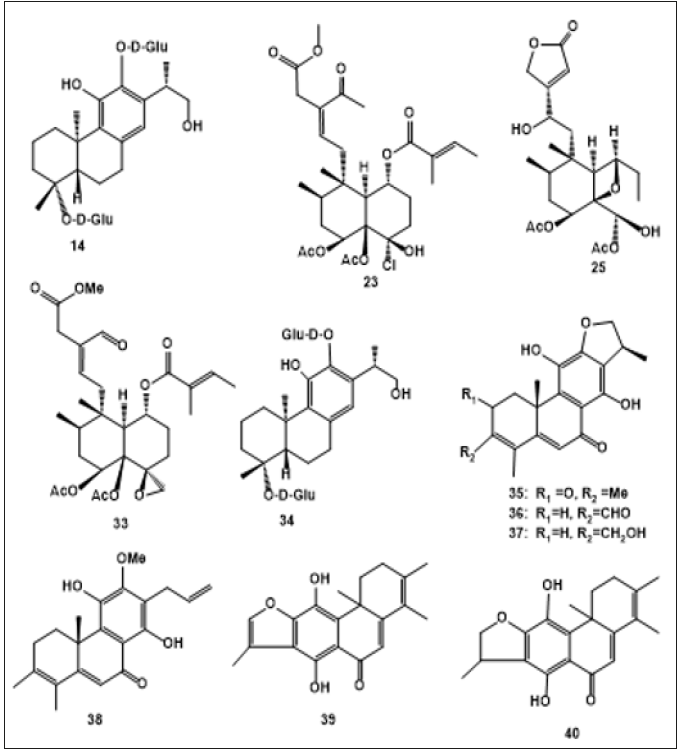 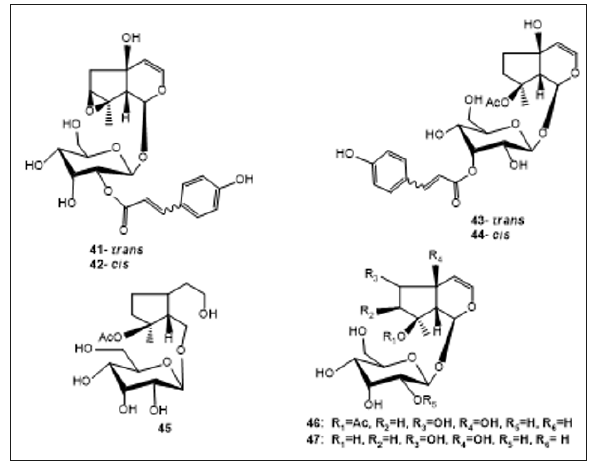 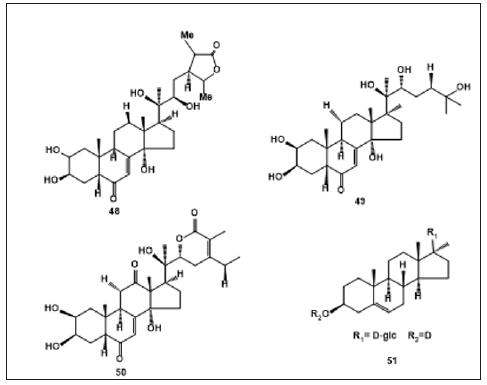 Anti-Cancer Activity: Takasaki et al. conducted in vitro inhibitory effects of the isolated compounds (Ajugaside A (14), Reptoside (45), 8-O-acetylharpagide (46), Harpagide (47), Galactosylmartynoside (62), Martynoside (63) and Darendoside B (64) on Activation of the Epstein–Barr virus transcription factor BZLF1 by 12-O-tetradecanoylphorbol-13-acetate induced phosphorylation were evaluated, the results revealed that 8-O-Acetylharpagide (46) displayed the strongest inhibitory effect on EBV activation induced by TPA [27-30]. 8-O-acetylharpagide (46) also displayed inhibitory effect on hepatic carcinogenesis using N-nitrosodiethylamine (DEN) as an initiator and phenol-barbital (PB) as a promoter [31-37]. Extracts of A. decumbens displayed anticancer and antimetastatic effects towards breast cancer through regulating the expression of MMPs and TIMPs [38]. Ajudecumin A (35), Ajudecumin B (36) and Ajudecumin C (37) showed inhibitory effect on the proliferation of human breast cancer MCF-7 cells [18]. High and moderate dosage of total flavonoid of A. decumbens significantly lower the expression of serum Interleukin-1(IL-1) and Tumor necrosis factor alpha (TNF-α), When compared with control [39]. Water extracts of A. decumbens significantly inhibited the increase of HepG2 cells in a dose-dependent manner [40]. Wang et al., reported that A. decumbens combined with Poria cocos have the ability to inhibit breast cancer cell invasion by targeting the expression of Mitogen-activated protein kinase (MAPK) and Epithelial-Mesenchymal Transition [41]. Iridoid in A. decumbens was investigated on the metastasis of invasive breast cancer cells and its related mechanism. The result showed that A. decumbens inhibited breast cancer cell invasion by suppressing the MAPK/ERK pathway as well as reversing the EMT [42,43] (Figure 6).

Antifeedant Activity: Ajugapitin (15) which is also known as Clerodendrin D was discovered from the leaves of A. decumbens as a feeding stimulant for Athalia rosae ruficornis [23]. Min et al. isolated four Diterpenoids (Ajugacumbins A, B, C and D) from the ethanol extract of A. decumbens, these isolated compounds displayed inhibition against the growth of insects [19]. Ajugacumbins E (9) and Ajugacumbins F (10) from A. decumbens showed insecticidal activities [21]. Ajugacumbins G (11) from this plant also exhibited growth-inhibitory activities against insects [22] (Figure 7). 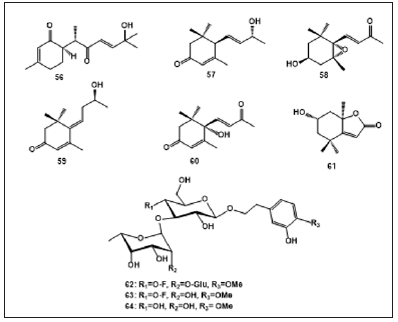 Anti-hyperlipidemic Effect: Xiaoming et al. reported that both the water and alcohol extracts of A. decumbens significantly showed reduction in the lipid levels in the blood, by administering the extracts on hyerlipemia mouse model [44].

Antivirus Activity: Takasaki et al. reported that 8-acetylharpagide (46) among other compounds isolated from the whole plant of A. decumbens showed the strongest inhibitory effect on Epstein-Barr virus activation induced by 12-O-tetradecanoylphorbol-13-acetate [30]. Water extract of A. decembens at the range of 750-1500 mg/ml concentrations exhibited in vitro inhibition on infectious Bronchitis virus [45]. Extract from the whole plant of A decumens possessed potent antiviral activities against respiratory syncytial virus (RSV) with IC50 of 131.6 μg/ml [46].

Anti-cholinesterase Activity: Xu et al. reported that ethylacetate extract of A. decumbens showed high inhibition to acetylcholinesterase with IC50 of 0.0997mg/mL, it was concluded that the inhibition was possibly due to the flavonoids, which exist as the main chemical composition in A. decumbens [50].

Antioxidant Activity: decumbens showed the therapeutic effects on Mesangial Proliferative Glomerulonephritis (MsPGN) in rats, by reducing the urinary protein in the rats when it was compared with Triptergium Wilfordii Polyglycosidium (TWP) group [51]. Nan also reported that total flavonoids of A. decumbens reduced the damage of free radicals by increasing Superoxide dismutase (SOD), lowering malondialdehyde (MDA) and inhibition of lipid peroxidation of the induced chronic serum sickness glomerulonephritis rats [52].

A. decumbens is extensively used as traditional medicine for curing different ailments. Previous studies showed that both the isolated compounds and extracts possessed a wide spectrum of biological activities, such as anti-cancer, antioxidant, antifeedant, antibacterial, anti-inflammatory, antihyperlipidemic, anticholinesterase and cytotoxicity activities. All these pharmaco dynamic basis supported the use of A. decumbens as traditional medicines. However, although some structures of compounds were isolated and the relevant biological activities were tested, more compounds can be discovered and the medicinal values also need to be examined, such as analgesic, anthelmintic, cardioprotective and hypoglycaemic effects. In vivo experiments and toxicity of isolated bioactive compound and extracts should be overemphasized in order to be saved from consumptions. Researchers should focus on identification and quantification the bioactive compounds responsible for each biological activity that A. decumbens displays. There should adequate studies on elucidation of the molecular mechanisms underlying the activity of these bioactive compounds, which can lead to use of this plant extracts for drug development.

This work was financially supported by the National Natural Science Foundation of China (21875252) and the Project of The Plan of Xiamen Science and Technology (3502ZCQ20171000).