Paracoccidioidomycosis is a systemic mycosis originating in Latin America and endemic in some regions of Brazil. It occurs mainly among rural populations, predominantly affecting males with age about 30 and 60 years old. It is infrequent below 14 years old. The etiologic agent is a thermodymorphic fungus denominated Paracoccidioides brasiliensis. The infection occurs by inhalation the fungus spores, initially involving the upper airways and the lung. Due to the hematogenous or lymphatic dissemination, the lymphatic system, the adrenal glands, the bones, the digestive tract and the central nervous system can also be affected. Imaging methods, especially CT and ultrasound, allow a better evaluation of the alterations found in the disseminated disease, which in most cases are nonspecific, and may simulate both neoplastic lesions and chronic infections, and are often indistinguishable from tuberculosis.

The definitive diagnosis was obtained through a lesion tissue biopsy that demonstrated infection by the fungus. In this case report, paracoccidioidomycosis had an unusual presentation in a 6 years old child with non-specific gastrointestinal symptoms associated with palpable abdominal mass. Ultrasonography and computed tomography showed lymph node enlargement in the abdomen and pelvis. The diagnosis was obtained by pelvic lymph node biopsy that demonstrated the infection by Paracoccidioides. The treatment was made with amphotericin B for 28 days during the hospital internment. After clinical and radiological improvement, she was discharged from hospital with Itraconazole for another 28 days.

Paracoccidioidomycosis is a systemic mycosis described by Adolfo Lutz in 1908, also called Lutz’s disease, South American blastomycosis, Brazilian blastomycosis, Lutz Splendore-Almeida disease and Lutz’s mycosis, whose etiologic agent is a thermodymorphic fungus denominated Paracoccidioides brasiliensis. It originates in Latin America, and its highest incidence is recorded in South America, notably in Brazil, Argentina, Colombia and Venezuela. In Brazil, the disease is endemic in the states of São Paulo, Rio de Janeiro, Minas Gerais, Rio Grande do Sul and Mato Grosso [1], mainly among rural populations, affecting males about 30 to 60 years-old. The annual incidence in rural endemic areas in Brazil ranges from 3-4 new cases / 1,000,000 inhabitants to 1-3 new cases / 100,000 inhabitants [2]. It is considered the third cause of death by chronic infectious disease, resulting in a mortality rate of 1.65 cases / 1,000,000 inhabitants.

The incidence of paracoccidioidomycosis is higher among men about 1:10-15 men. It is infrequent below the age of 14 years old, and there is no predominance of gender in this age group [2]. In the reported clinical case the disease affected a child under 7 years-old, which occurs very rarely, but the clinical findings were compatible with the acute / subacute childhood / adolescence form of the disease. Because it is not a common pathology in this age group, paracoccidioidomycosis did not enter as a differential diagnosis. The definitive diagnosis was made by lymph node biopsy that demonstrated fungal structures suspicious of Paracoccidioides. This study was approved by the committee of ethics in research of the Marcilio Dias Navy Hospital and was waived the application of the written informed consent. 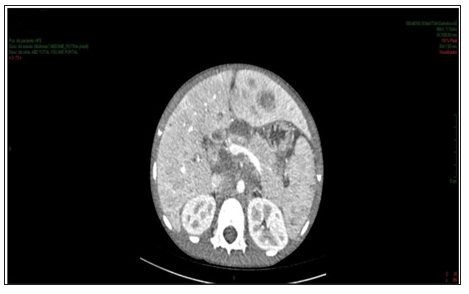 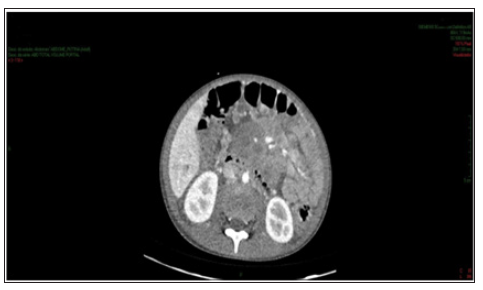 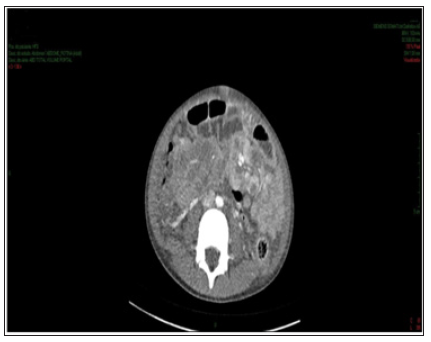 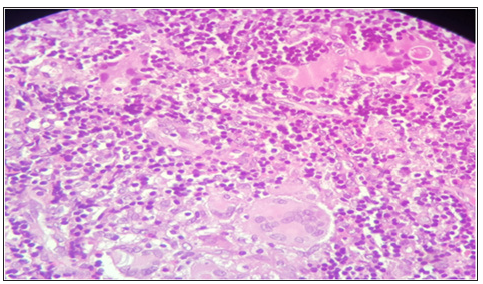 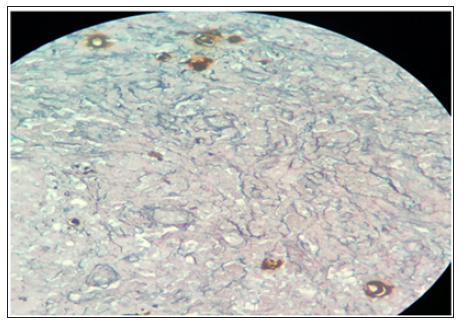 Patient started treatment with amphotericin B and after 15 days performed a new ultrasound of the abdomen to control treatment that showed persistence of lymph node enlargement near to the pancreas body, reduction of ascites, with a small amount of free fluid in the pelvic cavity, and a volumetric reduction of the linfonodal mass, located on the right flank measuring 4.7 x 4.0 cm (Figure 6). During the 41 days of hospitalization, the patient remained hemodynamically stable, presenting febrile peaks attributed to the intercurrence of infectious condition caused by K.pneumoniae and S.hominis being treated with cefepime and vancomycin. There were bilaterally microadenomegalies in the posterior cervical chain and right axillary adenomegaly, mobile, painless and elastic, with no other conditions. Patient evolved with clinical, laboratory and radiological improvement followed by hospital discharge. 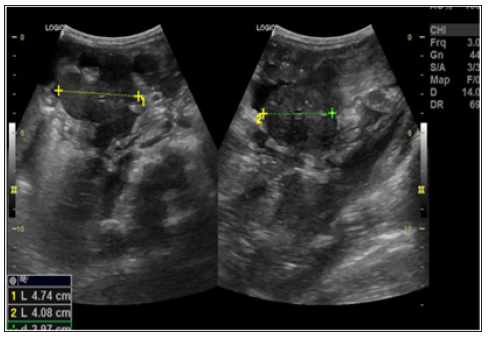 Paracoccidioidomycosis is a systemic mycosis originates in Latin America, and its highest incidence is recorded in South America, notably in Brazil, Argentina, Colombia and Venezuela. In Brazil, the disease is endemic in the states of São Paulo, Rio de Janeiro, Minas Gerais, Rio Grande do Sul and Mato Grosso [1] mainly among rural populations, affecting males aged between 30 and 60 years-old and related to agricultural activities. The etiologic agent is a thermodymorphic fungus called Paracoccidioides brasiliensis. The entrance of the fungus is the upper respiratory tract, through inhalation of fungus spores, being the upper airways and lungs, the first sites affected, but due to hematogenous or lymphatic dissemination, any organ or system of the body can be affected. The main organs affected are the lungs, lymphatic system, adrenals, bones, digestive tract and central nervous system. According to the Brazilian Consensus on Paracoccidioidomycosis, the disease is classified, according to clinical data and its natural history, into: paracoccidioidomycosis infection; paracoccidioidomycosis disease; acute / subacute childhood / adolescence; chronic form of the adult: unifocal and multifocal; and residual disease [3].

Very rarely, paracoccidioidomycosis occurs in children under 7 years old [4]. According to the literature, the acute / subacute clinical form of paracoccidioidomycosis represents 3-5% of the cases [2]. The main manifestations of this clinical form are superficial and deep lymph node enlargement, suppurative lymph node masses, hepatosplenomegaly and various symptoms (digestive, cutaneous and osteoarticular), as well as anemia, fever and edema, with rapid deterioration of the general state of the child. Pulmonary and mucosal involvement are rare [3,4]. The present case occurred in a 6-year-old child living in an endemic zone, who began the clinical condition with non-specific gastrointestinal symptoms and palpable abdominal mass. It presented intra-abdominal lymph node masses in the imaging exams; anemia (Hematocrit 30.6% and Hemoglobin 10 g%), hepatomegaly, fever, asthenia and an important decrease of the general condition in 48h. Nonspecific clinical manifestations such as fever, malaise, weight loss and asthenia are reported by 40 to 80% of children with mycosis [5].

Intestinal functional changes and compression by lymph node masses can cause abdominal pain in colic, sometimes simulating acute surgical abdomen, in addition to prolonged diarrhea, nausea, vomiting or intestinal constipation [4,6]. The child in the case had constipation and palpable abdominal mass, after a CT scan, the surgical abdomen was ruled out. In childhood, the estimated time between infection and onset of symptoms is a few months [7]. In children and adolescents, paracoccidioidomycosis often manifests as a moderate or severe systemic disease, with a relatively short course and death occurs in approximately 10% of cases [4]. The report of having been bitten by a tick 72 hours before the onset of symptoms made it thought like the initial diagnosis the various conditions transmitted by this arachnid, but the child did not show rashes, which is frequent in most tick-borne infections.

The main differential diagnosis of paracoccidioidomycosis is pulmonary tuberculosis, in some cases occurring simultaneously in the same individual, as well as, ganglionar tuberculosis, atypical mycobacterioses, sarcoidosis, collagenosis and other systemic mycoses such as histoplasmosis and coccidioidomycosis [4,8,9]. In the case reported, differential diagnosis was made with lymphoproliferative disorders and ganglionar tuberculosis due to lymph node involvement. The imaging methods used, computed tomography and ultrasonography, allowed a better evaluation of the alterations found, but these disorders were nonspecific, able to simulate both neoplastic lesions and chronic infections. The gold standard for the definitive diagnosis is the finding of the fungus in a tissue sample [9]. The Potassium Hydroxide (10% KOH) fresh smear test for direct fungus screening is also effective and cheaper for sputum examination, skin and mucosal scrapings, and ganglion aspirates [1].

The Grocott-Gomori Methenamine Silver (GMS) staining technique and the Periodic acid-Schiff (PAS) reaction are employed to evidence the fungus. Sabouraud agar culture should always be requested as a diagnostic method, although the growth of Paracoccidioides brasiliensis is slow [1,2]. The treatment of systemic disease can be done with amphotericin B. Trimethoprimsulfamethoxazole, itraconazole and other azole drugs may be used as alternatives. It is important to emphasize that the treatment of children and adolescents should be initiated ideally in the first months of the symptoms onset, when there is less visceral impairment and better prognosis [2,4,9,10]. The maintenance therapy is performed for a prolonged period of time, until cure criteria are obtained, aiming to reduce the risk of disease recurrence [9].

Paracoccidioidomycosis is a systemic mycosis endemic in some regions of Brazil. It is rare in the age group below 14 years-old, representing about 3-5% of cases. The main clinical manifestations in this age group are superficial and deep lymph node enlargement, suppurative lymph node masses, hepatosplenomegaly and various digestive, cutaneous and osteoarticular symptoms, as well as anemia, fever and emaciation, with rapid deterioration of the general state of the child. Pulmonary and mucosal involvement is rare. In this case report, paracoccidioidomycosis was present in a 6-year-old child with non-specific gastrointestinal symptoms associated with palpable abdominal mass. The diagnosis was obtained by pelvic lymph node biopsy that demonstrated the infection by Paracoccidioides. The treatment was made with amphotericin B for 28 days during the hospital internment. After clinical and radiological improvement, she was discharged from hospital with Itraconazole for another 28 days.