Breast Cancer: The Accuracy of The Paus in Detecting pN2 and Factors that Lead to the True- and False-Negative Results Volume 12 - Issue 5

About 70% of early breast cancer cases axillary lymph nodes are intact and surgical axillary intervention is unnecessary. There is an ongoing search for non-invasive methods to evaluate the status of axillary lymph nodes in order to prevent Axillary Lymph Node Dissection (ALND) or Sentinel Lymph Node Biopsy (SLNB). Patients with normal axillary physical exam and ultrasound rarely harbor a large nodal disease burden (pN2). There are studies suggesting that the Preoperative Axillary Ultrasound (PAUS) can replace SLNB when the axillary surgery is no longer curative and only biomarkers are important for adjuvant chemotherapy. The purpose of this study was to determine the accuracy and reliability of the ultrasound examination in detecting more than three metastatic axillary lymph nodes (pN2) and to assess the clinicopathological factors that lead to the true-negative and false-negative results of the ultrasound study. All patients underwent the PAUS as part of their staging. The nodal status assessed by PAUS was compared with histological findings. Determining pN2, the accuracy of PAUS was 91.2% and the NPV - 96.5%. False-negative results of PAUS were 18.7 %. On bivariate analysis, primary Tumor Size (T), the tumor spreading in blood and Lymphatic Vessels (LV), Tumor Grade (G) and patient age were found to be significantly different between true- and false-negative PAUS. We found that PAUS is sufficiently accurate to detect a heavy nodal disease burden and in most cases an additional axillary surgery can be avoided. PAUS findings may be less accurate in young age and in patients with T2, G3 and LV1.

The condition of Axillary Lymph Nodes (ALN) is the most important prognostic factor in breast cancer and is relevant to the choice of breast cancer treatment tactics [1,2]. There is a strong correlation between the number of damaged axillary lymph nodes and the risk of breast cancer regeneration [3]. Since 1994, Sentinel Lymph Node Biopsy (SLNB) has become a gold standard for assessing the status of the axillary lymph nodes. The sentinel lymph node is hypothetically the lymph node or group of lymph nodes that the primary cancer cells reach first. If the sentinel lymph node is intact, the probability that the tumor will not spread is high. According to several studies, when metastases are detected and the secondary Axillary Lymph Nodes Dissection (ALND) is performed, in 40-70% of cases, additionally removed lymph nodes were healthy [4]. When isolated tumor cells or micrometastases are found after SLNB, the removal of other lymph nodes in the axilla is not recommended [5]. A randomized ACOSOG Z0011 study was presented at the annual conference of the American Society of Oncology (ASCO) in 2010, which found that survival and the risk of recurrence was very similar in patients with T1 or T2 tumors and during SLNB 1 or 2 damaged lymph nodes who had ALND and those who did not [5].

About 70% of the early breast cancer cases have intact axillary lymph nodes and surgical axillary intervention is unnecesAbstractsary [6]. Although SLNB complications are rare and less damaged than ALND, this is a risky procedure. Several prospective studies (ACOSOG Z0010, NSABP B-32, ALMANAC) identified the incidence and frequency of SLNB complications: allergic reactions (0.1-1.0%), wound infection (1.0-10%), seroma (7.1 %), paresthesia (8.6-11%) and hematoma (1.4%) [7]. Accordingly, there is an ongoing search for non-invasive methods to evaluate the status of axillary lymph nodes in order to prevent ALND or SLNB [6]. In the guidelines of the European Union, Preoperative Axillary Ultrasound (PAUS) is a routine examination for all breast cancer patients with palpable or impalpable axillary lymph nodes [4]. It is possible to assess whether the lymph node is damaged by ultrasound (PAUS-positive) according to the morphological features of the axillary lymph node [7]. In different studies, the sensitivity and accuracy of the ultrasound examination varied between 23% to 87% and 67.9% to 90.2% [2,5,6-18]. One of the weaknesses in the ultrasound examination is the false-negative results (~21%) [15], but in the determination of metastases in three or more axillary lymph nodes, false negative tests are found to account for about 4% [2].

Symptoms of the disease are less favorable and the prognosis is poorer in patients who are PAUS- positive [4] versus patients who are PAUS negative and metastases were found rarely in more than three axillary lymph nodes [2]. There are studies suggesting that an ultrasound examination can replace SLNB when the axillary surgery is no longer curative and only biomarkers are important for adjuvant chemotherapy [7]. The purpose of this study was to determine the accuracy and reliability of the ultrasound examination in detecting more than three metastatic axillary lymph nodes (pN2) and to assess the clinicopathological factors that lead to the true-negative and false-negative results of the ultrasound study.

The present study is a retrospective analysis of the medical documentation of all newly diagnosed breast cancer patients between 1 January 2011 and 31 December 2012 in the Hospital of Lithuanian University of Health Sciences Kauno klinikos. The study included women (n=667) who underwent a preoperative axillary ultrasound examination. When normal-appearing or suspicious axillary lymph nodes were found during the ultrasound study, SLNB was performed. If there were definitely pathological axillary lymph nodes by ultrasound examination, an immediate ALND was performed or treatment started with neoadjuvant chemotherapy (these women were not included in the study). The criteria for assessing the lymph nodes are shown in Table 1. The cases of breast cancer found on both breasts were analyzed as two separate cases. Rejection criteria: Neoadjuvant chemotherapy, recurrent breast cancer, non-invasive breast cancer, unexplored or poorly documented PAUS study. PAUS study data were compared to the results of postoperative histological examination. The study design is shown in Figure 1). PAUS was performed using an Acuson S2000 ultrasound unit with a 14MHz linear Siemens transducer. 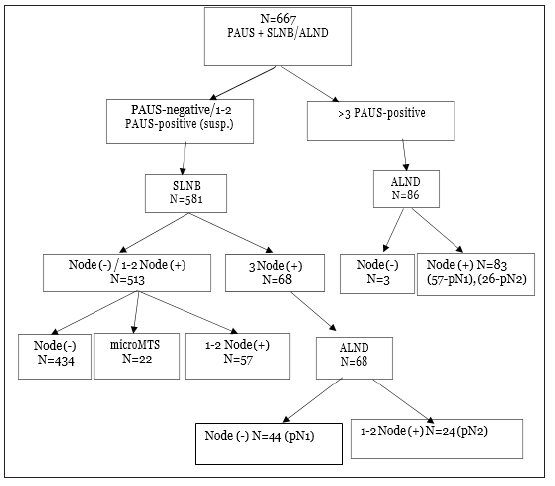 Statistical analysis was performed using IBM SPSS Statistics 24 package. Descriptive statistics methods were used to systemize the research data. The accuracy, sensitivity, specificity, Positive Predictive Value (PPV) and Negative Predictive Value (NPV) of the ultrasound examination were evaluated and the estimates of these characteristics were given along with their 95% confidence intervals. The Chi-square test was used to compare effects of clinicopathological factors and the correlation of outcomes from PAUS and SLNB pathology. The results were considered statistically significant if p< 0.05.

Table 2: PAUS true-false-negative and true-false-positive results according to patient and tumor characteristics. 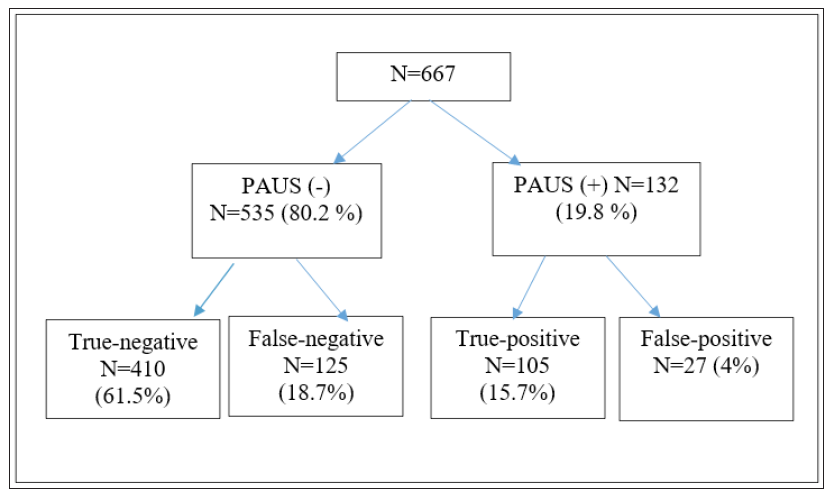 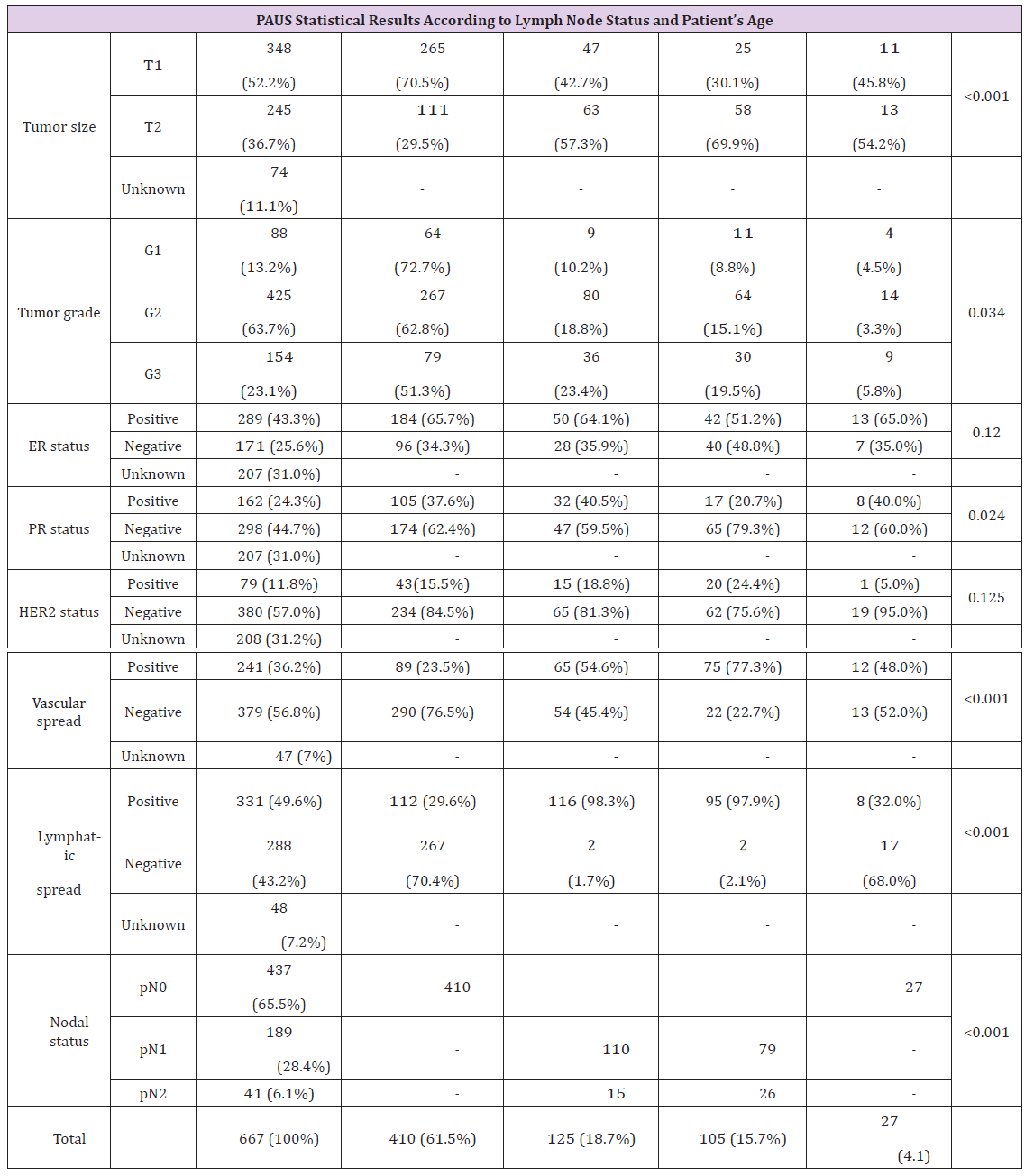 According to the literature, metastatic lymph nodes are detected in about 30-40% cases of newly diagnosed breast cancer [18]. In order to evaluate the status of axillary lymph nodes, all patients undergo surgical intervention (SLNB or ALND) to this day. Although SLNB is less risky than ALND, about 60-70% cases of newly diagnosed breast cancer are node-negative and axillary surgical intervention is unnecessary. In our study, metastatic lymph nodes were detected in 230 patients (34.5%), but in all 667 cases, either SLNB or primary ALND, or SLNB and secondary ALND were performed; however, for 437 patients (65.5%), axillary surgical interventions were unnecessary. In the guidelines of the European Union, PAUS is a routine examination for all breast cancer patients with palpable or impalpable axillary lymph nodes [4]. Recently, if there is definitely pathological axillary lymph nodes by ultrasound examination, neoadjuvant chemotherapy has been initiated. During the study period, our clinic had two possible solutions: either primary ALND or neoadjuvant chemotherapy; therefore, in 86 cases, primary ALND was performed. Patients with normal-appearing or suspicious lymph nodes on PAUS (n=581) underwent SLNB.

In the study by Abe and others (N=37), for the determination of pN2 or pN3, false-negative results of PAUS were found in 3% cases, and NPV was 96.7% [8]. Based on these results, it can be argued that the PAUS study is sufficiently precise in detecting a heavy nodal disease burden (pN2) and additional axillary surgery could be avoided in most cases. Perhaps in these cases, a PAUS study could replace the SLNB and these patients could avoid an axillary surgery, meaning that the surgery time would be shorter, and treatment costs and postoperative complications would be reduced. A large number of studies were performed to evaluate the diagnostic parameters of the PAUS: accuracy 67.9% to 90.2%, sensitivity 23% to 87%, specificity 76.9% to 100%, and NPV 60% to 89.2% (Table 4). In the study by Dihge et al., the sensitivity of PAUS was only 23% [5], while the study by Tillman et al. reported a sensitivity of 87% [10]. In our study, the PAUS study in all patients was not very sensitive (45.7%), but was very specific (93.8%), sufficiently accurate (77.2%) and had relatively high positive and negative predictive values (79.5% and 76.6%) (Table 3).

Most often, metastases were found in young women (60%), but the accuracy of PAUS was the lowest (53.3%), while metastases were found less often in the axillary lymph nodes in middle-aged and older women (33.4% and 32.9%), and the PAUS study was quite accurate (78.8% and 77.0%). These results suggest that the PAUS study can be more reliable for middle-aged and elderly women, but should be considered more cautiously when it is performed in young women (Table 3). Few studies have been conducted to analyze the causes of false-negative results of an ultrasound examination. Jalin’s study suggests that the negative results of PAUS study should be evaluated with caution when the tumor is larger (≥ T2), poorly differentiated (G3), or when tumor spreading in blood vessels and lymphatic vessels is detected, as that increases the probability of false-negative results [3]. Nwaugu’s study also suggests that the probability of false-negative outcomes increases when the tumor is larger and the tumor spreading in blood vessels and lymph nodes is diagnosed, but the tumor differentiation degree is not statistically significant [15]. In our study, false-negative PAUS results were found in 18.7% of cases (Table 5). 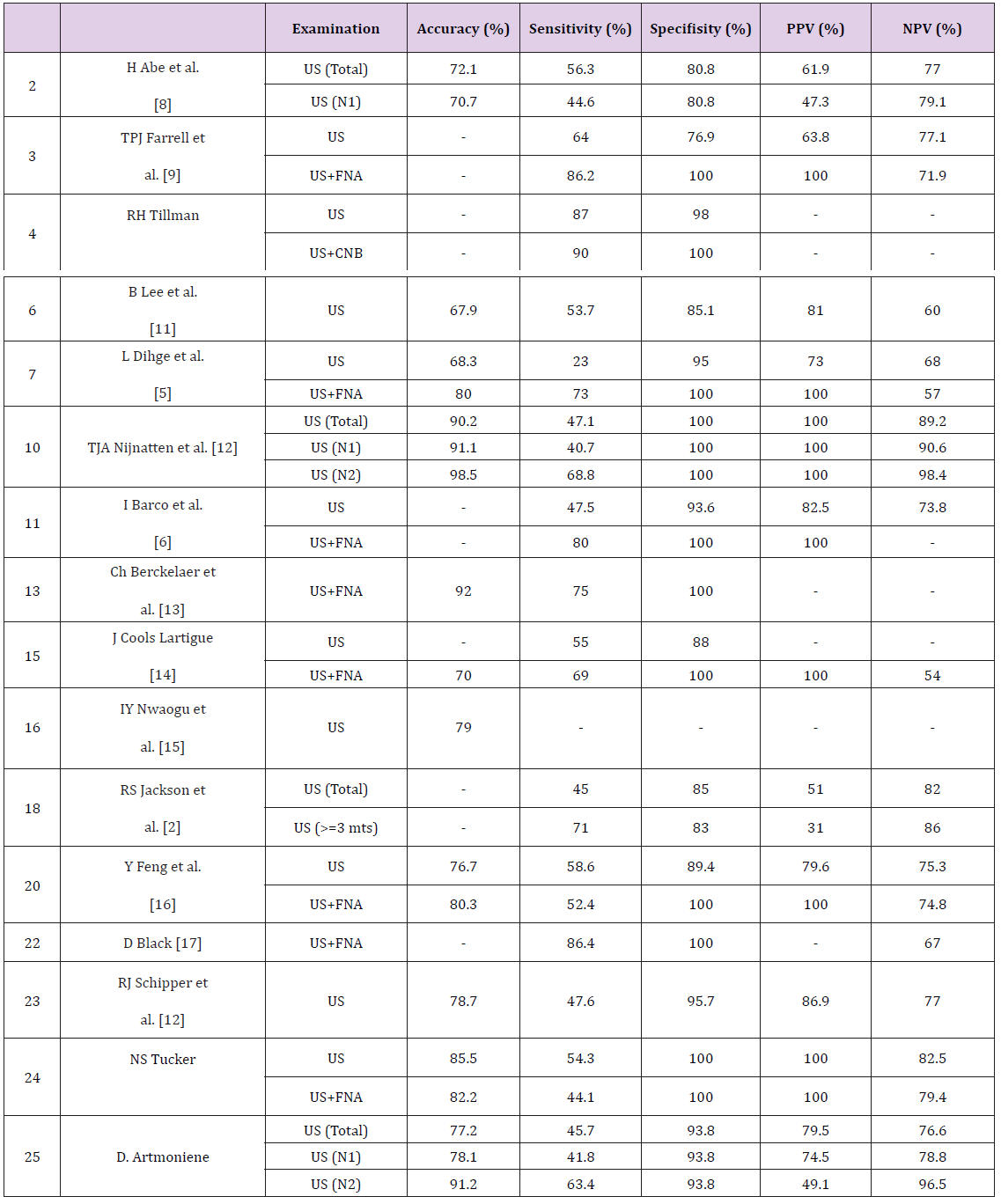 An ultrasound examination is sufficiently accurate to detect a heavy nodal disease burden (pN2) and an additional axillary surgery can be avoided in most cases. Ultrasound examination is more accurate and more sensitive to middle-aged and older women and the sensitivity of the young women’s ultrasound examination is rather low. In the middle-aged and elderly patients, when the tumor is small (T1), well-differentiated (G1) and the tumor spreading in blood vessels (V0) and lymphatic vessels (L0) is not detected, we can rely on PAUS study results and avoid SLNB. On the contrary, in the younger age group with larger (T2), poorly-differentiated (G3) tumors, and with the detection of tumor spreading in blood vessels (V1) and lymphatic vessels (L1), the probability of false-negative results is increased. Therefore, in these cases, the results of the PAUS study should be evaluated more cautiously. In PAUS-positive patients there is a greater possibility that the tumor will be more aggressive and more widespread, so these patients require more aggressive treatment of the axillary lymph nodes (operational or radiotherapy).