Halitosis (oral malodour) is a common problem, which creates severe social and relational difficulties. The most popular approach is to mask the smell, without considering the bacterial aetiology of the problem. The aim of this study is to demonstrate the efficacy of the administration of encapsulated Kluyveromyces marxianus B0399 by measuring the amount of VSC (Volatile Sulphur Compounds) with follow-up at 7 and 14 days. At the end of treatment, about 91% of patients did not present halitosis. The protocol did not consider any oral hygiene treatment. The drug is in capsule form with a shell. Therefore, results were achieved with a direct action on the intestine, not at an oral level. In conclusion, this study proves that, besides the rebalancing effect of probiotics in dysbiosis, there are many immunological implications on GALT (Gut Associated Lymphoid Tissue).

Halitosis is an organic disorder that manifests as unpleasant smell that comes from the mouth during respiration or during simple eloquence. Causes may result from imbalance of the oral cavity microbiota such as metabolic disorders, disturbed commensal microflora equilibrium, use of certain types of foods and some respiratory infections [1,2]. Everyone in life has suffered from halitosis, so much so that it has been discussed since Greek and Roman times. More detailed studies have only been done since the beginning of the last century. Miyazaki et al. [3] classified halitosis in three categories: physiological or transient bad breath, true halitosis and halitophobia or imaginary halitosis. Physiological halitosis is a situation normally present in specific situations and that goes away by itself, thus without a pathological significance. The so-called “morning breath” is a condition that is frequently presented in almost everyone. This is because during the night, the salivary flow is greatly reduced which leaves the mouth dry and smelly.

The same condition is found in people who speak a lot for work (teachers, informants, people involved in public relations, etc.). It can arise in a transient halitosis state in women during their menstrual cycle and in those who fast for long periods of time. In up to 90% of cases, real halitosis is instead a pathological condition that is a result of gastrointestinal or oro-laryngeal problems [4]. Halitosis can also be caused by some pharmacological therapies or bad habits like alcohol abuse and cigarette smoking, but also spicy food or onions, garlic and leek. Another predisposed category includes who has metabolic diseases like diabetes, hepatitis, kidney failure. Halitophobia is, lastly, a condition where the patient believes he or she has bad breath while not objectively experiencing that state. These types of patients need psychological support. The origin of the offensive smell derives from the degradation of peptides containing sulphur by Gram-negative anaerobes which produces the so-called VSC (Volatile Sulphur Compounds).

The most represented are hydrogen sulphate, methyl mercaptan, dimethyl sulphide, fatty and short-chain acids (butyric acid, valeric, isovaleric and propionic) compounds diamminic, poliamminic, indole (skatole, methylamine, putrescine, cadaverine) [5-7]. Hydrogen sulphate and methyl mercaptan constitute about 90% of the VSC present in breath. Hydrogen sulphate is mainly produced on the third posterior of the tongue. The methyl mercaptan and dimethyl sulphide are generated by the periodontal tissues. The condition necessary to produce these compounds is a basic environment. In fact, halitosis vanishes in the presence of sugar which activates the saccharolytic fermentation that, in turn, lowers the intraoral pH, inhibiting the metabolic activity of the proteolytic microorganisms responsible for halitosis. Some new strategies, to prevent oral diseases, are developing to equilibrate oral microbiota by administrating probiotics [5]. Probiotics have been found to be beneficial to host health. According to World Health Organization (WHO) probiotics are “live microorganisms which, when administrated in adequate amounts, provide a health benefit to the host”.

Their primary use in medicine has been for the management of intestinal tract problems. On the other hand, recent studies suggested a role of probiotics to promote oral health [8], in particular to reduce halitosis both in vitro and in vivo [6,8-19], but not all showed significant changes in the breath VSC concentration [20]. As one of the cause of halitosis coming from the disequilibrium of intestinal microbiota [4], in the present study the Probiotic Lactic Yeast K. marxianus B0399 was investigated to test its activity in reducing halitosis by acting on gastrointestinal microflora. K. marxianus B0399 is a strain belonging to a species naturally occurring in kefir and cheese [21]. It is a yeast closely related to Saccharomyces spp. [22], but it belongs to the genus Kluyveromyces, created by van der Walt [23]. K. marxianus B0399 was approved as a probiotic for both animal feeding [24] and human consumption [25], and its genomic DNA was completely sequenced [21]. It was demonstrated that K. marxianus B0399 remains viable after consumption surpassing the gastric barrier, adheres to the enterocytes of the intestinal epithelium, increases the concentration of good endogenous flora, in particular Bifidobacteria [26], and it regulates intestinal activity during antibiotic therapy, thanks to the yeast intrinsic resistance to bacterium-targeting antibiotics [27].

Furthermore, it has the capacity to produce enzymes such as β-galactosidase (reducing the effect of lactose intolerance in susceptible individuals) [28], β-glucosidase, inulinase, etc. It provides energy and promotes the growth of epithelial cells of colon by stimulating the production of short-chain fatty acids (SCFAs), such as acetate and propionate. It modulates the response of the immune system reducing the pro-inflammatory cytokine levels [26,27,29], being useful for mitigation of the effect of several diseases, such as irritable bowel syndrome [29,30].

A population of 115 patients of both sexes affected by halitosis, from ages 18 to 65, was considered. At the first visit, patients having cardiac problems, diabetic problems, immunosuppression, cancer, or already under conventional therapy for treating halitosis, and pregnant women were excluded. The selection of the group of patients was done at the end of rendering the sample as homogeneous as possible and excluding all the factors that could have falsified the result of the research. After the medical history interview, the patients were subjected to an instrumental survey of the breath to objectify the presence or lack of presence of halitosis quantifying it. The instrument used was a digital Halimeter connected to a computer that, through a specific software (Halisoft), monitored the levels of VSC present in the patient’s breath. The patient’s breath was tested three times within 10 minutes. For the first three minutes the patient breathed with mouth closed while the Halimeter tested the ambient air in order to have a comparison between environment VSC and the patient’s expired VSC.

After three minutes, the patients put the disposable testing tube on the back of the tongue with open mouth and breathed for 30 seconds. During this period the Halimeter recorded the amount of VSC present in the breath of the patient. This cycle was repeated two more times. At the end of the data recording, the quantity of VSC on the graphic survey was evaluated. The threshold value was fixed at 100 ppb. If the recorded value was higher, the presence of halitosis was considered. The selected patients were treated with BioSympa® containing the Probiotic Lactic Yeast Kluyveromyces marxianus B0399, as active ingredient, and serum made from goat milk, enclosed in capsules. The dosage was one capsule, containing 107 CFU of K. marxianus B0399, three times a day before main meals. A package containing 50 pills of the product was given free of charge to the patients suffering from halitosis. The test performed with the digital halimeter was repeated at a distance of 7 to 14 days after the first survey and the first therapy treatment. In this period, no dental or other operations were performed.

Bad breath is a common problem that can create social and relational difficulties. The role of probiotics in gastrointestinal tract is well-known, but in the last years they are investigated as an emerging resource in oral medicine. This concept prompts a new horizon on the relationship between diet and oral health. In fact, the present study shows that there is a correlation between intestinal microflora and halitosis. The administration of Biosympa® capsules, containing the probiotic lactic yeast K. marxianus B0399 at the concentration of 107 ufc/cps, three times per day, showed to be effective in halitosis problems. 91% of the subjects, in fact, at the end of the treatment were completely recovered. It is well-known [26,27,29] that K. marxianus B0399 increases the concentration of good endogenous intestinal flora and reduces the presence of pathogens and their associated VSC production. Based on our results, the administration of K. marxianus B0399 enclosed in capsules has been proven effective in halitosis by acting at the intestinal microbiome level. These data suggest the probiotic K. marxianus B0399 could be used to enhance oral benfits as well.

Further clinical studies to provide more in-depth knowledge of K. marxianus B0399 in oral health will be needed. In fact, it cannot be ruled out that it would be effective directly in the oral cavity influencing and rebalancing the altered microflora responsible of unhealthy oral environment as well.

115 patients were analysed. 35 of them were allowed to be included in the therapy because they showed VSC levels higher than 100 ppb, the fixed tresh-hold value. The average of the starting point value of VSC was 210,6 ppb (Figure 1). After 7 days the VSC values were reduced to 148.8 ppb. At the end of the treatment, after 14 days, in up to 91% of the cases, corresponding to 32 people, VSC values were lower than 100 bp. Only 3 people showed VSC level still higher than 100 pb at the end of the treatment. During and after the treatment with K. marxianus B0399 no collateral effects were reported from all patients.

Figure 1: Volatile Sulphur Compounds (VSC) values. The graph shows VSC values recovered before starting the therapy (T0), and after 7 (T7) and 14 days (T14) of Kluyveromyces marxianus B0399 (Biosympa® capsules) administration. After 14 days of the treatment, 91% of the patients reached VSC values lower than 100 ppb. 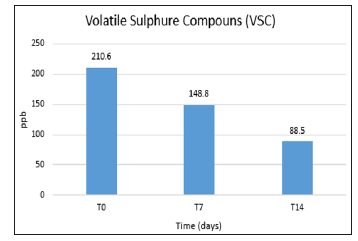