In this work, poly(dimethylsiloxane) (PDMS) / poly (hexamethylene oxide) (PHMO)-based thermoplastic polyurethane (TPU) nanocomposites incorporating nano-organo-hectorite were studied for biomedical application. This involved the investigation on the effects of oxidative and hydrolytic exposure on the performance of the host TPU and TPU-organohectorite nanocomposites through in vitro tensile and permeability tests (in water and hydrogen peroxide (H2O2). Results demonstrated that the presence of nanosized organically modified hectorite (nano-organohectorite), either in single or dual modification system affects the in vitro tensile properties, hydrolytic and oxidant permeability of this TPU. Specifically, the TPU incorporating with the most hydrophobic nanofiller (organohectorite surface modified with 75% dimethyldioctadegylamminium chloride (DODMAC) / 25% choline) exhibits the largest increment in the modulus of elasticity, retention in water and hydrogen peroxide (H2O2) permeability upon four weeks of exposure at 37 °C due to enhanced compatibility between the nanofiller and the hydrophobic PDMS soft segments.

The preliminary studies on the in vitro mechanical properties was carried out as a first step towards predicting the potential improvements in long-term in vivo performance of the TPU nanocomposites for long term implant applications. The test samples were conditioned in the environmental chamber containing H2O2 solution for 4 weeks before proceeding to the tensile test. The tensile test was performed according to ASTM D638 method with ten replicates of dumbbell sample from each material. Mean values of tensile strength, Young’s modulus and elongation at break were taken for comparison between materials.

Hydrolytic permeability test using PBS solution was done to study the hydration characteristic of the studied materials and relate it with their barrier properties. Rectangular test samples with a dimension of L= W=3cm was cut, oven dried for 1 hour at 50 °C to remove the moisture and immediately weighed to determine the initial mass. Next, the samples were immersed in the beaker containing phosphate buffered saline PBS solution and conditioned at 37 °C, which approximates human body temperature. The sample mass was recorded after every 7 days of immersion (until 4 weeks’ time). The hydration characteristic of each material was determined from the percent increase in mass after each weeks of immersion, using the following calculation:

Oxidative permeability test using H2O2 solution was done to study the barrier characteristic of the studied materials and relate it with their in vitro tensile properties. Rectangular test samples with a dimension of L= W=3cm was cut, oven dried for 1 hour at 50 °C to remove the moisture and immediately weighed to determine the initial mass. Next, the samples were immersed in the beaker containing hydrogen peroxide (H2O2) solution and conditioned at 37 °C, which approximates human body temperature. The sample mass was recorded after every 7 days of immersion (until 4 weeks’ time). The oxidative permeability of each material was determined from the percent increase in mass after four weeks of immersion, using the following calculation:

In vitro Tensile Properties of Host TPU and TPU Nanocomposites

Tensile testing was carried on the host TPU and nanocomposites upon 4 weeks of H2O2 exposure to investigate the effect of oxidative exposure on the mechanical properties of these materials. Figures 1-3 compare the average values of modulus of elasticity, tensile strength, and break elongation of samples after four weeks of this oxidative treatment. Among all the samples, 2HeD-C nanocomposite shows the highest value of modulus of elasticity. The neat TPU showed the lower value for modulus of elasticity but higher value for elongation at break as compared to the TPU nanocomposites. This shows that the incorporation of the nanofillers impart in increasing the stiffness and rigidity of the TPU matrix. Good nanofiller-TPU interactions would bring stiffening effect to the host TPU molecular chains Rao [5]. Furthermore, the incorporation of the modified hectorite into the TPU structure resulted in the lowering of its tensile strength, therefore it is suggested that the presence of organic surfactant brings catalytic effect for degradation of the TPU upon oxidative exposure.

Hydrolytic Permeability of the TPU/Organohectorite Nanocomposites

Changes in the weight of the neat TPU and TPU nanocomposites before and after exposed in PBS solution at 37 °C for four weeks were observed to determine the permeability of the materials. The increase of mass is assumed as a result of water permeability inside the TPU structure. From the data obtained as shown in (Figure 4), the water permeability of host TPU sample was the same level as the 2HeD-C nanocomposite but lower compared to other samples. This means that the water permeability ability of TPU was retained after the incorporation of 2wt% HeD-C nanofiller but increased with the addition of other types of nanofiller. This might be due to 2HeD-C organohectorite with dual modifications (DODMAC/CC) possesses the most hydrophobic characteristic, since the DODMAC has two long alkyl chains Osman, Andriani et al. [3,8]. On the other hand, 2HeE showed the highest water uptake in PBS solutions. This might be due to Ethoquad has the hydroxyl (OH) group in the structure, therefore it possesses the least hydrophobic characteristic Osman, Andriani et al. [3,8]. From the result, 2HeE-C shows the second highest increased in mass percentage. 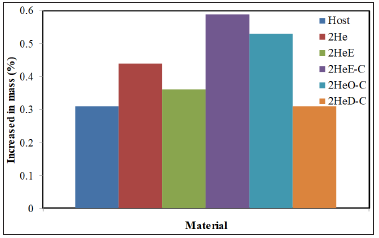 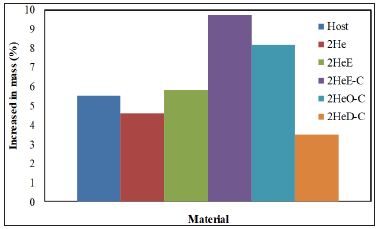 This might also due to the present of OH group in the Choline chloride structure. Oxidative Permeability of the TPU/ Organohectorite Nanocomposites (Figure 5) shows the effect of oxidative agent on the TPU nanocomposites. As stated by Heath, Cooper and Lawrie [9], most of the TPU materials are prone to oxidation especially the one contains polyether in the soft segments. The impermeability towards oxidative agent may hinder the oxidative degradation process in the TPU. In this experiment, the increase of mass is assumed as a result of oxidative permeability inside the TPU structure. The TPU incorporated with HeD-C shows the lowest increased in mass upon H2O2 exposure. This might due to the presence of more compatible organosilicate as nanofiller in the TPU matrix, which contribute to greater bonding and interface interactions between the nanofiller and the TPU matrix, thereby resulting in more tortuous path for the entering of the oxidants.

The PDMS/PHMO-based TPU nanocomposite incorporating organohectorite with dual surface modification system (most hydrophobic characteristic) has better in vitro mechanical properties than the TPU nanocomposite incorporating organohectorite with single modification. This could be associated with enhanced compatibility between the nanofiller and the host TPU as the TPU contains the hydrophobic siloxane chains in its soft segment structure. This led to enhanced matrix barrier towards oxidative and hydrolytic permeability.