Pyrexia, a complex physiological response triggered by infection or aseptic stimuli causes increase in Prostaglandin E2(PGE2)concentration in brain and later firing rate of neurones of thermoregulatory centre i.e. Hypothalamus. Majority attendance at paediatrician chamber are of children with pyrexia of varied origin and to calm the temperature at optimal level various therapeutics are in vogue but attendance of children with antipyretics adversity presenting as morbidity and mortality necessiated an evaluation of presenting hazards with consuming antipyretics.

Objective of Study: Analyse the rationality of Aceclofenac paracetamol combination, as antipyretics in paediatric practice. Material & Methods: Analysis of datasheet of patients admitted with antipyretics adversity at Centre For Children Disease & Research.

Conclusion: Acceclofenac sodium Paracetamol combination must be restricted for paediatrics use considering its dreaded outcome. 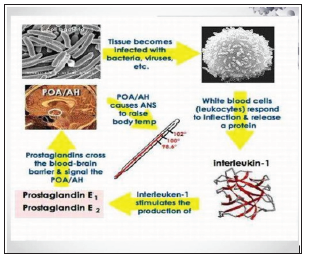 Pyrexia, a common clinical presentation of varied clinical conditions estimating 1/3 of all children visit to health care centre and parent usually self-medicate their children with the over the counter (OTC) antipyretics [1]. Fever is a beneficial outcome of the physiologic response triggered by infection or aseptic stimuli as it boost immunity against the invading pathogen, though beyond certain level it may cause discomfort and organic damage which usually presents with febrile convulsion [2,3] (Figure 1). Fever up to 1020 F is considered beneficial but >1020F become harmful and disastrous thus medication needed to keep the temperature < 1020F [4,5]. Fever result from an immune response mediated through the action of cytokinin on thermoregulatory centre of the brain or by conserving heat through vaso- constriction manifesting as Chills Or generating heat by active muscular contraction i.e.- rigor (Figure 2). During fever in addition to specific therapeutics the molecules usually prescribed is antipyretics and the commonly prescribed are - Paracetamol (Acetaminophen); Mefenamic acid, Ibuprofen and Nimesulide either alone or in combination with paracetamol, but these days Aceclofenac and paracetamol being commonly prescribed and sold as over the counter antipyretics in children [6-9]. 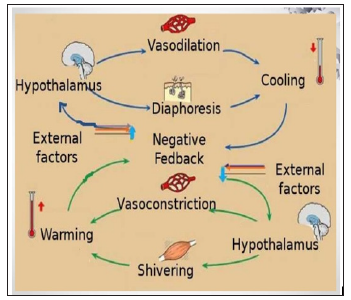 Fever may be suppressed by antipyretic or by physical cooling. During antipyretics prescription safety profile must be choice as majority of antipyretic are equally effective and their proper dose and administer schedule must be ensured [10,11]. Most antipyretics act by inhibiting the enzyme Cyclo oxygease and reduces PGE2 within the hypothalamus but may be due to reduction of pro inflammatory mediator, increased anti inflammatory signals or boost antipyretic message within the brain [12,13]. Usually village practitioner follow the prescription of qualified clinician and over the counter drugs are being used only when manufacturer come with these products with due permission from FDA. Availability of Aceclofenac sodium -paracetamol suspension being rampantly used for pyrexia in children. As drug formulation approval is the responsibility of FDA, this study is being conducted with an intent to assess the rationality of Suspension Aceclofenac with paracetamol as an antipyretic for children.

Objective of the Study

Patient’s parent or attendant were interrogated for therapeutics taken, its dose administration and appearance of the manifestation, clinically examined and investigated for haematological, hepatic and renal profile. Patients presenting with hypothermia, perspiration, hypotension, cardiac dysrhythmia unconsciousness and convulsion were treated accordingly.

Children consuming various antipyretics for relief of fever and attending at Centre for Children Disease Research were of age group < 1->5 years majority 614 (22.7%) patients of age group 4-5 years (Table 1). Out of all 1700 were male and 1000 female (Figure 3) Out of all 25% were taking Aceclofenac -paracetamol while 4.2% only paracetamol though 34% patients were taking Nimesulide & paracetamol (Table 2). Though nausea remain a common manifestation among all patients of varied therapeutic group, but manifestation like Dizziness, rash, GI bleeding, blood dyscariasis, convulsion, prolonged hypothermia remain more pronounced with marked albuminuria in patients taking Aceclofenac sodium - Paracetamol combination. Patients taking Aceclofenac paracetamol presenting with adversity like Dizziness, convulsion and sustained hypothermia resulted in an eventful fate i.e. mortality in 20 cases out of 674 but none of other group (Table 3). Onset of antipyretic effect was similar in all the groups sustained prolonged hypothermia was very common in patients consuming Aceclofenac sodium - Paracetamol than Nimesulide -paracetamol (Figure 4). 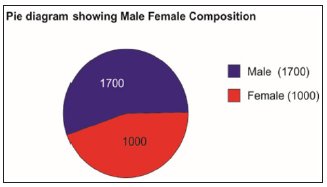 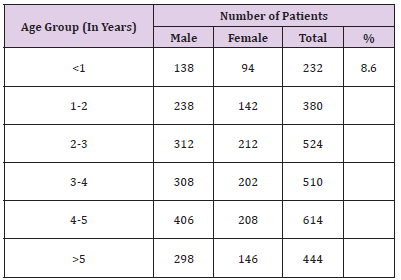 Table 2: Distribution of patients as per their therapeutics. 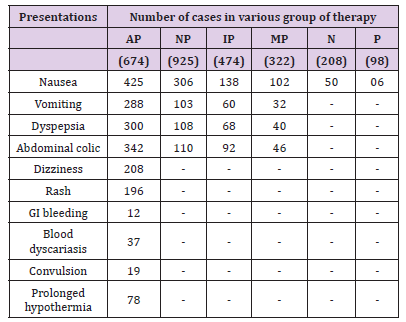 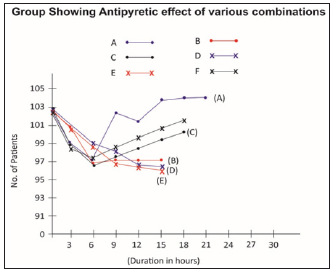 Antipyretic available shows equi anti pyretic effect for varied duration. Patients taking Acceclofenac- Paracetamol combination shows highest drug adversity in children than other anti-pyretic s, with dreaded toxicity like prolonged and sustained hypothermia resulting in morbidity and mortality, thus must be restricted its use as antipyretics.

Pyrexia remain a major cause of children attendance at Clinician chamber and majority comes with use of various over the counter antipyretics or treated by local practitioners. As to calm the fever use of antipyretic is an Ernest need but must be used with due caution as -Evaluation of data sheet of children presenting with fever of varied origin taking various antipyretic and presenting with sequel suggest pronounced drug adversity with Acceclofenac sodium -paracetamol combination than other i.e.- dizziness, rash, blood dyskaryosis, marked albuminuria, convulsion, sustained and prolonged hypothermia resulting in brain death. Most antipyretics act by inhibiting the enzyme Cyclo oxygenase and reducing the level of PGE2 within the hypothalamus but may be due to reduction of pro inflammatory mediators, increase anti-inflammatory signals or boost anti pyretic messages within the brain (Figure 5). 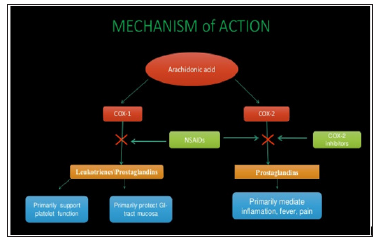 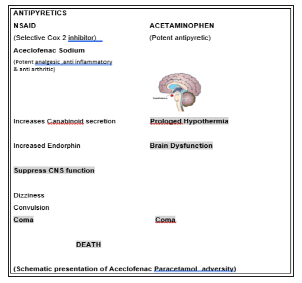 Considering the untoward effects causing morbidity and mortality with Aceclofenac Sodium -Paracetamol, its advocation in children must be restricted.