The Way We Deviate from Baseline Volume 11 - Issue 2

Inflammation can begin acutely or slowly. Inflammation accompanies a number of biological processes in pathology and physiology. The reason why we often conclude based on the rate of initial development of an inflammatory disease that we are soon to be restored to our basal conditions, safe and sound, remains unknown. Here, I present a hypothetical model of an ‘information’-generating system for the body and cell based upon an assumption that our immediate response to external stimuli consists of bodily and cellular responses. Upon the initiation of every stimulus, body and cell must deviate from baseline and then return to baseline. How much the body and cell can deviate from baseline is determined by the capacity of an ‘information’-generating system. The rate of increase in nitric oxide availability in a compartment may be a discriminating factor for the capacity of a cellular ‘information’-generating system.

Inflammation is manifested during the course of almost all disease states. However, in some cases, inflammation can be recognized as a physiological process. It seems quite difficult to clearly identify inflammatory processes as physiological or pathological. This identification is exemplified in angiogenesis, which shares many aspects with inflammation. Angiogenesis occurs in the yolk sac, preceding all other processes of organogenesis; it accompanies recovery from traumatic injuries, and it is an aspect of the pathology of diseases as a process toward or a component of complications. We cannot live a complete life if we avoid inflammatory processes. In general, there is a case for acutely beginning inflammatory diseases of a good and fast recovery when there is a benign nature of diseases; however, we do not have such an outlook in the case of slowly progressing diseases. Strangely enough, a reason why we do and do not remains unclear. It has to be of interest why the hope for a fine and fast recovery can be abandoned if an inflammatory disease begins slowly and why we can conclude, based on the initial rate of disease development, that the nature of the disease will remain benign. We must have automatically recognized a difference between acutely beginning and slowly beginning diseases that should be reflected in a difference in numerical values for variables functionally dependent on time at a given time point near the very beginning of an inflammatory disease. Our constant automatic reaction to every prognosis must have been long cherished and supported by the truth of Nature and must be a clue to unraveling a true mechanism that leads inflammatory processes to various destinations.

A. Bodily responses to extrabodily environments and

B. cellular responses to extracellular environments (ECF, extracellular fluid). Based on what we know about ECF, (A) and (B) must not be completely separated from each other and must remain paradoxically independent of each other. In (A), ECF plays a role as a simple buffer or homogenizer of the body. Upon every external stimulus, ECF becomes more informative in cooperation with the cells responsible for muscle contraction, secretion and metabolism and lets the information on bodily response be circulated throughout the body. In (B) ECF plays a role as an environment to cells. ECF remains unconcerned about letting cells sense how the body is responding to an external stimulus. Both body and cell have an ability to build an immediate response to a stimulus. Both body and cell must be gifted with the following. (F) a force to fix a baseline during adaptation to the environment.

C. The capacity to switch off the junction to baseline on its own and deviate (be dissociated) transiently from baseline and return to (be restored to) baseline. Both body and cell need a reliable inside trigger for taking off from the baseline. We cannot be confident that we act when facing a stimulus until the body and cell can generate ‘information’ (trigger) of their own.

A specific molecule produced by the ‘information’-generating system is required for bodily or cellular responses since a simple introduction and utilization of environmental molecule(s) as information means that information is shared between the environment and body/cell across membranes. Both body and cell must generate ‘information’ molecule(s) that an environment can never produce by itself. The molecule must not be a stranger to the body and cell at baseline. Body and cell cannot interpret a strange molecule as information since information must always bear messages to constantly compare a poststimulus condition to a peristimulus condition by measurements on a common scale. ‘Information’-generating systems for either body or cell must function under the following rules on every occasion.

a) Independence of a baseline-fixing system. Subordination to the baseline fixed.

b) Sure, start and compulsory termination on every external stimulus.

c) Consideration for the reserve capacity of the baseline of the body and cell.

d) No requirement in the body and cell’s own ATP while being produced at every start and termination.

All the biological processes in a living system are realized in chemical reactions. Probable reaction mechanisms under biological conditions and with a biologically significant rate of reaction are roughly divided into (a) and (b) or (and ()and are classified into (a x ), (a x, (b x ) and (b x 

a) A protein that can recognize a specific substance at a specific site is absolutely necessary.

b) Such a protein is not necessary. ( Homolytic cleavage of an electron-pair bond that can give rise to a species with an unpaired electron on the outer orbital is absolutely necessary.

i. Rates of reactions stay very low and remain almost constant from the moment immediately after the beginning.

ii. Rates of reactions initially increase with the greatest possible acceleration attained at the very beginning, and then the rates approach asymptotically to a constant.

iii. Rates of reactions increase robustly at the beginning and then suddenly fall to zero when either donors or acceptors of a single electron on the outer orbital are completely depleted, and acceleration time is usually much longer than deceleration time.

It is unlikely that (-1) participates with (-2) in a reaction occurring at the same site, in the same cell and with the same reactants. We cannot give an explanation based on the (-1) mechanism alone for the difference in a chemical basis between acutely and slowly beginning inflammatory diseases. It may well be true that a cell can choose one of (-2 i), (-2 ii) and (-2 iii) according to the condition during the start and termination of the ‘information’-generating system. Here, we face a question. How can a cell properly use three paths of the (-2) mechanism to start and terminate an ‘information’-generating system? What cellular factor can lead the cell to a condition where one of (-2 i), (-2 ii) and (-2 iii) is preferred? The question we face must be answered to unravel the truth.

Molecule Engaged in Terminating the System Through Negative:

Indole-2,3-Dione may be a Probable Candidate for Starting and Terminating the Cellular Mao-B System

All known endogenous I2-binding site ligands are formed through decarboxylation of large amino acids. These ligands include tryptamine, serotonin and histamine [1]. The ligands are expected to decrease with an increase in L-DOPA imported to the cells during stress, leading to a rise in MAO-B activity. The degree of activation may be higher for the cells located at the site of inflammation. Indole- 2,3-dione is also a known endogenous I2-binding site ligand1 with MAO-B inhibitory activity [2]. However, the quinonoid is quite peculiar since it is independent of any decarboxylase activities. The quinonoid is suspected of being formed oxidatively from large amino acid phenylalanine. Evidence has been accumulating that the quinonoid may be the actual product of MAO activity. The quinonoid is increased during acute stress in parallel with an increase in L-DOPA [3-5]. The quinonoid can participate in (-2 i), (-2 ii) and (-2 iii) under normal conditions (without inflammation) and in the case of slowly or acutely beginning inflammatory diseases, respectively (Figure 1). 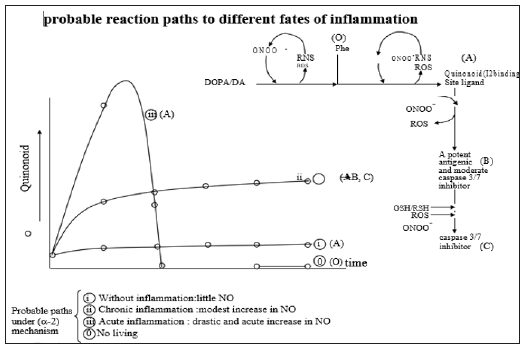 Figure 2: Schematic drawing of indole-2,3-dione and its derivatives. 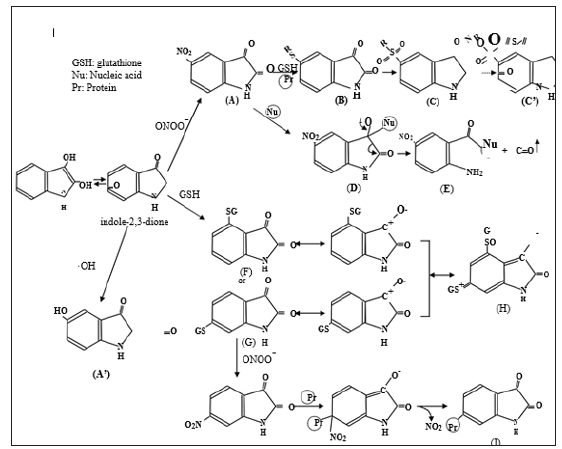