An Additional, Complementary Mechanism of Action for Folic Acid in the Treatment of Megaloblastic Anemia Volume 11 - Issue 2

Administration of supplemental folic acid addresses the impaired DNA synthesis causing megaloblastic anemia; however, despite the possibility of high doses of folic acid -5 to 15 milligrams (mg) daily for up to four months -the extremely rapid initial onset of action -30 to 60 minutes -when administered orally is not in keeping with the accepted mechanism, which can take up to nearly 22 hours, even under enzymatic control. This would suggest an additional, complementary non-enzymatic mechanism of nucleotide methylation at work; it is, therefore, proposed here, with in vitro evidence put forth, that rapid, non-enzymatic methylation by folic acid, via 5,10-methylenetetrahydrofolate and 7,8-tetrahydrofolate intermediates, of deoxyuridine monophosphate to form thymidylate using the cell membrane phospholipid phosphatidylcholine as a methyl donor, leaving de-methylated phosphatidylethanolamine, is a viable additional and complementary mechanism in helping reduce megaloblastic red blood cells to normal size and function.

Dietary deficiency of the vitamin enzyme cofactor folic acid (Figure 1) has serious effects upon human health, including chromosome breaks, birth defects such as neural tube defects, increased risk of colon cancer, brain dysfunction, and heart disease [1]. Its deficiency is also the cause of megaloblastic anemia, or megaloblastosis, an anemic blood disorder characterized by larger-than-normal red blood cells (RBCs), or megaloblasts [2]. Two hallmarks of megaloblasts are, first, elevated levels of the cell membrane phospholipid phosphatidylcholine (PC) [3] (Figure 2) and, second, increased amounts of the nucleotide deoxyuridine 5′-monophosphate (dUMP), which is otherwise usually methylated by the folic acid derivatives 5,10-methylenetetrahydrofolate and 7,8-dihydrofolate, via the thymidylate synthase enzyme pathway, which also includes the enzyme dihydrofolate reductase (DHFR), the coenzyme nicotinamide adenine dinucleotide in both its reduced and oxidized forms (NADH and NAD+, respectively), and the folic acid derivative tetrahydrofolate (THF), to deoxythymidine 5′-monophosphate (dTMP), or thymidylate, as part of normal deoxyribonucleic acid (DNA) synthesis [4] (Figure 3). 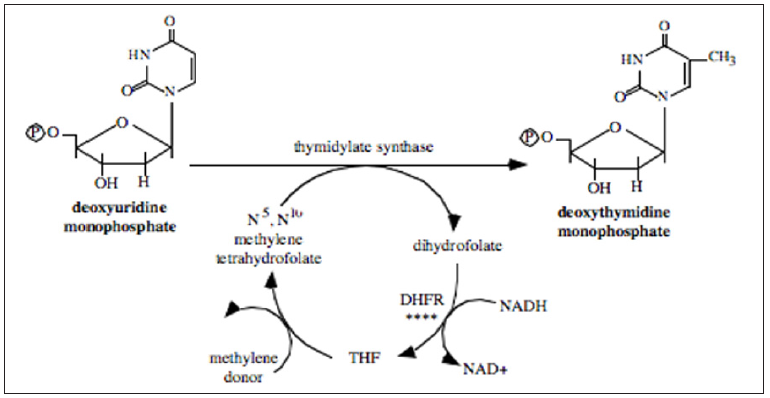 Administration of supplemental folic acid addresses the impaired DNA synthesis causing megaloblastosis; however, despite the possibility of high doses of folic acid - 5 to 15 milligrams (mg) daily for up to four months - the extremely rapid initial onset of action - 30 to 60 minutes - when administered orally [5] is not in keeping with this accepted mechanism, which can take up to nearly 22 hours, even under enzymatic control [6]. This would suggest an additional, complementary non-enzymatic mechanism of nucleotide methylation at work. Such non-enzymatic methylation of nucleotides has been observed previously in vitro with the metabolite cofactor S-adenosylmethionine (SAM-e) [7]; it is, therefore, proposed here, with in vitro evidence put forth, that rapid, non-enzymatic methylation by folic acid, via 5,10-methylenetetrahydofolate and 7,8-dihydrofolate intermediates, of dUMP to form thymidylate using PC as a methyl donor, leaving the de-methylated cell membrane phospholipid phosphatidylethanolamine (PE) (Figure 4), is a viable additional and complementary mechanism in helping reduce megalobastic RBCs to normal size and function.

All research was conducted at The Wellness Pharmacy in Winchester, VA, USA from February of 2018 through March of 2018. All sterile manipulations were performed using aseptic technique [8] in a NUAIRE Biological Safety Cabinet Class II Type A/B3 laminar flow hood. All pH measurements were made using a Horiba TwinpH waterproof B-213 Compact pH Meter. All Gas Chromatography/ Mass Spectrometry (GC/MS) data was obtained using a Hewlett Packard 5890 Series II Gas Chromatograph. Compounds were identified as the trimethylsilyl (TMS) derivatives by using the agreement of the retention times with those of standards as the criterion for identification and the following ions for determination: m/z 321.0488 for thymidylate [9], and m/z 255.13 for PE [10]. All in-laboratory photography was obtained using a Casio EX-Z57 digital camera. All Pyrex glassware was sterilized at 130° C for one hour [11] via autoclave using a Quincy Lab Inc. Model 30 GC Lab Oven. All chemical supplies were purchased from the Professional Compounding Centers of America (PCCA) in Houston, TX, USA.

All measurements of chemicals were standardized to 0.1 Molarity (M)5% using an Ohaus Analytical Plus electronic balance accurate to within  0.0001 gram (g). Final test and control samples were obtained via filtration through a sterile 0.2 micron (m) EPS, Inc. Medi-Dose Group Disposable Disc Filter Unit and corresponding sterile Monoject syringe. Three trials per step were performed and recorded and the data presented here represents the average of that total data. All data collected fell within a statistically acceptable  5% (p = 0.05) internal margin of variance [12] with no outliers. As a control, 25 milliliters (mL) of sterile 0.9% sodium chloride in water (normal saline (NS)), pH 7.4, was heated to 37 C° and maintained, with 0.45 g of PC (95% ± 5%) added and allowed to melt uniformly throughout (Figure 5). To this was added 0.015 g of folic acid (Figure 6) and the pH adjusted first downward to 2 via titration with 0.1 M hydrochloric acid (HCl), then upward to 10 via titration with 0.1 M sodium hydroxide (NaOH) solution. The pH was then adjusted back to 7.4 via HCl. As a test, to a second, similarly prepared mixture at pH 7.4 and 37 C°, 0.45 g of highly solubilized dUMP (95% ± 5%) was added (Figure 7), subsequent pH measured, and its contents compared to the first mixture (Figure 8). Two samples were procured from the second mixture for GC/MS analysis, one to test for the presence of thymidylate and one to test for the presence of PE. 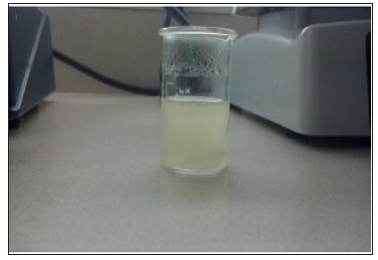 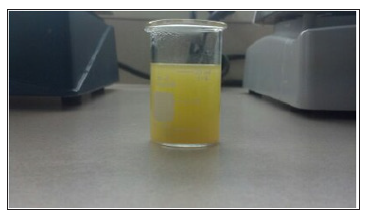 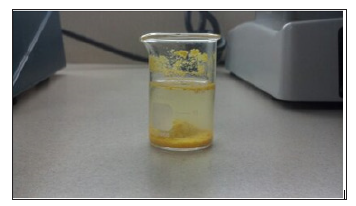 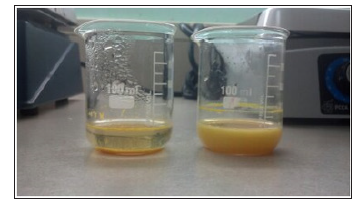 At physiologic salinity, pH, and temperature [13], no precipitation of any of the components of the control mixture was observed; furthermore, no precipitation was observed in this mixture as a function of pH within the stability range of a therapeutically relevant quantity of folic acid [14] and PC [15]. Precipitation, however, was observed in the test mixture, beginning immediately upon the addition of dUMP and reaching completion within 10 minutes after its addition. The pH of the test mixture was 6.2. Such precipitation, ruled out as a function of pH, indicated an increase in hydrophobicity, as would be the case if hydrophilic dUMP were being converted into more hydrophobic thymidylate [16]. Also, the change in appearance of the mixture from opaque to translucent indicated the conversion of PC into PE [17]. GC/ MS analysis confirmed the presence of both thymidylate (Figure 9) (95% ± 5%) and PE (Figure 10) (95% ± 5%). The mechanism at work here appears to be extremely rapid and non-enzymatic in nature. 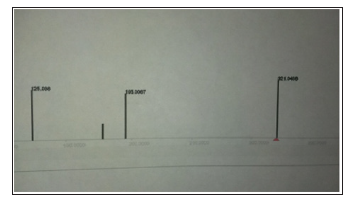 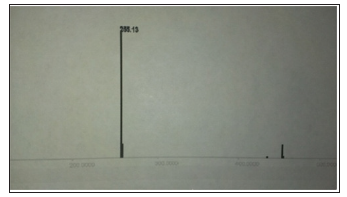 It most likely involves successive de-methylation of PC by folic acid to form, first, a 5,10-methylenetetrahydrofolate intermediate and PE, with the former then donating its methylene group to methylate dUMP into thymidylate, leaving a second, 7,8-dihydrofolate intermediate, which then quickly oxidizes back to folic acid. Such a supposition is supported by observations of these two intermediates’ formation by transient, acidic changes in pH by De Brouwer et al [18]. This transient nature, however, along with the extremely rapid rate of reaction observed in this experiment, precludes their detection here, although its inferred presence seems to best account for the observed results. Such a rapid, nonenzymatic mechanism would also account for the quick onset of action of folic acid therapy in the treatment of megaloblastic anemia, acting in an additional and complementary fashion with that in already elucidated enzymatic mechanisms. It also establishes folic acid, alongside SAM-e, as a powerful agent involved in the nonenzymatic methylation of endogenous nucleotides.