In the paper, a review of electropolishing processes is presented, beginning from a standard electropolishing (EP), through high-current-density electropolishing (HDEP, and high-voltage electropolshing (HVEP), being a commence of a new plasma electrolytic oxidation (PEO) process performed in concentrated 85% phosphoric acid (H3PO4). This work provides a several-decade history of developing the electropolishing processes, starting from simple surface finishing for obtaining roughness-free, bright and glossy metal surface, through a considerable progress in surface engineering in view of getting real advantages while applying it in medicine for biomedical parts, devices and implants. This review reveals how a big step was done by introducing the magnetic field into the process, with the name of magnetoelectropolishing (MEP). The most important features of MEP-treated metal/alloy parts is a big increase in corrosion resistance, substantial decrease of hydrogenation, huge increase in mechanical and fatigue resistance in cyclic bending, up to much better surface hydrofilicity, with improved biocompatibility.

The process of electropolishing (EP) has been developed for many decades now in view of obtaining shiny, bright and glossy surface on metals and alloys [1-5]. Some characteristic features of machine parts are usually obtained after EP [4-7] due to removal of surface roughness and formation of passive surface film on them, including possible changes in color [6]. Firstly it was considered as the process designed to improve surface finishing, much better than that gained after abrasive polishing processes [1,8]. During the years of studies it was found that not only surface roughness decay and gloss effects normally appear as the real effects of the EP process, but many more interesting features were revealed on the treated metal surface. They are generally an increase in corrosion resistance and a considerable improvement of mechanical properties of the treated parts [9-15]. In the anodic processes of electropolishing (EP) in acidic electrolytes, passive thin films revealing improved corrosion resistance are obtained [3-5, 11-22].

Mixture of concentrated acids is mostly used as the electrolyte for electropolishing processes, with some of them being proprietary and not revealed nor openly presented in literature. Low voltage (3-15V) is used for a standard EP and magneto electropolishing MEP processes performed generally on the plateau level [1,2,8,25,36]. For instance, for Nitinol a mixture of non-halogen acid with alcohol was used as the electrolyte at temperature 0 oC, the processing time for 5min, electropolishing voltage 10V, current density was above plateau-under oxygen evolution regime, Al as electrode/cathode material, with no agitation under EP, and whirling caused by a Lorentz force during MEP. Besides, high-current density HDEP (EP1000 and EP2000) [47,52-55], and high-voltage electropolishing HVEP (up to 450V) [56] processes were also studied, proving their usability for specific purposes, e.g. the HVEP disclosed the entrance to Plasma Electrolytic Oxidation PEO [64,65] in concentrated acids. Under a standard electropolishing EP on the plateau level, high-current density electropolishing HDEP, and magneto electropolishing MEP, the Nano-coatings on metals and alloys are formed. These Nano-coatings/films are characteristic with a variety of unique properties, concerning increased corrosion resistance in harsh environments and greatly improved important mechanical properties of parts for specific applications [57-63]. MEP additionally improves metal surface properties, fundamentally diminishes surface layer hydrogenation, and basically results in increased fatigue resistance of parts [27-34,42,43,45,46,59-61].

One of the most serious problems to solve was de-hydrogenation of the surface layer after numerous mechanical and electrochemical operations. The problem is of importance to avoid hydrogenation in titanium alloys (Nitinol) in implants, peripheral stents, needles, endodontic files and another medical device. The avoidance of hydrogenation is expected also in niobium used for superconducting radio frequency cavities, or electromagnetic radiation detectors, and in nuclear industries. Specifically, niobium as the alloying element improves the strength of the alloys, especially at low temperatures. Our recent studies performed on selected metals and alloys indicated consecutive lowering of hydrogenation, the highest noted in as-received (AR) samples of metals and alloys, some lower after 3EP, and the lowest in MEP samples [29,32,58,61,63]. The subsequent studies using secondary ion mass spectroscopy SIMS as well as glow discharge optical electron spectroscopy GDOES show that the depth of appearance and the amount of hydrogen content after MEP is very low, revealing only traces and/or decaying almost completely [61,63]. In some cases that de-hydrogenation may result also from a new electrolyte composition used for MEP of niobium [57] in comparison with that one used in Siemens process [66]. Our recent finding connected with the MEP process is a considerable increase of mechanical properties, specifically referred to the fatigue under samples bending. Over a decade ago, the Author noticed that during 180-degree bending (acc. to a Polish standard, 90 degree static bending) of a ϕ 2-mm titanium wire after EP the number of bends was about 3-4 cycles, whereas after MEP it was 7-8 cycles- in both cases until fracture. Next a similar behavior of samples was also found in case of stainless steels, and Nitinol (surgical blades and suture needle pushers) [57,59-61]. Nitinol surgical needles after MEP under composed bending (90º in one direction and 70º in reverse) revealed 3 to 5 times higher resistance to bending than those after a standard EP.

One example of biomaterials performance is presented in Figure 1. Displayed in Figure 1 implants come from a human body after a period of time they were inserted. In Figure 1a , the 316L stainless steel implant after a very fine finishing underwent corrosion in the harsh human environment. On the other hand, in Figure 1b a fatigue breakage is visible to occur in a very similar stainless steel implant. Our solution to prolong the life of this type of implants is the change of biomaterial used (say into a titanium alloy), and the advice for final surface finishing by MEP. A variety of measurement techniques were used to study Nano-coatings after EP, MEP. They are: scanning electron microscopy with electron dispersive X-ray SEM/EDX, Auger electron spectroscopy AES, X-ray photoelectron spectroscopy XPS, X-ray/grazing incidence diffraction XRD/GIXRD, glow discharge optical emission spectroscopy GDOES, secondary ion mass spectroscopy SIMS, atomic force microscopy AFM, contact angle measurement CAM electrochemical impedance spectroscopy EIS, 2D and 3D surface roughness studies with Ra and Sa parameters noted, nanoindentation measurements, fatigue resistance testing, and others.

a) corrosion visible on the 316L surface, 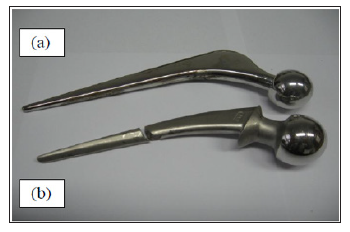 In conclusion, MEP effects in comparison with the samples after EP are: lower roughness and passive film thickness, advantageous film composition with a modified compact structure, higher corrosion resistance, increased resistance to cyclic bending of part, until fracture. Interestingly, a huge increase in mechanical resistance to fracture is one of the most unexpected features of parts after that kind of metal finishing [32,57-61]. It may be connected with the decrease in surface roughness, thinner film with modified composition obtained after MEP, and general diminishing of hydrogenation in comparison with the same samples/parts after a standard electropolishing EP.

Medicine Doctor Andrzej Hryniewicz, Chief Consultant and Vice-Supervisor of Surgery of Regional Hospital in Kołobrzeg, Poland, is highly thankful for delivering examples of the implants, presented in this paper. The used implants were acquired from patients during surgery.