Background: The aim of this study was to investigate the level of estrogen receptors (ERs) and progesterone receptors (PRs) of the human endometrium and myometrium in physiological and pathological states. Endometrial cancer and myoma represent some of the prevailing diseases of the reproductive system in women, affecting 6% of the adult female population.

Conclusion: The increase of both ERs and PRs reveals endocrine-dependent benign processes, while the decrease of PRs and especially the decrease of the PR/ER ratio indicate disease pathogenesis in the endometrium.

Both endometrium and myometrium are sensitive to sex steroids - their structure and function depend to a large extend on the hormonal balance [1-3]. It has already been shown that the level of receptors in the human uterus is variable and depends on the endocrine state at a given time. The amount of progesterone receptors (PRs) peripheral to the center of myoma nodes is known to be lower during the proliferative phase of the menstrual cycle than in the secretory phase [4]. It is hypothesized, that the steroid regulation in the myoma nodes through proliferative activity is modulated through alterations in the number of PRs [5,6]. The leiomyoma is a benign smooth muscle tumor of fibroid tissue that is usually not considered to be premalignant. Despite being found in any organ of the body, leiomyomas occur mostly in the myometrium. Uterine leiomyomas develop and grow during the reproductive years and their size diminishes after menopause, which demonstrates dependence on the ovarian steroids. It is suggested that sex steroid hormones promote development of leiomyomas by stimulating the expression of growth factors.

Estrogen and progesterone regulate gene expression by activating transcription factors in the nuclei and thereby regulate genes responsible for cell growth. Nonetheless, the factors involved in the development of the leiomyoma are still controversially, although studies indicate that its growth is mostly dependent on the production of the female hormone estrogen [7]. It seems that a hormonal imbalance, i.e. elevated estrogen and probably progesterone levels, is the most important underlying risk factor for the development of fibroids. Although clinical and biochemical observations traditionally support the view that estrogen plays an important role in the development of leiomyomas, recently, increasing evidence seems to suggest an involvement of progesterone in the pathogenesis of leiomyoma as well [8-10] - the results of large clinical trials seem to suggest that progesterone and its receptors promote the development and growth of uterine fibroids [11]. Recent data suggest that the relative expression and availability of estrogen receptors (ERs) and PRs may be involved in the modulation of gene transcription activity in leiomyoma [12,13]. In the context of breast cancer, qualitative assessments of ERs and PRs of the respective malignant tissue have already been performed.

The results of these studies indicate that the levels of ERs can serve both as a marker of hormonal activity and possibly as a risk factor for the occurrence of breast cancer, since ER-positive breast cancer is the most common type of breast cancer [14,15]. Endometrial cancer is the most common gynecologic malignancy, and accounts for 6% of all types of cancer in women. Risk factors for the development of endometrial carcinomas include hormonal imbalance, diabetes, obesity and reduced physical activity [16]. Some studies have linked endometrial adenocarcinomas with a lower expression of the estrogen alpha receptor, and a higher expression of both progesterone receptors and estrogen beta receptors, as compared to endometrial spontaneous tumors [17]. An increased incidence of endometrial cancer has been linked to prolonged estrogen exposure [18,19]. Combined estrogen and progesterone therapy can reduce the risk of endometrial cancer that is associated with unbalanced estrogen use. While the role of ERs and PRs in breast cancer has been extensively studied, only few studies have assessed the influence that these receptors pose on the myometrium; albeit such investigations could be useful in the development of new treatment options. The goal of the present study is to assess the level of ERs and PRs in the endometrium and myometrium under normal and pathological conditions in postmenopausal women.

The study was approved by the institutional review board of the Alexander Hospital, Sofia Medical University. All participants provided written informed consent. All patients were menopausal, and the mean age was 55 years. The earliest onset of the menopause, within the group of participants, was 43 years. All four groups of patients suffered from no other diseases/illnesses except the respective pathological condition and did not show any signs of obesity or symptoms of diabetes. The patients did not receive any hormonal treatment during the observation period. Histological samples (biopsies) were collected from the endometrium and the myometrium of both normal and pathological (endometrial carcinoma, respectively myoma) conditions. Myomas were collected from the uterus and ranged in size from 1 to 5 cm. All samples were fresh frozen by placing them immediately into liquid nitrogen (temperature -196 °C). For biochemical analyses, the tissue samples were placed into ice, and all further manipulations were carried out at a temperature of 4 °C. Homogenization of the tissue was carried out three times for respectively 5 s, 15 s and 45 s on a Politron-PT-K device in buffer (10mM Tris-HCl, 1.5mM EDTA, 10mM monothioglycerol, 10% glycerol and 0.01% NaN3), pH 7.4. Centrifugation was conducted three times, according to the following protocol:

a) Centrifugation at 3.000rpm for 15min. Supernatant was collected and the adipose tissue was removed;

b) Centrifugation at 15.000rpm for 30min. Thereafter the supernatant was collected, and the adipose tissue was removed;

Supernatant was collected, and the protein level was measured according to the method of Lowry. For the assessment of estrogen receptors, a synthetic estrogen (mochestrol-11-β- methoxy3H) with specific radioactivity 87 Ci/nmol in decreasing concentrations: 4nmol/l, 2nmol/l, 1nmol/l and 0.5nmol/l (New England Nuclear), was utilized. For the assessment of progesterone receptors, synthetic progesterone (promegston-17-methyl3H) with specific activity 87Ci/nmol (New England Nuclear) in decreasing concentrations: 6nmol/l, 3nmol/l, 1.5nmol/l and 0.75nmol/l, was utilized. The separation of free and bound progesterone receptors was carried out with dextran-coated charcoal. The amount of hormone receptors (fmol/mg protein) were biochemically assessed according to the analysis of Scat chard. Statistical analysis - Data were analyzed by Statistics Toolbox 5.2, Descriptive Statistics (The MathWorks, Inc. Natick, MA). Results were expressed as means ± SEM. The statistical significance was determined by the Student’s -test. P values of less than 0.05 were considered statistically significant. 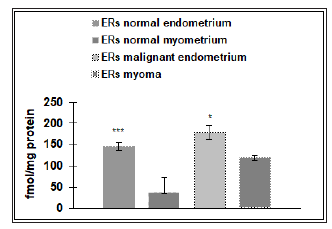 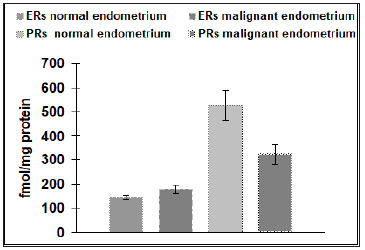 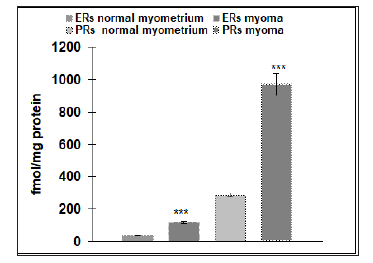 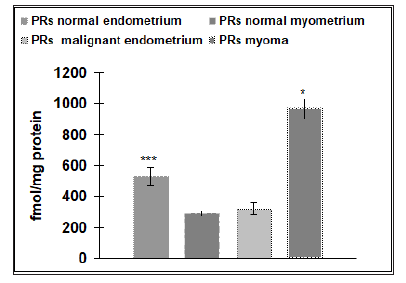 Both myometrium and endometrium express PR and ER, being targets for the respective steroid hormones. Scat chard analysis is a classical biochemical method for the evaluation of the level of ERs and PRs. Our results suggest that the number of ERs and PRs in the physiological endometrium and myometrium correspond to the data obtained by other authors [3,20]. The increase of ERs and PRs in the myoma indicate endocrine dependent benign processes as well as malignant pathogenesis in the endometrium of postmenopausal women. Traditionally, estrogen has been considered a catalyst of myoma growth due to its proliferative effect and because it induces the synthesis of ER. Our results similarly reveal an increased level of ERs in myomas. Earlier studies have already provided evidence for an increased concentration of ERs as compared to those found in autologous myometrial tissue [8]. Based on these insights, Adam et al. have suggested that receptor hypersensitivity to estrogen may be important in the pathogenesis of myoma [8]. Our results furthermore reveal an increase of PRs in myomas, which is in accordance with recent data showing an increased PR mRNA expression [12], as well as increased PR protein levels in myoma tissue, as compared to adjacent myometrial tissue.

Although estrogen has traditionally been considered as the primary promoter of fibroid growth, laboratory animal and human data suggest that progesterone, in the context of normal estrogen levels, may also play an important role [5]. It has been suggested that progesterone, progestin and PRs stimulate mitotic activity and promote myoma proliferation [12]. PRs in uterine fibroids have protumorigenic effects that are modulated by autocrine and paracrine signaling [11]. Another hypothesis considers the possibility that estrogen-induced expression of PRs is another cause for myoma growth [13]. The activation of PRs may stimulate local growth factor production and growth factor receptor production [21,22]. Harrison-Woolrych et al. [21] reported that epidermal growth factor (EGF) mRNA production in myomas is increased only during the secretory phase of the menstrual cycle, which suggests that progesterone, and not estrogen, is the major mediator of myoma EGF. Expanding our knowledge of the biologic characteristics of myoma may facilitate further advances in the clinical management of these common tumors.

PR and ER assessment either by biochemical or immunochemical methods should be included in the treatment plans for endometrial cancer [8,23,3]. Earlier studies have evaluated the level of PRs and ERs in cells during the phases of the menstrual cycle and have revealed a cyclic change of the number of receptors during the preovulatory and postovulatory phases [24]. The decrease of the ratio of PRs/ERs observed in our experiments corresponds to the results observed by Joanne [24], who reported the ratio of PR/ER, and showed that in healthy persons during the proliferative phase this ratio is 7.9 in the endometrium, while patients with carcinoma exhibit a decrease to 2.28. In our observations healthy persons exhibited a ratio of 3.6, while it decreased to 1.8 in s in patients with carcinomas. This comparatively lower ratio in our experiment is due to physiological characteristics of our included patients, which included only menopausal women with a decreased estrogen and progesterone state. The role of estrogen and progesterone in the pathogenesis of endometrial cancer remains controversial. According to some studies, estrogen modulates increased ER levels but decreases PRs, while some authors suggest that estrogen increases PRs as well [5,7,25]. Our observations revealed an increase of ERs, due to a stimulating effect of estrogen, while PRs decrease in endometrial cancer due to the lower level of progesterone.

Our results therefore concur with earlier studies, which linked endometrial cancerogenesis to an overexpression of estrogens that is not balanced by progesterone and other steroids [11]. Estrogens can thereby bind to ERs, initiating gene expression, and furthermore increasing the mutational rate by simulating cell proliferation [11]. Nonetheless, additional investigations are needed for a clear understanding of the clinical importance of the level of ERs and PRs in endometrial cancer. The results indicate that while increased levels of ERs and PRs in the myometrium can be ascribed to benign endocrine processes, decreases of PRs and particularly of the PR/ER ratio in the endometrium can be indicative of pathogenic alterations in the endometrium of postmenopausal women. Our study could therefore be helpful in the search for improved strategies for the prevention and treatment of uterine tumors.